Before I take you back to our garden where the day lilies are now blooming in profusion, I wanted to celebrate a striking monument I found on my drive up to Georgian Bay the other day.  This is the monument to the Kemble Women's Institute - now, believe it or not, the oldest operating Women's Institute in the world! 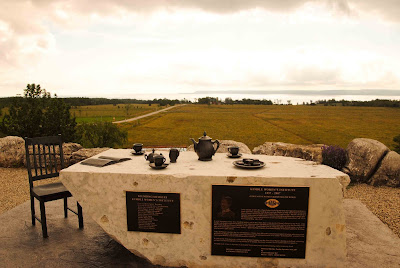 The monument takes the form of a huge slab of limestone set up as a table, with a chair at one end - I'm sure reminiscent of many Women's Institute meetings.  The Kemble Women's Institute was formed in 1897, the third in the world, and is now one of some 500 in Ontario alone.  There are 9 million members worldwide.  Here the monument is located at a lookout on the upper edge of one of the bedrock escarpments that run up each side of the bay, providing a beautiful view. 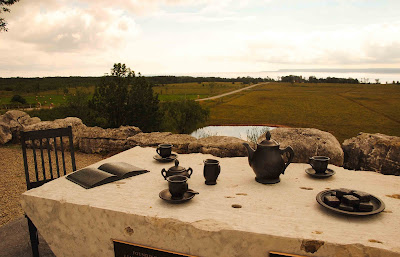 While the plaque gives the information, the unique setting of the table is what struck me as memorable.  As the last line of the plaque says, "The table is set.  Come sit and ponder .... making a better community for all". I'm sure that my own mother and both my grandmothers, and probably numerous aunts were members of a nearby Women's Institute, working to make their contribution to their own local community. 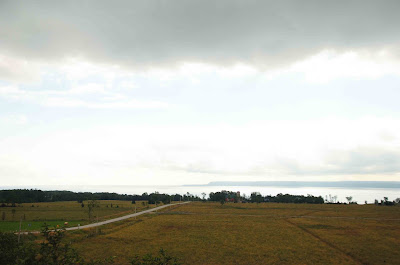 The view itself is spectacular, although it was grey clouds early in the morning when I passed by.  You're looking east across Owen Sound Bay, a narrow bay off the much larger Georgian Bay, across to 'Coffin Hill', one of the many outcrops of the Niagara Escarpment that is such a striking feature of the landscape in this part of the province.