After we spotted that remarkable osprey nest we continued on to visit a lavender farm, 'Flowers to Fragrance', just west of Mount Forest, Ontario.  Now let me caution you right up front!  This is not southern France with rolling fields of lavender!  Some varieties won't even grow here, and those that do are at the limit of their range.  Never-the-less, I was still fascinated with this as a 'farming' operation. 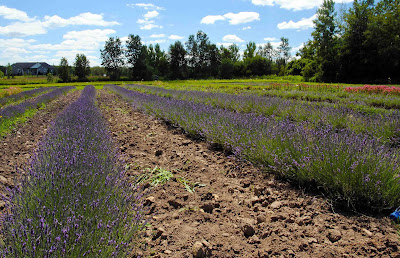 You're greeted by a small lavender field right at the entrance to the farm, just behind the sales building which welcomes you.  Some has already been harvested at this point in the summer, and the super hot weather we had last week was apparently ideal for that.  But these rows of lavender in bloom looked beautiful. 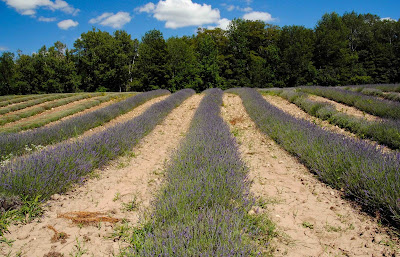 We walked all the way to the back of the small farm, to see more fields, and learn about how it was grown.  Lavender likes sandy, gravelly soil (so it's a challenge to grow it in our garden, which is all clay!), so this gentle gravel slope was ideal for it.  The rows that show up in the far left corner of the field have already been harvested; these rows are next.  Even if you weren't harvesting it as a crop, clipping it short in the late summer is important for continued growth. 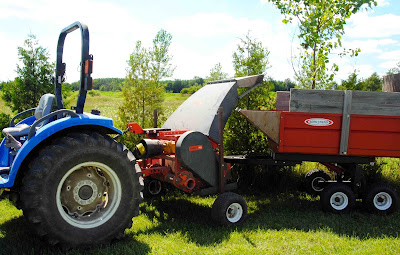 This cut and harvest the lavender with this modified harvester imported from Australia.  A blade low to the ground cuts the lavender, and it's blown into the small wagon.  They only harvest 3-4 rows at once, because that's the amount that can be processed in the distiller. 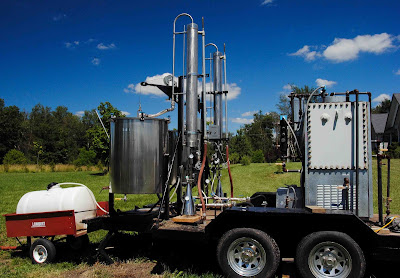 And this is the distiller, the heart of the operation, mounted on a trailer for convenience.  The harvested lavender is placed in the large steel drums on the left, while hot water is heated to steam by the boiler in the box on the right.  Steam is fed through the bottom of the lavender drums, and rises, taking the moisture in the plants and flowers with it.  Separate cold water is run through the two cooling towers, so as the steam enters at the top it condenses as essential oils and as hydrosols.  The latter (moisture from the plants themselves) is collected in the large white tank to the left, and used as the basis for a number of 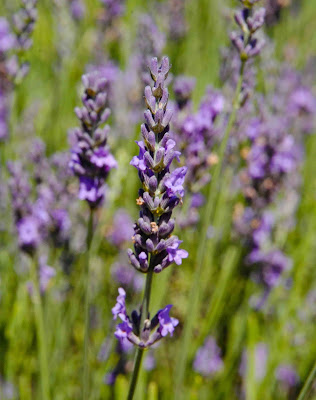 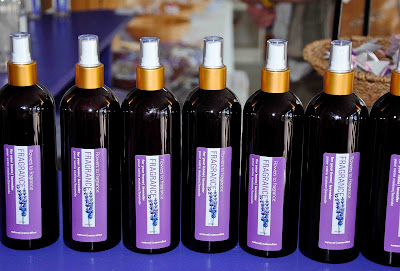 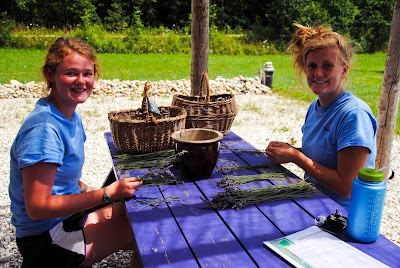 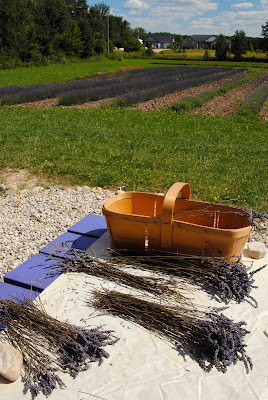