I've always been intrigued with the huge number of different grasses, but unable to sort them out.  The past few weeks I've been collecting some pictures of grasses in flower in our own meadow, in the hopes of starting to learn to identify them.  And the tiny flowers are themselves fascinating. 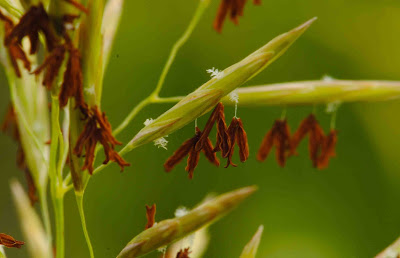 I think this may be smooth brome grass.  In this picture you can see both thestigma (the tiny white feather-like parts), and the anthers (the brown parts), hanging on a thin filament.  If I have the terminology right, the anther and filament make up the stamen. 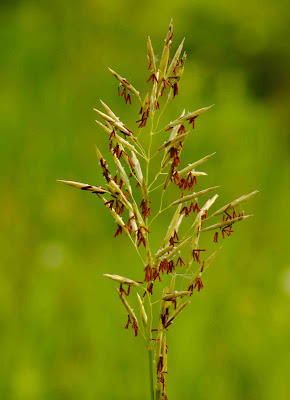 This is what the entire upper part of the plant, or what botanists call the 'inflorescence' looked like, quite large and full of flowers on this day.  Getting grasses to stop blowing in the wind is the biggest challenge in photographing them! 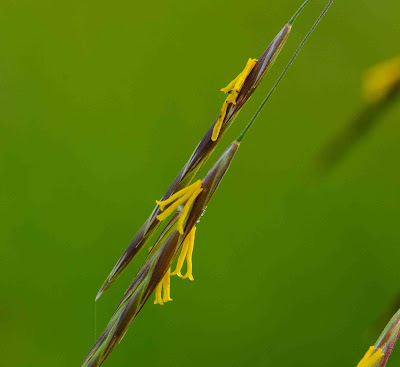 A very similar grass, perhaps another brome grass, was this one, except that it had bright yellow anthers.  This picture shows two 'flowers', covered with outer bracts or 'glumes', with the anthers poking out from them. 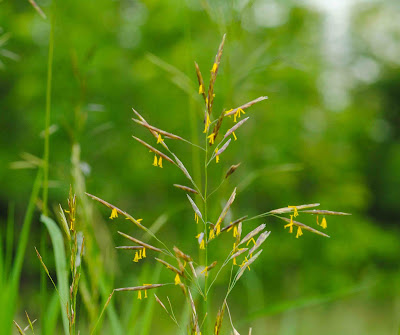 The inflorescence was similar to the first one above, large and spread out when mature - and again blowing in the wind.  Several blurry shots were discarded in favour of this one.  I believe that both of these are brome grasses, but I haven't been able to find any information about the different in colour of the anthers. 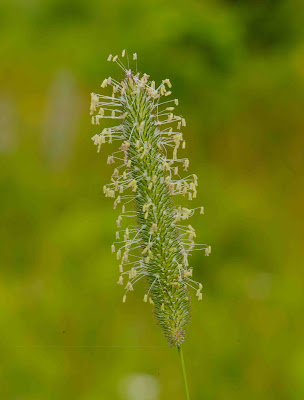 Timothy is probably the easiest grass to identify, a dense inflorescence that does not spread out from the stem at all.  Who hasn't pulled a stem of timothy to chew on?  Here it's in flower, covered with tiny slightly yellow florets. 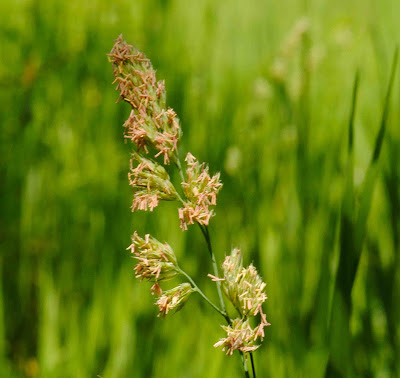 Another fairly easy one is orchard grass, with a dense and heavy inflorescence that separates somewhat into several chunks of flowers, here also in bloom with light brown florets. 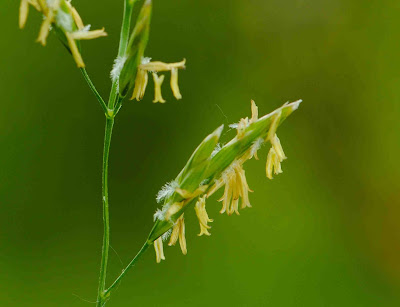 Another smaller grass had paler yellow florets.  Here both the white feather-like stigmas and the light yellow stamens are visible.  I think this may be meadow brome grass. 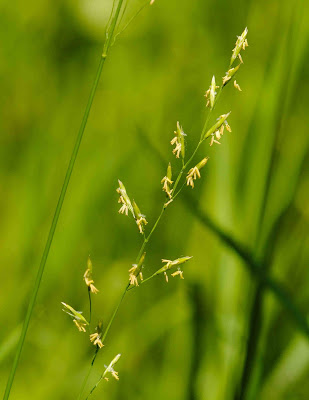 The inflorescence of this grass was fine and spread out, but fairly small, not nearly as large as the first two above, and shorter overall. 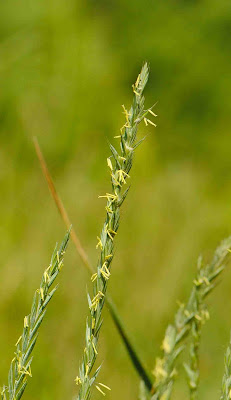 A final grass was this one with an inflorescence that has separate flowers, but they do not separate themselves from the stem at all, remaining tightly clinging to it..  It matches a description of tall fescue.

Anyone who can direct me to correct names, on-line identification sites, or guide books that will aplly to southern Ontario and will help me move ahead, please comment!  I'm posting this to 'Macro Monday2'.
Posted by The Furry Gnome at 8:39 PM

Email ThisBlogThis!Share to TwitterShare to FacebookShare to Pinterest
Labels: Grasses