Weather forecasters seem to be coming up with more and more exaggerated terms to describe our weather forecasts.  We have weather bombs, catastrophic driving conditions, historic records, and dangerous commutes.  There's some truth in all of them, and I learned yesterday that there's actually a technical definition of the term 'weather bomb', something to do with pressure differences between the upper and lower atmosphere.

It's a common comment in the weather news that climate change is leading to new extremes, not just overall warming of the planet.  The 'polar vortex' ( I thought that used to be just the jet stream) is bringing more arctic air further south and mixing up what used to be our 'normal' winters.  At any rate, today we have a messy mix of freezing rain, ice pellets and now snow.  It's the freezing rain that's most dangerous, and we're hoping for better driving conditions by morning.

But it was the ice pellets which got picked up by my wheelchair tires that caused the most trouble for me.  When I came inside they started to melt of course, and that meant I had to sit for an hour on the mat before I was dry enough that I could move.  And if the snow continues to accumulate out there things will look pretty white by morning.

I've watched the weather forecasts all week as we went from an 'unprecedented' low pressure system in the north Pacific, through 'unheard of' snow in northern California, evolving into a 'dangerous' Colorado low, to Ontario's 'weather bomb'.  In this case it's all come true.

I have just figured out a way to email selected photos to myself and then download and save them on my newly repaired desktop!  It is not intuitive at all, and you have to plunge onward ignoring what appear to be simple on-screen instructions that don't actually work, but I persevered and eventually got 2 photos from the other day and one from an hour ago downloaded and then uploaded into the blog, so here they are.  Even better, you can edit them in this process, perhaps more easily than in Lightroom.  I'm back to being a happy camper. 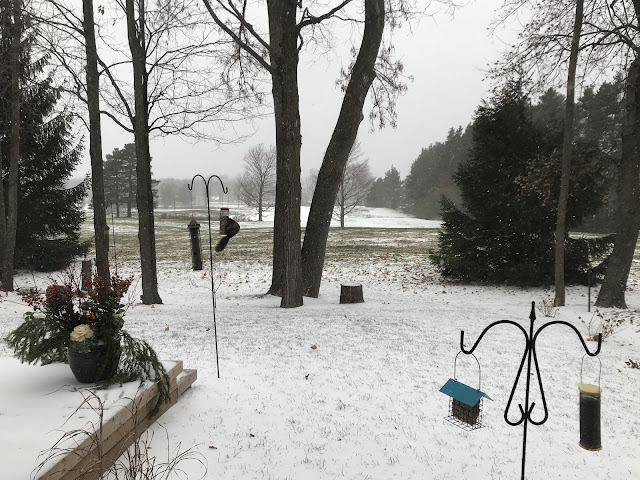 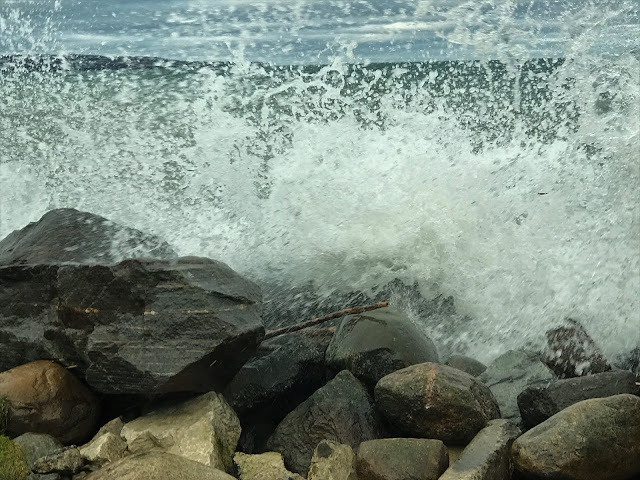 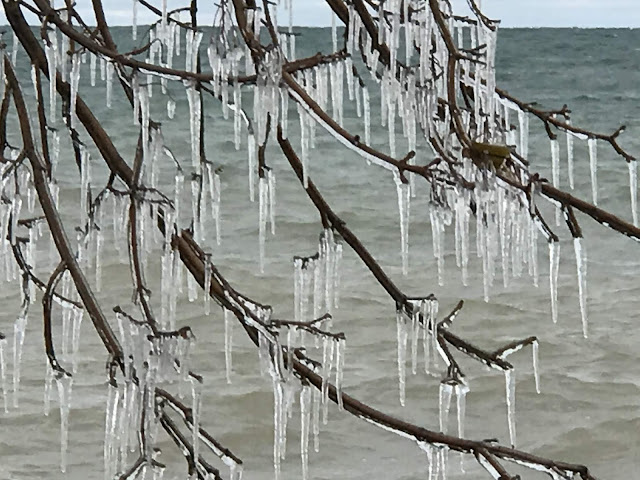 We've had a lot of severe shoreline-damaging waves with each storm.  Both the town and private shoreline owners are going to have to spend a LOT of money fixing things up - and the water level is forecast to be higher next year.  Here the waves are splashing up on the shoreline boulders leaving a few shoreline trees dripping with ice.