The second hike I took that December four years ago, when the snow refused to come, was a long walk with a friend around the Bruce Trail loop up on top of Blue Mountain.  It was a challenging but interesting walk for me - though I'm really only now coming to understand the geology properly.  This is also a popular winter snowshoe hike, starting and ending at the left hand circled 'P', with plenty of safe parking and a largely flat trail. 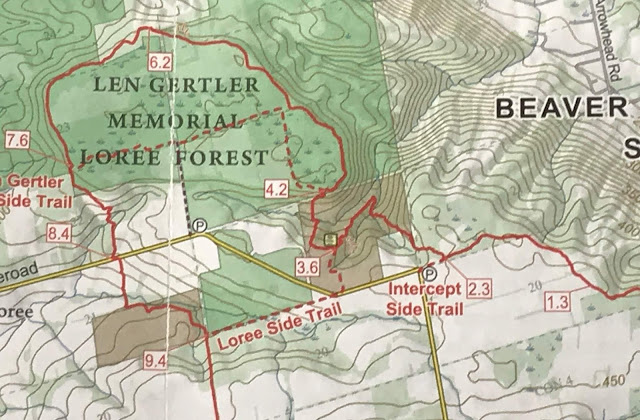 This is the Bruce Trail map showing Loree Forest, the large green patch in the upper left known as the Len Gertler Memorial Forest (Len was one of the 'fathers' of efforts to protect the Niagara Escarpment 50 years ago).  As you can see the trail forms almost a loop and we walked from the road in the lower centre all the way around to the road about a mile to the west.

The green area is public land and the brown patches are owned by the Bruce Trail Conservancy.  If you understand contour lines you can see the dramatic difference between the flat top of the plateau where we walked and the steep slopes of the downhill ski slopes to the right. 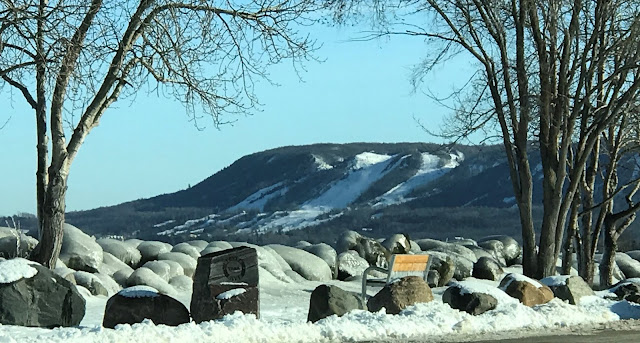 The same high hill is known as 'Blue Mountain', and most people only know it through the view from below, here from Thornbury harbour.  Those are the ski runs of Georgian Peaks Ski Club which we will see from the top in a moment or two. 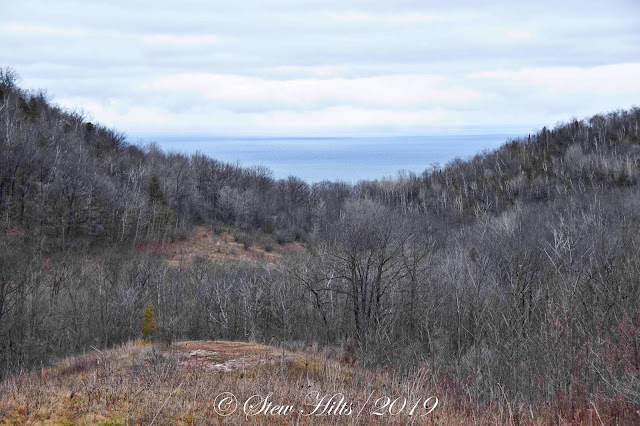 We first stopped at a long narrow 'hogsback' where the trail comes to a sharp point and took in the view of the bay.  Here the slopes have eroded deeply and quickly into the Queenston Shale geological formation, ideal slopes for ski runs. 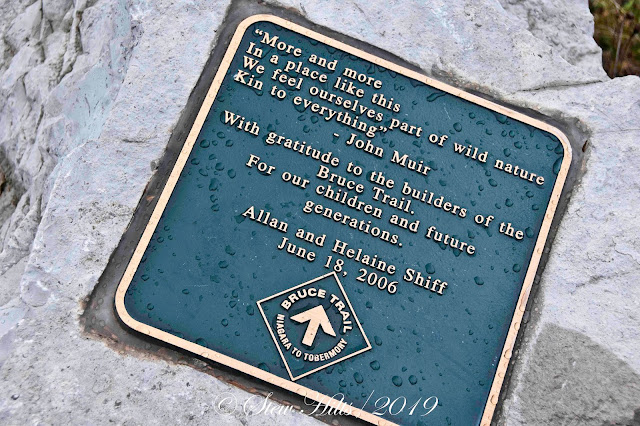 The Schiffs donated part of this property to the Bruce Trail. 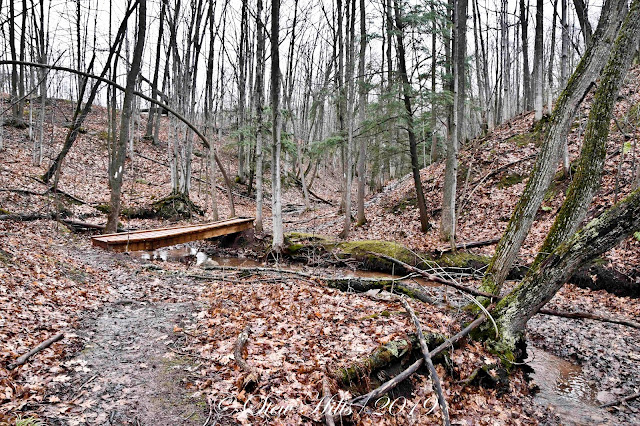 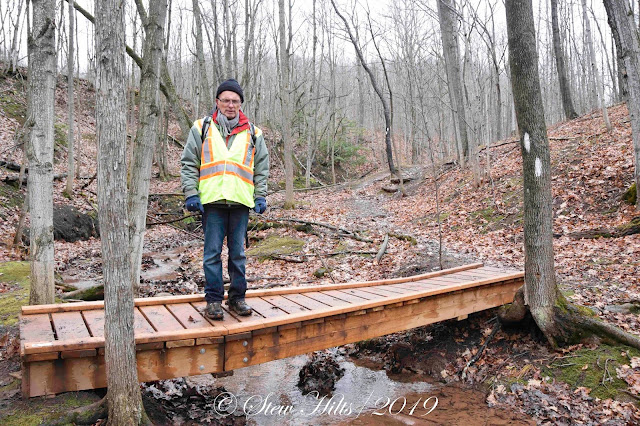 After that we were off on our hike, first crossing a small creek on a new BT bridge. 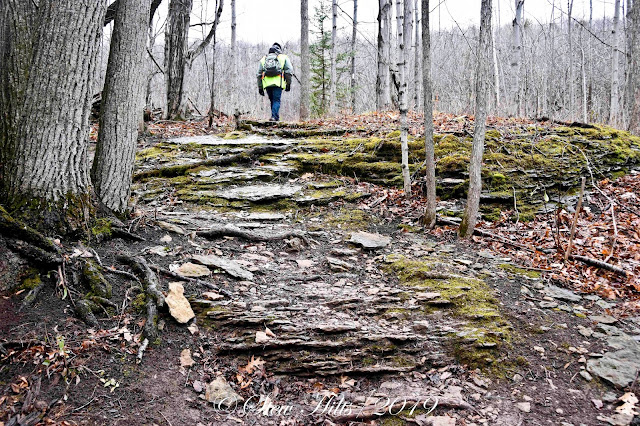 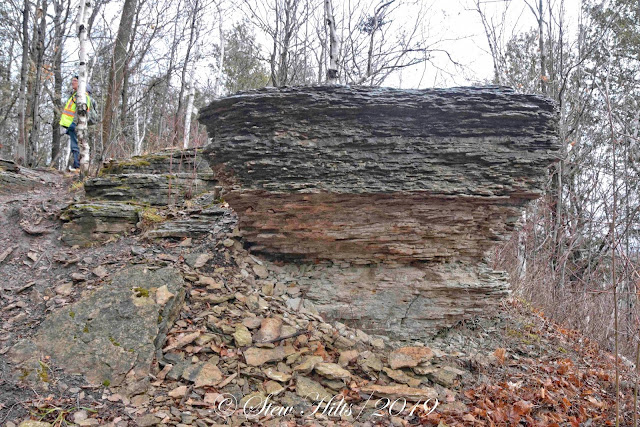 Geologically this is the Manitoulin formation, a dolostone formed of very thin layers laid down in a tropical see about 430 million years ago.  It's not the top of the Niagara Escarpment as most people know it, but a middle layer geologically - though it forms the top here. 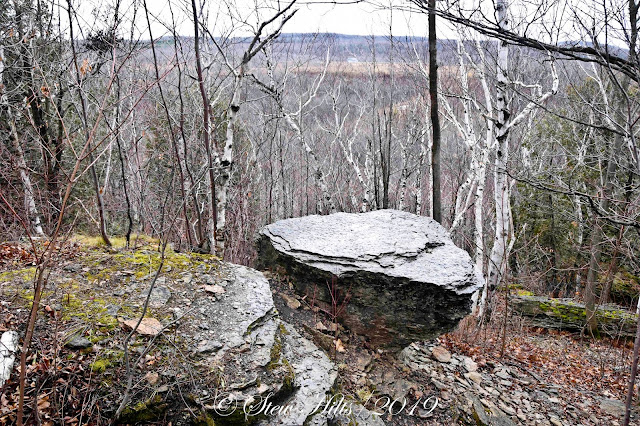 We emerged out on top of the very flat Loree Forest plateau, the area known as Blue Mountain.  I find it interesting that there's a widespread image of 'Blue' being the highest point of the Niagara Escarpment whereas in fact the top layer of the escarpment, the 'caprock', the tall hard Amabel Dolostone cliffs, is entirely missing here.  The highest point on the escarpment, and the closest outcrop of the Amabel formation, is actually over 4 miles to the south at Scenic Caves.  So geologically, Loree Forest is an unusual outlier of the escarpment when you look at the big picture. 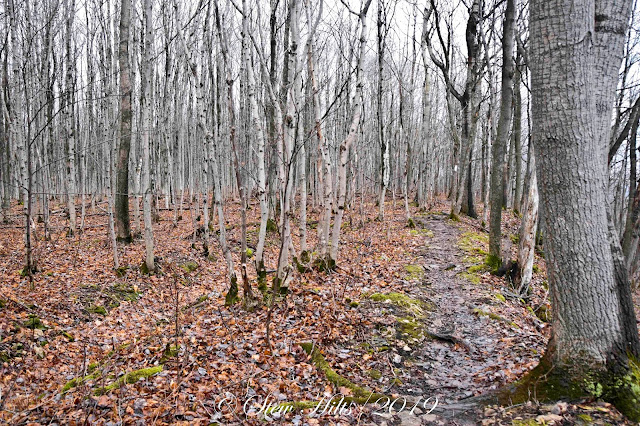 At any rate, we carried on through a very flat forest of second growth White Birch, the steep slopes heading downhill on our right.  Occasionally you could see the bay through the trees.  When you see a forest this uniformly young here you can assume it was once cleared for farming, though with bedrock more or less at the surface, I'm not surprised the farming didn't last.

It was quite a long walk, but eventually we came out to the top of those ski hills I showed above, the top of Georgian Peaks.  The steep part is over the edge down there. 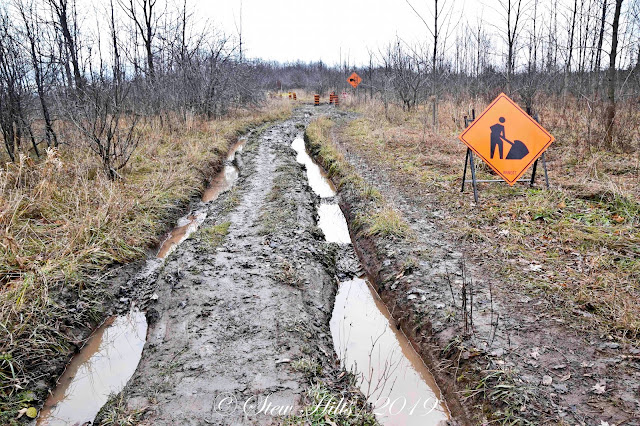 Here we saw the evidence of two serious problems that happened that year.  An 'adventure' company was offering heavy duty jeep rides, creating deep ruts along the trail, and arguing that there was a public right-of-way so they had the right to be there.  At the same time a serious landslide occurred on one of the ski slopes.  They had to bring trucks and equipment in from the top to fix it.  So what we found was a construction road crossing the trail, which itself had been churned up by the big jeeps. You'll be glad to know that the landslide was fixed and the local council voted not to allow the adventure jeep rides. 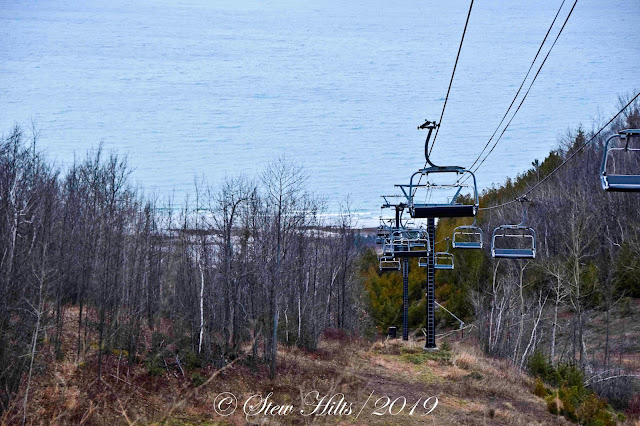 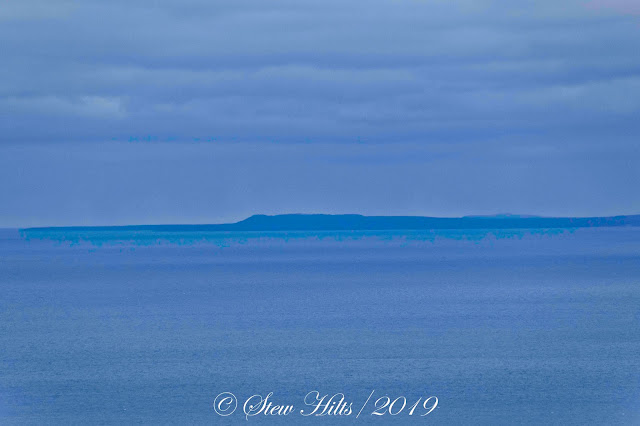 At the top of one of the steepest ski runs we got a great view of the bay, with the silhouette of Christian Island in the distance.  Christian Island was the temporary retreat of the Hurons after they were attacked by the Iroquois in 1649, but that's another story! 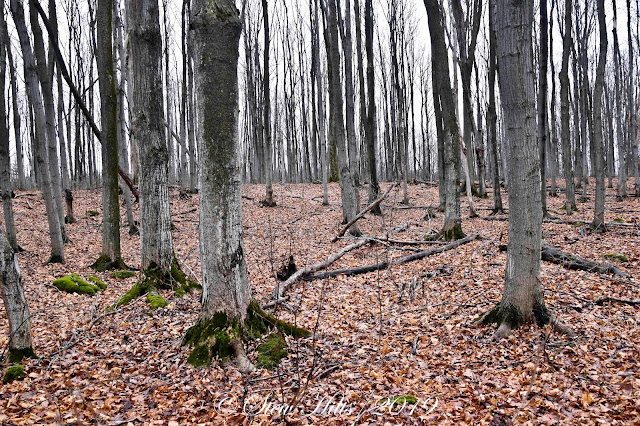 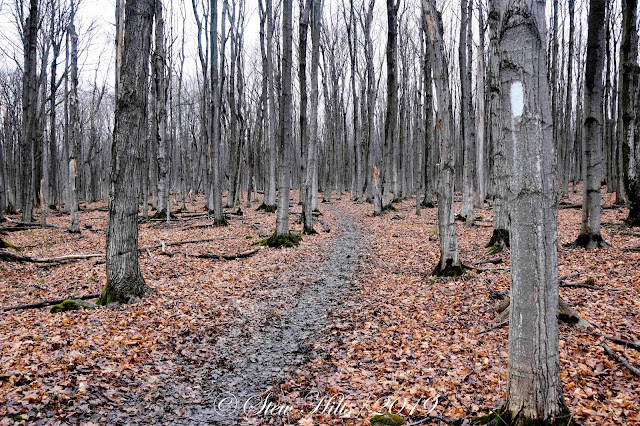 Thereafter the forest changed quite dramatically into an almost pure Sugar Maple stand, a lot more mature than we had seen so far.  I was getting pretty tired at this point, but kept putting one foot in front of the other and before I knew it we were out to the road, a good 5 km. walk.
Posted by The Furry Gnome at 12:31 PM