We had two more brilliant cold but sunny winter days, the kind of days that make winter worthwhile!  On Sunday I got out with a friend to tramp through his property just south of Kimberley.  It was more bushwhacking than following a trail, but it was a great outing.  I love exploring off the beaten track. 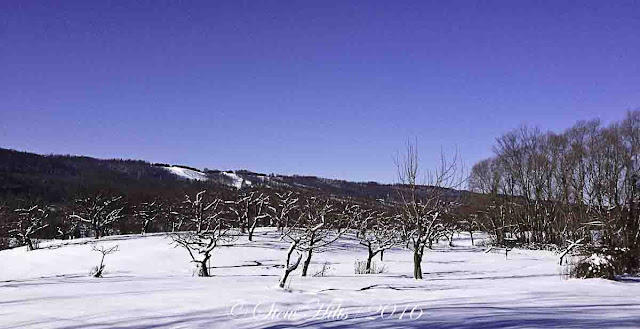 There's a small orchard in one corner of the property where I've often picked a few apples in the past.  Those are the old ski hills of Talisman in the distance. 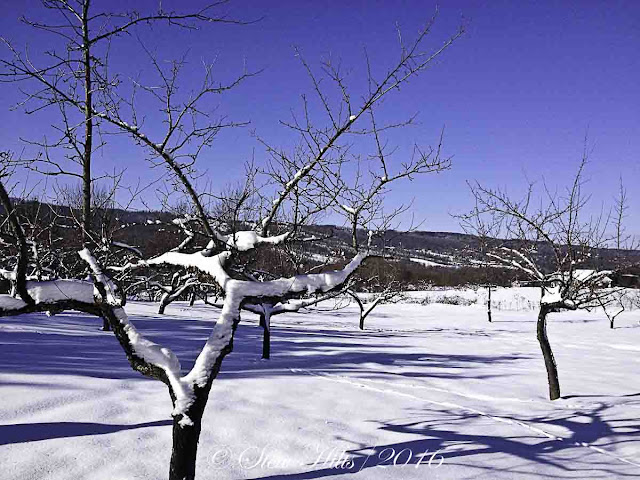 This is just a small hobby orchard, but he really enjoys it, and is planning on planting some more trees this year. 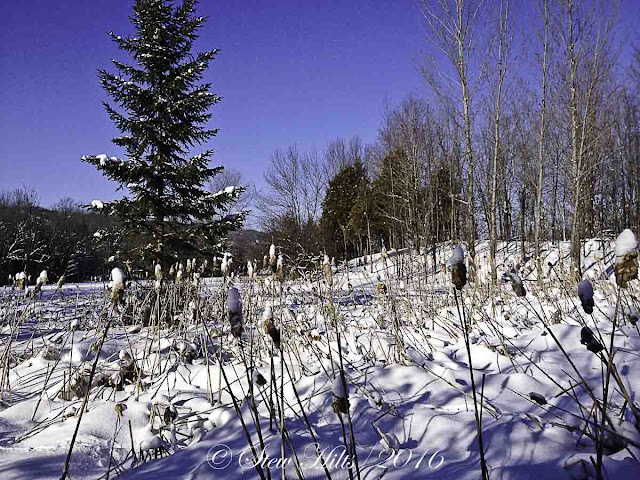 We headed down the hill and came to the wetland, with a tiny stream meandering through.  We stepped over it with our snowshoes, and headed into the woods. 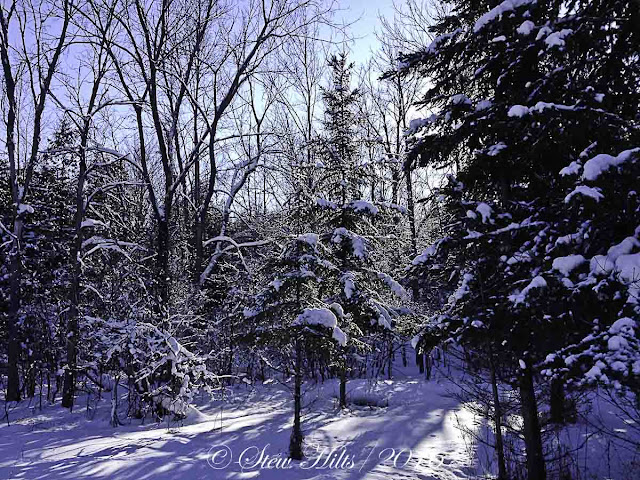 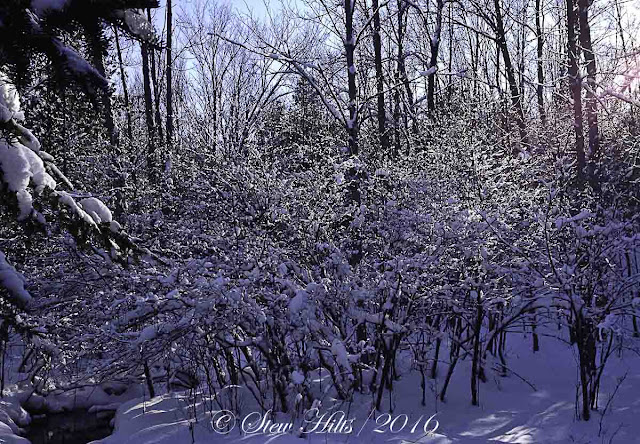 We were walking into the sun part of the time, and the fresh snow was sparkling on the trees and shrubs.  The stream shows up in the lower left corner. 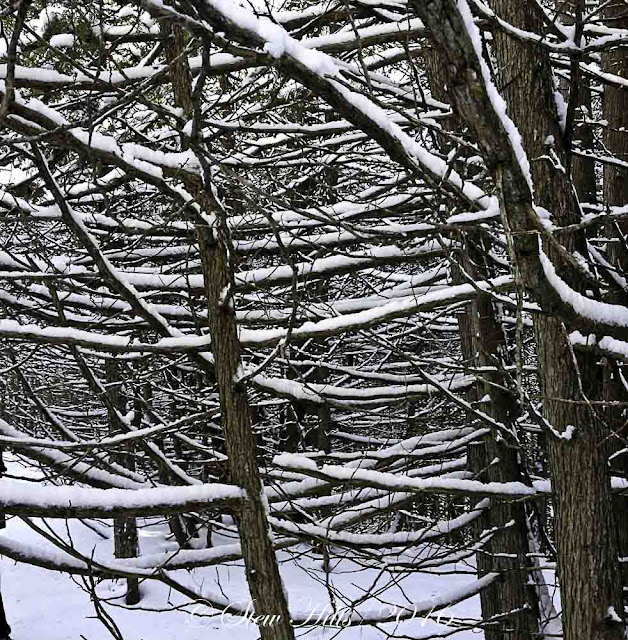 Then we got deeper into the cedars, where the deer yard up over the winter.  We saw lots of tracks and spots where a few deer had spent the night. 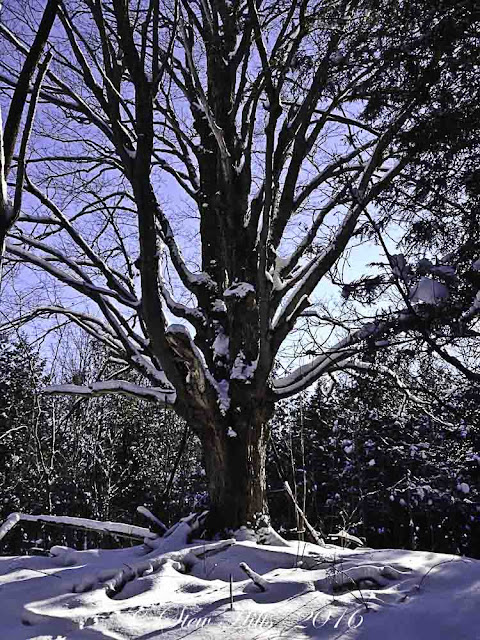 Along the south border there are a few big old Sugar Maples.

Other parts of the property are young hardwood forest, all young White Ash and Sugar Maple, growing fast.

Mysteriously, up on top of the hill, there are several very small woodland ponds.  There must be enough clay in the soil to hold the water in these small depressions. 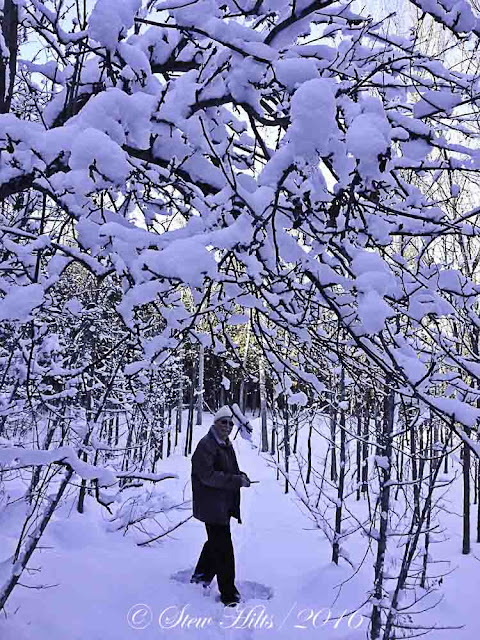 I've known Peter for nearly 30 years, and have walked this property often in the past, but not often in the winter on snowshoes.  He has planted hundreds of trees; I may someday write something about his love of this little parcel of land, why he bought it, and what he's done with it. 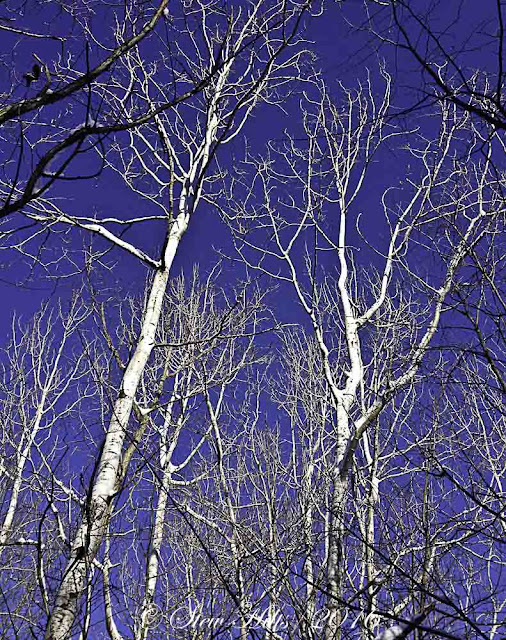 White bark in a grove of poplar trees. 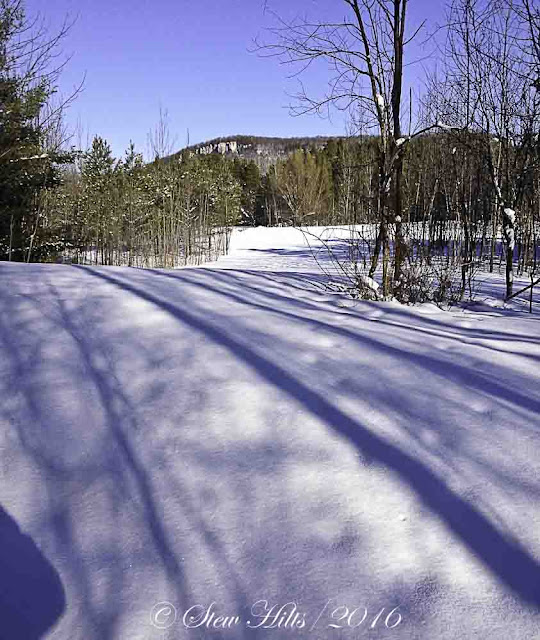 He keeps a small odd-shaped area mowed, and you get a nice view of the cliffs at Old Baldy.  He's hoping to build a barn up there in the open patch; maybe I'll have some comparison pictures in a year or two. 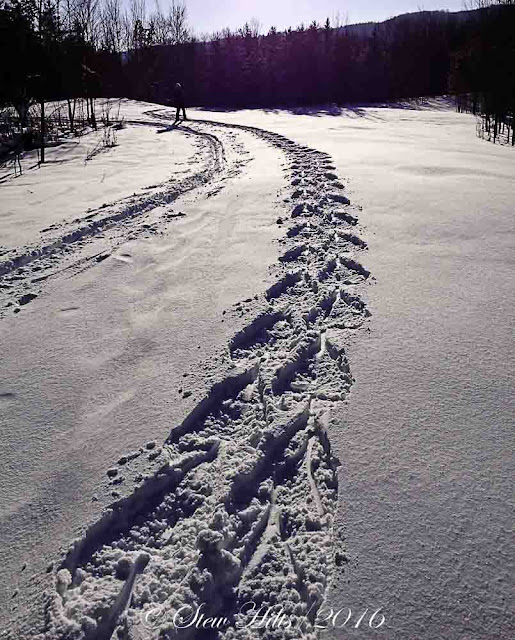 We walked on snowshoes in deep snow for about 2 hours; I was thoroughly worn out!  Some other neighbours had been in cross-country skiing.

A view over his neighbour's field, showing the long west slope of the valley heading north, the old Talisman Ski Resort in the centre.  Here today we've had a grey day above freezing, with thick fog as a result.  But some of that pile of snow on my back deck melted too, so I've spent about 4 hours today trying to get at least some of it removed.  I'll have a few sore muscles in the morning, but I'm very glad to get some of that done.

The three narrow horizontal photos, 8, 9 and 14, are not cropped, but are iphone panorama shots.