The 'Streets' of Venice

Donna's Photo Challenge this month is 'street views'.  Like many other participants, I never take street shots, even many people shots, but as soon as she posted this challenge I thought of these views of Venice.  And it's about time to leave the deep cold and snow of the Beaver Valley behind for awhile and explore elsewhere, so here they are, the start of a few posts on our holidays last year. 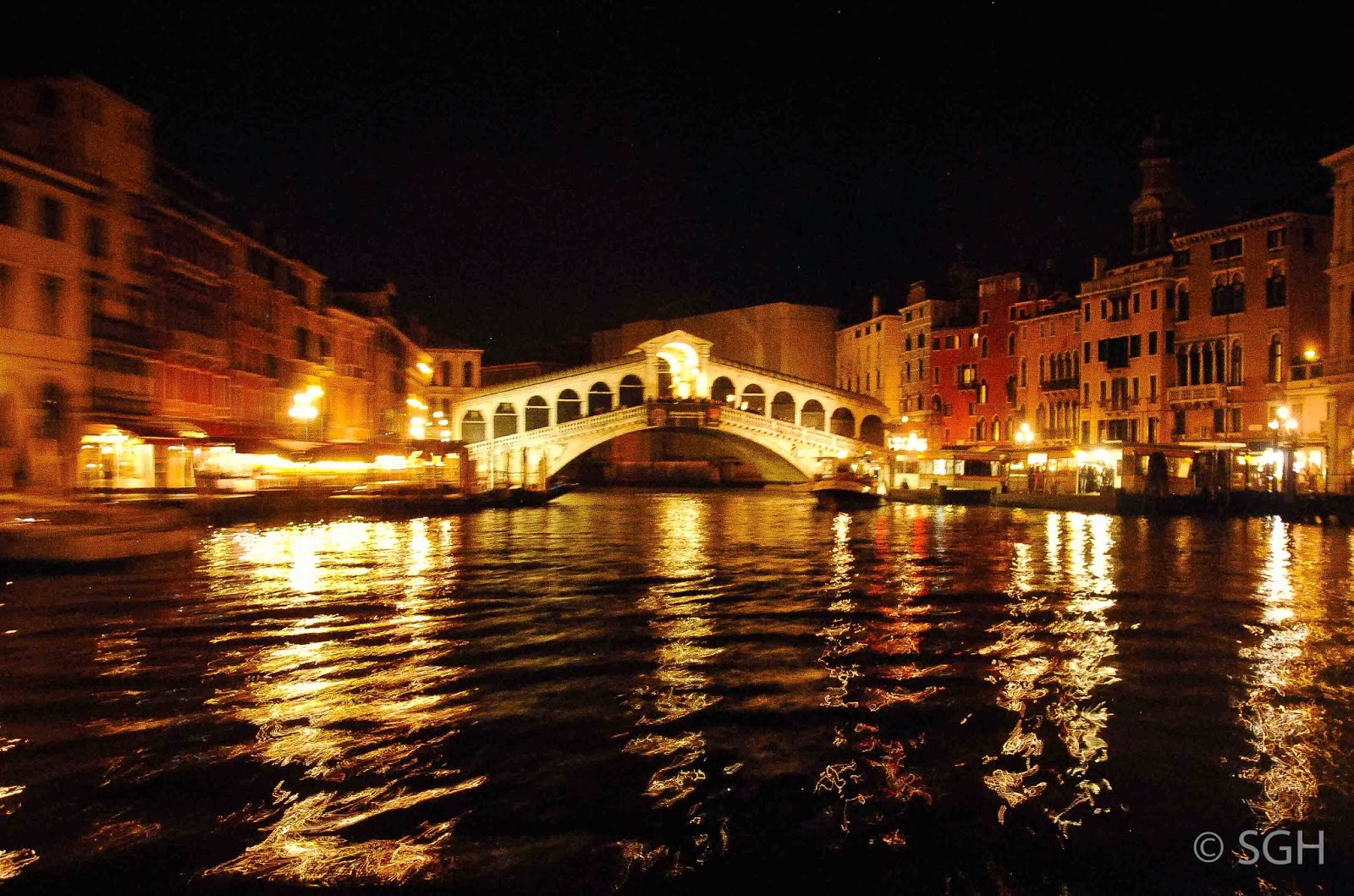 The main street of Venice is of course the Grand Canal.  The best thing we did was buy a vaporetto (water bus) ticket, and ride the canals.  This is heading north toward the beautiful Rialto Bridge, probably the most famous bridge in Venice. 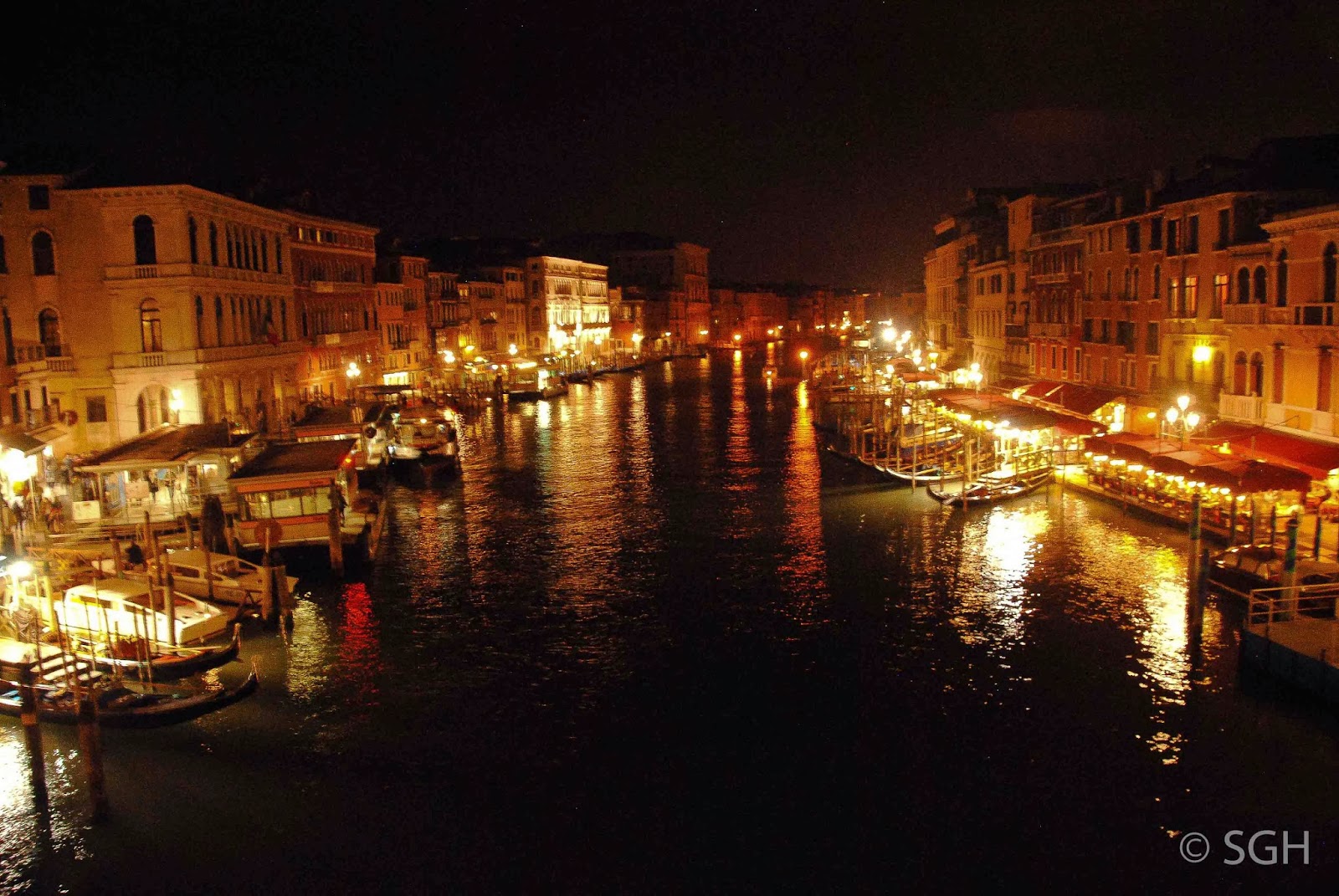 The canals are the 'streets' of Venice, and everything is delivered (or removed) by boat.  There are hundreds of water taxis, and we saw garbage boats, delivery boats, and ambulance boats (as well as the dozens of gondolas) - sometimes looking like a crash was inevitable!  This is the view back down the canal from the bridge. 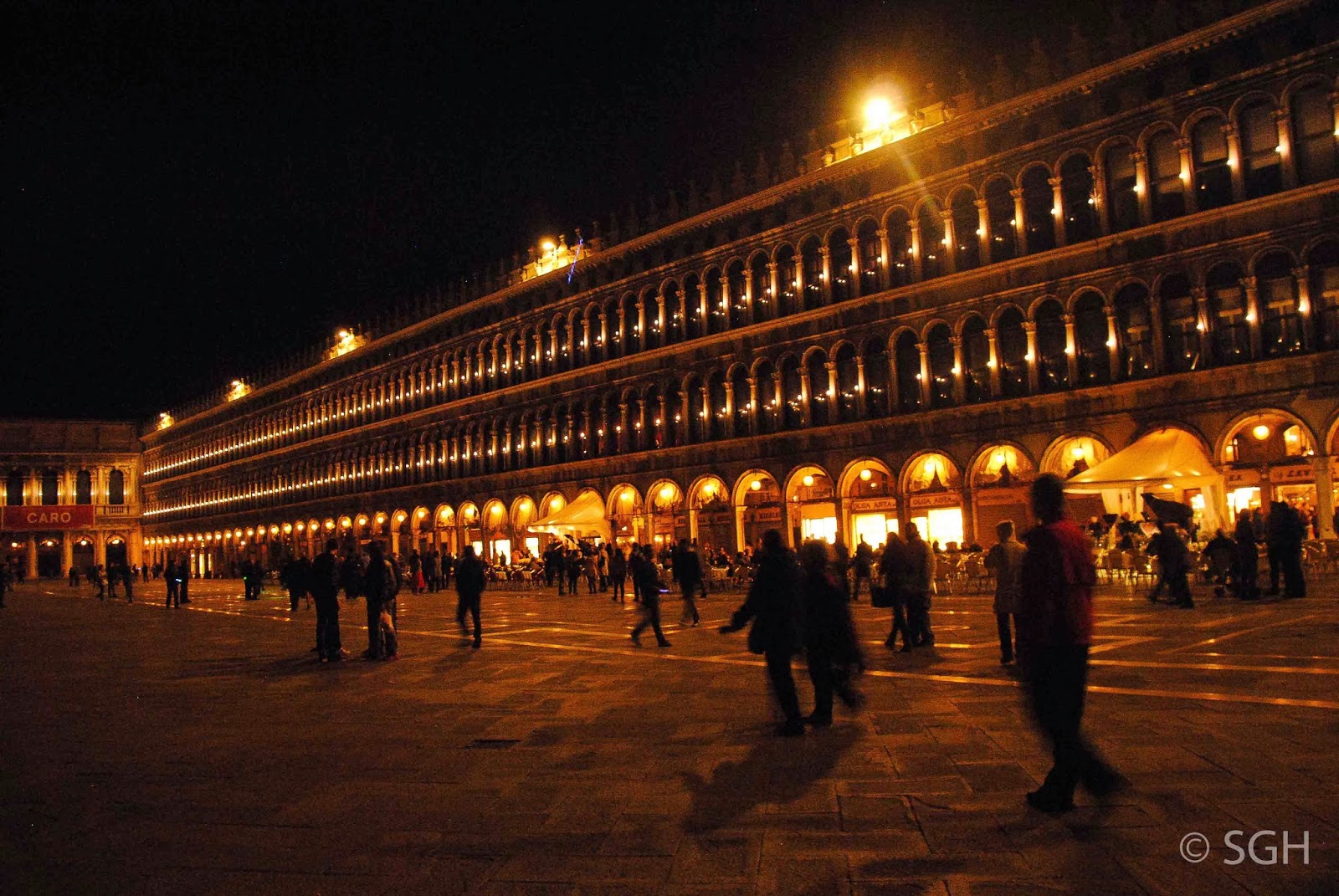 There are many pedestrian streets (but no cars), mostly narrow allies between buildings, but the big pedestrian 'street' is Piazza San Marco (St. Mark's Square) - and it's best visited at night.  By then all the cruise boat passengers have headed back to their ships for dinner, and walking is a lot more comfortable - there can easily be 6 cruise ships disgorging passengers in town for the day, even in the off season, and sometimes several more! 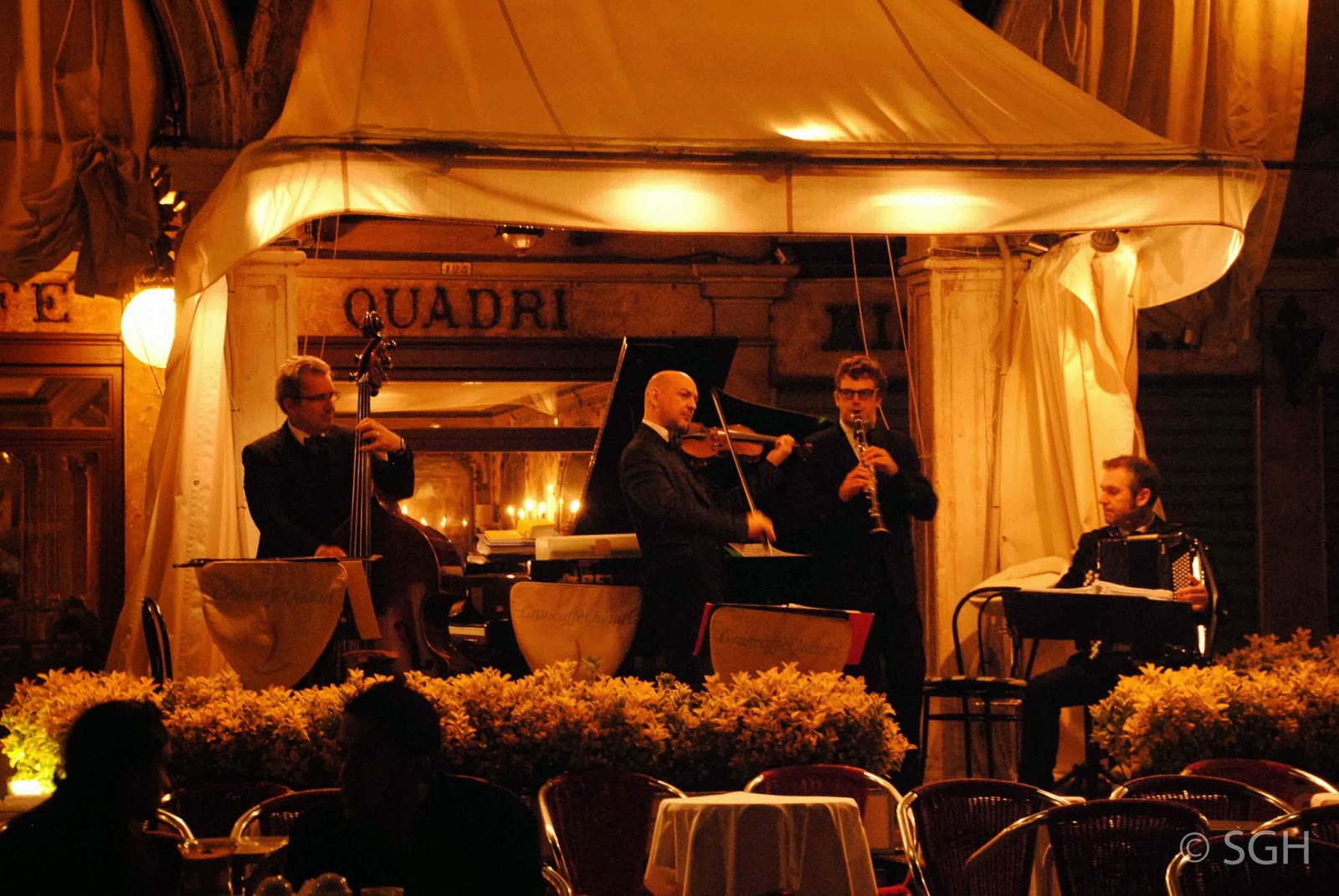 Some of the hotels on the square keep a band playing in the evening, hoping to entice you in for a very expensive meal.   We were there in early October so crowds weren't unreasonable, but this place gets 24 million tourists a year, that's 65,000 a day, mostly concentrated in one square mile between St. Mark's and the Rialto Bridge, and mostly in the summer months. 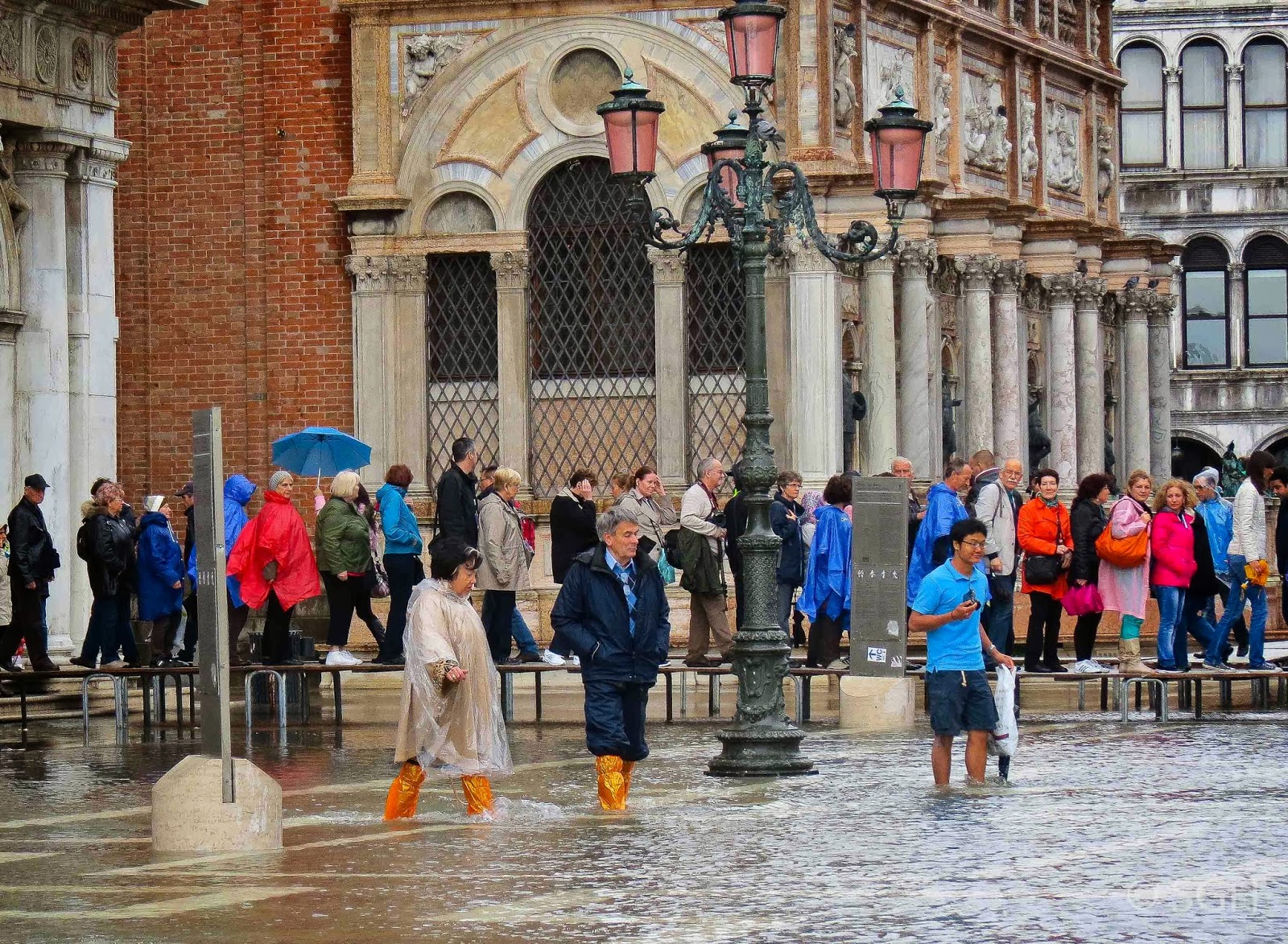 And I'll slip in one daytime picture near St. Mark's, showing the 'acqu alta', the high water which floods the square and some other parts of town during high tide.  Venice has a huge and difficult challenge from this if it is going to survive as we currently know it.  The mosaics on the floor of the old church were under a foot of water.

All of the night shots above were just hand held, bracing myself as best I could to keep vibration to a minimum.  Exposures range from a tenth of a second to nearly a full second, so there's a bit of blur if you look closely.  I just used trial and error in aperture setting on the camera to get the exposure I wanted.  Check out the other street views on: