After Shenandoah, we headed southwest, aiming eventually for the Great Smoky Mountains National Park, following the winding curves of the Blue Ridge Parkway.  I got a handful of great pictures, especially of the Redbud, with it's beautiful pink flowers in very early spring - this was late April. 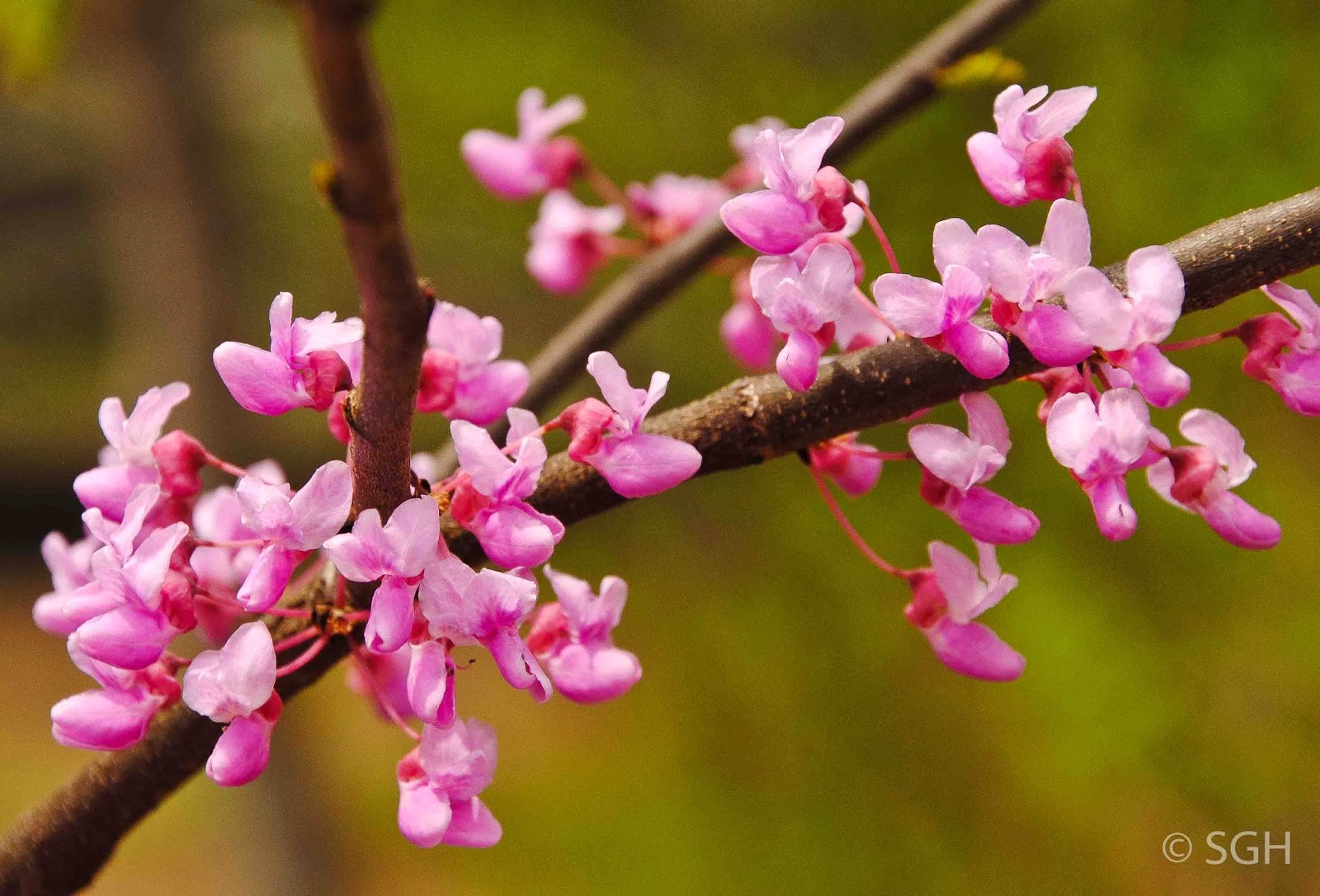 Redbud shrubs barely make it into southern Ontario, but my mother had one in our yard that was one of her favourite which I remember well.  We have 3 or 4 but they just remain small shrubs and never bloom - we're too far north.  It was wonderful to see them growing wild and in bloom all along the roads. 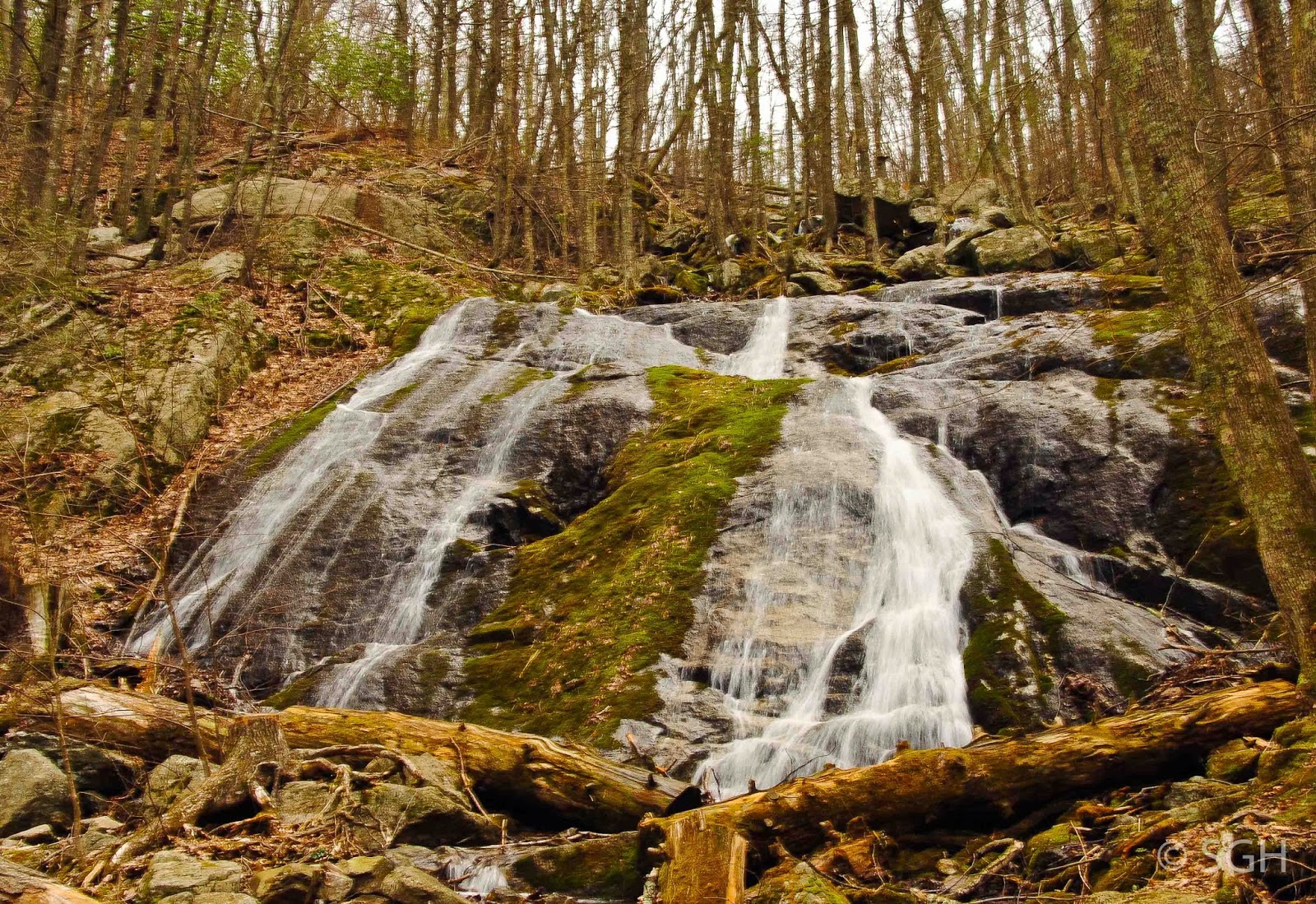 One of our first stops was an interesting waterfall, tumbling down in a sheet across some large mossy boulders.  I was very interested to find right beside it a small piece of narrow-gauge railway track that has been restored to illustrate the early days of lumbering in the area.  And yes, that's our camper we're towing on this trip, it's inaugural voyage! 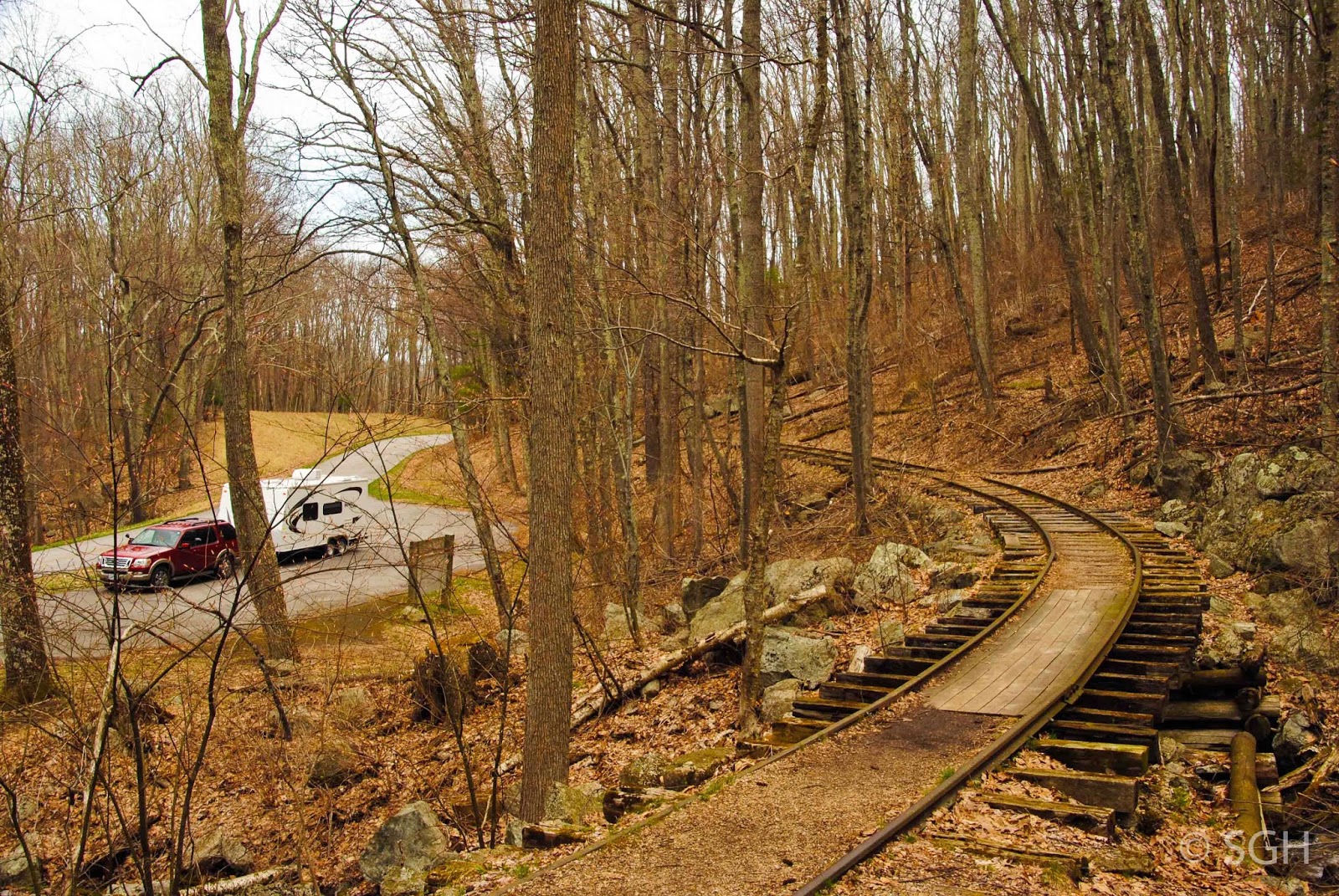 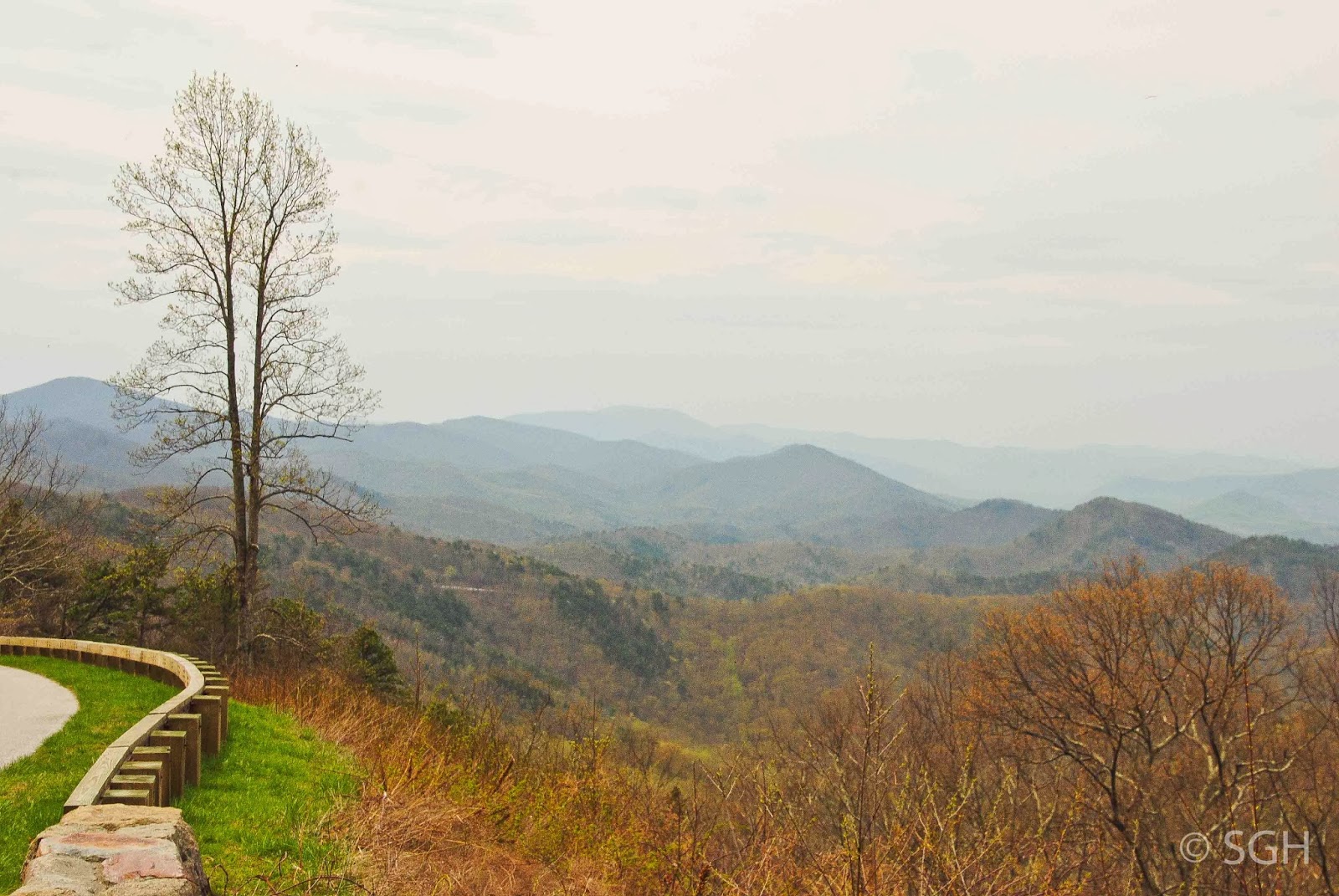 There were numerous beautiful views, if a little hazy.  But I have to be honest and admit that our memories of the Blue Ridge Parkway are not entirely positive - with apologies to those of you who live nearby and know it well.  The first challenge was getting there.  I took what I thought was a main road (a 'highway'), but it got steeper and steeper and the dog's legs got tighter and tighter until we just crept up to the top in low gear at 15mph.  I honestly feared we wouldn't make it! 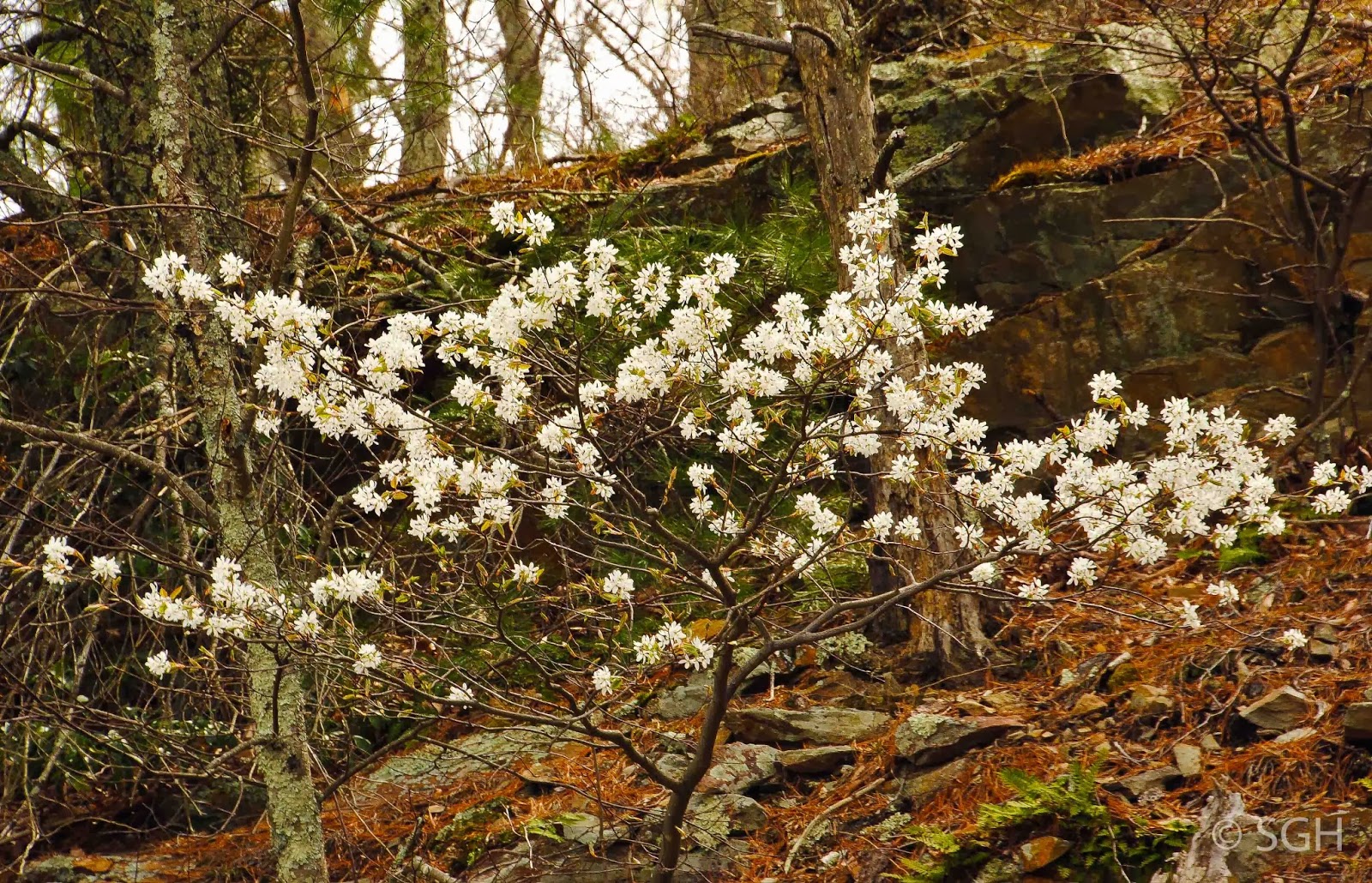 The serviceberries were in bloom as well as the Redbud, so it was truly a beautiful drive, but when we tried to stop along the way we discovered the U.S. government budget shutdown.  All the picnic spots, washrooms and other facilities were shut tight.  I turned off the road several times to discover a locked gate 100 feet in front of me, forcing me to back out onto the road again with the trailer.  I quickly stopped trying. 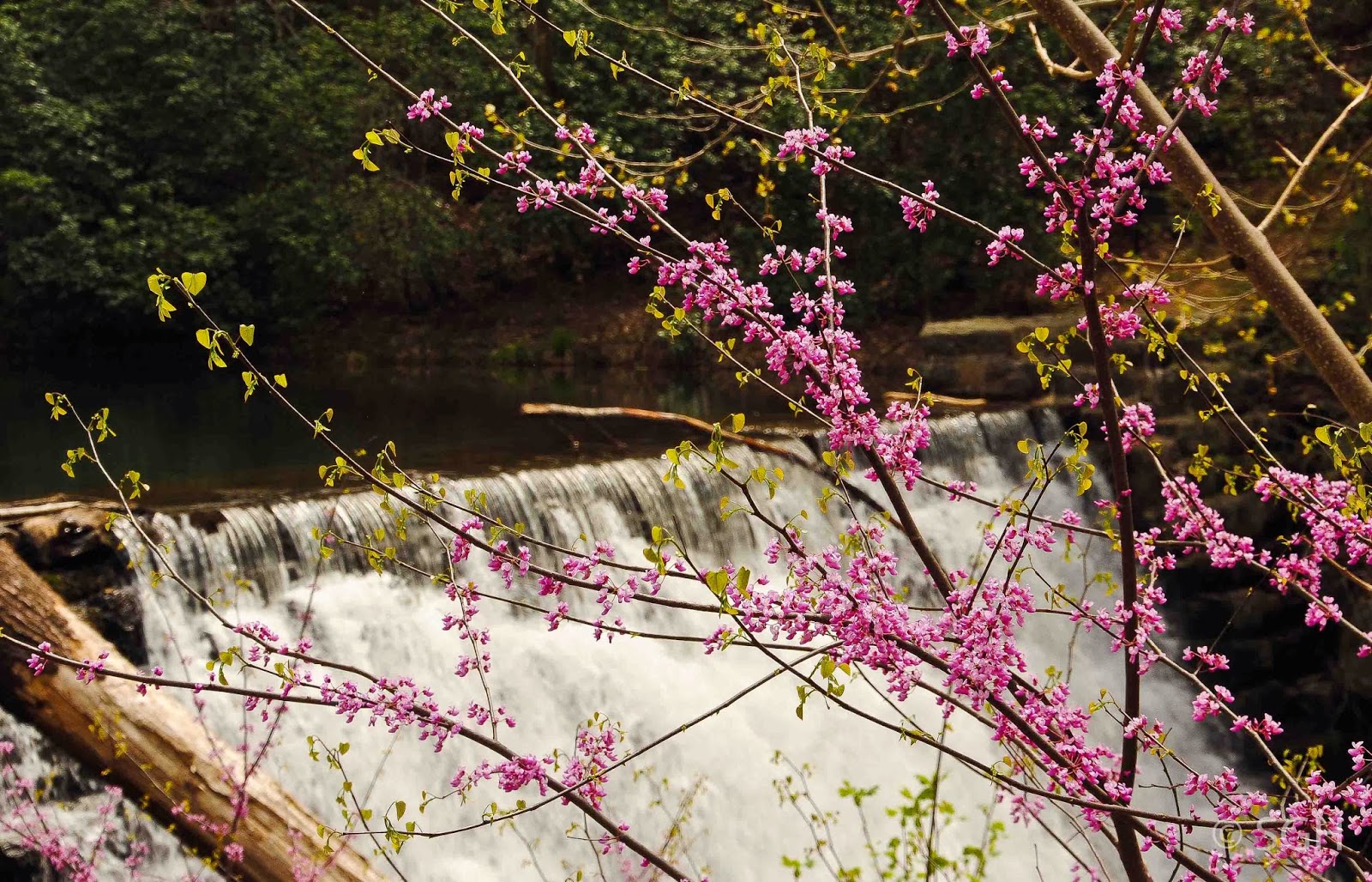 We did get pulled off at a roadside stop to see a beautiful waterfall over a small dam, with that Redbud blooming.  And my wife discovered something we've never seen before, a small flock of swallowtail butterflies apparently drinking sap off a tiny beach.  It appeared to be dripping onto the sand from a tree above.  I've never seen this many swallowtails, let alone in a single cluster. 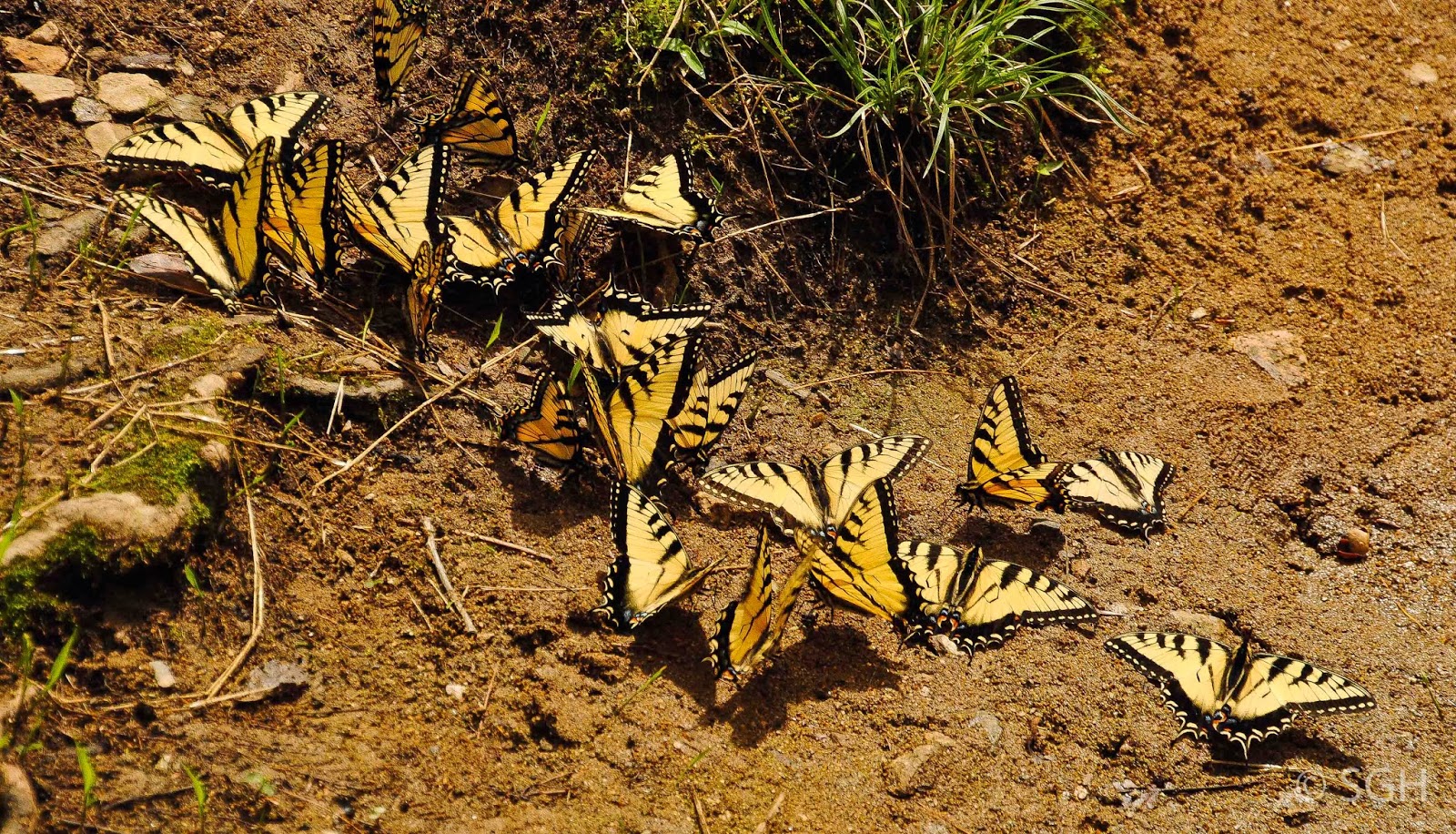 On the next day we hadn't gone far when we encountered a detour - all the way down the mountainside to a main highway in the valley.  It turned out a landslide had closed the parkway, but too our frustration the detour went on for 100 miles.  We finally gave up and just drove on to Ashville. On the other hand, the Smokies, which we eventually arrived at, were spectacular, so we put our Blue Ridge experience down to an unfortunate set of circumstances and moved on.