On our last evening in the Great Smokies, my wife suggested that we drive back up to a lookout which had been described as good for sunset pictures.  We headed back up the road over the mountains, and near the top found the lookout. 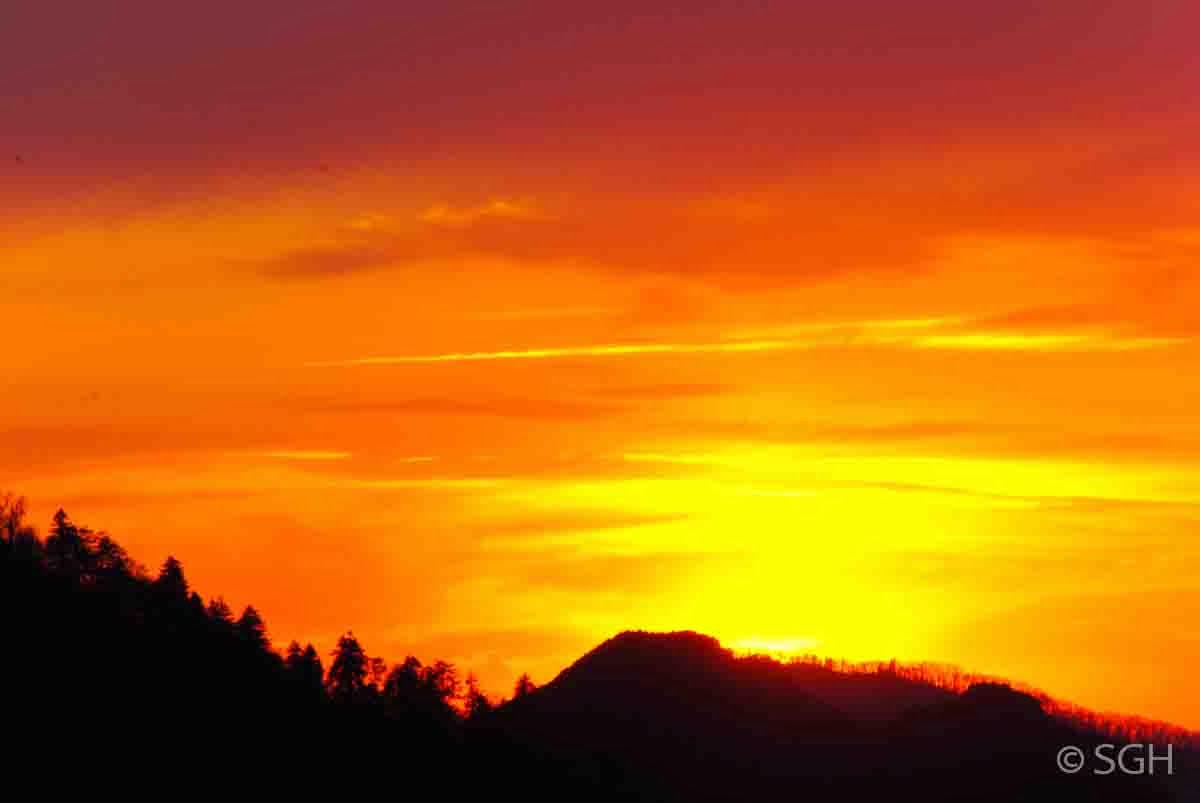 We were lucky.  The sun was shining, but there were also clouds, so as the evening wore on we did get a spectacular sunset.  I was using my zoom lens, so some pictures were telephoto while others showed the whole valley.  This one was a closer look at the peak of the colour. 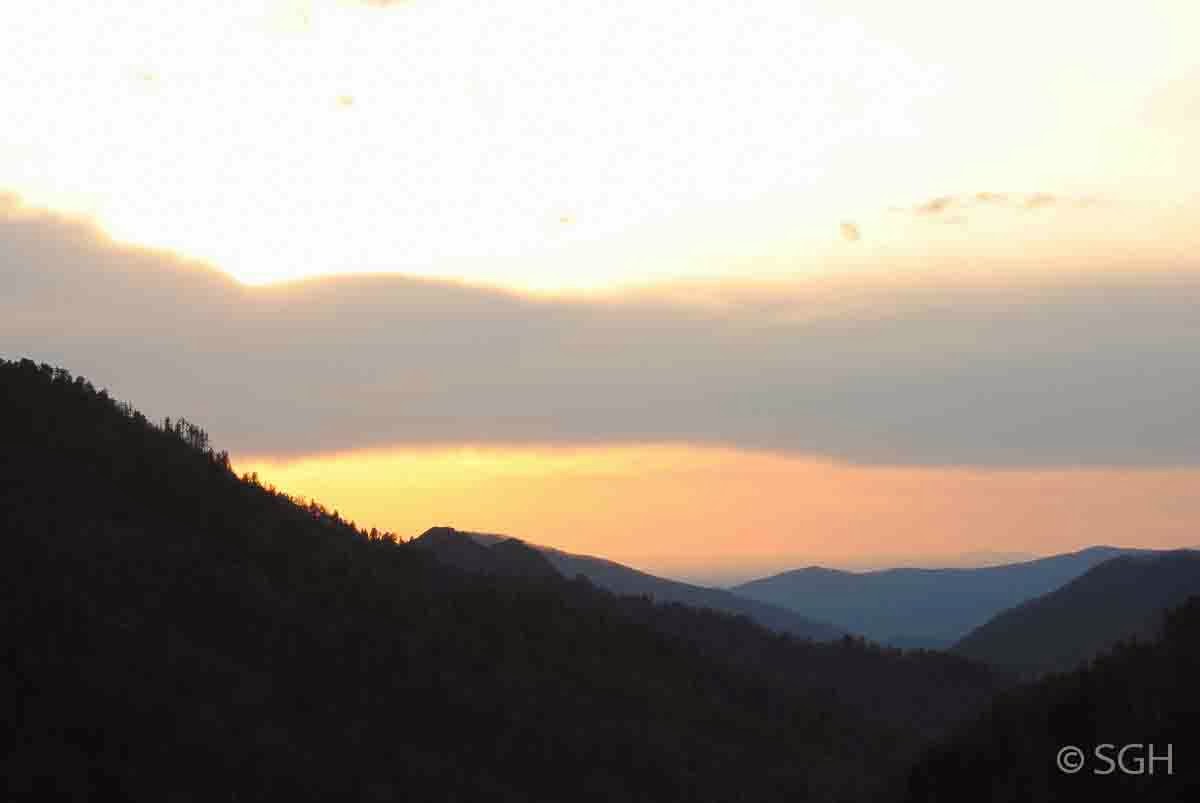 The colour in the sky hadn't even begun when we got there, and already five other photographers were lined up with their tripods and cameras, some with suitcases of lenses in their car!  This shot shows the whole valley, with the overlapping ridges down the valley that give that characteristic distant look to the mountains. 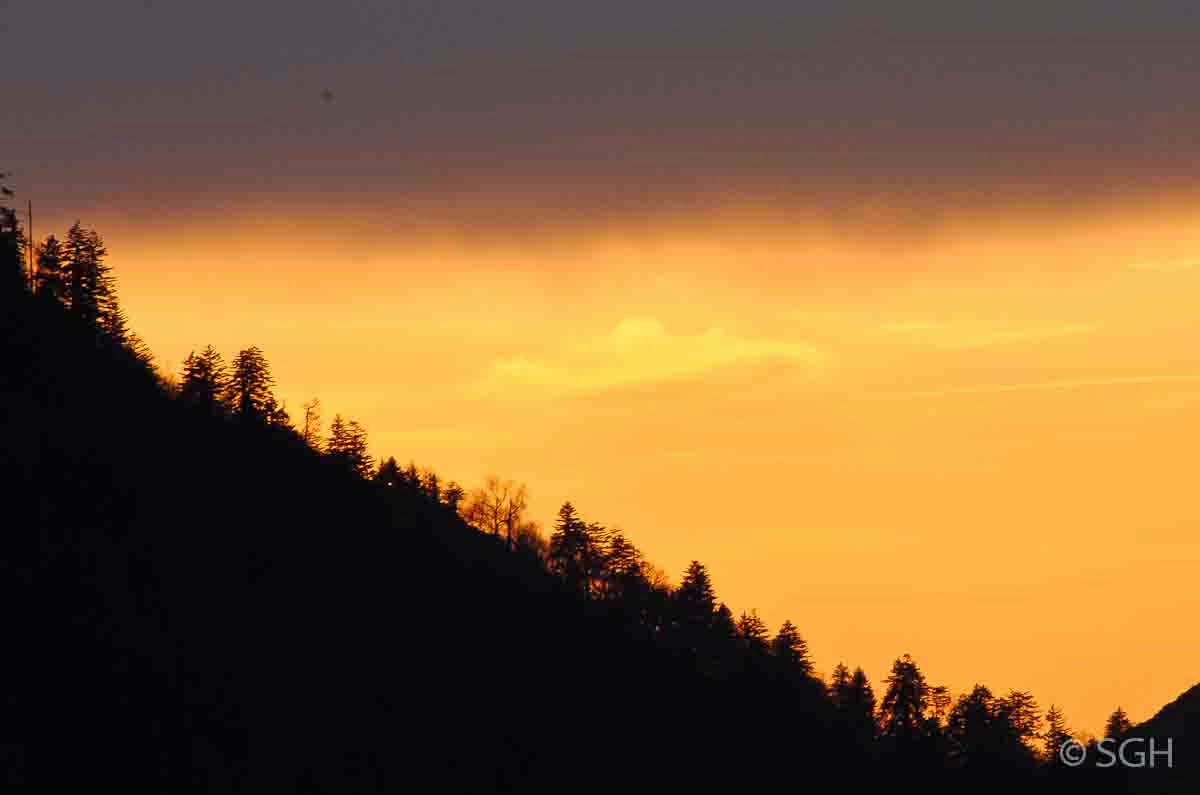 On the other hand, this photo is zooming in on the trees silhouetted on a mountain slope in the foreground. 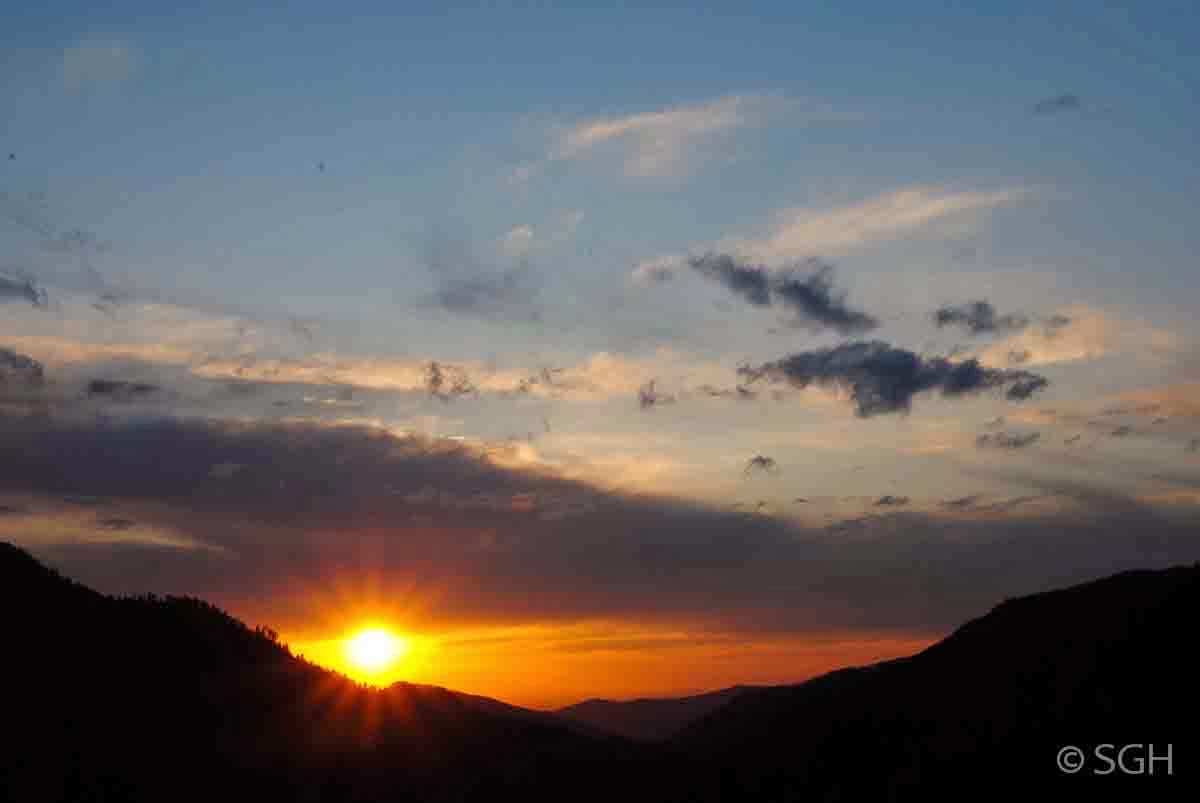 As time passed, some other little wispy clouds drifted in, making the scene a little more varied, and as the sun headed down behind that mountain slope, the smaller clouds showed up in pink.  Over the evening, the colours changed from a light orangey-pink to a deep orange-red. 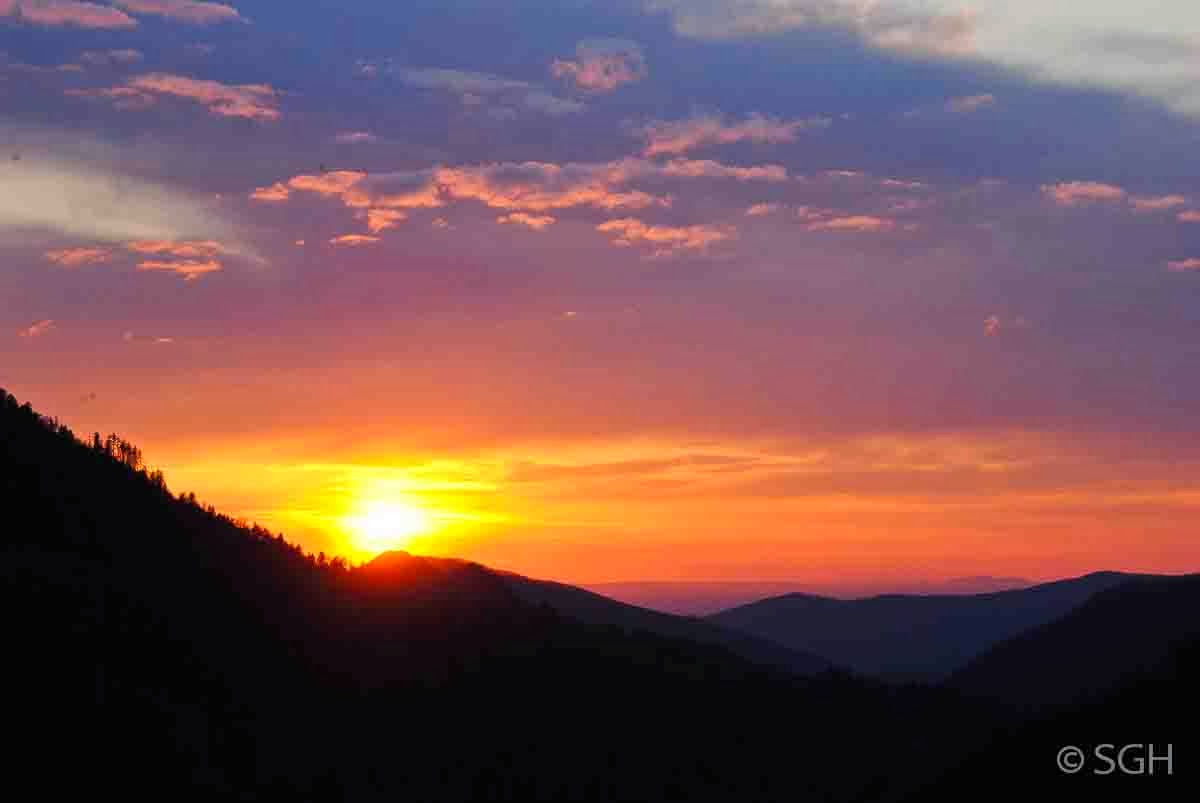 I shot the first half of these in aperture mode, just watching what the camera was telling me, and allowing for longer and longer shots, with the camera on my simple little tripod.  But at some point as the aperture setting reached its maximum, the pictures became too dark.  I just naively turned the camera to manual mode and kept on shooting, judging the exposure by trial and error - something easy to do with digital cameras! My first use of manual setting with a digital camera, and quite successful; it's not as hard as I thought. 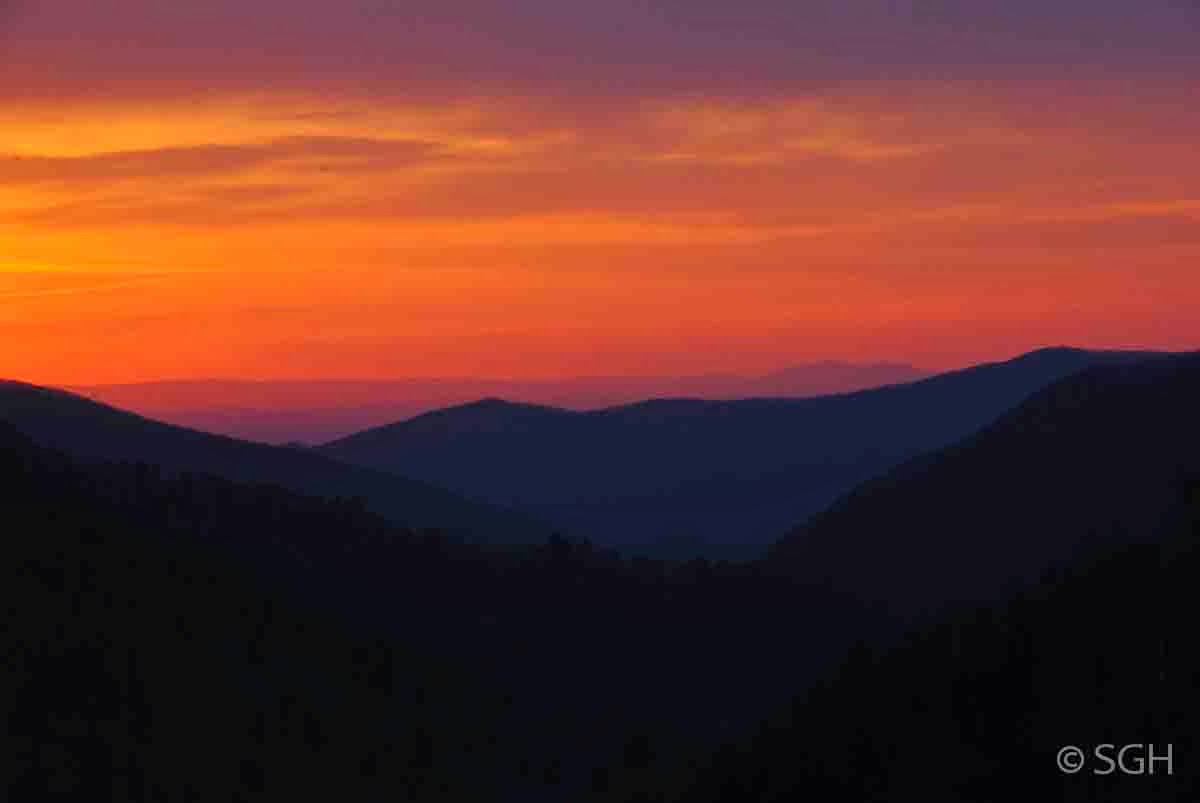 I really like this shot, a sunset with no sun in the picture, shot fairly late in the hour and a half we were there.  I was exposing these for 2-3 seconds by this time. 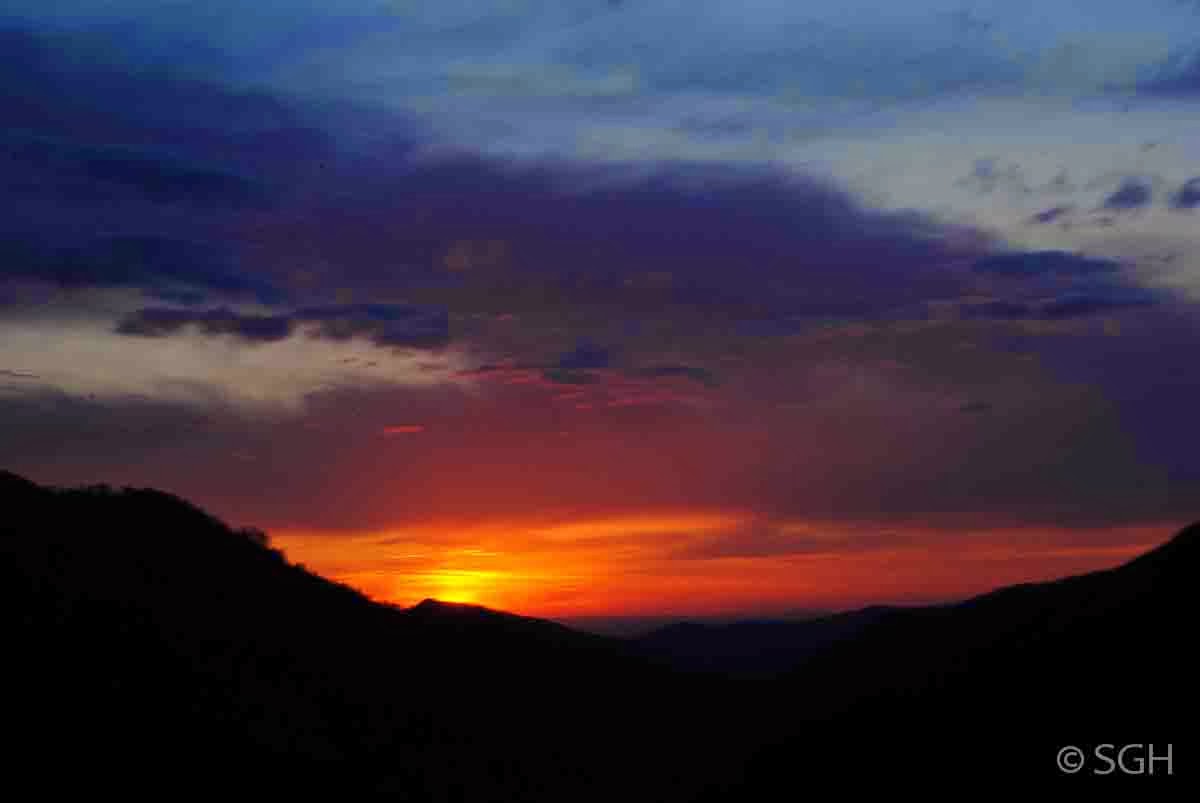 Eventually the sun set and the sky started to darken.  Twenty-five photographers started packing up their cameras and heading home.  It had been a totally unexpected but fun evening for us, my wife waiting patiently while I took 100+ sunset pictures. 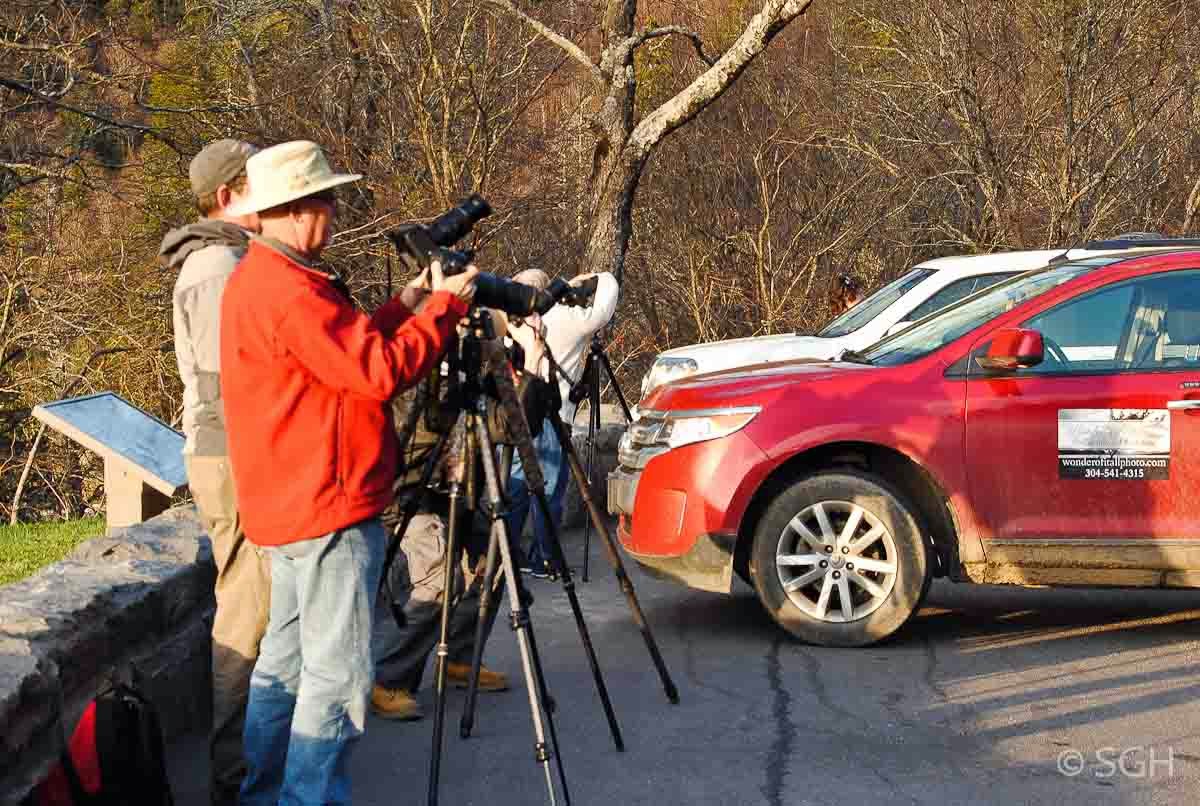 These are some of the photographers who were there when we arrived, getting set up.  By the time the real sunset arrived we were lined up shoulder to shoulder, and had to move aside to let passing tourists who just stopped for a quick picture get their turn!  My first experience of combat photography, but I survived.


A little late, but still linking to: