So why did we end up with thousands of homes being built across southern Ontario in the 'gothic revival' style that my post yesterday illustrated?  Well, in a Canada Farmer issue of November 1865, an illustration as well as building plans were provided!  Along with directions to follow as you started building!  Pretty useful for the do-it-yourselfer.

Here's one of the illustrations of the 'gothic revival' farm cottage from 1865, copied over and over, but you can still make out the style.  This one was of board and batten.

A second illustration shows a stone house in a similar style and size, including the side elevation showing the one-floor extension out back.  It's not surprising that thousands of these homes were built when illustrations and building plans were provided!

And what does 'gothic revival' mean?

Gothic revival refers to a renewed interest in medieval architecture, as perhaps expressed best originally in the great European cathedrals with their statues, gargoyles and spires.  In the 19th century many early great churches, some schools, and university buildings were built in this style.  Perhaps the best widely known gothic revival buildings in Canada are the Canadian Parliament buildings in Ottawa.

This decorative style of architecture was dramatically simplified in the small gothic revival cottages.  This architecture is typified by steep rooflines, gingerboard trim and other decorations such as finials, sidelights and a transom around the front door.  And don't forget the tax incentive that made this one-and-a-half story home so popular. 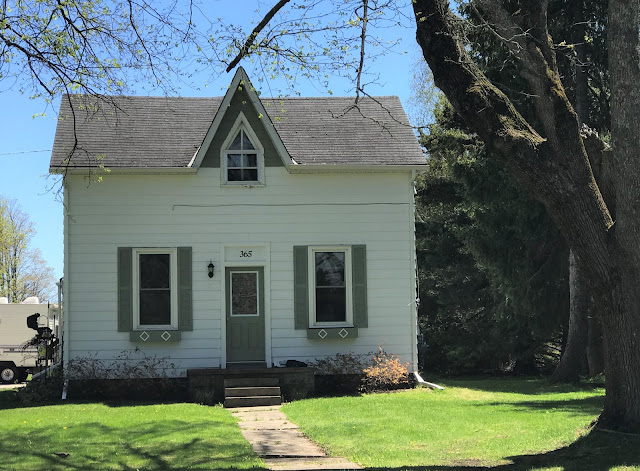 After photographing the five brick homes in yesterday's post, I finally noticed a similar frame house across the road.  Again it's that same architectural style, though it's not built in brick.  Note the little triangular window under the dormer.

I learned quite a bit the past couple of weeks looking up this building style and trying to understand it.  Hope I haven't just confused you!
Posted by The Furry Gnome at 2:23 PM