Saying Good-bye to the Trail

Intro - I recently wrote this article which appeared in the local Beaver Valley Bruce Trail Club newsletter.  It will give you some idea of the background to yesterday's ceremony.  I've been involved with the Bruce trail for a long time!

As many of you know, in Feb, 2017 I had one of those operations where everything that could go wrong did, and I ended up paralyzed from the chest down.  In the months since I’ve had to come to grips with saying good-bye to my Bruce Trail hiking and land stewardship work among a lot of other future dreams.  It’s surprising how I’ve been able to do this without undue emotional angst, I think because I have lots of Joyful memories of the trail to carry me on. 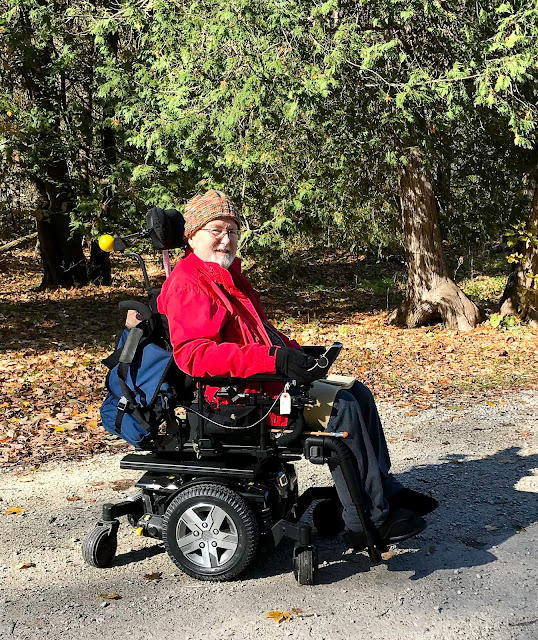 I think it was 1962 when I first hiked a stretch of the Bruce Trail.  It was during the first natural history weekend sponsored by Ontario Nature (then the Federation of Ontario Naturalists or FON), up the Bruce Peninsula. We hiked the first section coming south from Tobermory.  In those days that route just followed the actual rocky shoreline.  Only 14, I had accompanied my mother and aunt on the weekend, meeting such leaders as Mac Kirk, Phil Gosling, and Fred Bodsworth for the first time.  I later came to know these and other leaders quite well.  I also picked up my fascination with ferns that weekend, an interest I still have today.


Later that year I accompanied a high school teacher on another stretch of newly blazed trail east of Guelph.  This was the first year the trail existed, and there was a huge effort that summer to get as much of the trail laid out and blazed as possible, although it took 5 years until the trail was officially opened.  During these years our family hiked in several locations, particularly up the Bruce Peninsula.  We hiked the loop at Jones Bluff, climbed the cliff at Hope Bay to find the giant potholes and walked in at Dyers Bay to see the Devil’s Pulpit. 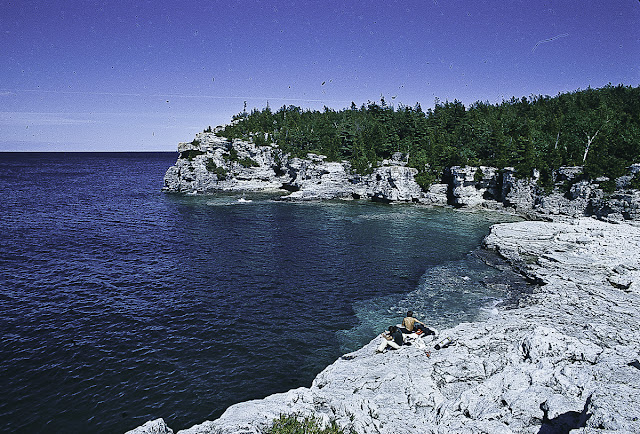 
We also hiked out to my favourite spot on the Bruce Trail, the Grotto and Indian Head Cove in what was then Cyprus Lake Provincial Park.  I still maintain that that short stretch of the Bruce Trail, hugging the shoreline of Georgian Bay, is among the most spectacular hikes in Canada.  On a sunny day in late June, with the brilliant blue water and the rocky cliffs it’s hard to beat in spite of the challenging footing, though now the crowds distract from the experience.


Getting a driver’s license opened the doors to more exploring.  Friends and I hiked the trail to see all the waterfalls in the Hamilton area.  Two of us camped in the Bruce Peninsula to celebrate the end of high school and revisited the Grotto and checked out several other stretches of trail along Georgian Bay.  By this time the cairn had been built to mark the northern terminus of the trail in Tobermory, and the trail was officially opened that summer.


It was during these years that I first hiked out to Old Baldy in the Beaver Valley, climbing over the rocks in a way I would never do today!  I also did my only overnight hike from Owen Sound to Blantyre. 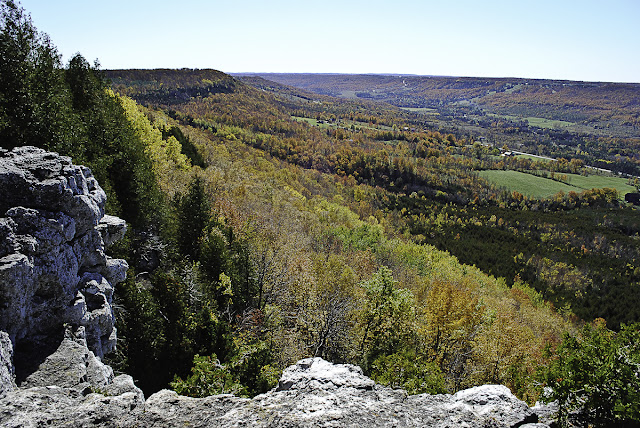 View South from Old Baldy
(The new side trail is just about centre, just below the horizon).

There followed a substantial gap during the years of grad school, young children and getting a career started at the University of Guelph.  But then, nearly 30 years ago I started bringing students up to the Beaver Valley for a week long field course.  For 20 years I introduced students to the beauty of the Bruce Trail in the valley.  I also invented a spring field course, and took students back up the Bruce Peninsula, a trip that always included a hike out to the Grotto.  One memorable year timing was such that we did the hike in late April – clambering over thick patches of ice along the shoreline trail. 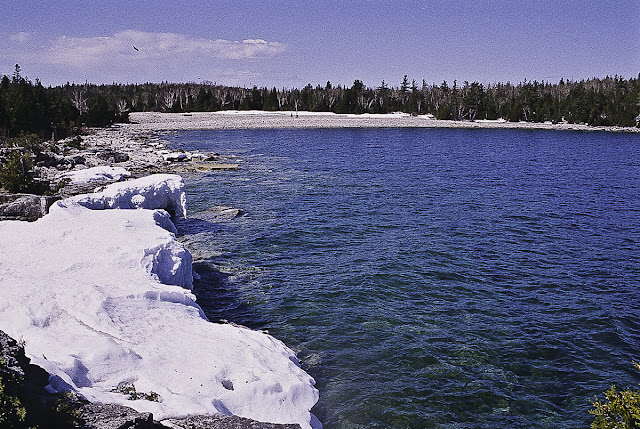 Ice on the Trail - April

There is something special about taking students to a wild scenic place like the Georgian Bay shoreline at the Grotto if they’ve spent much of their life in an urban environment.  The looks of astonishment and wonder more than pay back the effort.


On retiring I became Land Steward for the Harshman property.  The hike from Graham’s Hill Road down to Bowles Hill quickly became one of my favourite, and it still is.   Soon after I volunteered to become the Land Stewardship Director for the Beaver Valley Club, and in that capacity I’ve explored the trail through all 47 or so properties the BTC owns in the Beaver Valley.   Among those I have several stretches of trail that will always be favourite memories in my mind.


The south end of the Sly property is certainly one favourite.  It follows the rim of Indian Creek valley for a distance and then enters a mature forest which is carpeted with wildflowers in the spring – not to mention at least 4 small waterfall trickles along the top of the Manitoulin formation.   There are beautiful stretches of mature forest as you head south, but one of the gems of the valley has to be Metcalf Rock, where the trail drops down into a heavily shaded crevice carpeted with ferns, another place of wide-eyed wonder. 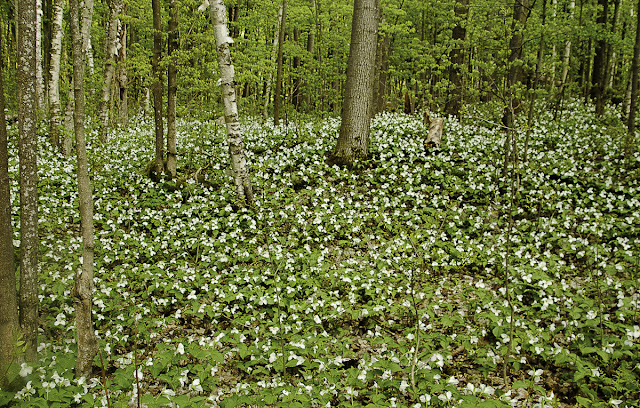 The walk out to Old Baldy, especially along the Mac Kirk side trail with its carpet of spring wildflowers must be the favourite hike for many of us.  On the west side of the valley, the hike downhill through the Harshman property to Bowles Hill is magnificent – sinkholes, huge old growth trees, and two waterfalls make it very memorable.  Finally, among my own personal favourites is the Clarke property, west of the 7th Line and east of Blantyre.  I’ve never seen more Walking Fern than here, where it carpets the wall of a small crevice. 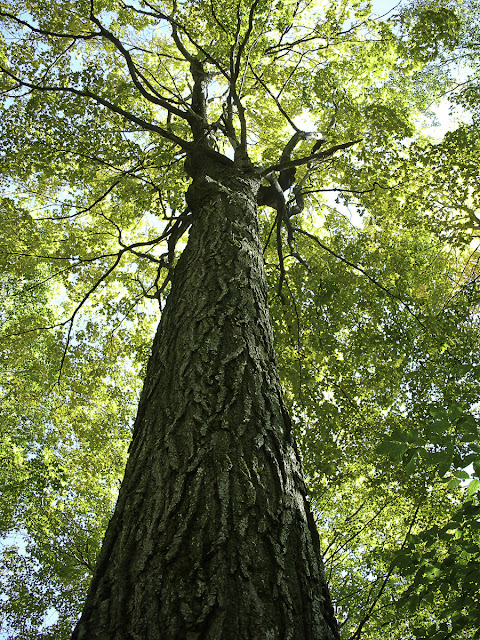 
My hiking future has changed abruptly, so you may not see me out on the trail, but rest assured that I have more than enough memories to carry me through.  And don’t take for granted your own hikes on the trail; store away those memories so you’ll always have them.