There are two plants that are widely in bloom here now, often seen along the roadside, in ditches, or along fencerows.  Dame's Rocket is commonly mis-identified as Phlox, while Wild Chervil, Anthriscus sylvestris, is a spreading invasive plant here in Grey County, with some similar but poisonous plants to watch out for.  In fact we seem to be the heart of its population in Ontario. 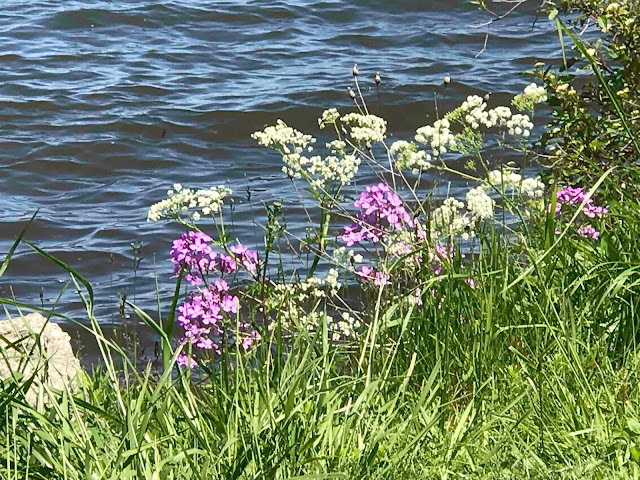 Here they are together, on the shore of the bay, just a short distance from the Garden-by-the-Bay. 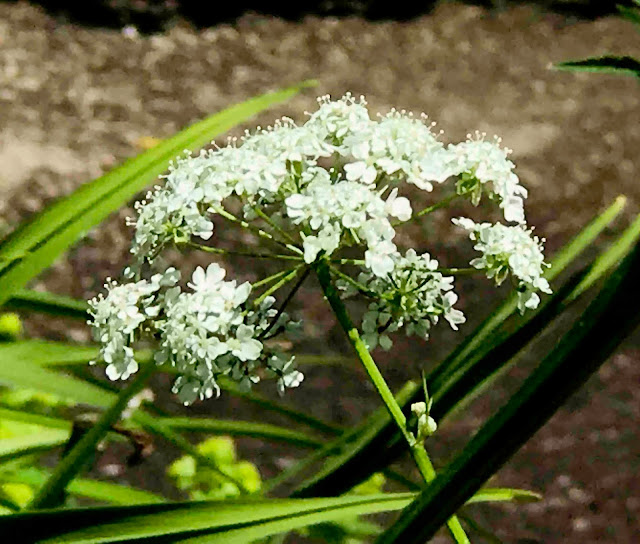 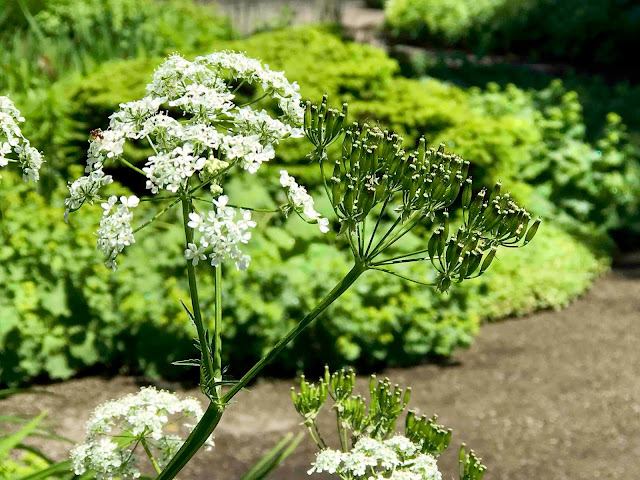 These photos provide a close look at a Wild Chervil flowerhead, with a flowerhead that has gone to seed.  They generate thousands of seeds, which is how they spread.  The 'flowers' are the tiny white blossoms or florets that have five almost microscopic petals.  Dozens of these tiny flowers are held in an umbrella-shaped cluster. 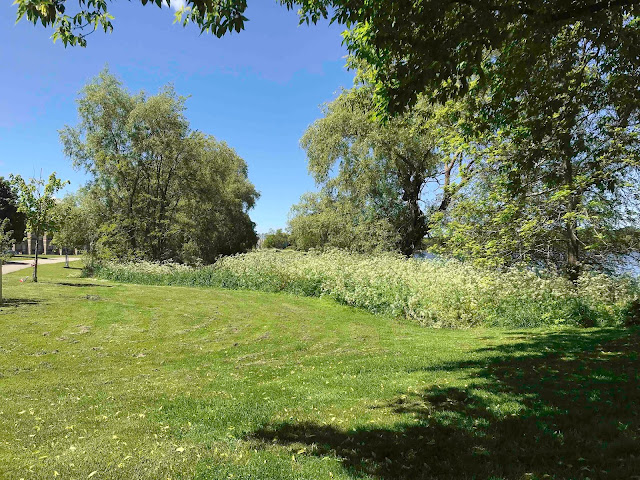 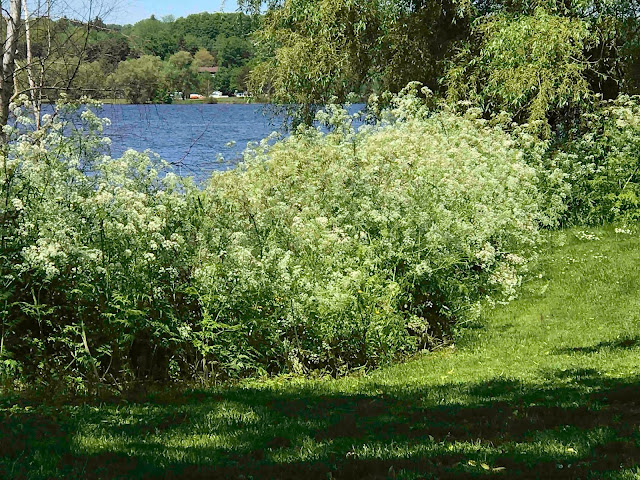 The problem with Wild Chervil is that it spreads so readily, as it has all along the shoreline trail where we walked a few days ago.  We see patches of it all over the place.

Another reason for writing this post is that there are some very similar plants, also in bloom at this time of year, that are poisonous - in the case of Water Hemlock, deadly poisonous.  Casually picking a plant like this might easily lead to skin burns or worse if you are not sure of the species.  Here's a list to watch out for:

Giant Hogweed, Heraculem mantegazzium - similar, but huge, up to 5 metres tall and flowers the size of dinner plates.
Wild Parsnip, Pastinaca sativa - also similar, but yellowy flowerheads.
Both of these species are poisonous to the touch.  If your skin is later exposed to sunlight, you will get a nasty burn.  Touching your eyes in this circumstances has been known to cause blindness.
Water Hemlock, Cicuta maculata - loosely similar, known as the most toxic plant in North America.
This plant, if eaten (by cows or humans), is almost always fatal, and the poison acts very quickly.

Sorry I don't have pictures, but my message is, don't touch a plant like this unless you can positively identify it, and don't in any circumstances eat either the roots or leaves. 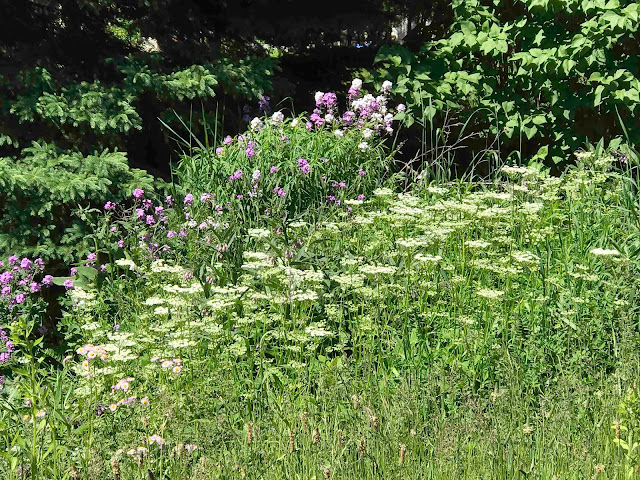 Here is more Wild Chervil, with Dame's Rocket in the background, both growing just down at the end of the street. 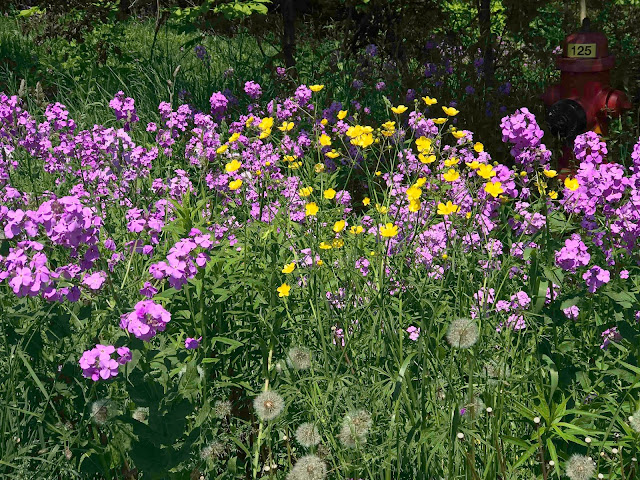 There's no poison associated with Dame's rocket, and it really looks rather pretty, especially when mixed in with Buttercups.  But it does get confused with your garden variety Phlox. 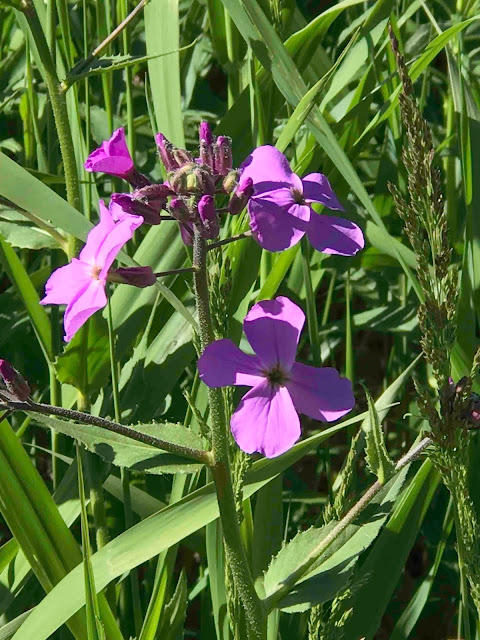 Here's a close look that easily shows the four petals of Dam's rocket, so if you're confused, just take a close look. 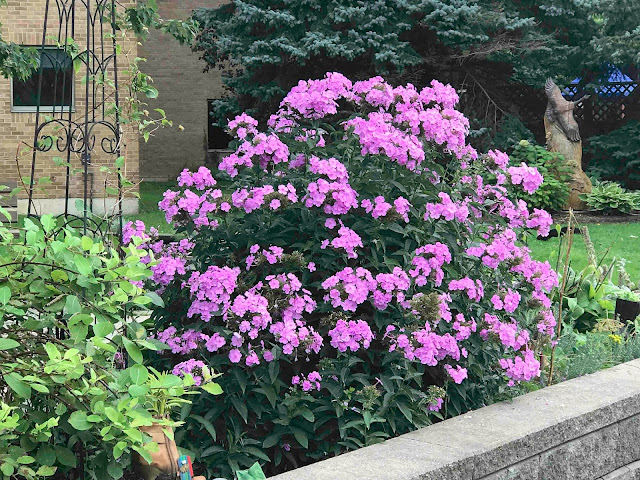 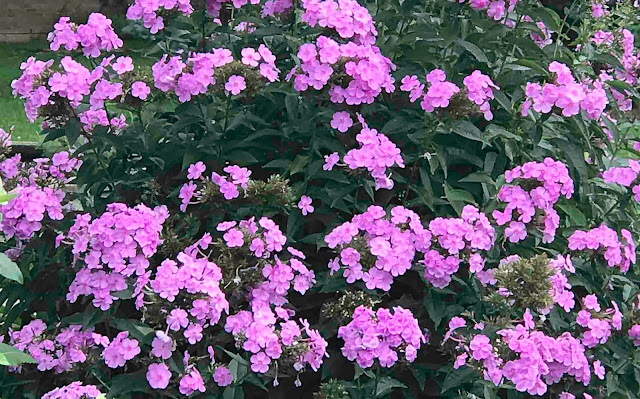 And this is a nice garden Phlox, blooming in the gardens of Parkwood Hospital, which I photographed last summer.  If you look closely you'll see the flowers have 5 petals, not 4.  There's also a seasonal difference in blooming.  Dame's Rocket is in bloom now, while Phlox doesn't usually bloom until August.

We don't think of Dame's rocket as invasive here, but across the prairies, from Wisconsin to southern Alberta, it is a seriously troublesome invasive species.