More Beyond the 7th Line

As we head north toward Meaford, there are more favourite sideroads and the secret places I can explore down them.  Let's start with the wetlands. 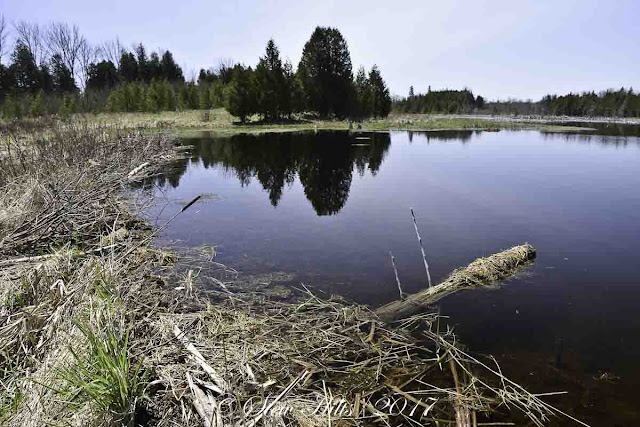 Down one of the sideroads is a Bruce Trail property known as the Young Wetlands.  It's a large beaver pond, with a stream flowing over the dam and downstream.  I was able to get partway out on the dam to get this picture. 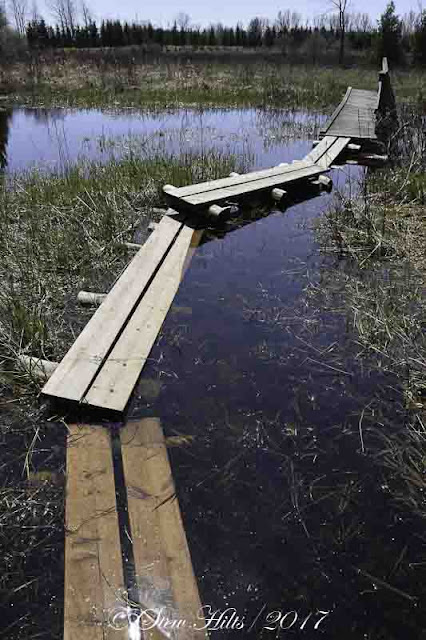 The beaver seemed to have been absent for a few years, but then they returned, raising the dam, and building a series of smaller dams downstream, flooding the trail crossing.  It ended up far worse than this picture shows, and an entire new crossing had to be built last year.

There's another big beaver dam and wetland down one of the other sideroads, this one on Wodehouse Creek.  I've explored around here several times too. 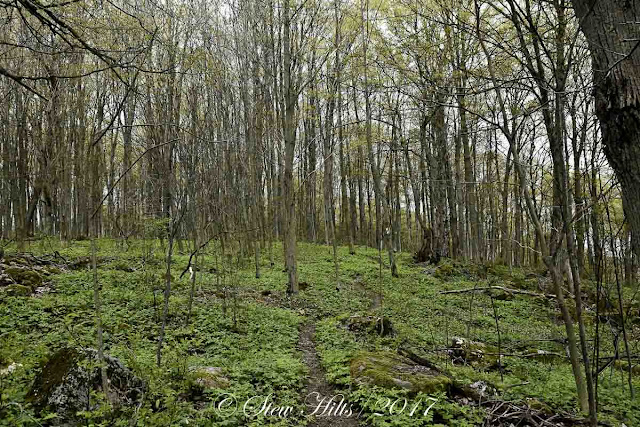 Then we hit the Bruce Trail itself, in this view heading west from the 7th Line through some nice deciduous forest. 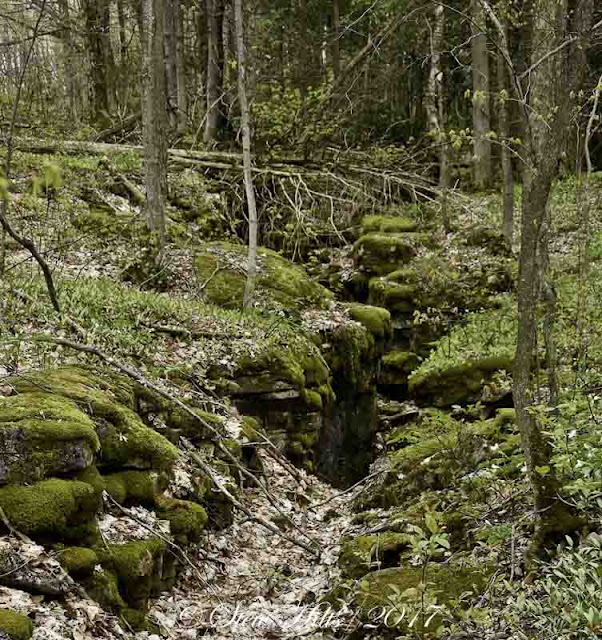 The first stretch of trail here is riven with several mossy crevices in the limestone, a common pattern along the edge of the escarpment cliff.  And a great place to hunt for ferns. 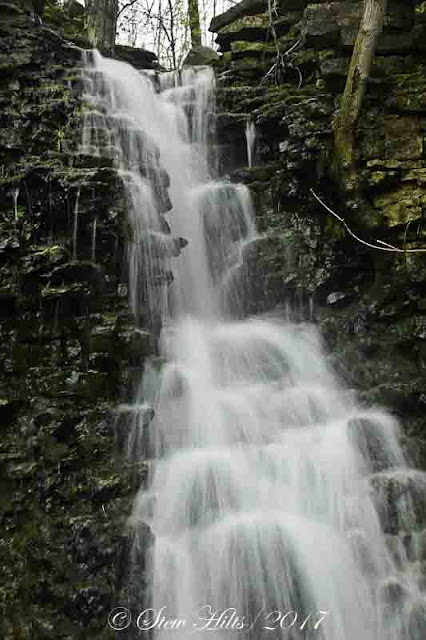 There's also another ephemeral waterfall here, a waterfall that only flows in the spring.  We had to climb down a short cliff to get this picture; exploring comes with its own adventures! 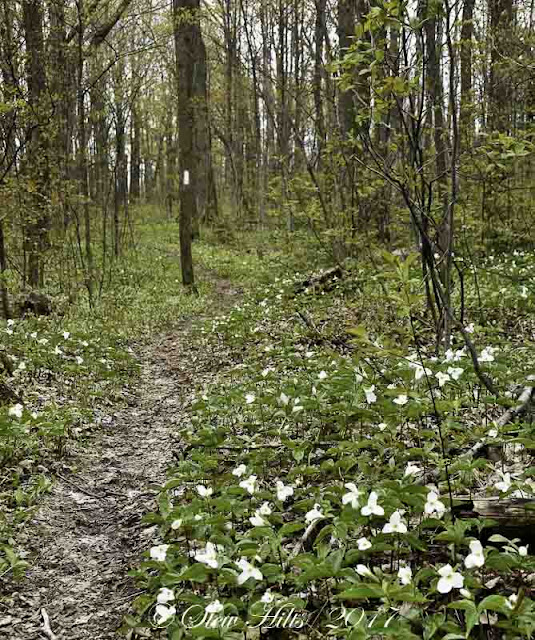 This stretch of trail will only be 10 minutes from our new home, so I'm sure I'll be back here regularly. 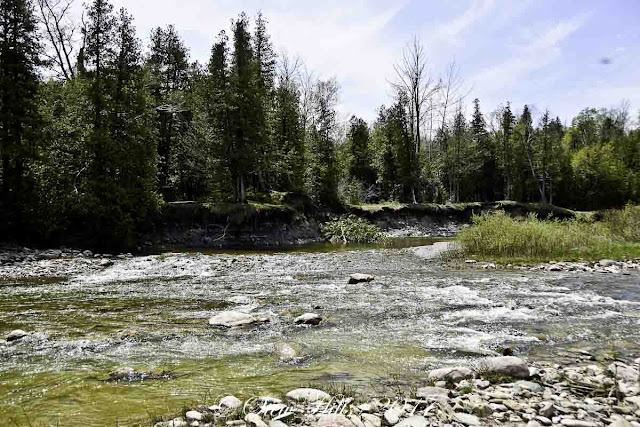 Finally, along the Bighead River near Meaford you can follow the Trout Hollow Trail downstream past the site of the sawmill where John Muir worked in the 1860's.  This would have been the view from the front of the cabin where he and other mill hands lived. 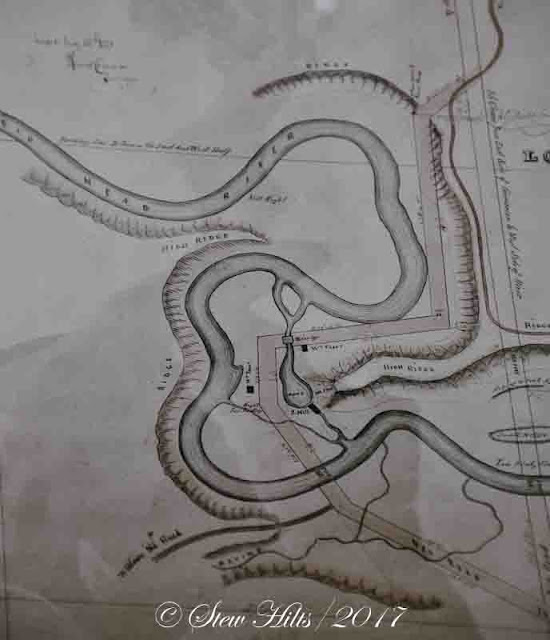 We know exactly where the cabin stood because of both this extant map, and some archeological work.  Muir also did a sketch of the cabin, kept a journal, and wrote letters back to a family here after he left Meaford, heading first south and then west. 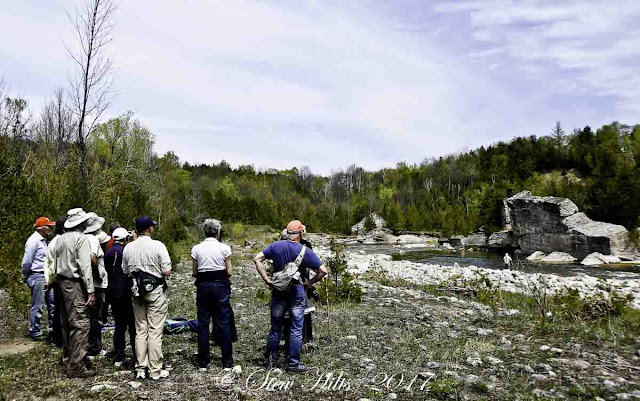 Just upstream is the ruins of an old hydro dam, which is another fascinating story.  It never lasted long as it was washed out by a big storm a few years after it was built.

Hope you've got the idea that the landscape here has lots of spots of interest for me to go exploring.  From our present home I drive north to these spots, from our new home I'll be driving south, but I expect I'll still get back to many of the same places.  Today was a wonderful late summer day, cold in the morning and tonight, but very nice during the day.  We got a lot of work done outside potting up plants we're going to take with us.