It was long past time to wash the dust off my canoe, and I have been wanting to see the claybanks from the water where you actually get a good view of them.  So we put in at Christie Beach, and paddled west on Georgian Bay, picking a sunny day with little wind so the bay would be calm. 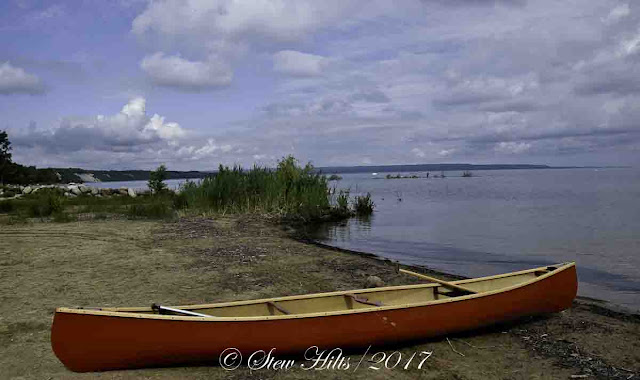 The long delay in getting my canoe on the water this year reflects how busy we've been.  This won't be happening next year after we move!  More time for this sort of stuff! 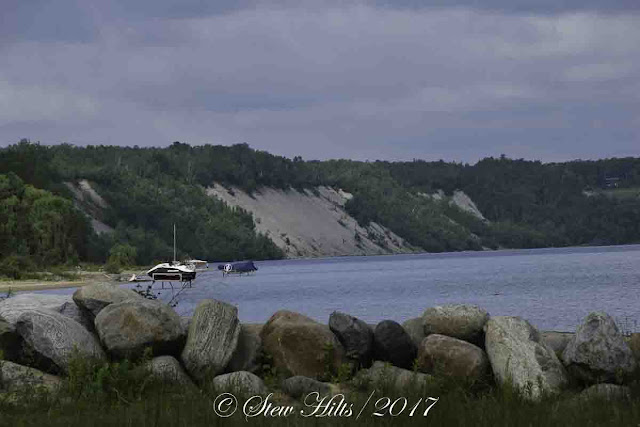 You can see the high steep claybanks along the shoreline from the beach where we started.  Most of the beach is private, but there's a small public park where the road meets the shore.  I've only seen them from standing at the top, when we walked in the trail to see them.  But you get a VERY different view from the shore or the water! 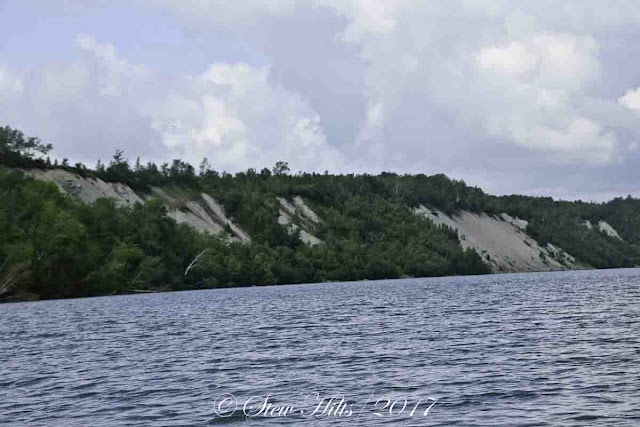 We paddled for quite a distance, probably over 2 km, with the claybanks on our left, ... 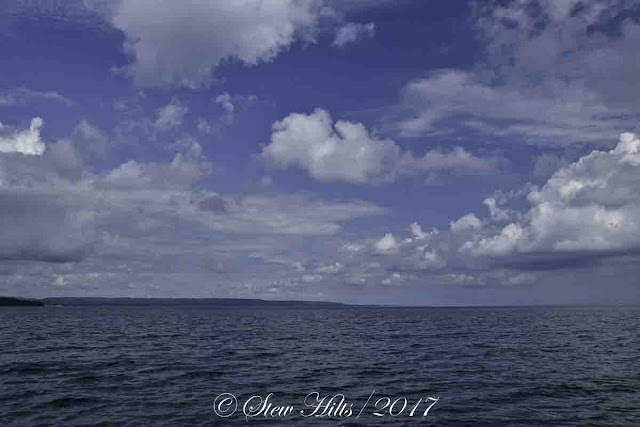 ... and Georgian Bay on the right.  You can see the Bayview Escarpment above the tank range in the distance and a tiny bit of white on the water at the left which is the sailboats and tiny lighthouse in Meaford harbour.

The claybanks are more varied than I expected, with shallow gullies, trees growing on some parts of the steep slopes (often leaning downhill) and erosion creating an uneven appearance. 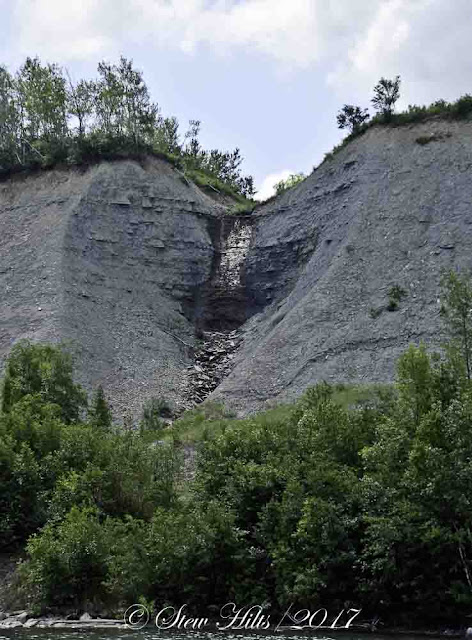 The gully on the left in the upper photo seemed to have a small waterfall or seepage eroding into the shale.  You can see the bluish-grey colour of the shale where it's eroded here.  The claybanks are a huge thick layer of shale, below the bottom of the Niagara Escarpment known as the Georgian Bay Formation. 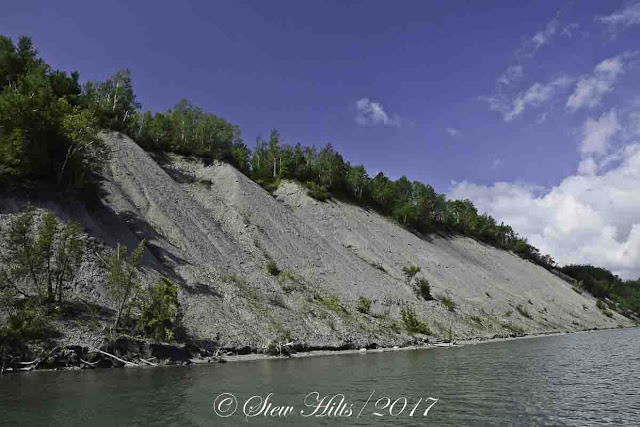 Then you come to the broad open slopes of the highest, steepest part of the claybanks.  This is the only part I had seen, and only from the top.  If you want to read about that visit, check it out here. 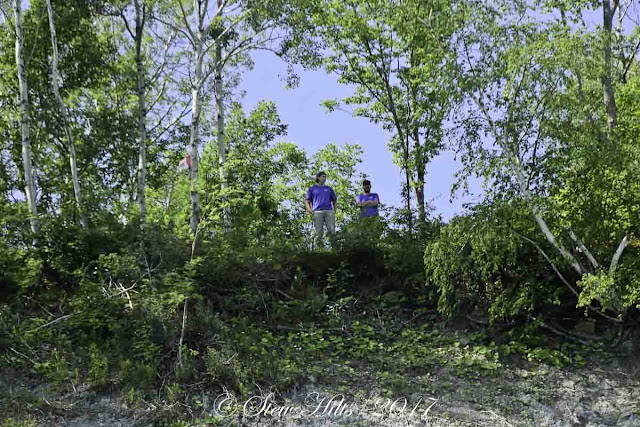 I actually spotted two people standing at the top, presumably where the trail comes out to the edge. 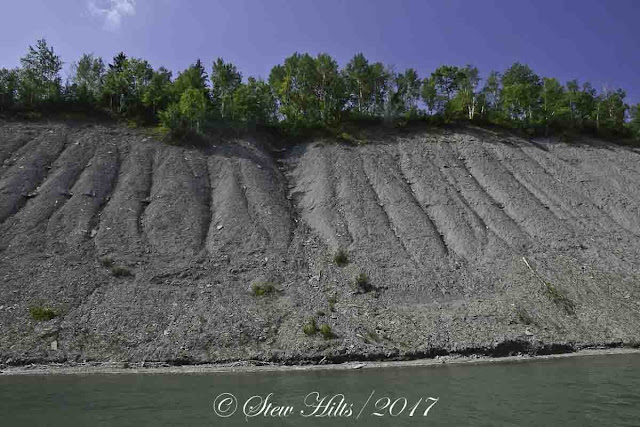 Can you see them in this photo?  They're about 2/3rds of the way across the top from the left, in a clear spot to the left of two white birch trees.  You can use their height to estimate the height of the cliff. 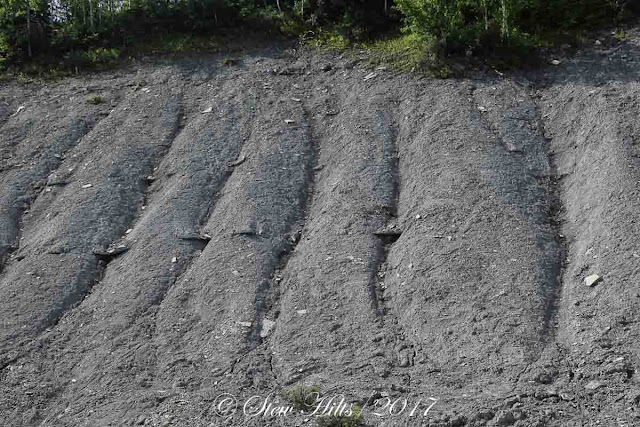 This formation is almost pure shale, with only a few very thin layers of limestone.  I'm not sure it would be physically possible to climb this slope unless you were outfitted with spikes and an ice axe for mountain climbing! 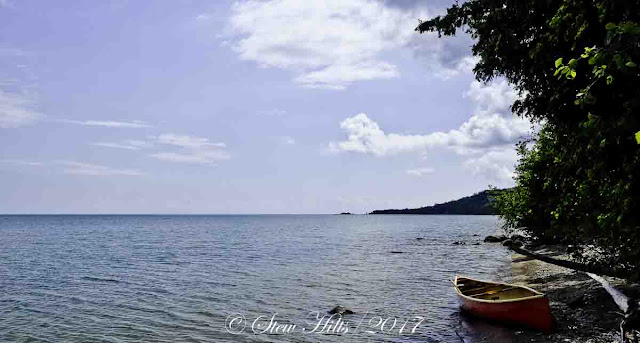 After nearly an hour we pulled into a tiny narrow beach beyond those open slopes and enjoyed our lunch, before paddling back to the east.  A good adventure - a beautiful day and a new place I've been wanting to see.  And the dust is now washed off the canoe.