There's a significant salmon run in Owen Sound, where the salmon head up the Sydenham River.  The town promotes a 'Salmon Tour' where you can see the salmon.  About 2 weeks ago I stopped by the fish ladder to see if I could spot anything. 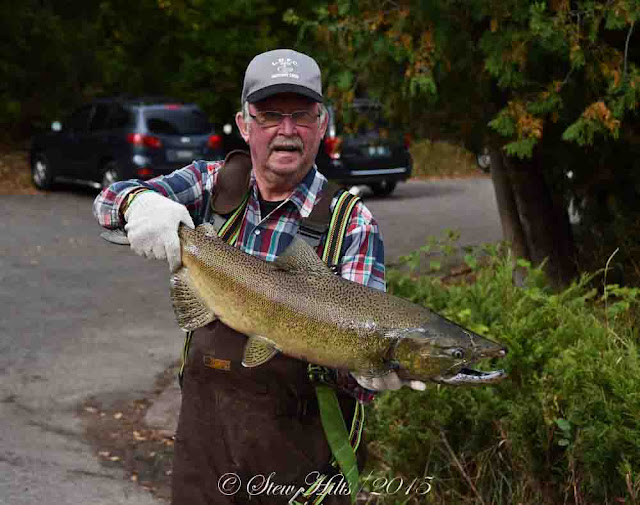 Lo and behold, I turned up at the fish ladder just when a team from the Sydenham Sportsmen arrived to collect eggs for the hatchery!   Apparently they catch the salmon here and collect eggs not only for their own nearby hatchery, but for several other hatcheries in southern Ontario. 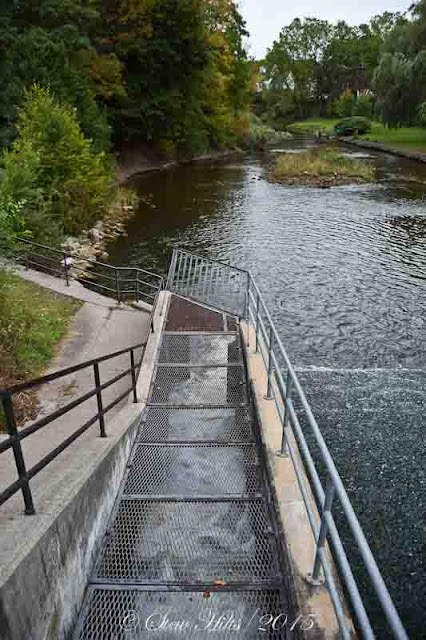 This is the fish ladder, a separate channel the salmon can use to bypass the mill dam.  It's been rebuilt, but the original fishway here was the very first such structure in Ontario.  They release 200,000 fry from the hatchey upstream every year. 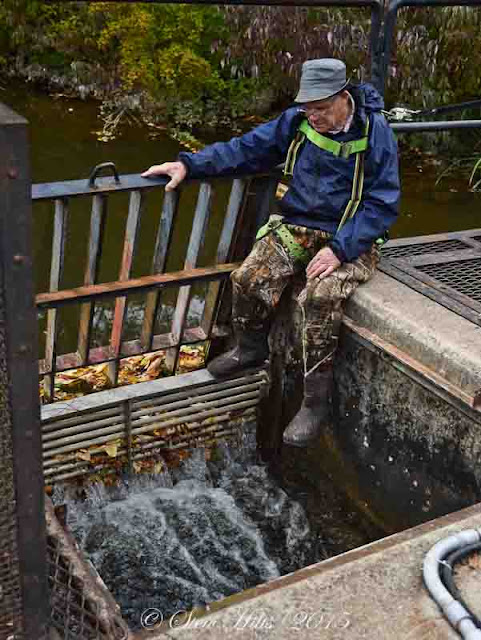 First they take the protective grate off the top of the fish ladder - with appropriate warning signs and safety harness all in place, as well as ropes to hold back the gathering crowd of photographers. 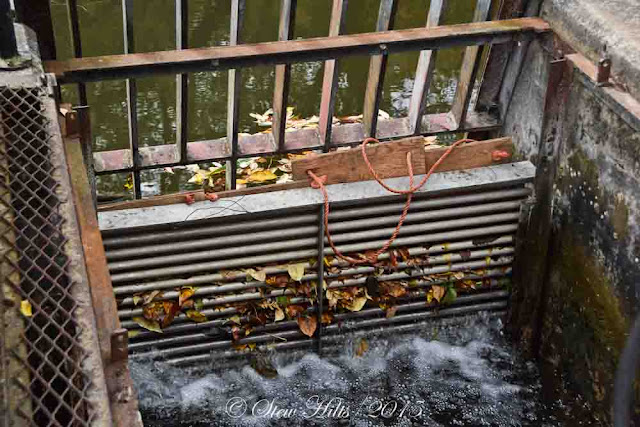 Then they slide sheets of plywood down to cut off some of the flow into the fishway, calming the water lower down. 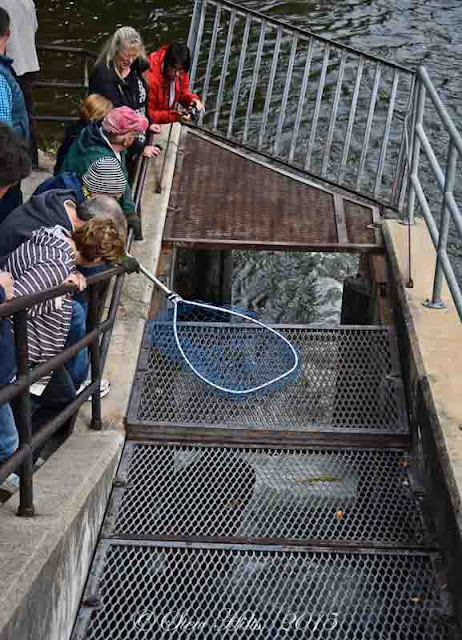 Down at the bottom they take off the protective grid, and a fisherman climbs right down into the channel, with a big fish net.  (Can you make him out below the wire grid?)  He simply hunts up and down the baffles, and scoops out the salmon. 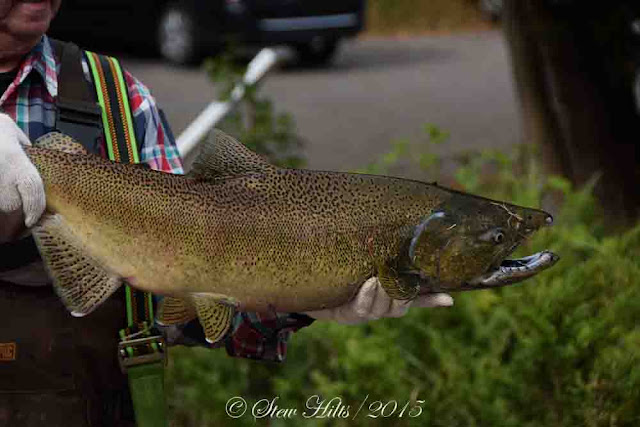 Today they were apparently after just 6 fish; they didn't have any difficulty getting them, in just a short time.  Then the eggs were collected, refrigerated, and taken off to the hatchery. 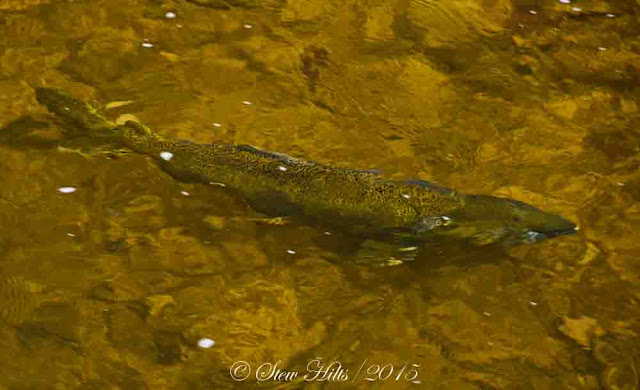 I took a moment to stop at the bridge in Harrison's Park too, and there were lots of salmon in the river.  Can you make out two salmon swimming very close together here? 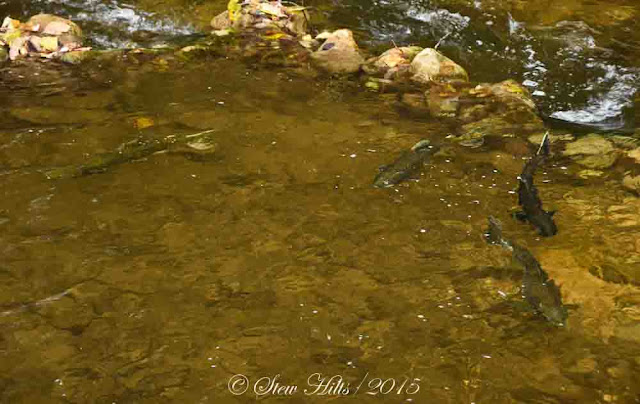 All of these salmon had made it upstream through the fish ladder, though they probably wouldn't make it a lot farther, as they will run in Inglis Falls further upstream.  There are lots of shallow channels here suitable for spawning though. 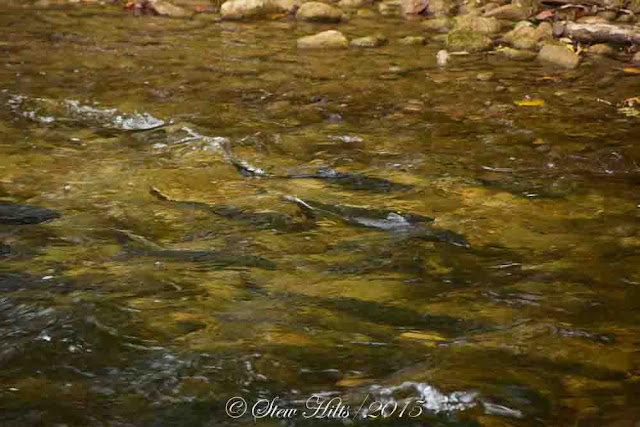 See how many fish you can count in this picture!  Parts of the river were thick with them.

Yesterday was the Canadian election, and the Liberals won a majority government, I'm sure surprising even themselves.  There are policy differences, but I'm not sure how much difference they make in the long run.  But Trudeau and the Liberals ran a positive campaign, without attack ads, and without promoting divisions in Canadian society, unlike their opponents.  The Conservative party lost not so much because of their policies, as because of our former Prime Minister's way of doing business - total control and fear.  This election result is a huge step in a better direction for Canada!