I did manage to get down to see the ephemeral waterfall where lower Wodehouse Creek plunges over the Niagara Escarpment cliff on the weekend.  It was quite an expedition!  I wrote about the sinkhole a short distance upstream overflowing last Thursday and Friday, and by Saturday it was much more than a roaring torrent from the spring melt. 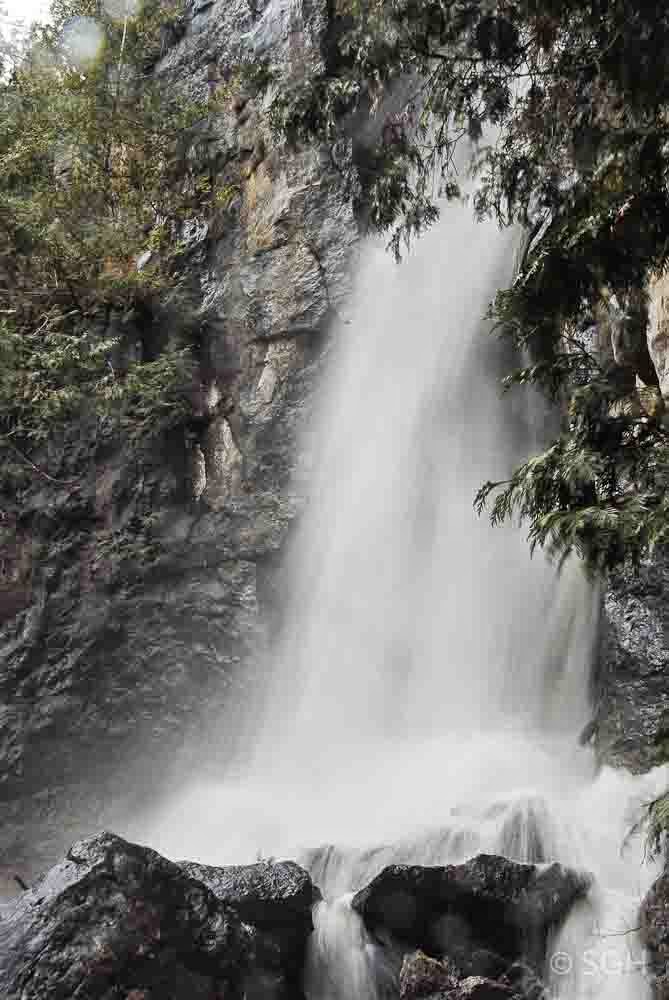 I could hear the roar as soon as I headed down the ski run to get there, and when I arrived, it was like being at the base of a 6 foot wide piece of Niagara Falls!  There was water spraying everywhere as it smashed off the boulders at the bottom, and runoff tumbling down, around and over the boulders in a wide circle below the cliff.  It was the most rip-roaring waterfall I have ever stood beside, and it will probably only last 2-3 weeks. 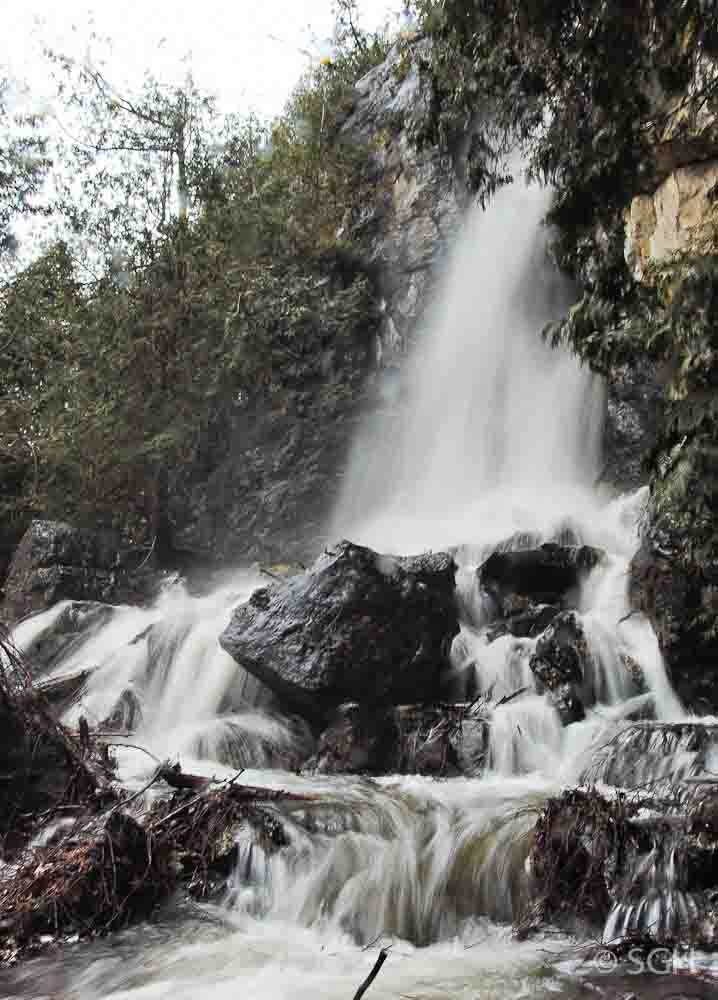 I could not get anyplace close to out in front for a full view of the falls, there was so much water headed downhill below it.  And you're only looking at the bottom half of the falls here.  I had to really watch my footing as I crept as close as possible for pictures. 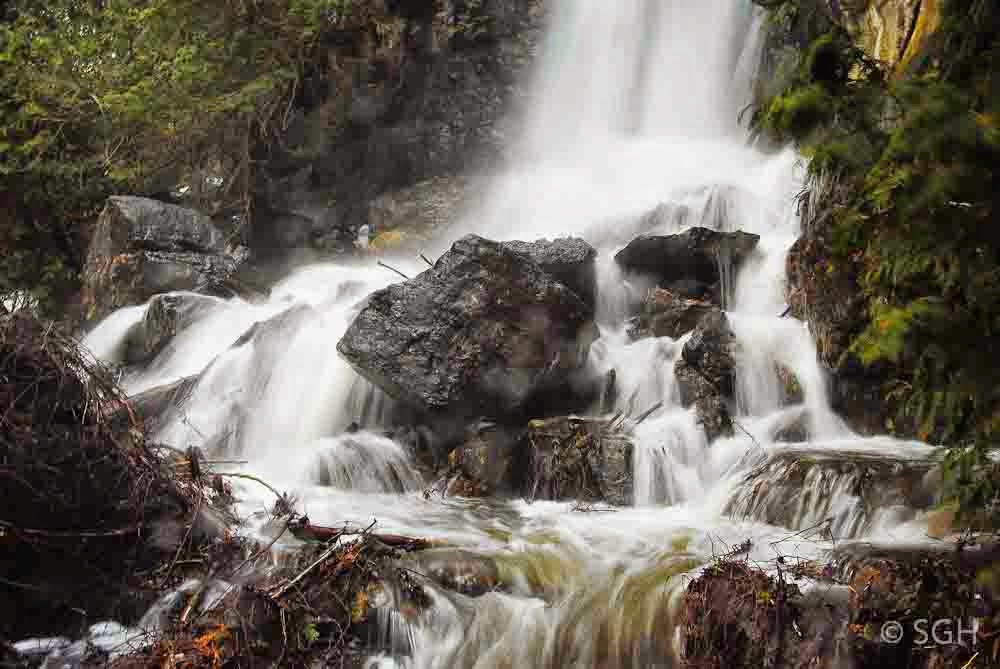 When I climbed down to see the falls last November, I was standing on top of all these rocks, just to the left of centre in this picture.  The falls actually fills a crevice in the cliff 6-8 feet deep (see 2nd picture below); here it is exploding out far beyond that   I had to wipe off the camera lens between shots from the spray. 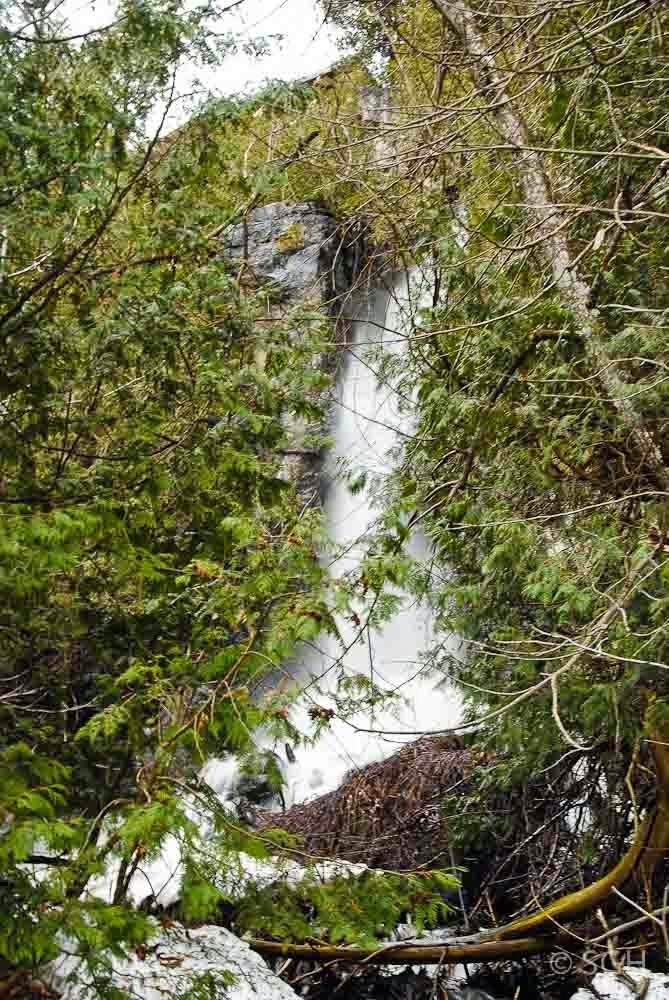 I did creep down the slope and around below a little to see if I could get a more complete view.  This is most of the falls, but hidden behind trees.  The picture below, taken last November, was taken from a point amidst all that white spray at the base of the falls in the photo above! 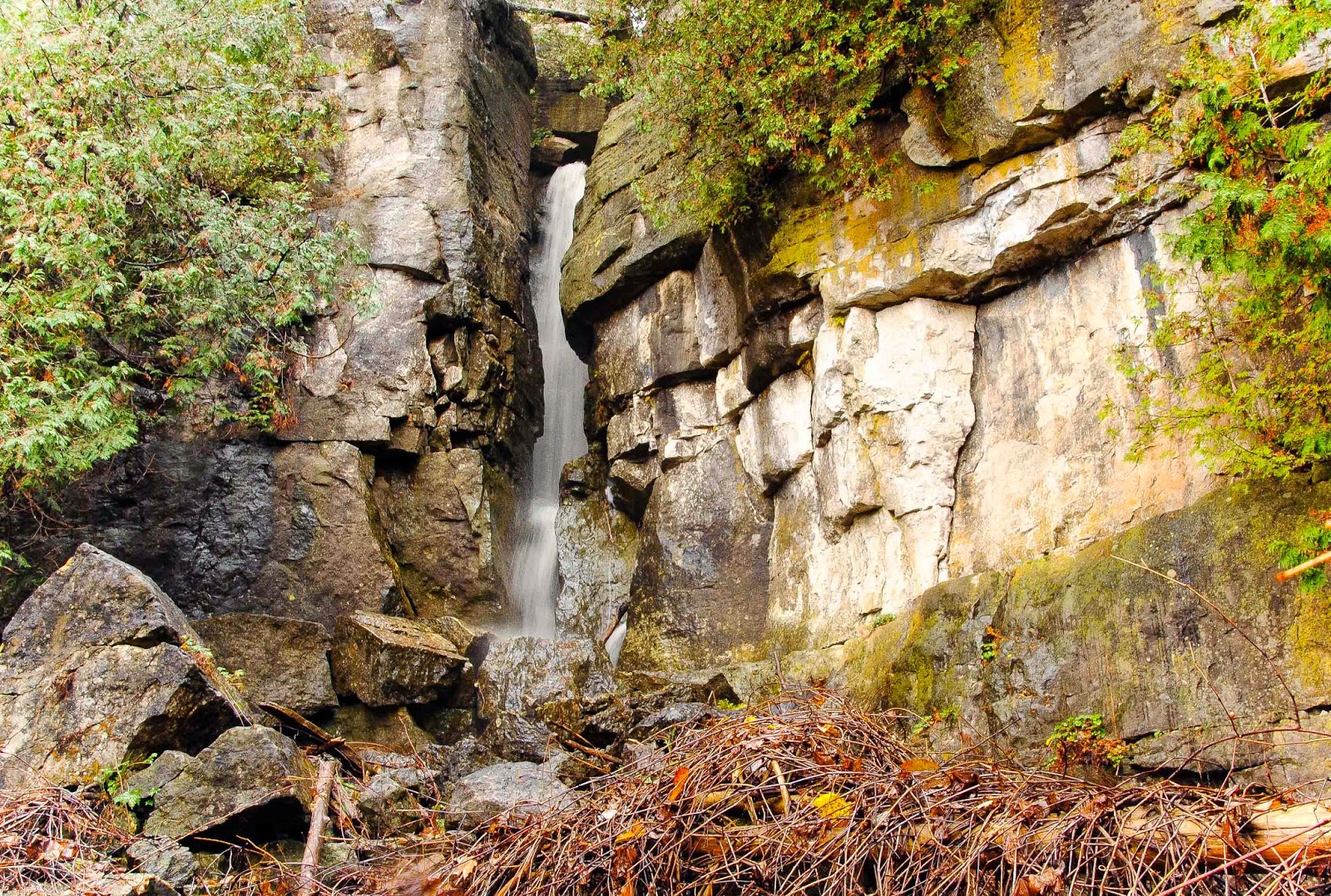 The falls flowed for about three days last November, after 3 weeks of heavy rain.  I thought it was amazing at the time, but now I realize that this was just a trickle compared to today during spring run-off!  I was much more confident going down this time because I knew what I was getting myself in for, and though it's a challenging climb down, it isn't far. 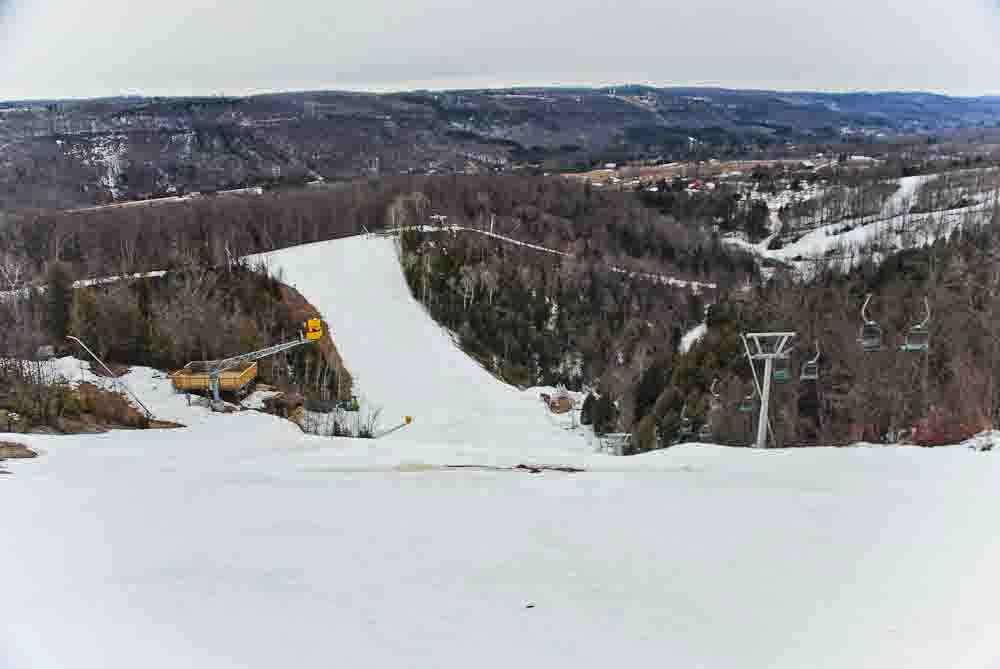 The biggest challenge getting there was traversing across Avalanche ski run, an extremely steep 'double black diamond' slope that you would never catch me on on skiis!  I had both my snowshoes and ski poles, and crossed this slope step by step with the poles planted firmly in the packed snow.  It seemed like about a 45° slope.  You're looking down into Bowles Gully in the upper Beaver Valley here, a gully carved by this waterfall in post-glacial times. 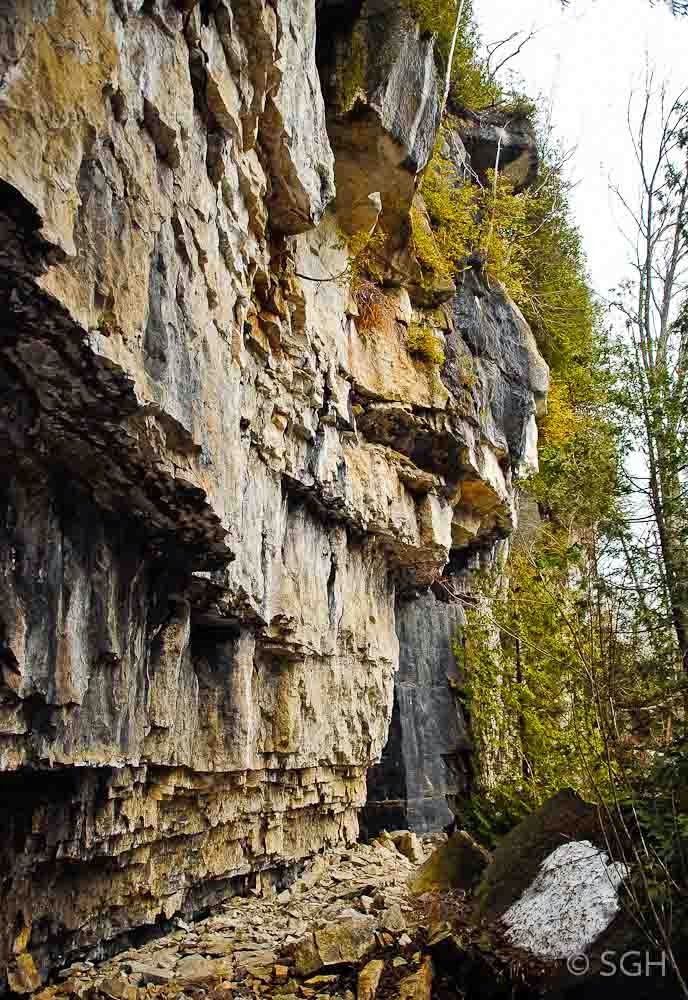 After that it wasn't too difficult, although there were some boulders to climb over.   It's about a 60-80 foot vertical cliff of Amabel dolostone, with a number of obvious vertical cracks and some looser layers of rock flaking off near the bottom from the frost. 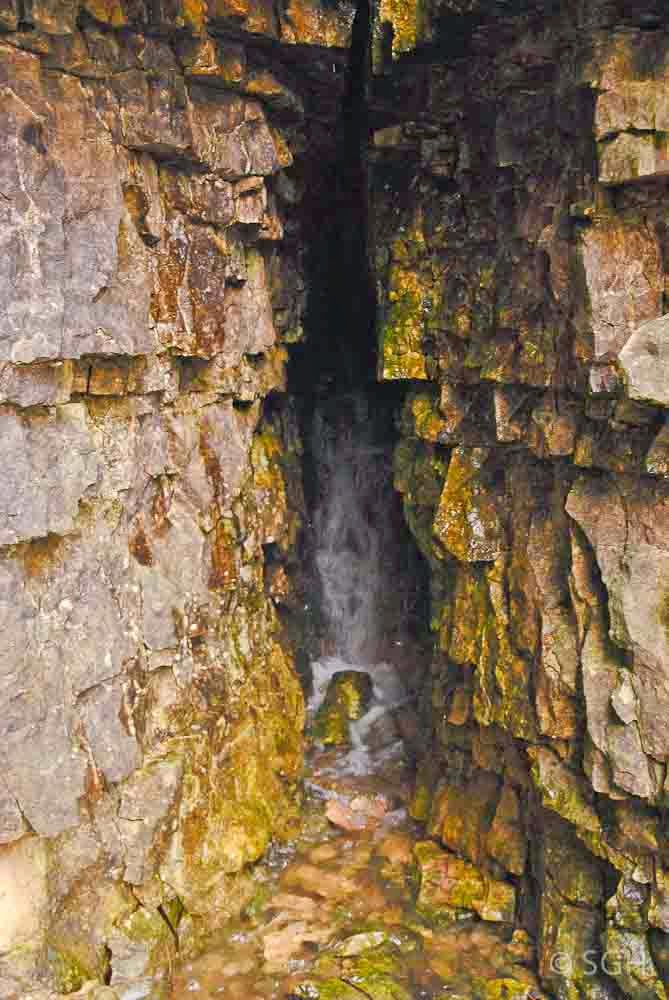 I've mentioned the cracks in this bedrock which the sinkholes drain into before.  This was one I passed at the base of the cliff, with a small tumbling waterfall right inside the crack. 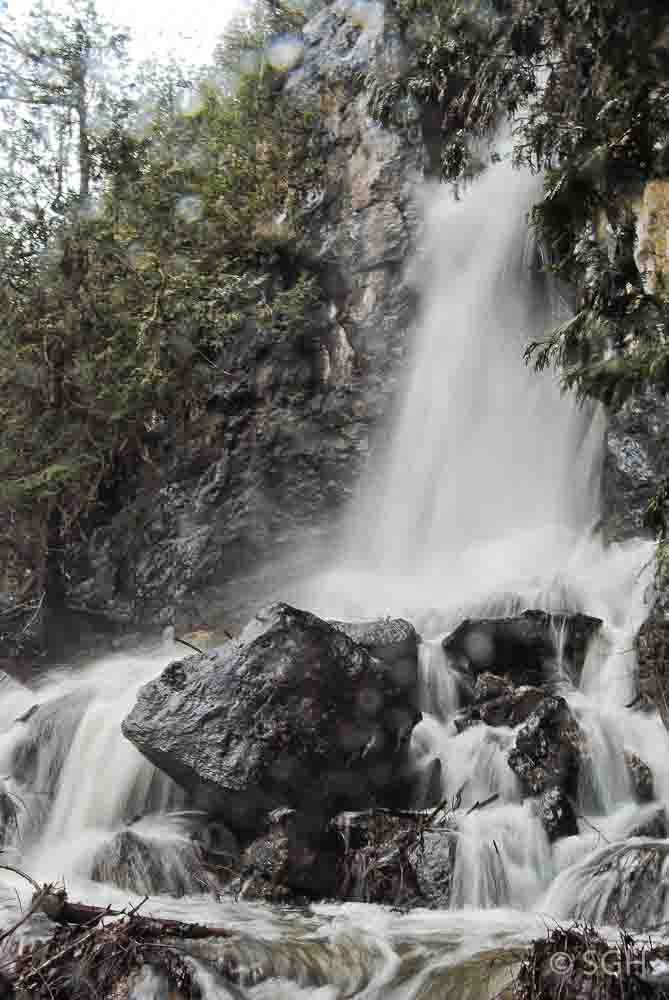 I really enjoyed the challenge of this expedition, and walked away with the roar of the waterfall in my ears, a memory I won't quickly forget.  I will now watch to see how long the waterfall lasts this year, and report back.  I may even go down for some comparison shots after it is finished for the season.  Thanks for joining me on this expedition!