Musing on the Month of April

I've been musing about how fast the seasonal changes happen in April.  I've always noticed this, but now that I'm thinking about describing what I see and take photographs of, I notice it more.  And this is a blog about the seasons in the Beaver Valley after all, so keeping track of these changes in the seasons is why I'm here. 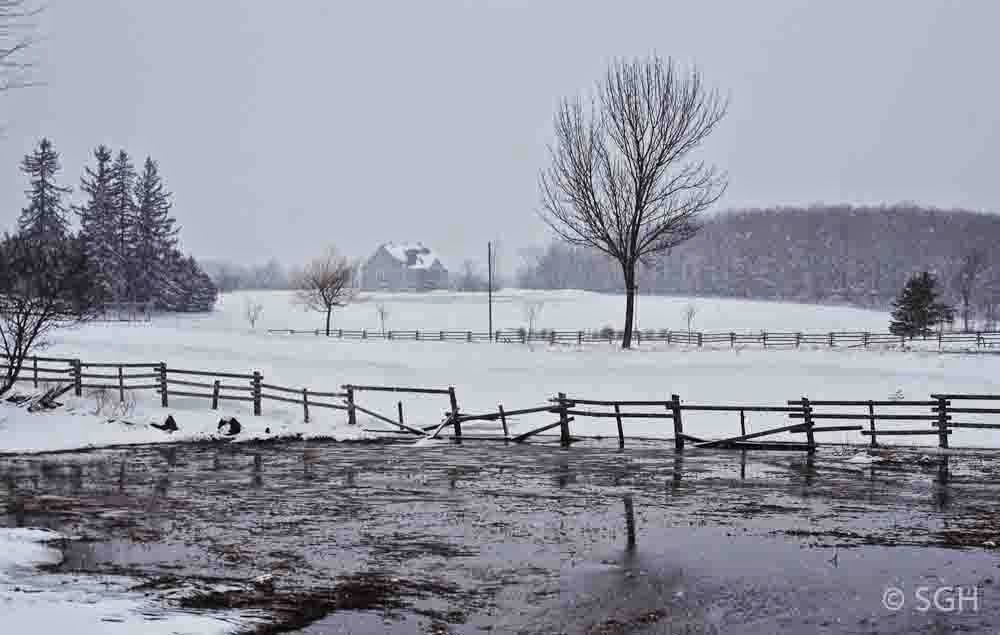 April started out this year snowy; the landscape was still white.  But the streams and the spots where seepage emerged at the edge of fields were opening up.  It was still like winter, but with a hint of things to come in the open bits of water. 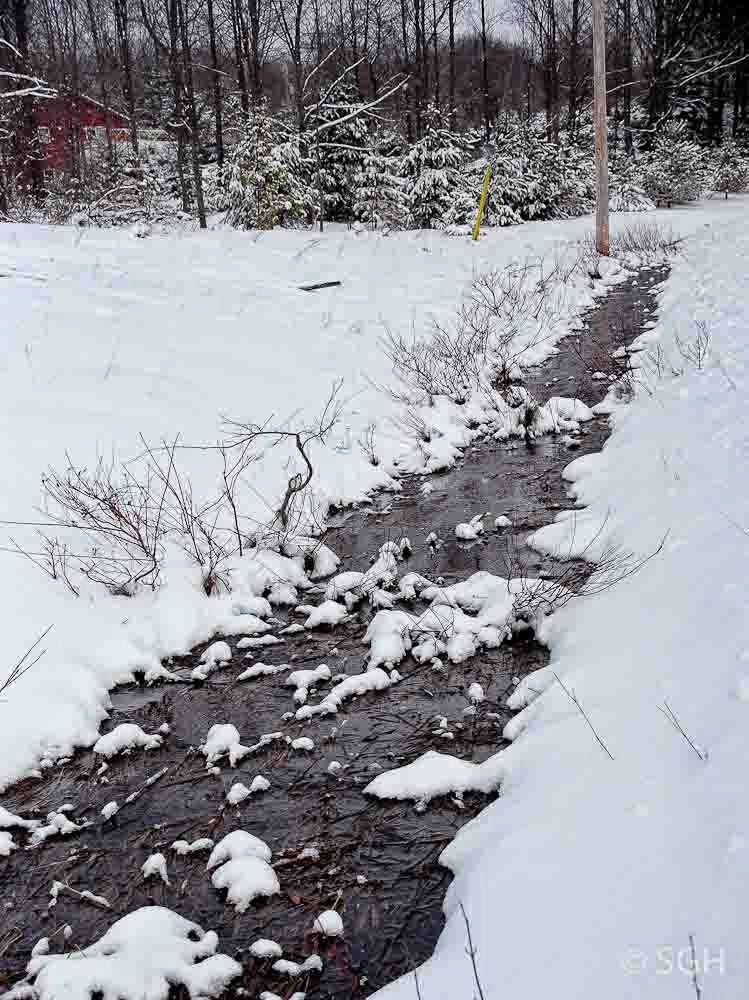 The snow was refreshed when we had a snowfall, as we almost always do in April, but the water was starting to run.  All kinds of small streams started flowing, ditches were filling, and wetlands were flooding while the snow was still here.  That's the first phase of the season in April - starting to melt, but still a white landscape. 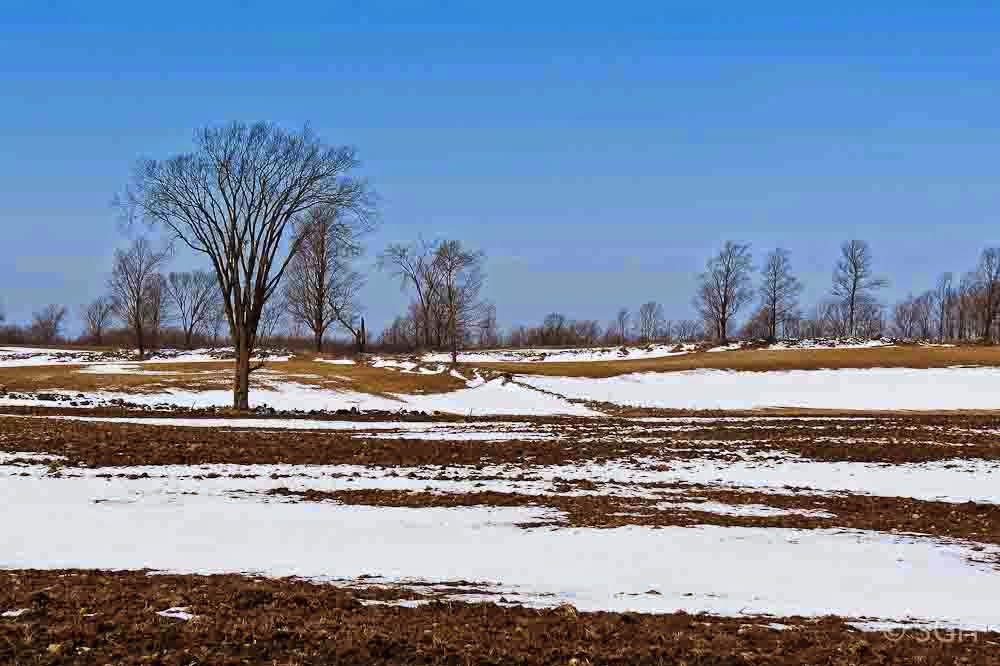 Then the snow started seriously melting, and we went through 2 weeks of a patchy brown and white landscape.  Wherever the snow was thicker it stayed longer, but fields were quickly turning to brown. 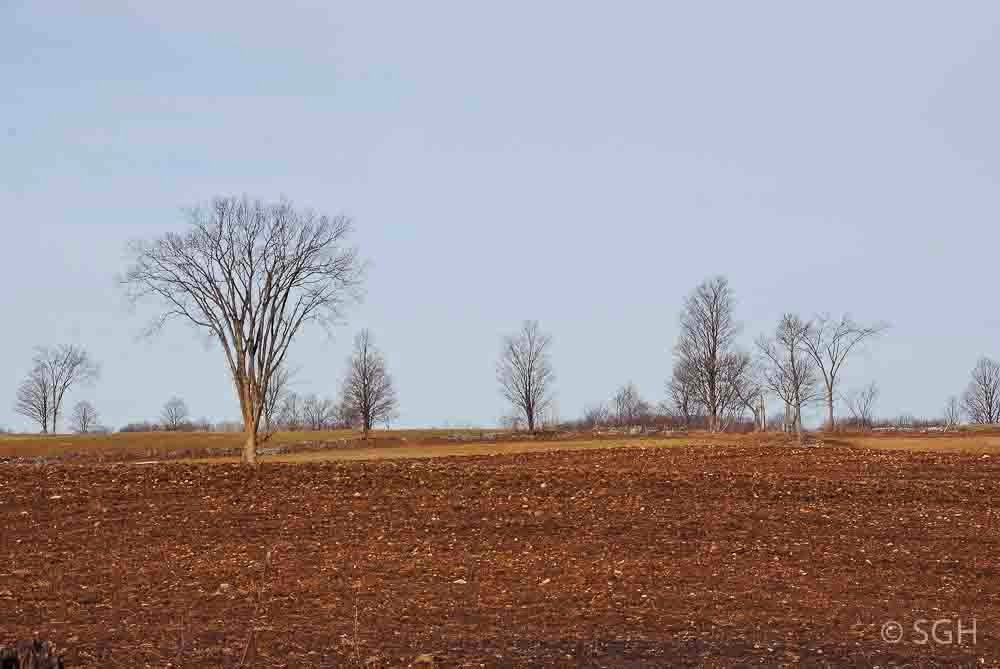 Within a remarkably short time considering the winter we had and the amount of snow on the ground, the white landscape was largely gone.  Only a few patches of deeper snow now remain on the lee side of hills and roadsides.  And the water from all that melting snow has to go somewhere. 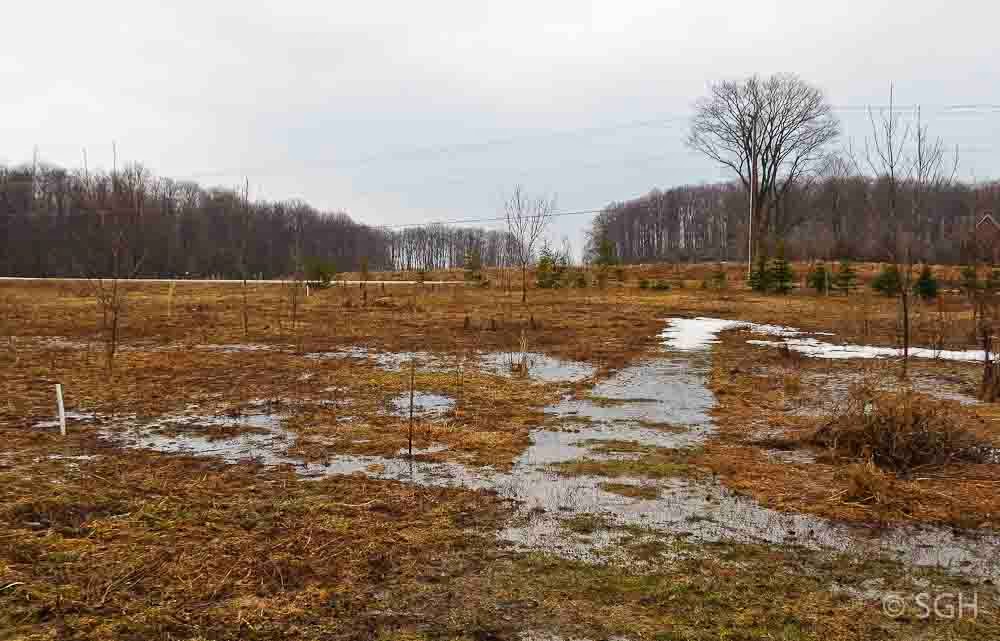 So for a short while in the middle of April this year, the landscape was just saturated.  Much of the snow actually evaporates, but enough melts to make things VERY wet for awhile.  This is our own backyard, with water in places where I've never seen it before - though it dried up (well at least the surface water disappeared) in only a week. 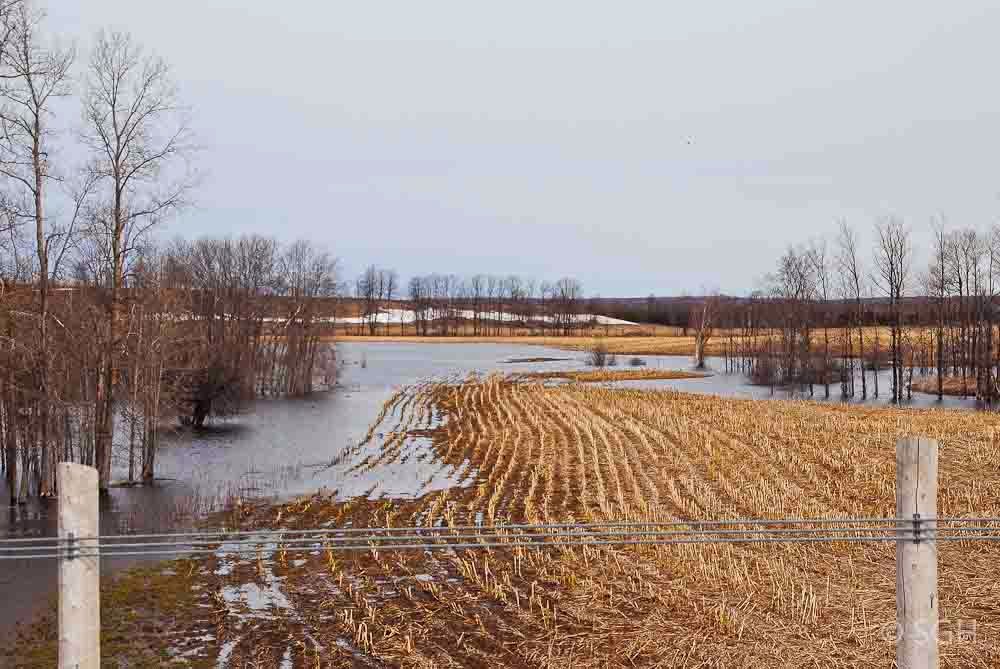 Temporary puddles formed in low spots all over the landscape.  You can hardly drive down a road without seeing large ponds in low corners of farm fields; some of these will take a long time to disappear this year! 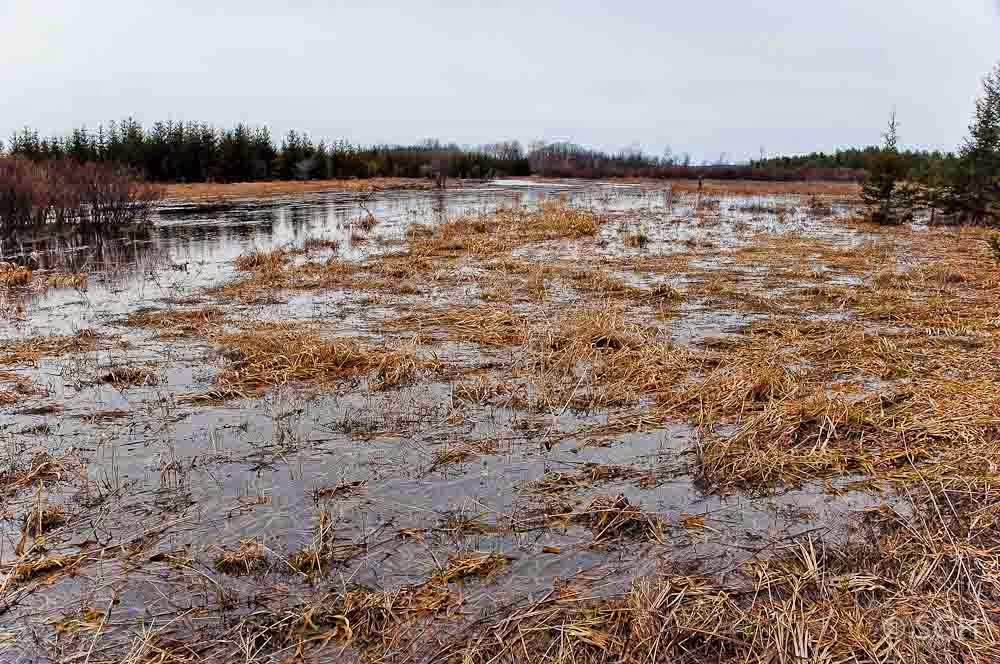 And the floodplains along all our streams were inundated.  We call this 'flooding', but it's a totally natural process, and as long as there is no development in the way, this sort of flooding does no harm.  In fact, ecologically, it's very beneficial.  These temporary shallow pools along floodplains are where Wood Frogs,  Chorus Frogs and others breed, leaving their eggs in the water waiting to hatch as tadpoles. This time when the landscape is totally saturated, and water is everywhere is the second stage of the April season. 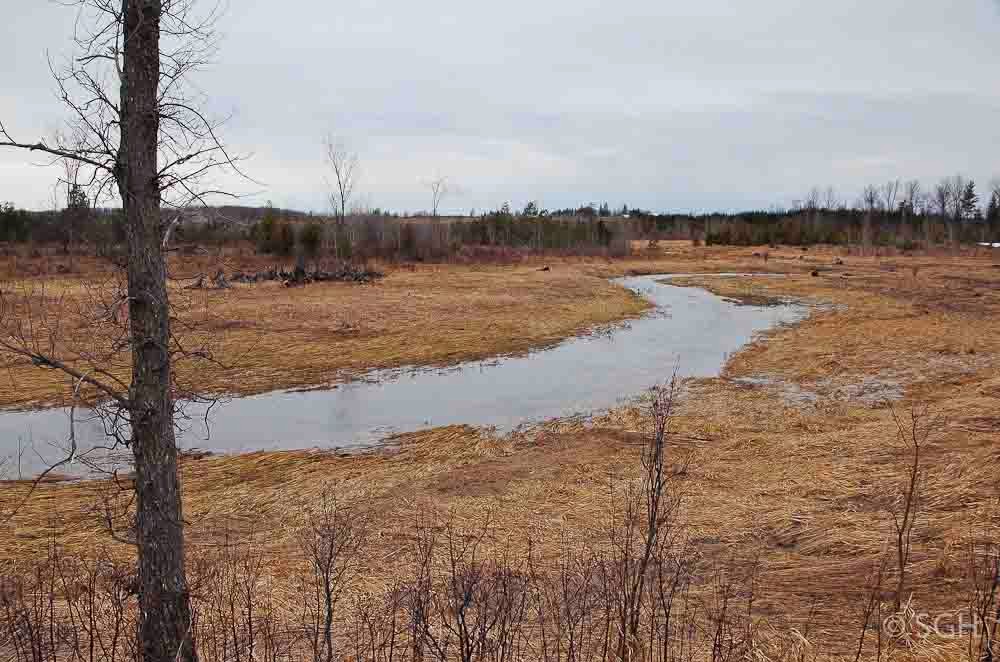 That saturated landscape with water everywhere only lasts a short 2-3 weeks though, and then streams subside back into their natural channels, what a hydrologist would call the 'bank full' stage of flow.  This stream was briefly as wide as the photo 3 weeks ago, and you can see that part of the floodplain is still a little wet. 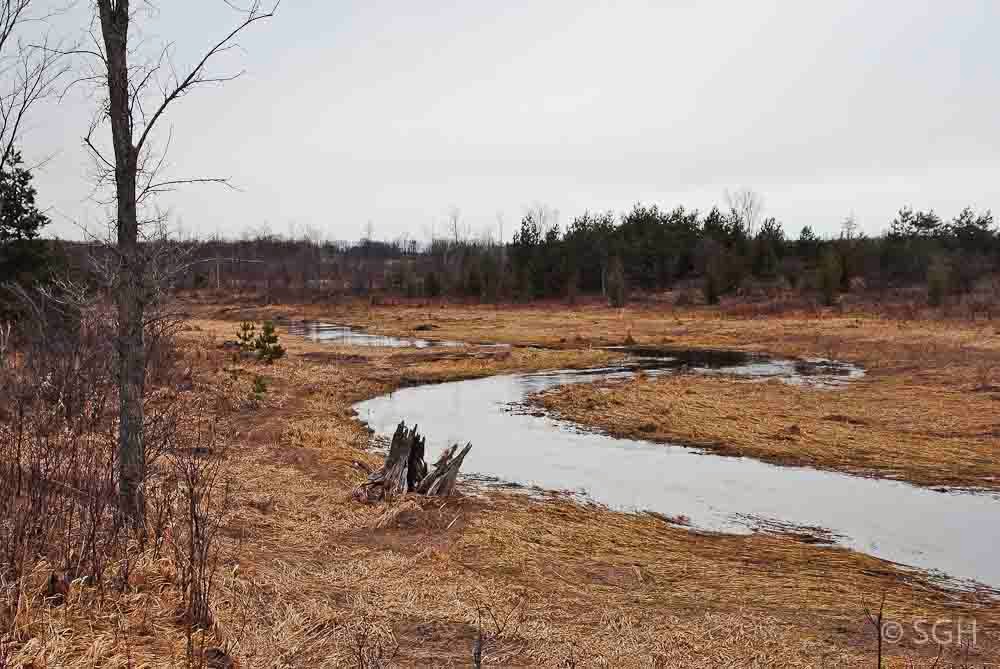 There is still lots of water around, but already on this last day of April we're starting to see a drier landscape.  I can get out in the yard to start gardening, and in the flooded wetlands and fields the water is retreating.  So this is the third stage of the seasons in April - we move from streams starting to flow in a still snowy landscape, through a very wet period of spring melt, to the beginning of normal drier conditions and the final disappearance of snow.  Spring flowers and more migrating birds won't be far behind.

These photos don't compare to the bright spring flowers and blue skies, but these are part of 'seasonsinthevalley' too, so I hope you appreciate my musings!