Would you believe, one of the most searched for pages in my 3 years of blogging is a post I did on poplar fluff about this time 2 years ago.  I think it's popularity must be due to there being little written on the topic, and in some places (like Edmonton) there is so much that it's a nuisance.  People want to know what it is, so here's the true, detailed story: 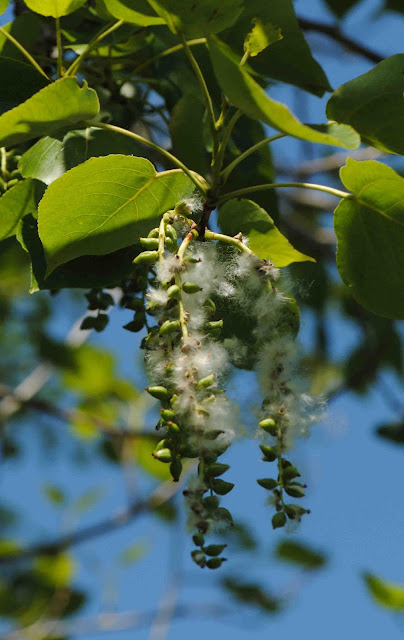 Poplar trees produce their seeds in catkins, which hang unpollinated on the trees in early spring.  Once they are pollinated, green seed capsules form (above), and when they break open the seeds are released, each carried by a tiny parachute of fluff.  This is what you see stuck in the tree, floating through the air, or lying on the ground (below). 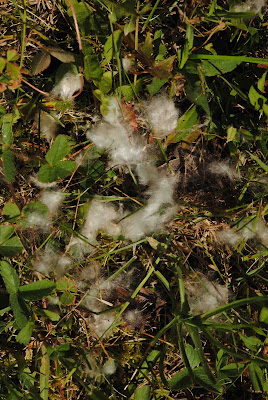 Sometimes the fluff accumulates on the ground so thickly that it looks like snow!  Google 'poplar fluff' and choose 'Images', and you'll find pictures from cities like Calgary or Edmonton (where poplar are one of the most common shade trees), where the ground is white.  Headlines reassure residents that it is not allergenic, and in Moscow, the mayor is 'going to save the city from the fluff'! 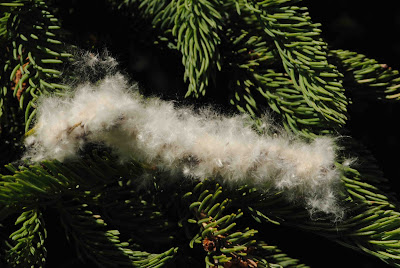 We don't get nearly that amount of fluff here, just a little floating through the air like big snow flakes, or a bit on the ground.  Here's a full catkin covered in fluff that fell off on one of our young spruce. 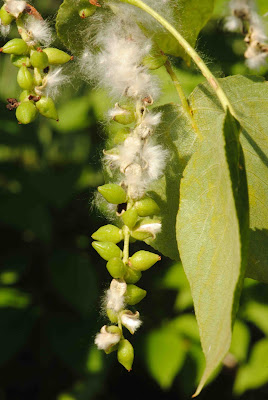 If you dissect this story, you find that there is an intermediate stage of seed pods or capsules forming, shown in green above.  These develop after pollination, but they are not seeds, rather they are the containers for the much smaller seeds with their parachute of fluff. 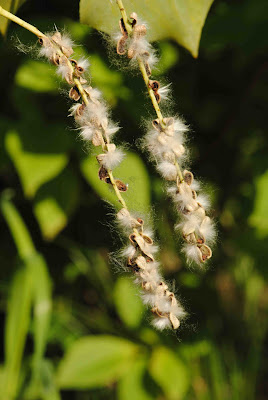 As these capsules dry out, as they do in late June, they turn brown and split open, releasing the tiny seeds and fluff.  This is the event that brings the 'snow in June', and decorates your lawn with bits of white. 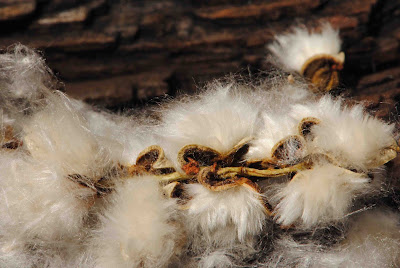 A close look shows the dry, split capsules along the catkin, and the fluff bursting out.  In comparison, a single seed with it's attached fluff is miniscule - see below.  And that's the story of the poplar fluff. 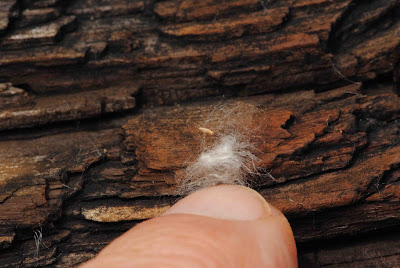 Email ThisBlogThis!Share to TwitterShare to FacebookShare to Pinterest
Labels: Trees