The other day I led a fern identification walk near Inglis Falls in Owen Sound.  Nineteen people came along to learn to identify ferns.  And we had a great walk.  It had rained over lunch, but the rain stopped, and by the end of the walk it was actually sunny.  These photos weren't taken during the hike, but these are three of the rarer ferns we saw along the way. 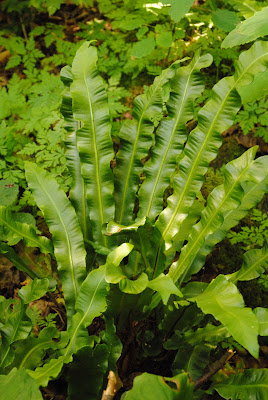 This is the Hart's Tongue Fern, limited to habitats along the Niagara Escarpment between about Shelburne and Lion's Head, and almost nowhere else in North America!  Although endangered because of it's limited distribution, it can be found regularly in the right habitats along the Bruce Trail. 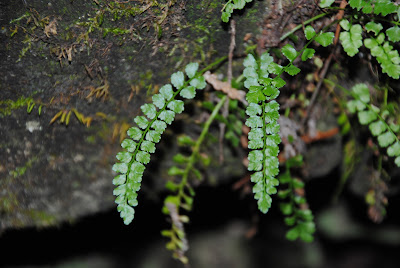 Most people who walk the Bruce Trail are familiar with the tiny fronds of Maidenhair Spleenwort.  But if you look closely, you'll see this version has a green stem up the middle of the frond, only about 2-3" long.  This makes it the much rarer Green Spleenwort, found only in cooler-than-normal crevices along the escarpment. 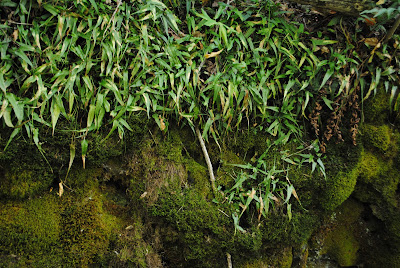 And this is the Walking Fern, found typically on larger mossy boulders below the edge of the escarpment.  The fronds are long but very thin, from less than an inch wide extending out to a very narrow tip.  Sometimes the tip roots and a new plant forms, giving it its name - the plant 'walks', forming larger mats of  plants on the boulders.
Posted by The Furry Gnome at 9:35 PM