Frogs in the Wetland 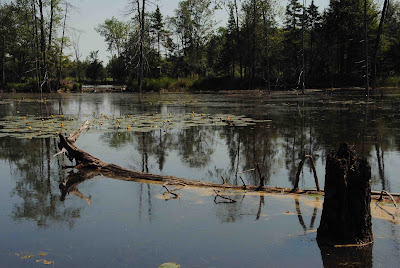 I promised some pictures of the frogs we saw Friday at the Flesherton Hills wetland, so here they are.  The large beaver pond was circled with reflections, dotted with lily pad rafts, and lined with scattered fallen logs.  Ideal frog habitat, and frogs were there by the dozen - at this time of year it's the big bullfrogs that are out and about most, calling their deep chug-o-rum - sitting on logs, on the mud, or in the water, just their head above the surface. 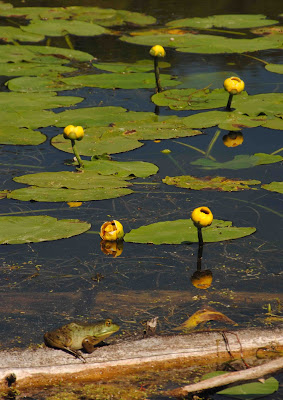 A closer look begins to reveal the individual frogs.  We didn't look for long, they were so obvious.  I'm sure if we'd hunted we have found hundreds.  This one was sunning on a log looking over the lily pads, and presumably waiting for a fat fly to buzz by - or for a mate. 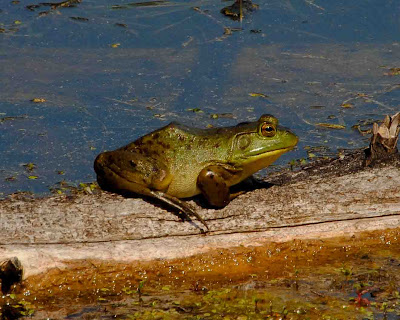 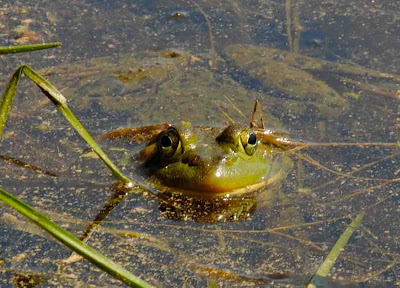 Those in the water were harder to spot unless they were close like this one, but you could see scatted little 'bumps' out on the water here and there - probably similar frogs just above the surface. 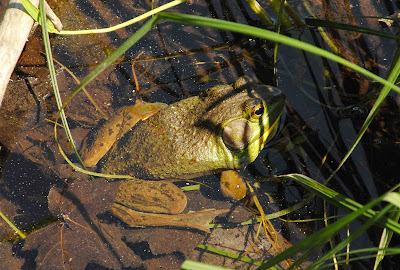 This one kept it's nose in the shade of the wetland sedges, but you can see the large round 'tympani' or eardrum, just behind the eye.  Significantly larger than the eye itself, this marks this frog as a male.

I was very surprised to read in this month's Canadian Geographic that while bullfrogs are native to eastern North America, they are a very serious invasive species in British Columbia.  Their huge tadpoles (compared to other species), eat the other tadpoles, and take over wetlands, driving out native species.  There are active eradication programs in place to try and stop the takeover!