Well, June arrived with the sudden blossoming of the peonies, and our long lost lilacs (which have never bloomed before).  I wanted to share pictures with you, but it was so windy (and it was a COLD wind!), that I couldn't get useful pictures anyway.  So you'll have to make do with some pictures of Hogg's Falls, taken a week or two ago on a photography outing - practicing those 'slow' shots of flowing water. 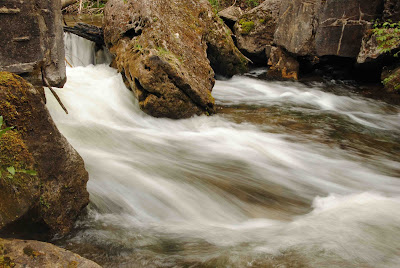 Hogg's Falls is on the Upper Valley Road, just one concession northeast of Flesherton, but it's not as well known as some other falls, even though it's easy to access.  The first shot above is upstream from the falls, where the old hydro dam used to be - you can see a bit of old cement in the upper left corner.  Water was flowing pretty high when we took these photos. 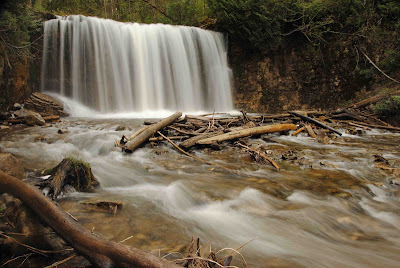 This is the falls itself, about 20 feet high, falling over the Manitoulin Formation of the escarpment.  It takes a bit of climbing down a short cliff to get below the falls to take a picture from this viewpoint. 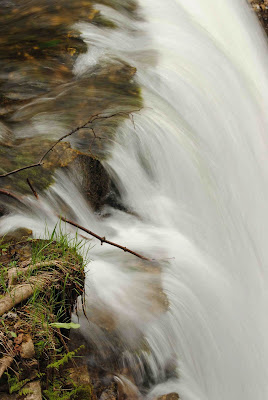 And this is the brink of the falls from above.  The trick to getting these 'slow' water pictures is to use the 'shutter' setting on the camera, and set the speed at 1/8th or less.  Of course at such a slow speed you need to have a tripod, or else be leaning against a tree and have very steady hands!

Email ThisBlogThis!Share to TwitterShare to FacebookShare to Pinterest
Labels: Waterfalls