I was delighted to read in the news the other day that Mary Simon, an Inuk from Kuujjuac on Ungava Bay in northern Quebec has been appointed our first Indigenous Governor-General.  It couldn't come at a better time given the recent announcements about grave sites found at former residential schools.  Canadians are finally waking up to the reality of Indigenous suffering resulting from Canadian government policies over the past 150 years. 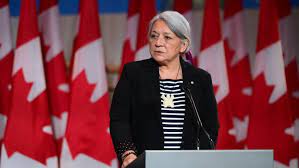 Mary Simon was the child of an Inuk mother and a white father, the manager of the local Hudson Bay Trading Post, who had fallen in love with the north.  She was brought up in a traditional lifestyle, in her words 'camping, living on the land and hunting, fishing and gathering food'.
She was born in Kangisualuujjuac, but grew up in nearby Kuujjuac, where she attended a federal day school until Grade Six.  After that she completed high school by correspondence and homeschooling by her father.  She has been an advocate for Indigenous rights for her entire career, serving as Canada's first Arctic Ambassador and our Ambassador to Denmark.
She has received numerous honours, including 6 Honourary Degrees, and is bilingual in both English and Inuktitut.  Her lack of fluency in French has disappointed many Quebecers, but it seems a lot to expect a Governor-General to be tri-lingual!  Simon served as a lead negotiator for the historic James Bay Agreement, she served as an Inuit negotiator for the repatriation of the Canadian Constitution, and she was elected President of the Inuit Tapiriit Kanatami, the national Inuit organization in 2006, serving for 6 years.
Simon's appointment has been welcomed by Indigenous leaders across Canada.  And I welcome it too! 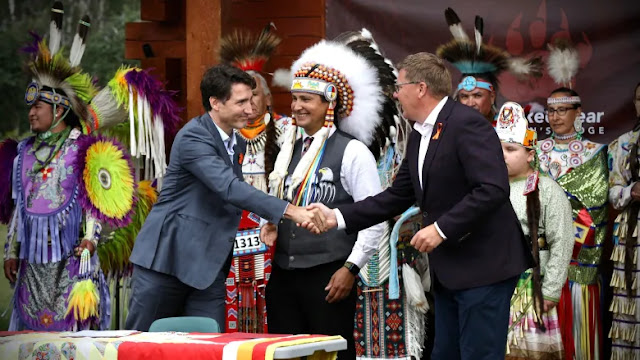 On the very same day I think it was, a historic agreement was signed by the Cowessess First Nation in Saskatchewan, the same nation that announced the finding of 751 possible graves three weeks ago.  Here the Chief, Cadmus Delorme, the Saskatchewan Premier, Scott Moe and Prime Minister Trudeau participate in the signing ceremony.
The 'Sixties Scoop' has flown under the radar of Indigenous Residential Schools, perhaps because there are no graves to discover and no sites to remember them by.  But 1951 amendments to the Indian Act allowed child welfare agencies to 'scoop' children off reserves if they felt they would do better in white adoptive families and the white education system.
True, the living conditions were not as bad and death rates have not been an issue, but the loss of culture and the resulting inter-generational trauma have been just about as serious.  Children have ended up unable to fit in either white society or their communities back home; 20,000 children were 'scooped' in about two decades.
A little-noticed piece of recent legislation has allowed Indigenous communities to take back authority for child welfare, and the Cowessess First Nation is the first to do so.  Numerous other bands are negotiating similar agreements.  As the Chief said, there will be a lot of work to make this happen, but signing the agreement is a historic step.

Note on Terms - in case you've forgotten, 'Indigenous' refers to all Indian, Metis and Inuit peoples in /Canada.  'Inuit' are those who live in the Arctic.  'Metis' are peoples of mixed Indigenous and European ancestry, most typically fur traders who married Indigenous wives.  'First Nations' are only those Indigenous bands identified under the Indian Act and exclude the Metis and Inuit.