Back Down to the Harbour

I've been back down to the harbour a couple of times recently, stopping at the side of the inner harbour and just watching what's going on.    I keep watching for different things to photograph but I'm running out of ideas.  Still, I keep managing to take more photos. 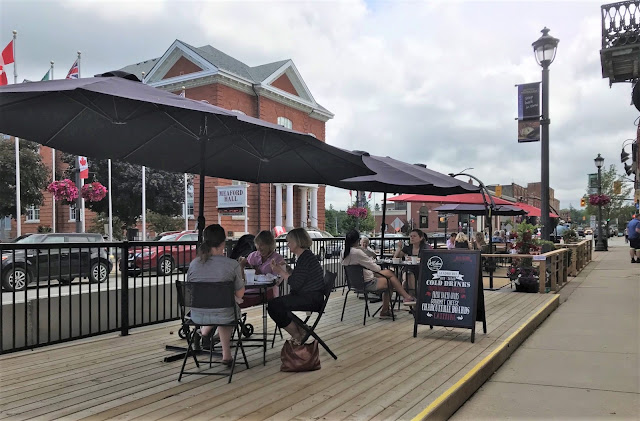 I often ride along at least one block of our two-block downtown.  These are the patios where they've blocked off traffic beside about four restaurants. 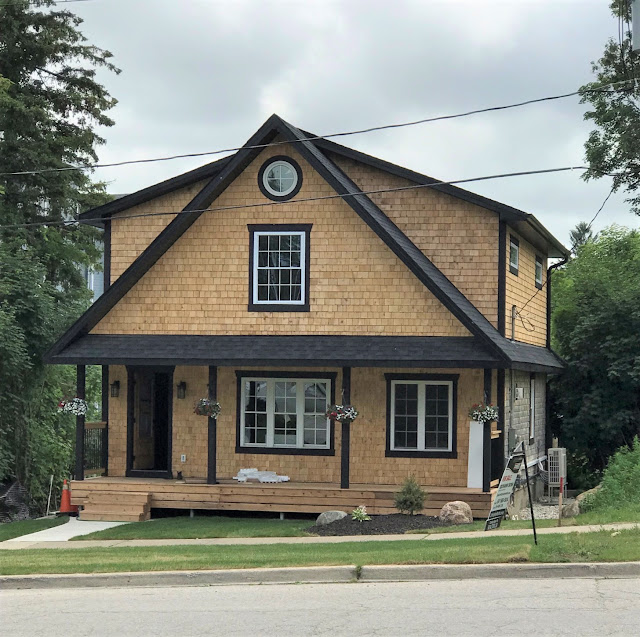 In the last block of Nelson before the water someone has fixed up this old cottage very nicely, and now it's for sale.  It was in very bad shape before and I thought it might just get torn down.  Looks good now; I hope it's actually been fixed inside too. 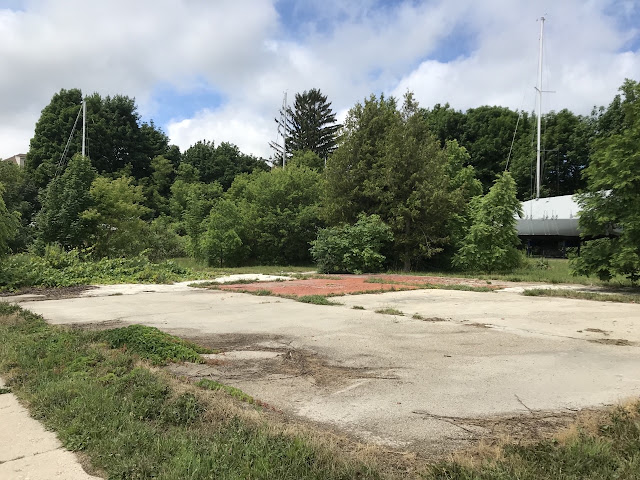 The harbour of course had a number of industries around it many years ago, including a grain elevator and the train station.  This vacant lot was one of the old shoreline factories, still vacant after many years.  You can still make out the outlines of the old buildings.  I think the town should be pushing the owner to do something with it. 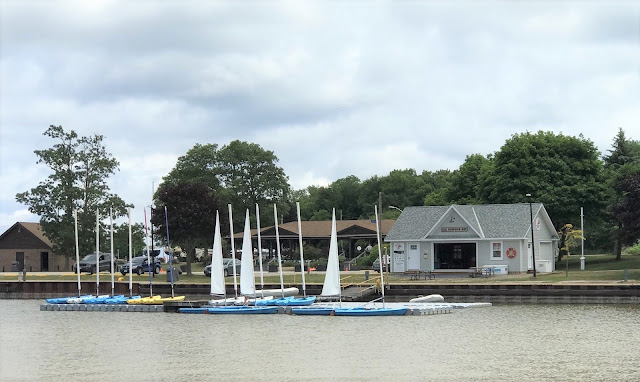 Down at the shore they were just starting to get the sails up at the sailing school.  I figured they might be getting things ready for the summer sessions. 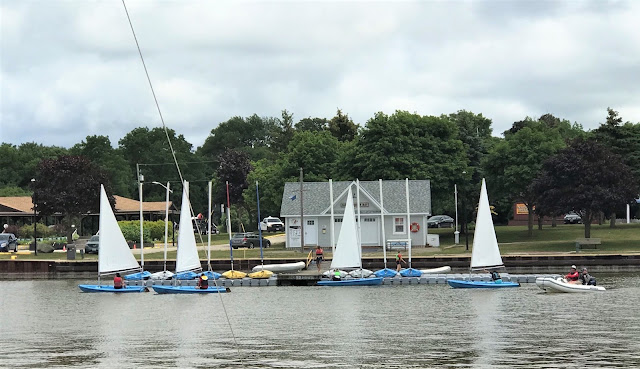 And I was right.  After a few moments they had four sails up and those four boats set off with the instructor in the rubber dinghy, out into the open waters of Georgian Bay.  The first week of learning to sail. 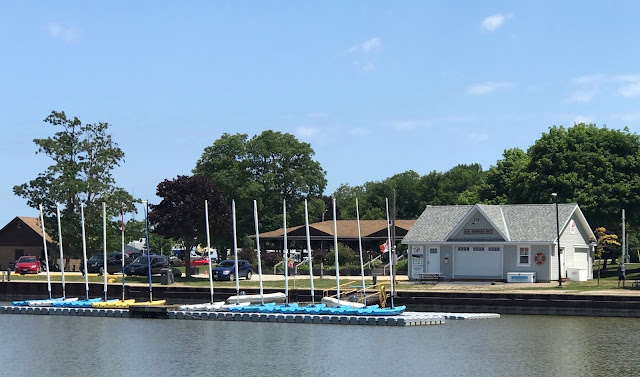 I was down again on Saturday and all the boats were out of the water sitting on the floating gray dock, waiting for Monday. 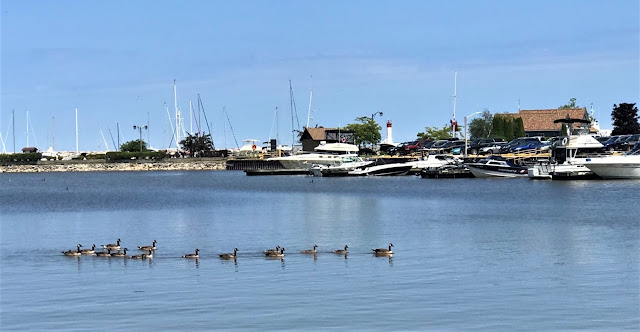 Along came a flock of Canada Geese, swimming in a very loose line across the harbour.

As I watched closely I noticed that at least the first three birds behind the lead goose were this year's goslings, almost grown up.  You can see they're a little smaller and the black and white colours are not quite as clear. 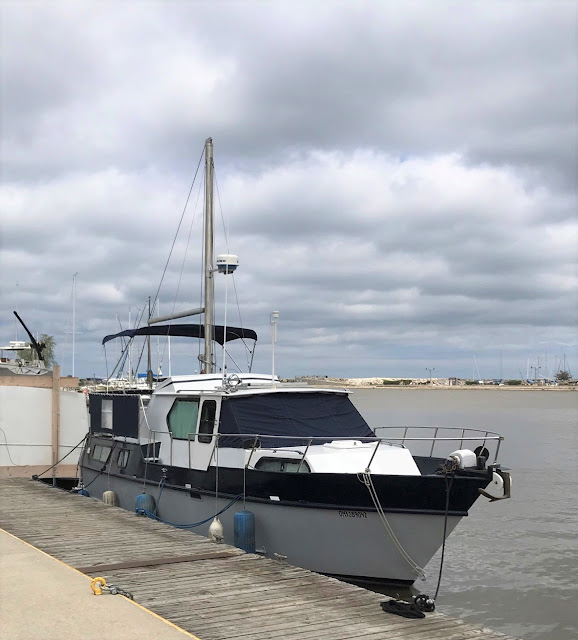 Tied up at the dock right in front of me were two new boats, this rather ominous one painted in black and white.  No name on it, so I couldn't get any more info. 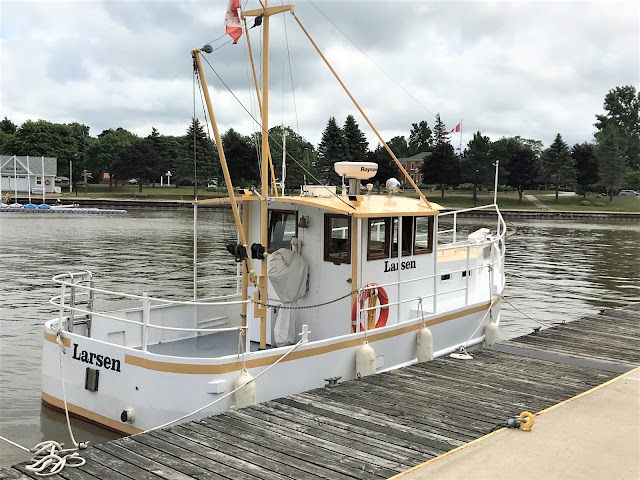 But this one is interesting, and it's for sale.  What looked like a brand new paint job, and 25 years old, you can buy it for just $75k.  It's built as a trawler for a couple, suitable for exploring the Great Lakes, and has an on-board 'head' (washroom), space for two to sleep and a tiny galley.  Unusually, it has a bow thruster too.  Any takers? 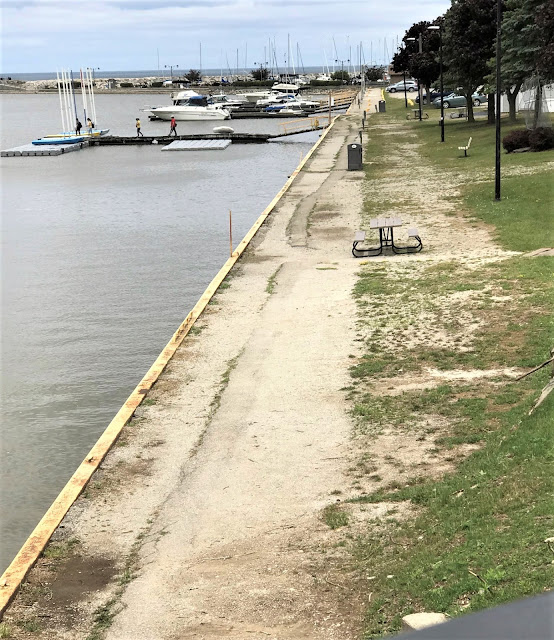 I crossed the new bridge and took a photo of the rough gravel path that makes for horrible riding on the far side where I had hoped to find a sidewalk.  I intend to send this photo to the staff member in charge of sidewalks. 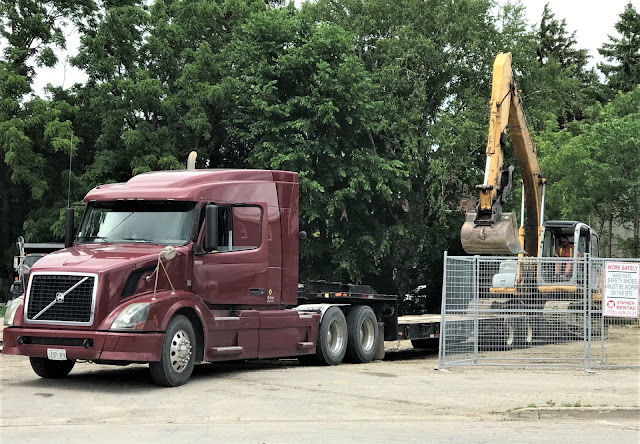 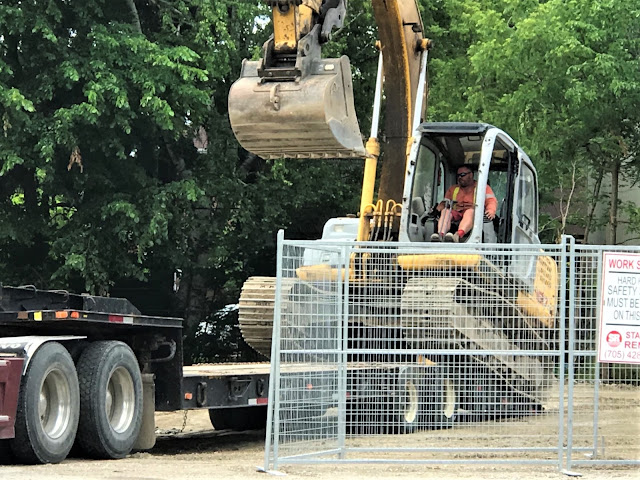 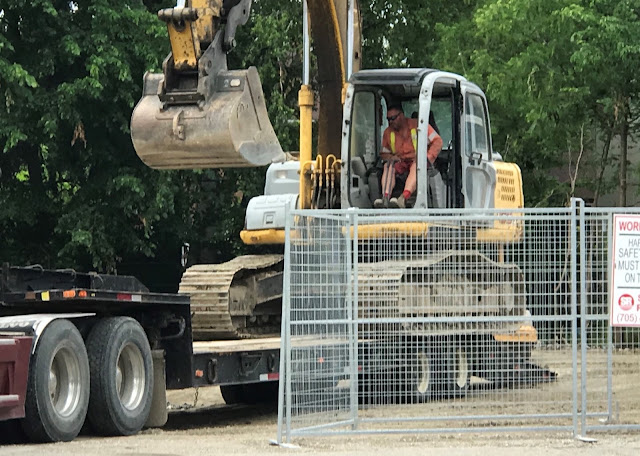 On the way home I passed by the site where they've been clearing the old garage for a new small downtown parking lot.  I was there just at the moment when this big hi-ho was ready to load.  In only a couple of minutes he had driven it up on the flatbed, turned around and lowered the bucket ready to go.  These guys sure know what they're doing!