As I said the other day, I've also found a great new route for riding that causes me less pain 'cause it's smooth pavement..  I made a conscious decision a few weeks back to try and avoid the painful bits, and went searching.  Turns out going downtown is actually quite good, though I'm forced to use the sidewalks down there, and Thompson Street is the other great ride.  You can just sail along at full speed and not even worry about it. 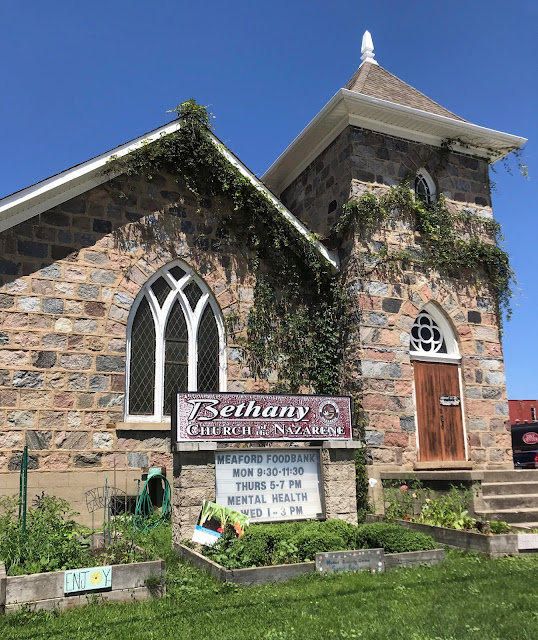 Going downtown via Thompson and Trowbridge Streets is quite interesting too.  This is a beautiful old stone church that is now used as more of a community centre, although it does still have an active congregation too.  The Food Bank is here, as well as a drop-in centre.  Notice the raised beds for veggies out front.  How many churches have that? 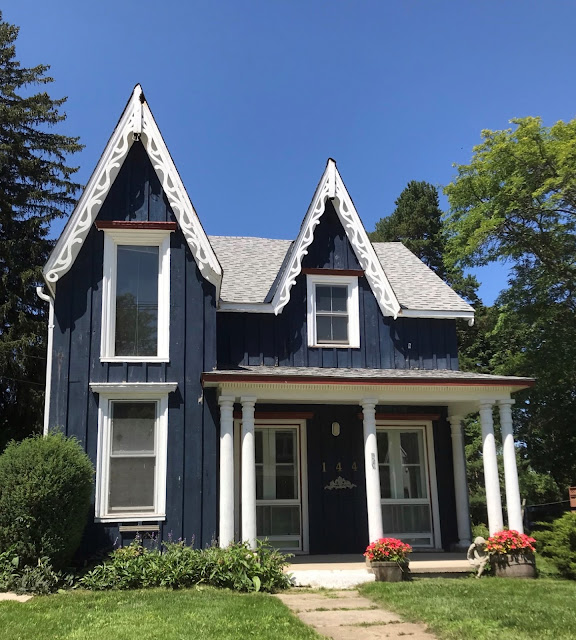 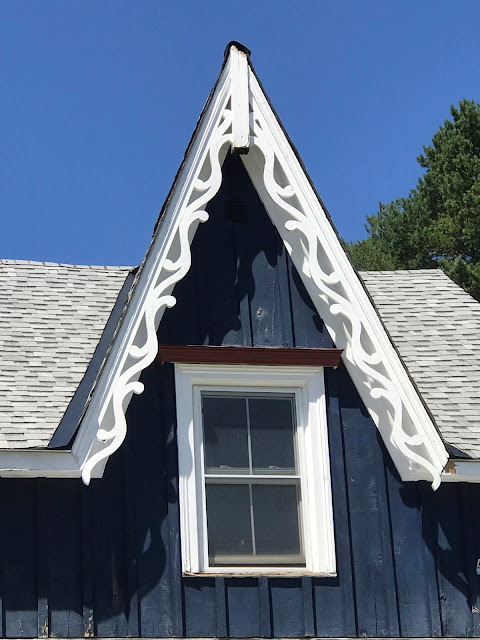 This is another old home at the other end of Trowbridge Street.  Note those high peaked gables and the beautiful gingerboard.  It's been redone in board and batten siding but is likely brick underneath. 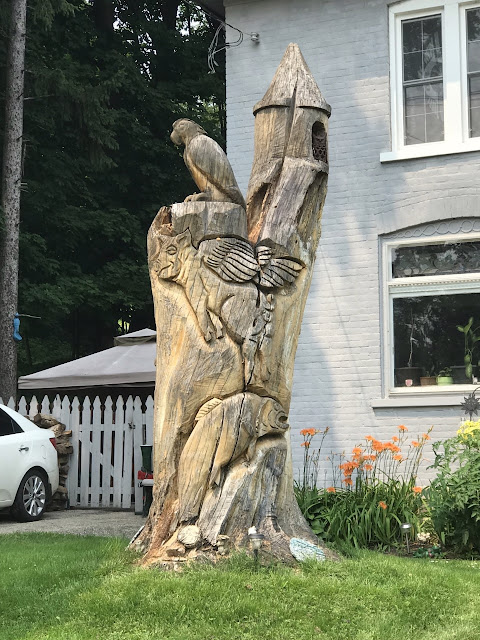 One of you noticed a corner of this intriguing carved wood stump in my photograph of the house in my earlier post, so here is the whole thing.  It's the only one like this that I know of in Meaford. 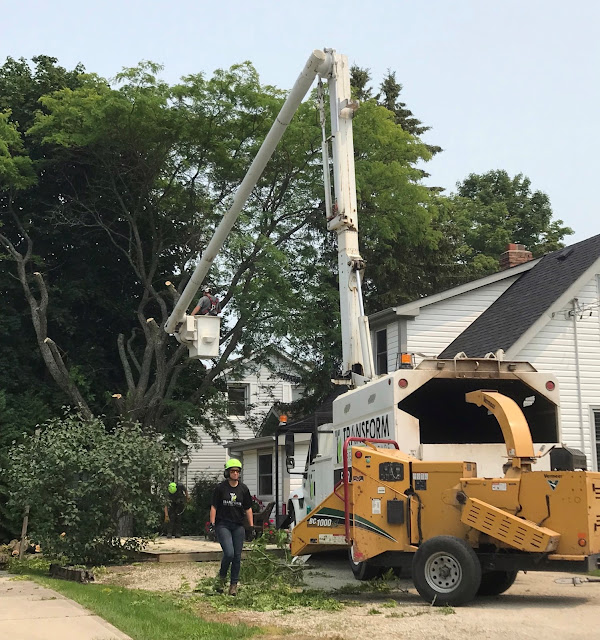 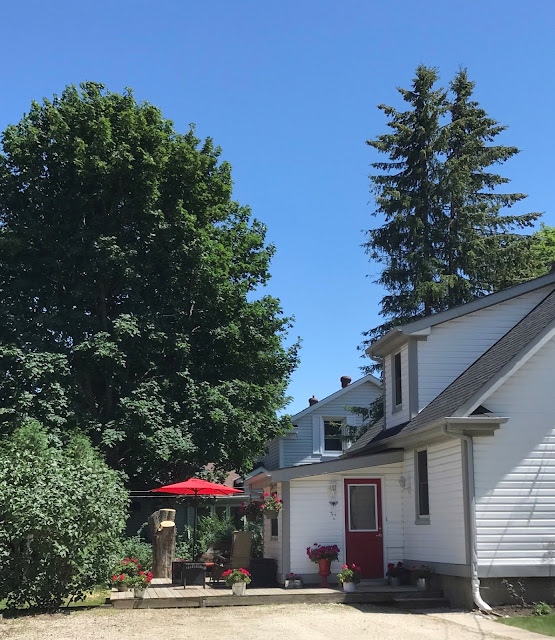 Back closer to home I heard this tree trimming crew working on Noble Street and went to check it out.  They've already removed half the big branches of the old Ash tree in the top pictures, but much of the canopy is still there.  Take a moment and compare this to the second picture a day later.  The two tall spruce trees so obvious in the 2nd picture are almost hidden behind the Ash tree in the first picture. 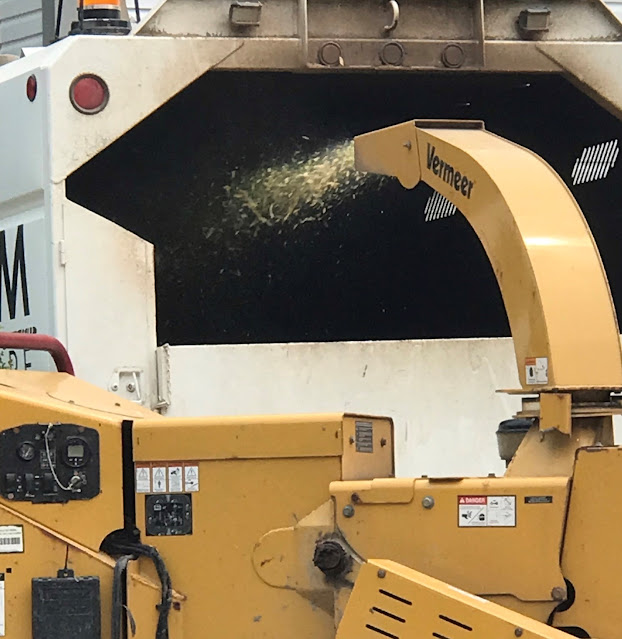 The noise of a wood chipper has got to be one of the loudest machines that I hear anywhere. 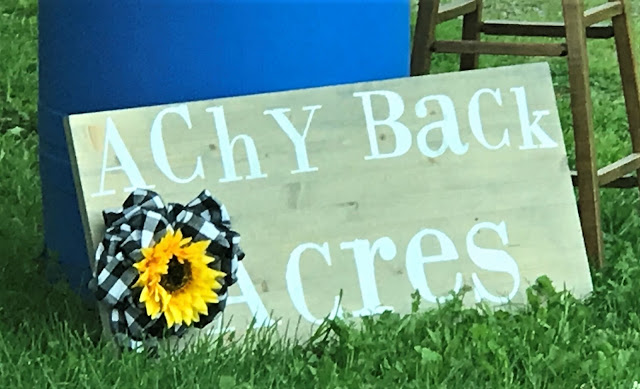 It's also the time of year for us to stop in at Achy Back Acres, our favourite little veggie farm, half-way to Owen Sound.  Last week we got a big basket of peas and some new potatoes.  We eat the peas as a snack, and the potatoes were delicious.  We'll be stopping there regularly for at least the next two months.  I highly recommend them.