We woke to mercifully cooler weather after two good days of plentiful rain.  It was semi-cloudy but no more rain forecast until later in the afternoon, so I headed out for my ride about mid-morning.  I actually put on a long-sleeved shirt over my T-shirt to keep warm enough and it was the perfect cool temperature out there. 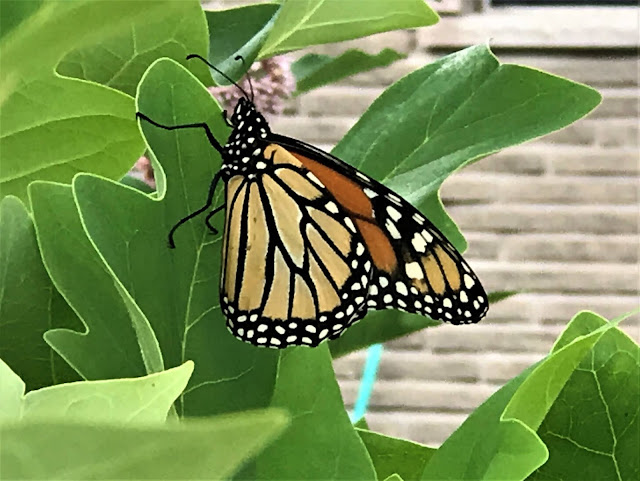 The highlight of the ride was my second Monarch of the season, and the first one to sit still long enough for a good picture.  It's actually on a Tulip leaf in between two patches of Milkweed. 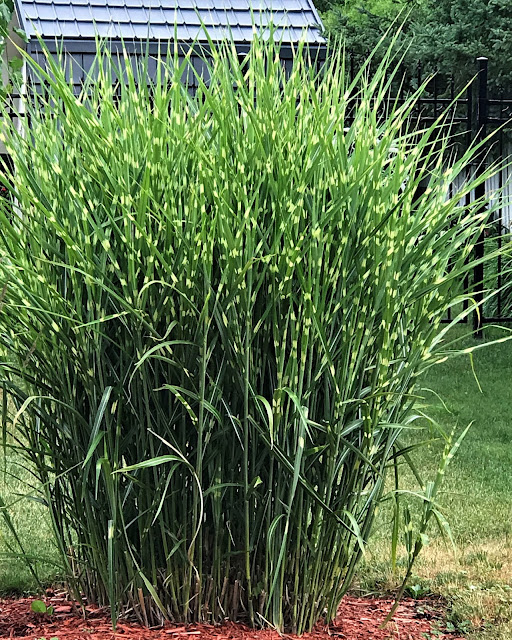 I've noticed this striking large clump of Zebra grass before; today was a good time for a picture under the cloudy skies. 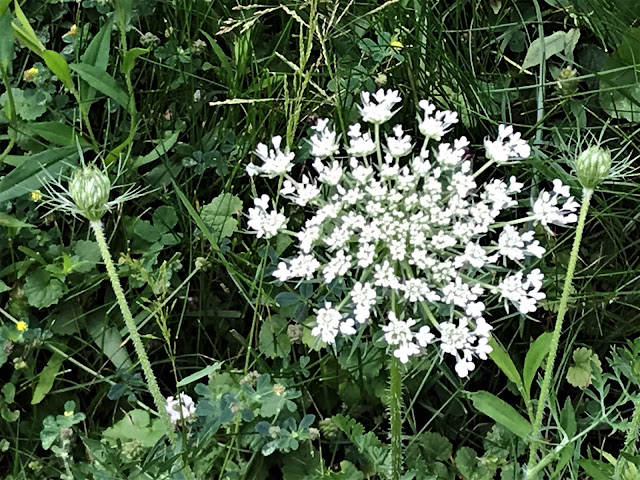 I was also pleased to see my first Queen Anne's Lace.   There are none one day and now they'll be all over the wilder patches in another day or two.  The backyard meadow was white with these at our last home. 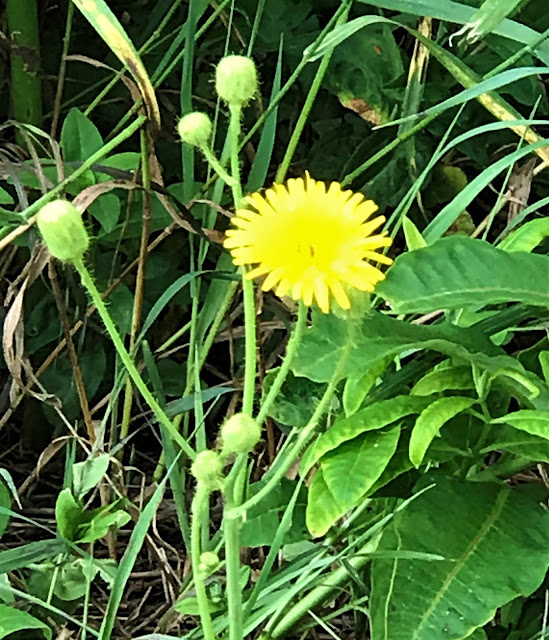 Only a couple of flowers around here are 'heliotropic', meaning they open in the morning and turn toward the sun.  By late afternoon they are finished.  And this is the first actual bloom of the yellow Goat's Beard that I've seen this year.  I'm rapidly concluding that there are advantages to going for my ride in the morning. 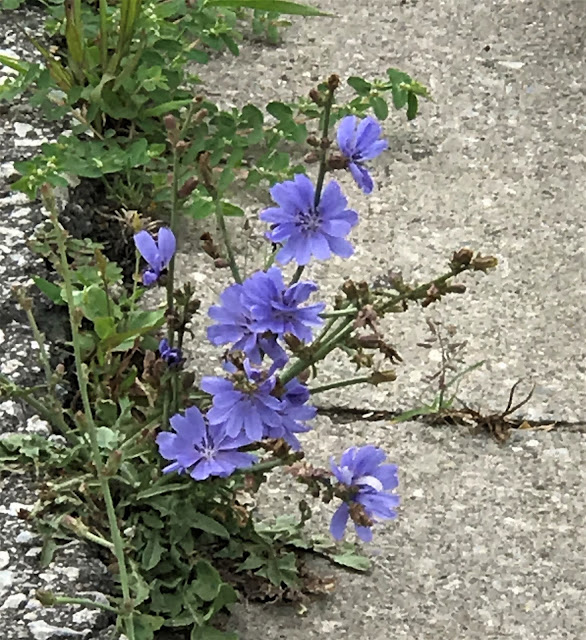 I can't believe the Chicory coming up in a crack at the edge of the pavement! 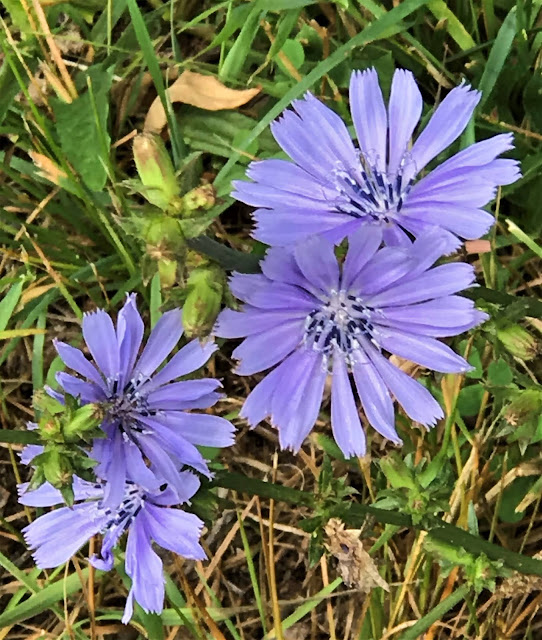 It too blooms in the morning and by afternoon is faded; these flowers are fresh and beautiful/ 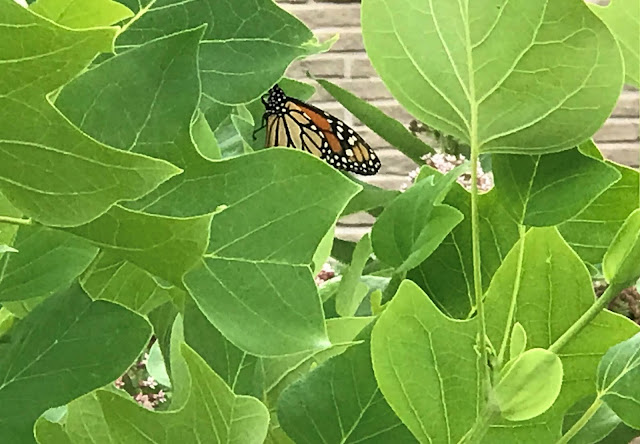 As for that Monarch, as I was approaching a patch of Milkweed that I'm stopping to check every day, it fluttered away behind the plants - but it landed on the Tulip right beside them.  My first sight was through the Tulip leaves. 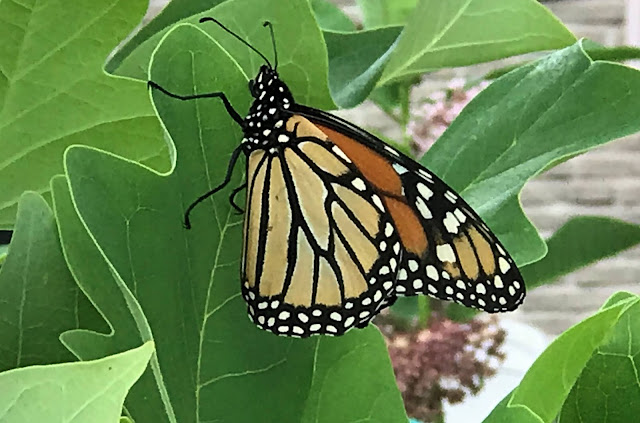 I took a few pictures and crept closer, took some more and moved again.  By the time I crept out from behind the last concealing leaf I got a great picture, and it hadn't moved!  I watched it flutter around and disappear below some lower leaves (was it laying eggs?) but it never settled down again. 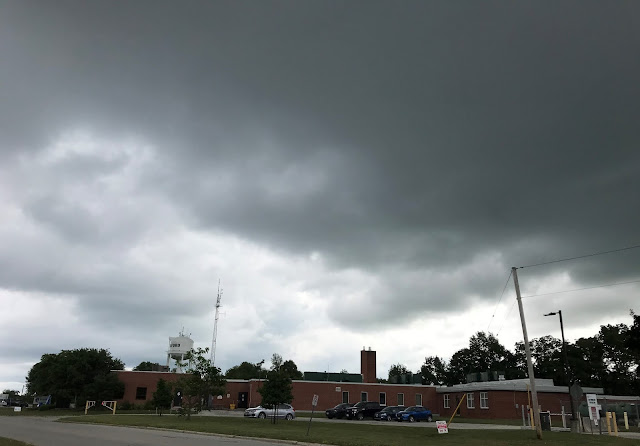 I was watching the weather all the time and these clouds over our local hospital (3 blocks away)  looked potentially ominous.  But it was moving rapidly away from me and blue sky patches were appearing.  I kept an eye on the sky as I went, but still I cut it too close.  Two minutes after I got in the door the rain started.  I don't want to be out in the rain in an electric wheelchair!