Did you know that today, Jan 21st, is Lincoln Alexander Day here in Ontario?  I'll bet you don't even know who Lincoln Alexander was, but he's certainly a citizen, politician and simply a person who deserves to be remembered.  The decision to celebrate his birthday was one of those rare occasions when all three political parties came together unanimously.

I knew Lincoln personally during the years when I served on the University of Guelph Board of Governors, and occasionally stood in as Acting Dean at convocation.  For Lincoln served as the University's Chancellor for an unprecedented 5 terms over 15 years. 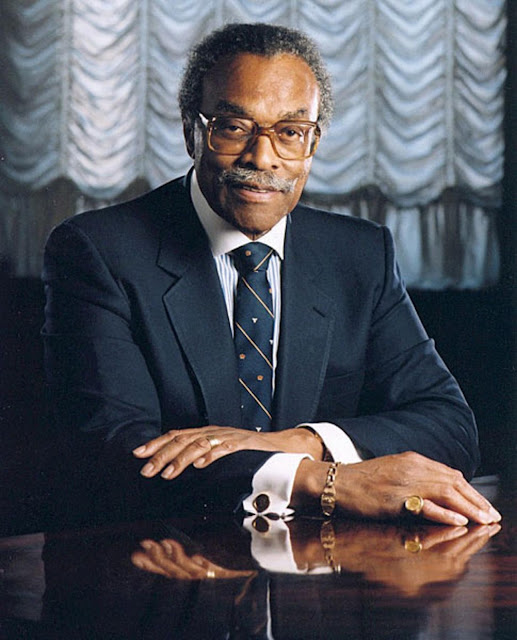 I remember his penetrating questions at Board of Governors meetings.  I remember when at convocation as he was handing out diploma after diploma, he would always say a few different personal words to each and every student - I was close enough to hear him.  I also knew him as the Chair of the Ontario Heritage Trust, just one of many boards he was on.  And I remember how he personally greeted every one he met, including me.  He had an uncanny ability to make everyone he talked to feel that you were the entire focus of his attention.

Many who got to know him just called him 'Linc'; to me he was 'Sir'.

Lincoln Alexander's parents were poor immigrants from the West Indies.  They worked hard to give him a good education.  He worked hard in return, serving in the Royal Canadian Air Force and graduating from law school in 1953.  Fifteen years later he became the first black Member of Parliament in Canada, and later the first black federal Cabinet Minister.  And in 1985 he became the Lieutenant Governor of Ontario, the first person of a visible minority to hold such a position in Canada.  He became Chancellor at the University of Guelph in 1991.

Before his death in 2012 at the age of 90 he had 7 honourary degrees.  Numerous schools and even a highway (in Hamilton) are named after him.  His public funeral attracted 1500, including several Prime Ministers and Premiers.

Lincoln faced serious racism growing up in Toronto in the 1920s, learning to stand up for himself and never running away.  He was of course the only black child in his classes, in a time when black families were rare in Ontario.  His mother was the one who pushed him to get a good education, as he recounted in his memoir, Go to School, You're a Little Black Boy.

Years later he stood up in a class of 200 at law school and told the Dean that using the term 'nigger' was inappropriate, though he'd often been called that himself.  As a leader he told the professor that he should be setting a good example.  Lincoln later said, 'That day made me a man'.  Perhaps the fact that at 6'3" he was dominating presence in a room helped.

Later in the federal Parliament he rejected his own Conservative party's line and voted with the Liberals in favour of anti-hate legislation.  Sixteen other opposition members voted with him, one saying 'I'm not going to let Linc stand alone on this.'

In the late 1940s he had difficulty getting a job as a black graduate, turned down by various companies and offices.  He ended up going into partnership with two other lawyers who had set up their own office after also failing to get job offers.  Needless to say Lincoln became a lifelong fighter against racism.  As the Toronto Sun once quoted him saying (in an article entitled 'Lincoln Alexander the Great'):

"I like to help the ordinary people.  That's my claim to fame - being ordinary.  I help the hungry, abused women, young children, those with disabilities and those who are ignored.  They are the forgotten people and I'm a people's person who hasn't forgotten where I've come from."

Alexander never lost that common touch, but also pushed people to do their best.  He would have said to Canadians that it's you duty to work hard, and give back to your community.  He is often quoted as saying, 'It is not your duty to be average'!

So pause a moment today and remember a great man on Lincoln Alexander Day.