I've been trying to pull together a description of Highway 26, the road we travel from here to Owen Sound for physio once or twice a week. We must have traveled it 100 times or more over the past 14 months.  Once I got over the initial boredom, it's really quite an interesting drive, with changes in the landscape, barns in all sorts of repair or disrepair, forests and farm fields, and rockcuts of the Niagara Escarpment.

I'm not pretending that you'll be interested in the details, but I am.  I've always had an interest in a bit of everything.  In my teaching career, I tried to help environmental science students learn to put it all together, starting with geology, through soils and vegetation, hydrology and meteorology, to present day land use and management.  So as I've driven this road I've been asking myself about the rocks we pass, the little streams, the land use.  Why are there farms in some spots and forests in others?  How is it all related?

I apologize in advance for the pictures.  Some are taken on dull days; they're just taken to document things in my own mind.  And this is very much a first draft as I seek pictures to tell the story.  Doing this will help me recognize what pictures I need to take in the future.

This satellite view shows Highway 26 running from Meaford on the right to Owen sound on the left. As you can see there are both farm fields and forests along the way. And sideroada run north and south. Several of those sideroads turn out to be short dead ends because of a large swamp. Come with me as we drive the 25 kilometres to Owen Sound.

The first stretch of road is relatively flat; this is where we find the apple orchards.  More on why they are here and not elsewhere tomorrow. 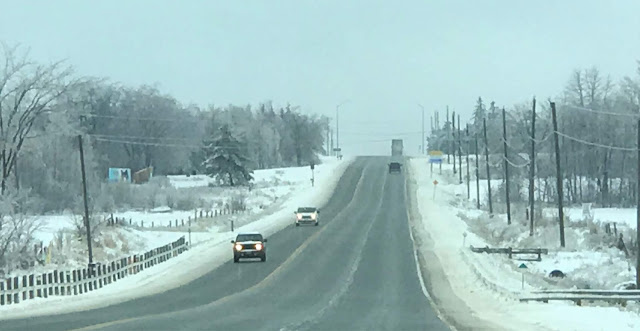 Soon we're driving up a long hill that is actually the old shoreline of post-glacial Lake Algonquin, which extended a long distance up the Bighead River valley. 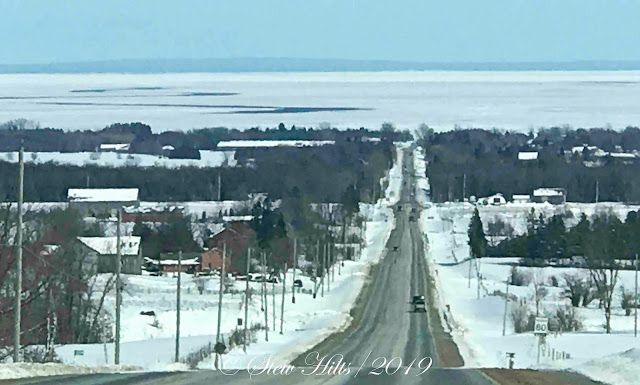 If we were to stop and turn around at the crest of that hill (at a corner appropriately named 'Bayview'), we'd get this view toward Meaford and Georgian Bay.  The bay is certainly not frozen like this this year! 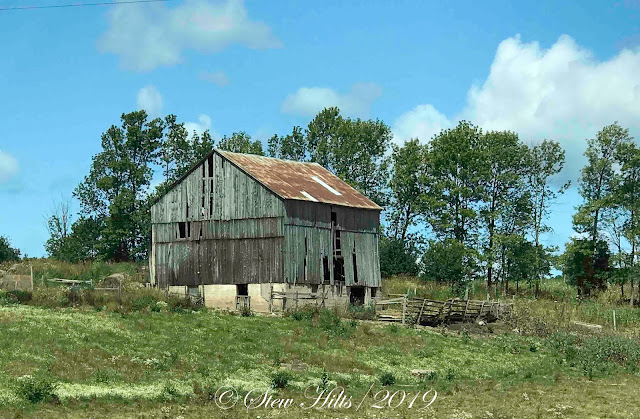 The next stretch takes you up and down over several hills that are actually glacial drumlins.  This old barn sits on the side of one of those drumlins.  Don't know if it's actually used, but it does stand on an active farm so it's probably used for storage if nothing else. 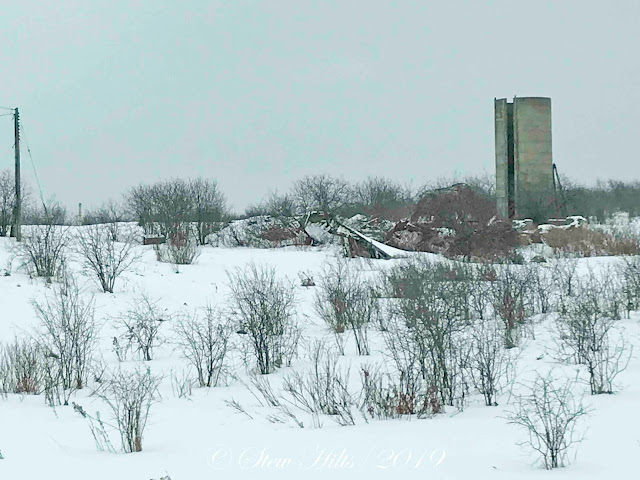 Other farms are not so active anymore, though a couple have left the evidence of an old homestead, barn foundation and silo behind. 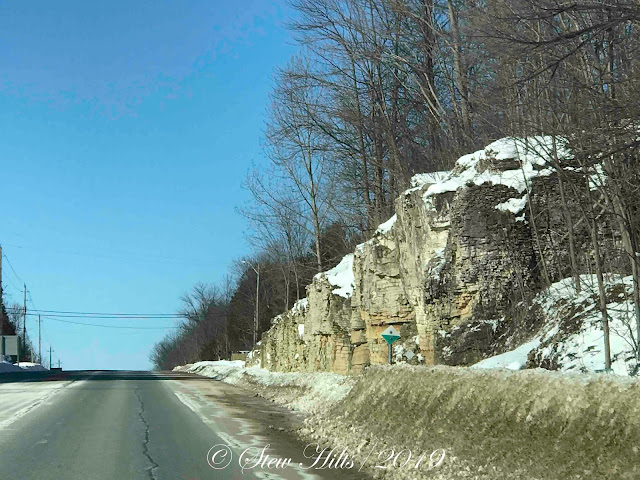 Then we enter the first rock cut at Woodford, rising up to drive on top of the escarpment for awhile.  The Bruce Trail crosses here, with interesting properties on both sides of the road. 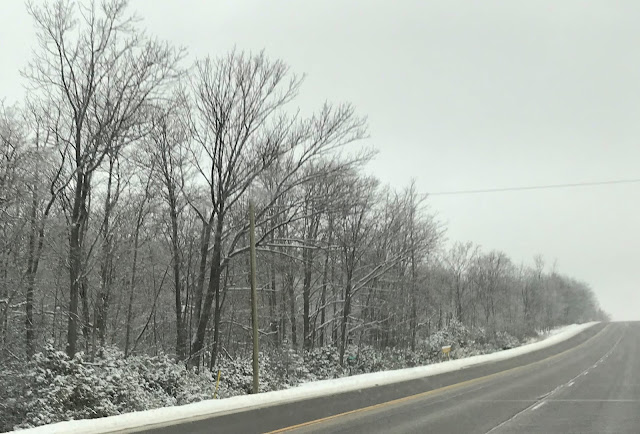 Now that we're on slightly higher land we notice that there is more likely to be a dusting of snow here, when there might not be back in Meaford.  There's a consistent microclimatic difference here. 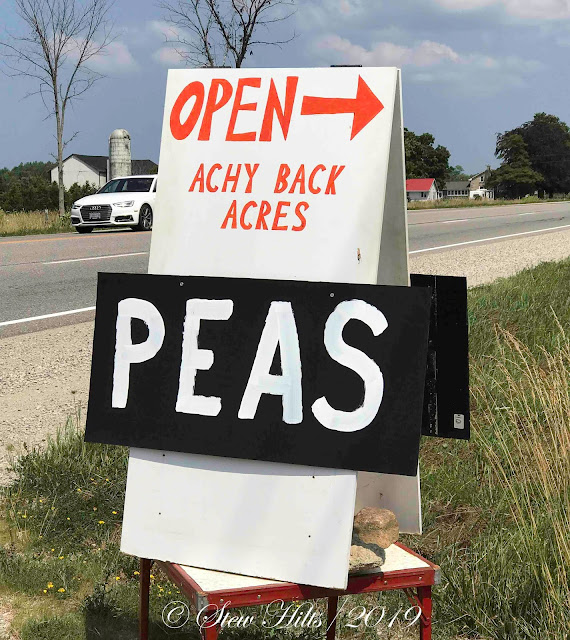 After the forested stretch we pass 3 or 4 active farms, including Achy Back Acres where we stop to buy veggies in the summer. 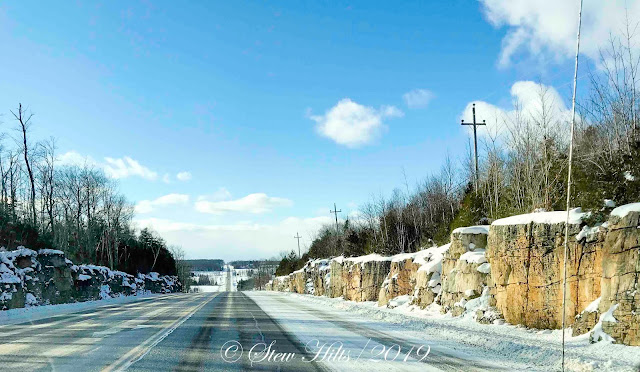 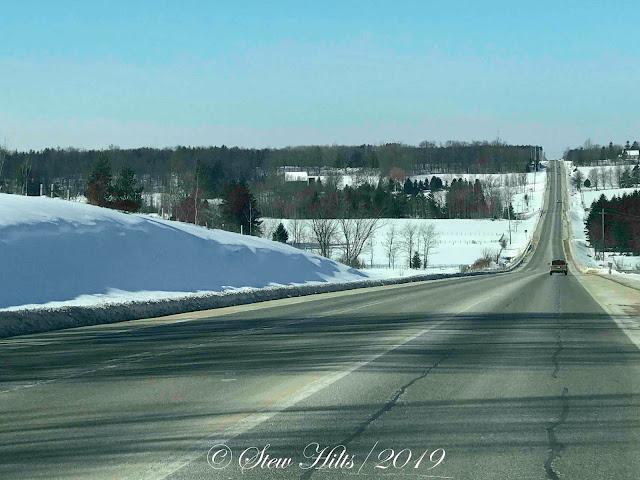 Then we're passing back through a rockcut and down into a broad valley.  It took awhile looking at maps, but I figured out that this is the valley of Keefer Creek, which has a nice waterfall downstream. 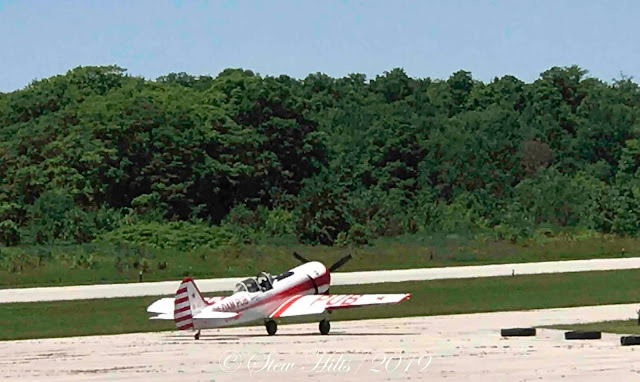 Shortly after that we're back up on a relatively flat stretch for a distance.  This is where Owen Sound's Billy Bishop Airport is located.  Bishop was a native of Owen Sound.

After that you're driving down over the escarpment once again as you approach Owen Sound in the distance.  The Bruce Trail joins the road again here and follows the road for a distance. 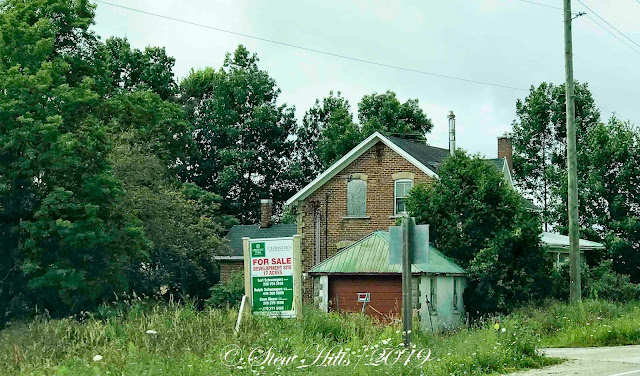 On the outskirts of the big box stores as you arrive in town there is a last farm, now boarded up and awaiting demolition.  At this point my interest in the landsape ends!  Over the next few days I hope to share with you some of the thing you see along this drive, including some of the relationships that interest me.