Getting to Know Meaford

I'm slowly starting to look around town and see what I can find about the history of Meaford, our new home.  It seems to me there aren't many significant historic buildings left, but there is certainly some interesting history. 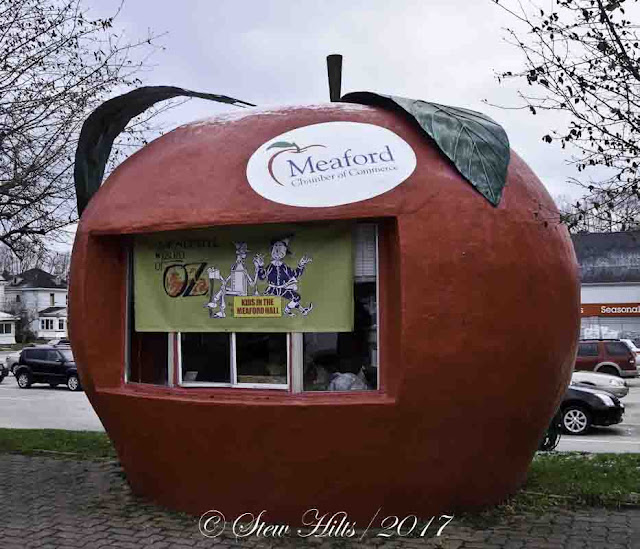 Meaford has been known as the apple growing capital of Canada, and has a 'Big Apple' downtown, a common meeting place for Bruce Trail hikes.  It's a combination of the moderating effect of Georgian Bay and the gravelly soils that make for the best apples, though there are more apple orchards around Thornbury now than near Meaford. 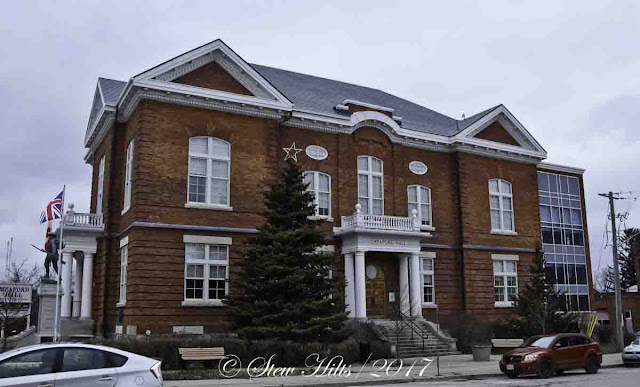 Meaford Hall is a big local success story.  Built in 1908 after the earlier Town Hall had burned down, it served as the heart of the community for nearly 100 years.  The second floor was a popular Opera House, apparently with great acoustics.  When it was left empty in 2002, the community rallied, sought a grant, and refurbished it.  Now it's a very busy location for concerts and meetings, returning to its role as heart of the community. 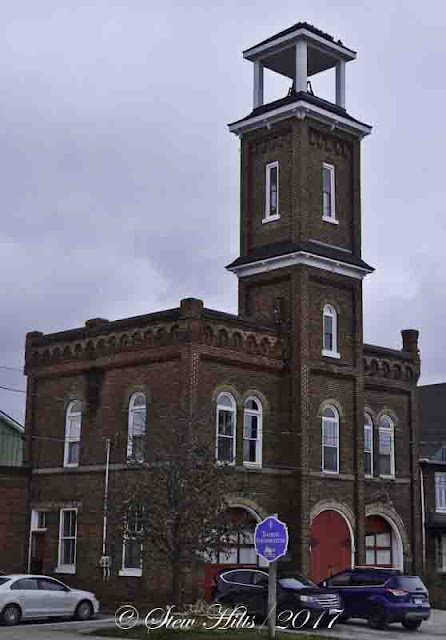 Right beside it stands the old fire station, with it's tall tower for drying hoses after a fire. 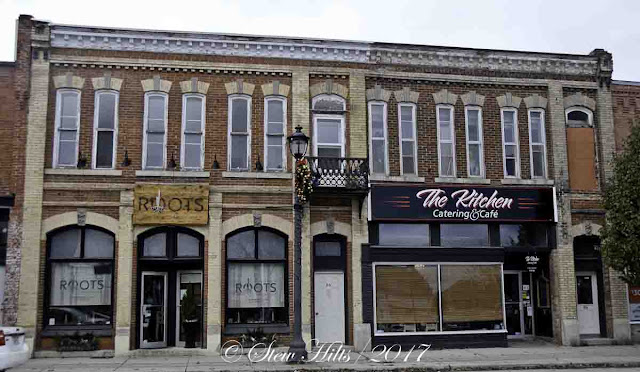 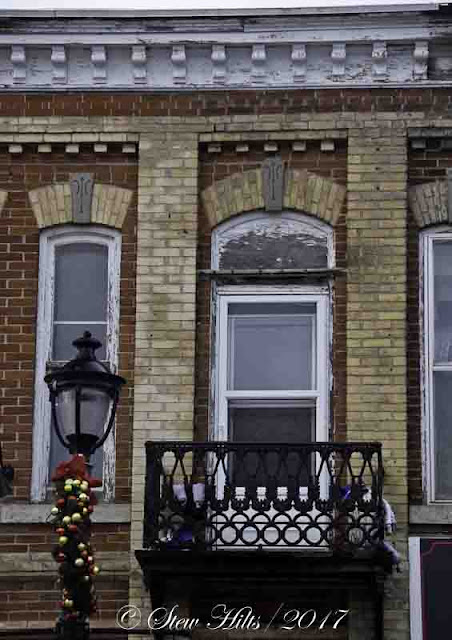 The architecture of the main street is as historic as anything in town.  This block needs a little care, but the symmetry of the original facade, the mixed brickwork, the curved lintels (and the tiny balcony) all must have made this a beautiful building when it was constructed.  The Kitchen by the way, is my favourite coffee shop. 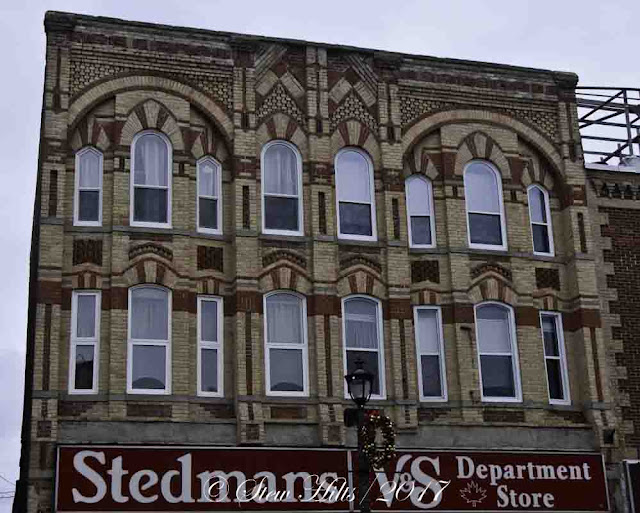 And look at the brickwork on the local Stedmans Store further down the street.  This was clearly a local businessman showing off his wealth, with imported yellow brick and an obviously talented Brick layer! 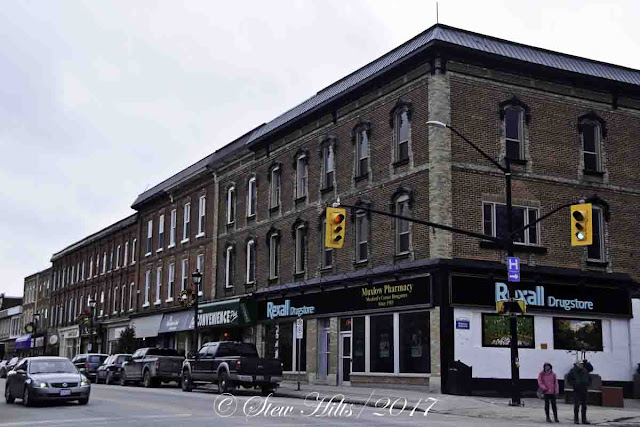 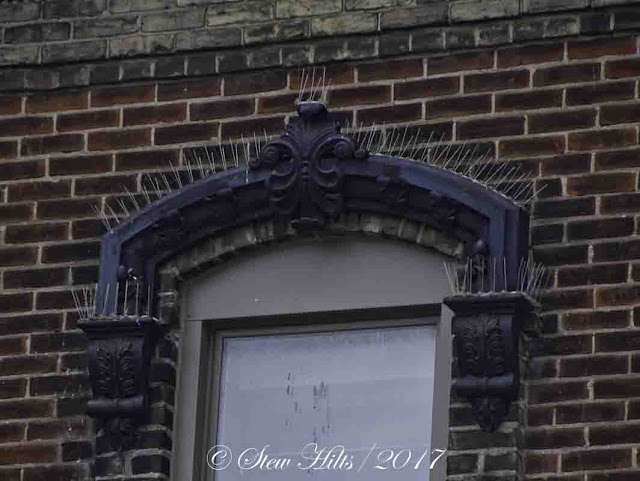 This large downtown block of three buildings illustrates the optimism of the 1880's, 90's, and just after 1900, when the railway had been built and small towns in rural Ontario boomed with growth.  What did they ever intend those 2nd and 3rd stories for?  I've seen the odd century-old multi-story store in southern Ontario, but most of these have never served as more than storage and now small apartments.  And in the long run the railways served to drain off the wealth to Toronto rather than the other way around. 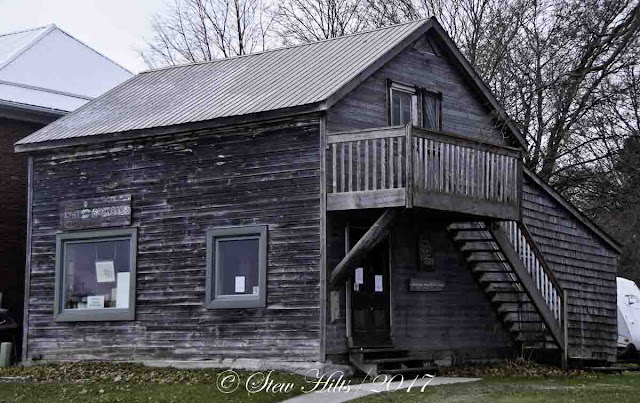 This is one other old building I know of, the Net Shed.  It serves as a used bookstore in the summer months, run by the Friends of Meaford Library.  Books are all donated (we donated several boxes last summer), and purchases are also by donation.  And it is an actual old net shed down by the harbour. 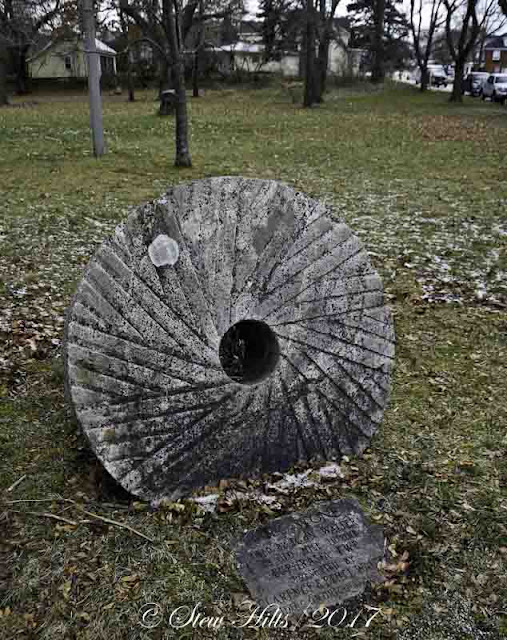 And I did find this old millstone in a local park, but reading the inscription I realized it was donated to the town and came from a mill some distance away.  I think I have a lot to learn still about local history here, but I've started making the connections.  Over the next few weeks I hope to include posts about a number of local stories, like the Army Base, John Muir's time here, Beautiful Joe (a famous local dog), and of course the harbour, a big part of the town, though it has lost almost all its former industry.  Gradually I'll fill you in on things around here.