On one of the days when our grandchildren were in school and daycare, Mrs. F.G. and I headed out to visit Fort Langley, a National Historic Site down the Fraser River.  I ended up being really impressed, and learned a lot about the early settlement history of B.C.  Warning, this is a picture heavy post; if you're not interested in a bit of history, come back tomorrow. 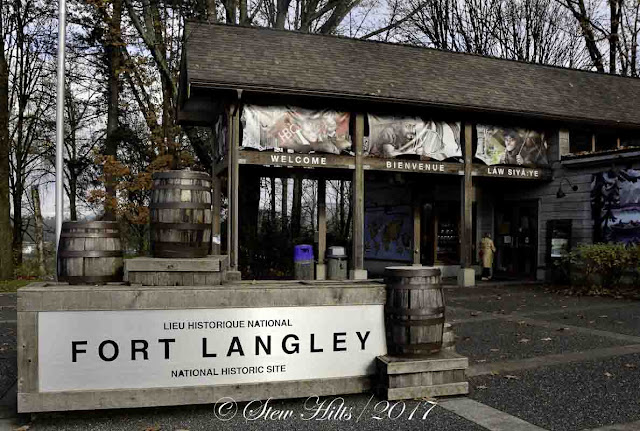 There's a small visitor centre through which you enter.  It consists mainly of a gift shop and washrooms  Notice the 'Welcome' in three languages - the third language is Halkomelem, the language spoken by the local Kwantlen First Nation. 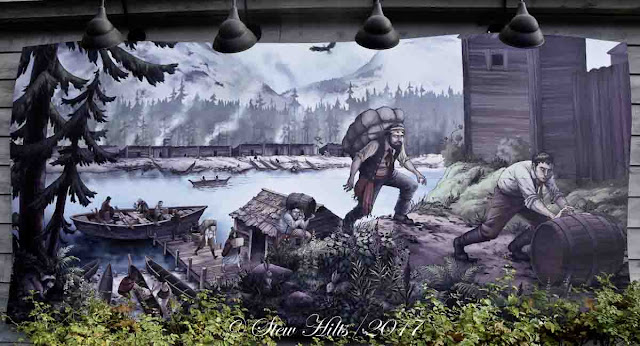 This mural was on the outside of the building, and I thought it actually captured rather well the atmosphere of fur traders arriving on a supply boat, and the native encampment across the river.  West coast tribes built houses of planks split from large cedar logs just as in this illustration. 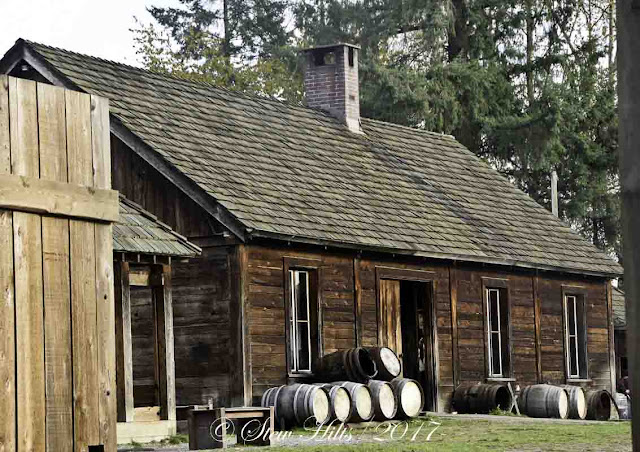 The first building we stopped at was the cooperage.  This fort developed a large farm on the flatlands of the Fraser Valley, and barrels were used for exporting salmon, cranberries and other products - as far away as Hawaii and Alaska.  It was the local Kwantlen people that pushed the fort into taking not only furs, but salmon and cranberries in trade, so Fort Langley became more than a fur trade fort from the beginning. 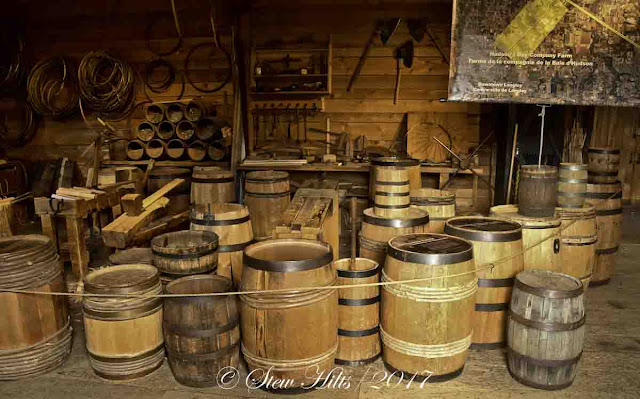 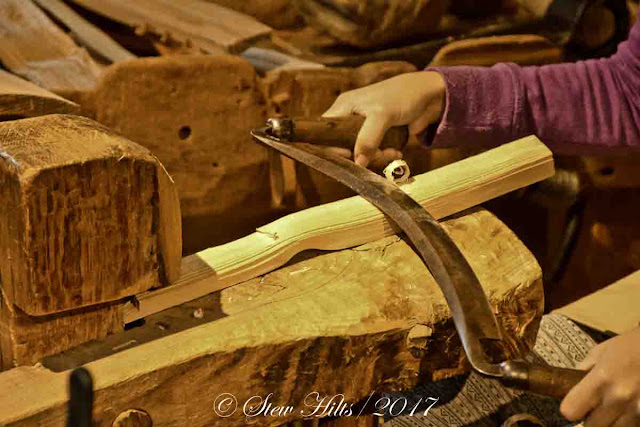 They certainly had a good display of barrels, and later we saw a young student (one of many school groups visiting that day), trying her hand at cutting a barrel stave with a draw knife. 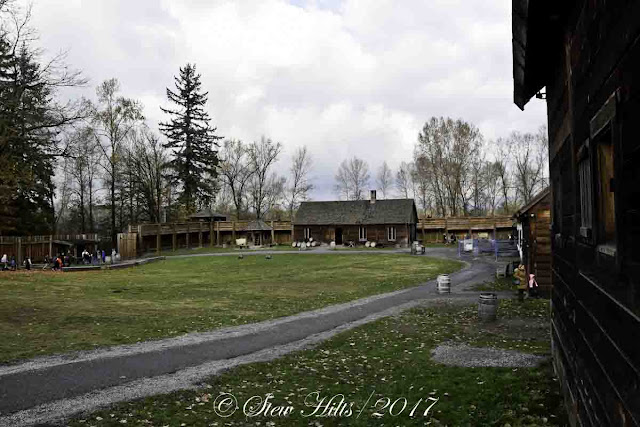 This fort was originally built in 1827, so what you're seeing today are reproduction buildings, about 10 of them, along with the surrounding stockade.  But they are really well done in my opinion. 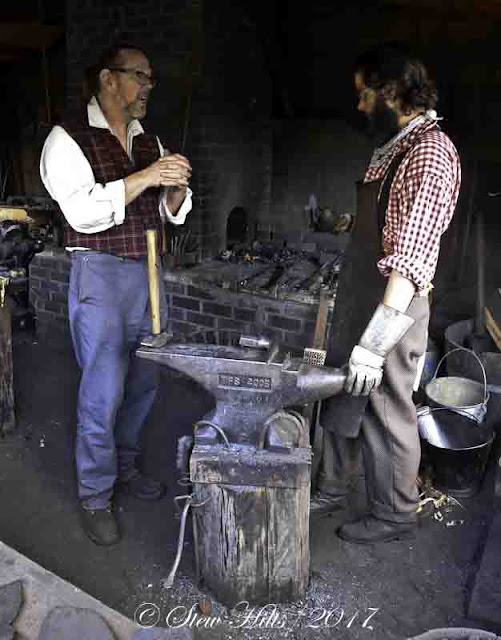 There are live demonstrations with appropriate period dress.  We listened for awhile to these blacksmiths explain what sort of tools would be made here and how. 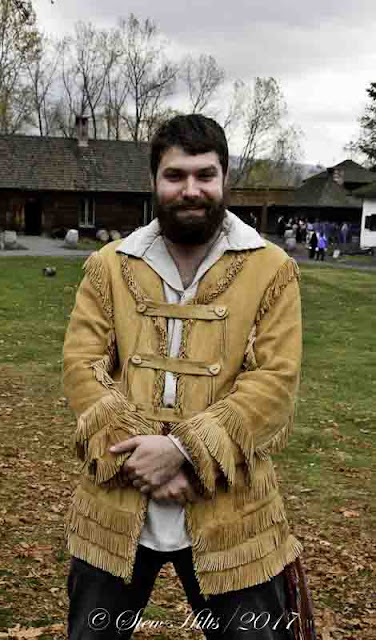 Our conversation with this fur trader turned more to his (real) life back home in Ontario. 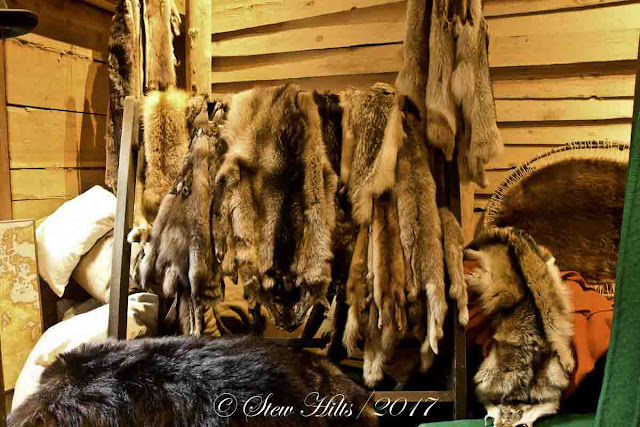 I learned the most about the fur trade.  Pelts of all kinds came into the fort, in exchange for trade goods brought from England by the Hudson's Bay Company. 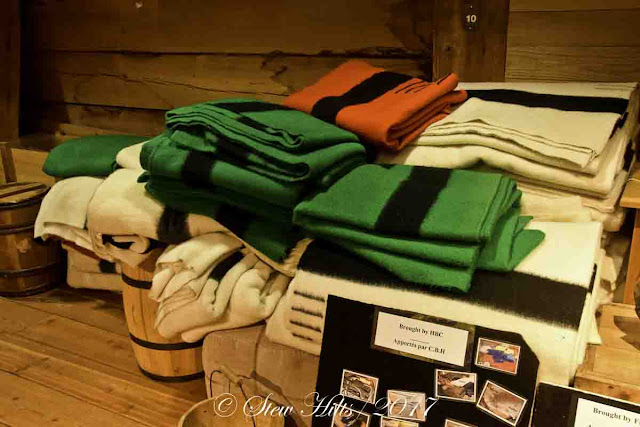 The famous Hudson's Bay blankets were popular.  You can still buy them today. 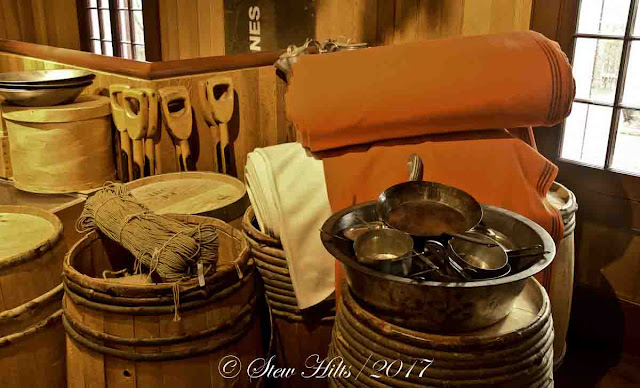 Mrs. F.G. had a close look at this bolt of cloth, and regretted she didn't have a pair of scissors to surreptitiously cut off a yard or so! 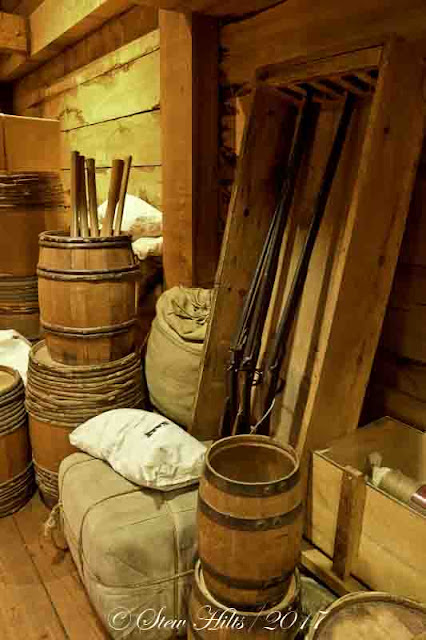 A surprising range of goods were traded, from guns to grain, from axe handles to fancy dishes. 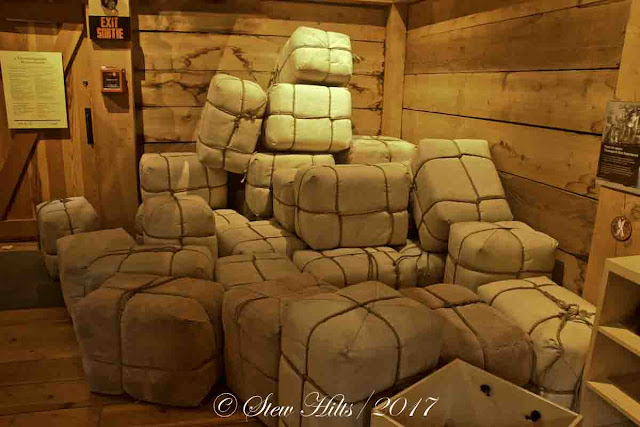 In return the furs were baled up tight and shipped back across the continent and on to England, 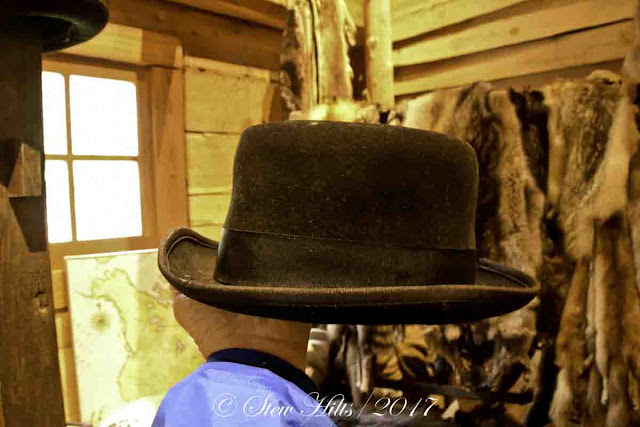 where a lot of them were made into the famous beaver hats, made out of felted beaver furs. 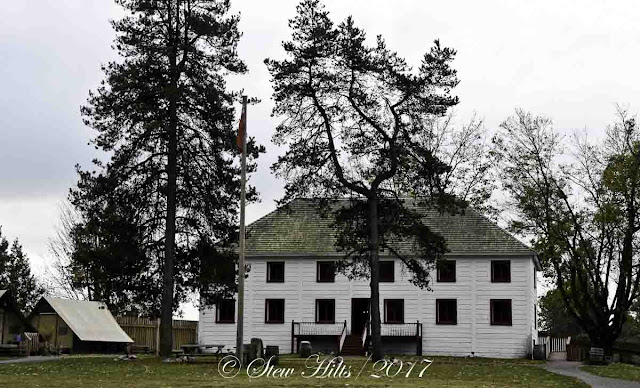 There was of course a 'big house' where the Chief Trader lived, in a fair degree of luxury I might say, for such an isolated outpost of Britain.  The United States and the British governments were arguing during the mid-1800's as to where the eventual boundary should go in the area known as the 'Oregon Country'. 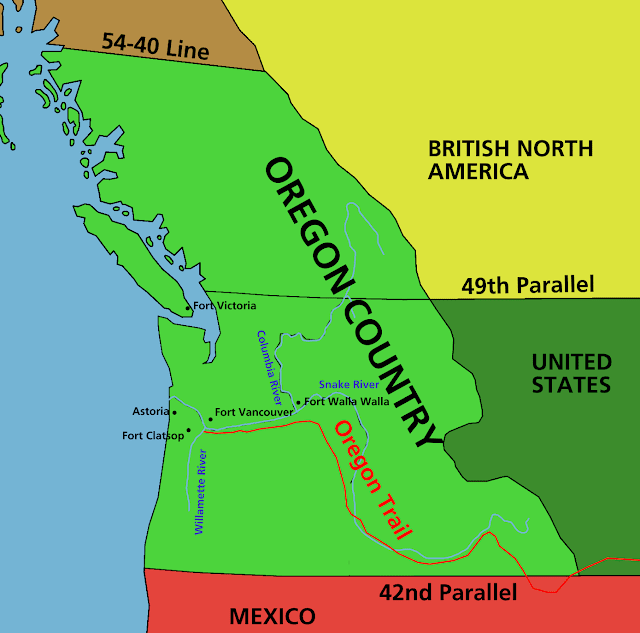 At this time the Oregon Country included much of present-day Oregon, Washington and southern British Columbia.  The British argued that the 42nd parallel should be the border; the U.S. that "54-40" should be the border.  After Lewis and Clark reached the Pacific at the mouth of the Columbia, and Simon Fraser reached the mouth of the Fraser, the final compromise was the 49th parallel.  During the years following this decision, gold was discovered in the Fraser Valley.  Thirty thousand men descended on Fort Langley!  In response, Governor James Douglas declared the establishment of the Colony of British Columbia at Fort Langley.  So this in a very real way was where British Columbia started. 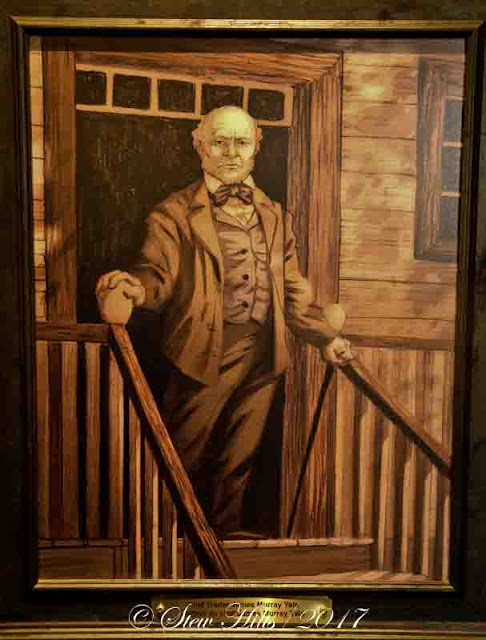 One of the Chief Traders, James Murray Yale.  Yale is a town up the Fraser River today.  I learned a good deal about the fur trade out here, and early B.C. history visiting this fort.  This post of course leaves out the entire 10,000+ years of native history that preceded it, but that is another fascinating story, or perhaps several. 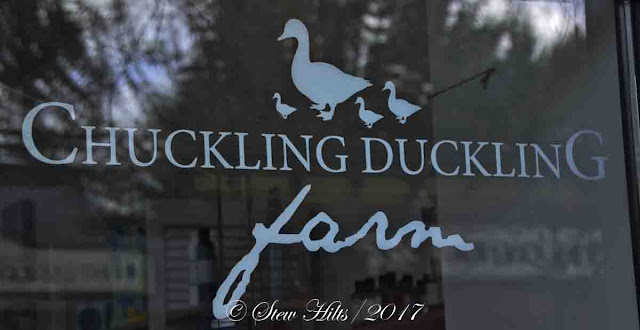 The village of Fort Langley is also interesting, though rather a yuppy sort of place.  A bead store, clothing boutiques, restaurants, antiques, but not much that would actually be useful if you lived there - like a hardware or grocery store!  Never-the-less we had a pleasant wander around, and chuckled at the name of this store!