It's hard to believe that the corn harvest is still going on as we approach December, but there are still a few fields left to bring in.  It's perhaps the most extended harvest of all our crops, because corn is harvested in two different ways here.  And it's certainly the last piece of my growing-season-long crops updates. 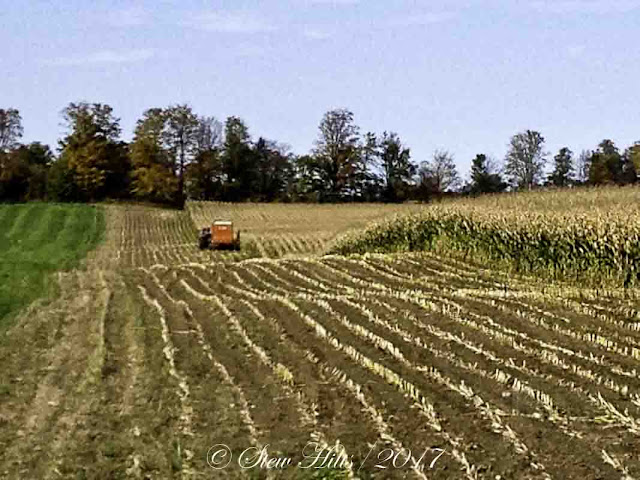 On cattle farms, where corn is grown for feed, the crop is often harvested as silage.  As you can see, not much plant material is left in the field after harvest, the entire plant is used. 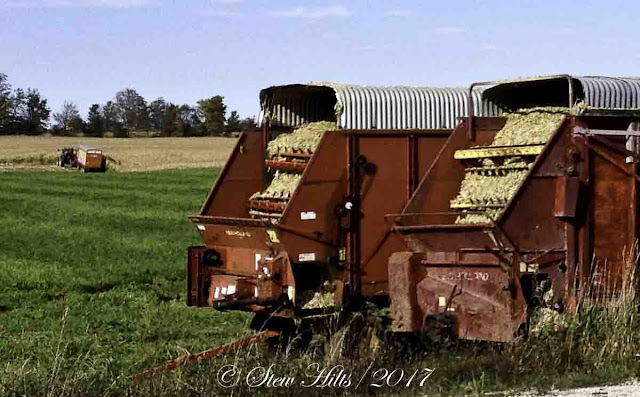 In this case the corn is harvested by a corn harvester, and the entire plant is chopped up, blown out of the back of the corn harvester into these wagons.  The cows get to eat the greenery as well as the grain, all mixed together.  I saw quite a lot of this, as far back as early October. 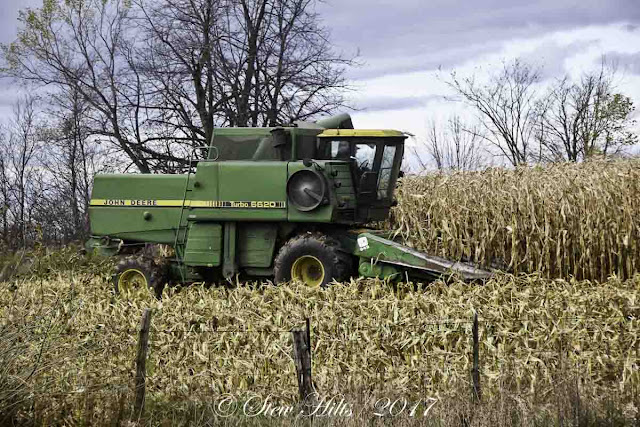 The grain corn stands in the field a little longer, well into November, hopefully drying out.  Then it is harvested by a combine, which picks only the ears of corn off the plants, and separates the grain (the corn kernels), usually as a cash crop.  Lots of plant residue is left in the field. 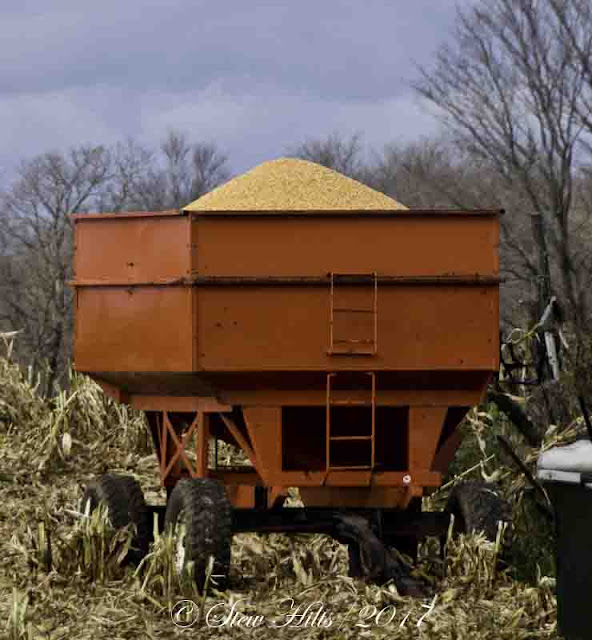 So we've seen lots of these grain wagons out on the edge of fields, which combines drop their load of grain into.  The 'combine' is named because it 'combines' the old operations of reaping, threshing and winnowing the grain - or cutting it, and separating the grain from the plant, all in one operation - an enormous labour-saving invention! 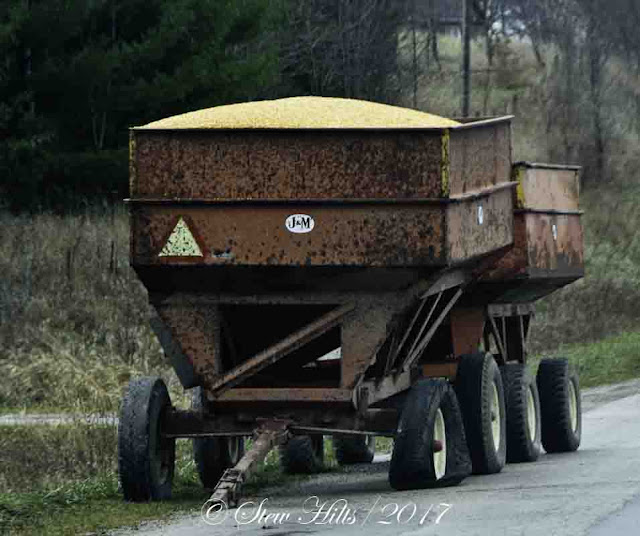 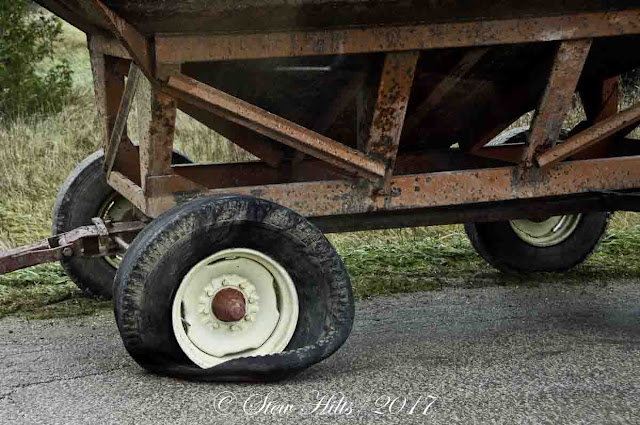 I don't think this farmer was very happy leaving this old grain wagon at the side of the road after what was probably a long working day!  We've seen lots of big grain trucks on the roads as well.  They visit farms to pick up the grain, and take it to an elevator somewhere nearby for storage (and sometimes for further drying) before it is shipped.  A lot of grain is shipped out of Great Lakes ports. 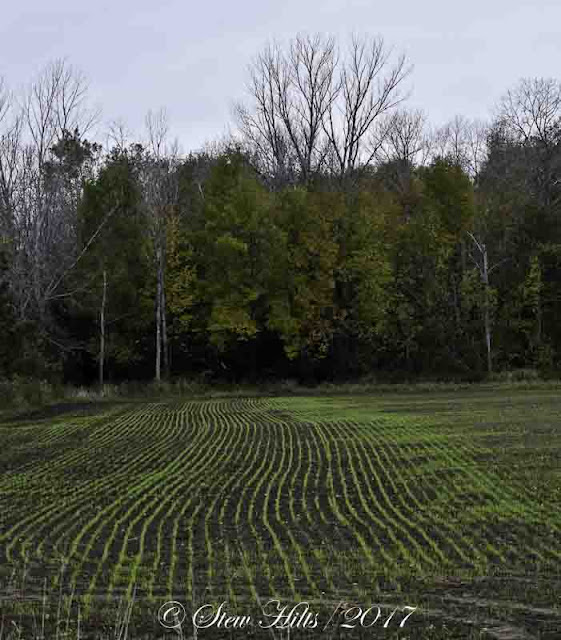 So that brings us to the end of the year's crop cycle.  I've really learned a lot about farming around here by following individual fields over the season, and talking to a few farmers along the way.  If you look carefully, you realize that the next cycle has already started, with winter wheat showing its bright green shoots, planted in mid-fall.  It will sit under the snow and be ready to take off fast in the spring.  So it's not just an 6 month growing season, it's a 12 month cycle. 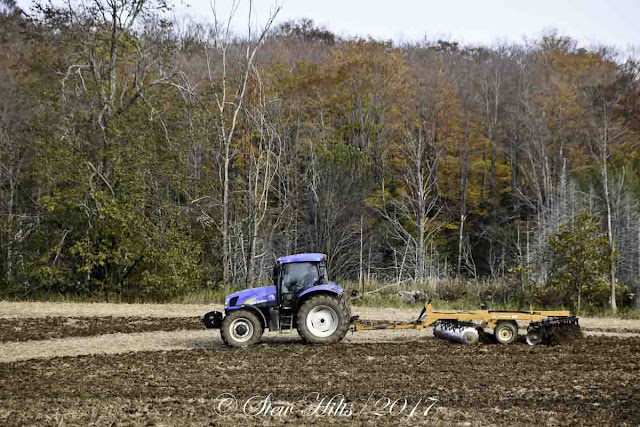 And a number of fields have already been ploughed in preparation for next spring's plantings.  This depends on what place in the sequence of a crop rotation an individual farmer is at on different fields.  Most fields won't get ploughed every year.

Hope you've enjoyed following along on my 6 crop posts over the season, and perhaps learned a little along with me.