Last month a Bruce Trail volunteer party cleared a new side trail at the Wodehouse Karst.. And two weeks ago, we had the wonderful assistance of 3 talented and energetic summer students to help us with two trail rehabilitation projects.  Us retired folks can handle lopping off branches and twigs to clear a trail, but did the energy of three 20-something year olds ever make a difference compared to all of us 65+ years olds when it came to handling a shovel!! 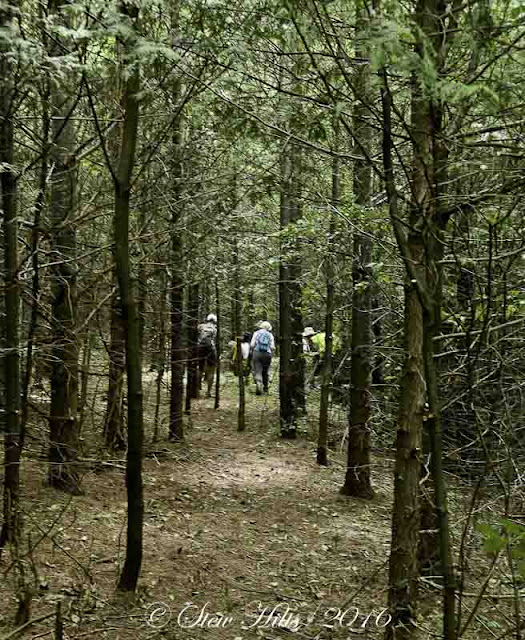 This is the volunteer work party working on trail clearing; the part in the foreground has already beed cleared out. 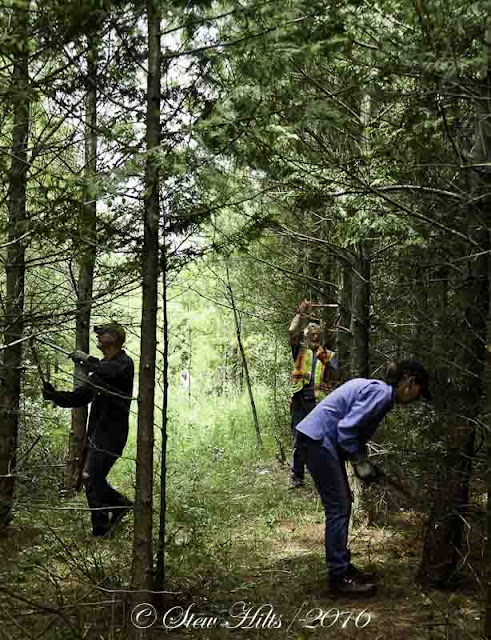 The clean-up crew came along behind, removing any more little twigs and branches that could catch unwary hikers. 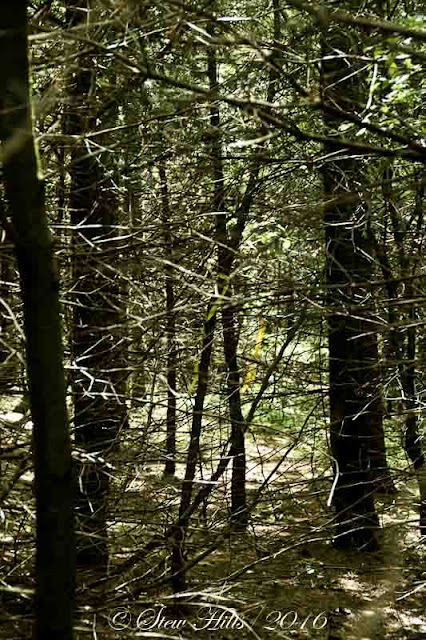 This is the 'before' picture.  Can you spot the two bits of yellow flagging tape in the centre?  I marked the route with them well in advance, and we got it approved by staff from the Conservation Authority before starting.  We`re actually building this trail at their request. 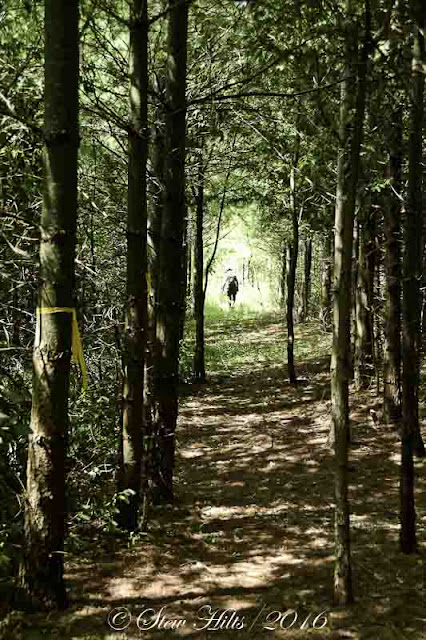 And this is an `after` view, a nice easy walk through what was a scratchy pine plantation.  Next step, paint the blue blazes that will make this as an official Side Trail.  It will connect the sinkholes at Wodehouse Karst with the springs down over the edge of the escarpment for the first time. 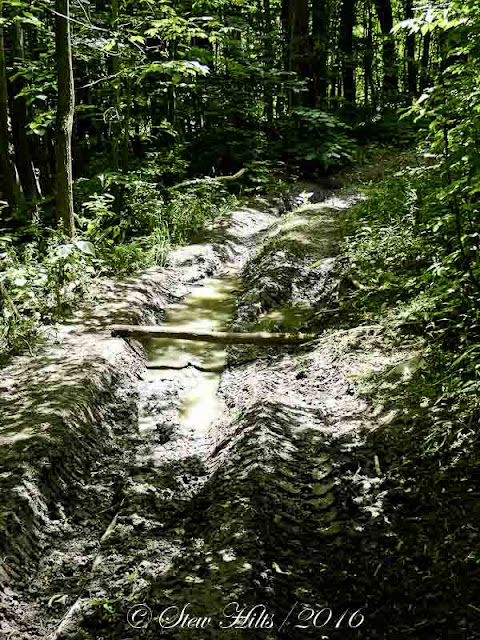 The trails in Kimberley Forest were another question.  They`ve existed for years, but parts where there are any springs have been heavily damaged by ATVs, causing deep water-filled ruts. 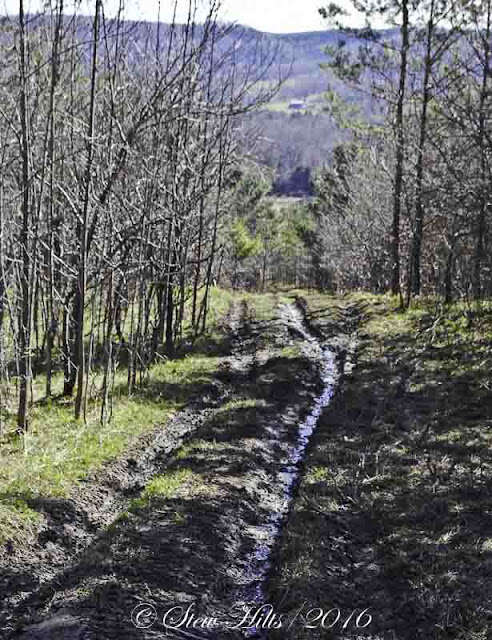 And in places where the trails go straight down the slope, on the clay soil, shallow ruts quickly erode into a serious problem as water flows down the ruts. 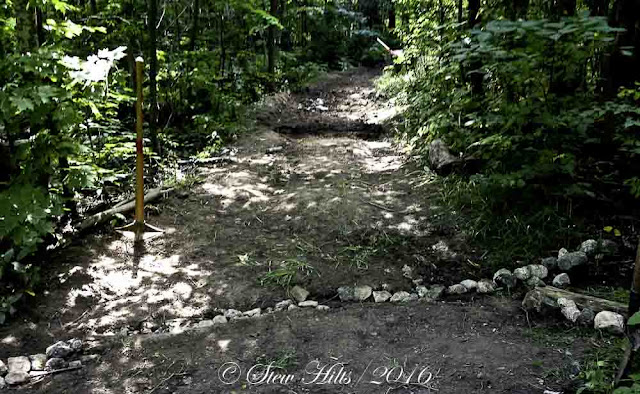 Well, the three students made quick work of our trial length of trail for rehabilitation.  Luckily it had rained a few days before; we feared the soil would be too hard to even dig.  Here, they`ve built a small rock-filled drainageway across the trail, and in the background, done a lot of heavy shovelling to fill in that trench in the first of the two pictures above. 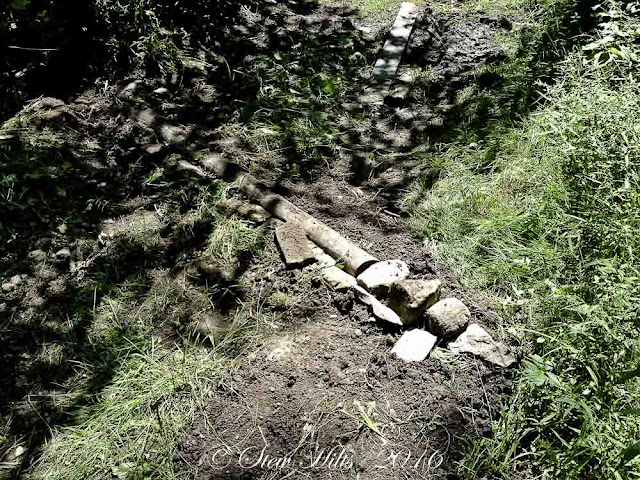 Here`s another drainage channel they built across the trail.  We hope that allowing the small springs to drain across the trail without ponding will eliminate those ruts.  In any case, the students finished all the work we feared couldn`t even get done in two days, in one day, and were able to tackle another long stretch of trail on day two.  Sorry, don`t have pictures of that one, but tomorrow, the bridge over a beaver-flooded channel they helped build.

You may have noticed that this post was published twice; that's something that either Blogger or my computer is doing to me!  I've deleted one, but apologies to the three of you whose comments disappeared with it. 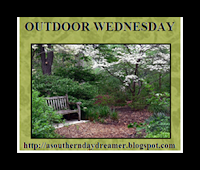