The hike I described the other day, with a friend and his two grandsons, 10 and 13, down to Mill Creek, was preceded by an exploration of Metcalfe Crevice.  At various places along the Niagara Escarpment, enormous slabs of limestone, 10 to 30 feet thick and 50 to 100 feet tall have slipped forward on the slippery clay layer underneath, to become separated from the main cliff.  They thereby form deep crevices known as 'crevice caves', even though they are usually open to the sky. 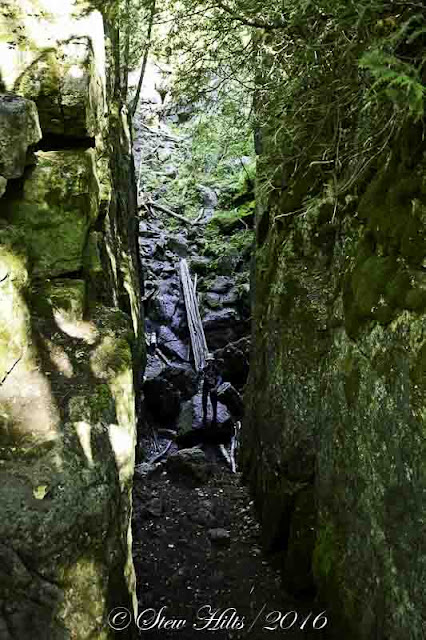 Metcalfe Crevice is one of the easiest to explore because a Side Trail of the Bruce Trail runs right through it.  Never-the-less, it's a challenging rock scramble, not your usual walk on a path in the woods.  This is the spot where you drop down about 4 feet to get into the crevice, and I usually tell adult hikers to be extra careful.  As you can guess the boys just jumped down ahead of us and off they went! 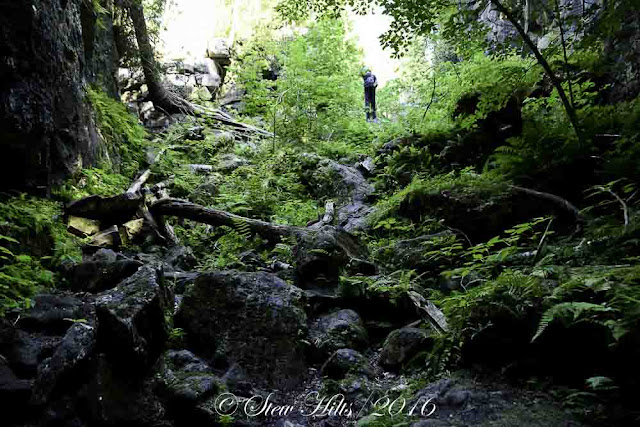 It's such a unique environment once you're down there, cool and moist, with tall rock walls on either side. sky above and mossy rocks below.  Sunlight rarely if ever reaches the bottom of parts of this. 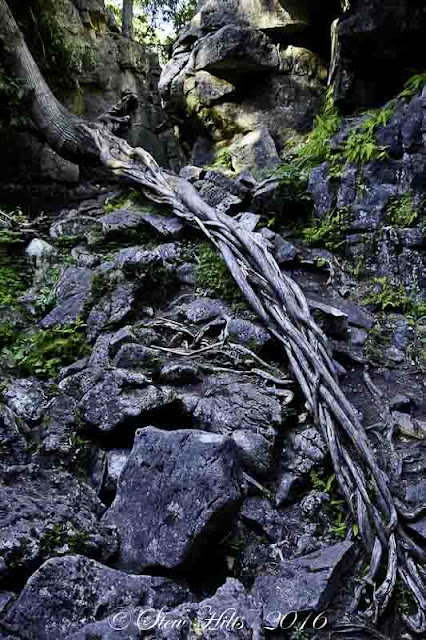 I've seen this amazing long twisted Eastern White Cedar root many times, and always look for it shortly after we get in the crevice.  The tree grows entirely out of cracks in the rock. 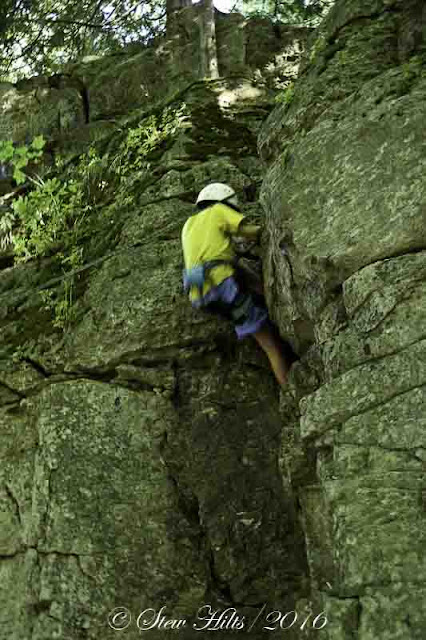 Outside, before we headed in we watched some rock climbers.  Metcalfe Rock (on the outside of the crevice) is one of the most popular rock climbing cliffs in Ontario.  This day the local guides, Free Spirit Tours, were teaching two young teenage boys to climb.  I thought it might inspire the two young ones we were with.  I'm a firm believer that teenage boys need some life-threatening activity to challenge them if they going to grow up normal! 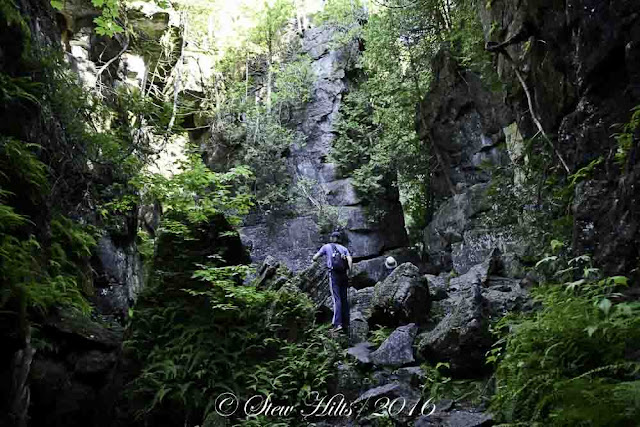 Anyway, we headed on through the cliff.  Here we're headed up a stretch where we crawled through a cave for about 20 feet before coming out on a ledge that dropped 20 down.  Again the boys had no trouble at all while the two 'old guys' inched their way carefully down. 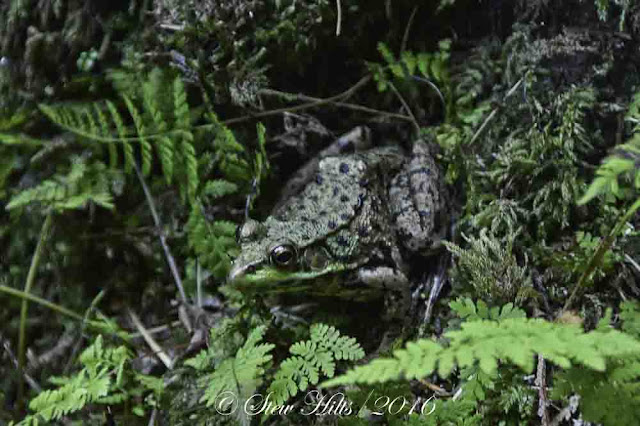 It was a lot younger eyes than mine that spotted this green Leopard Frog in among the green moss and the green ferns. 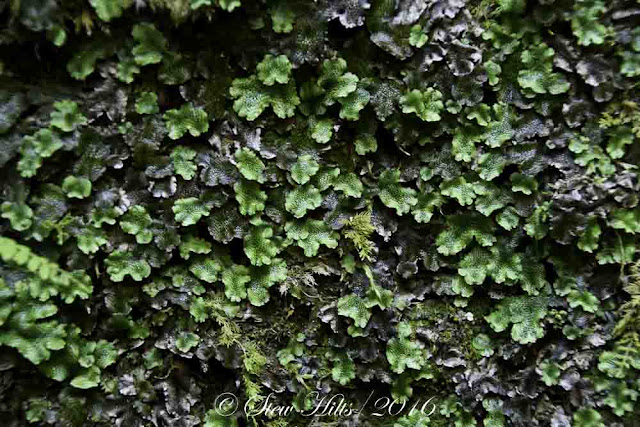 But I spotted this liverwort, covering the face of a boulder.   Wish I knew how to identify these. 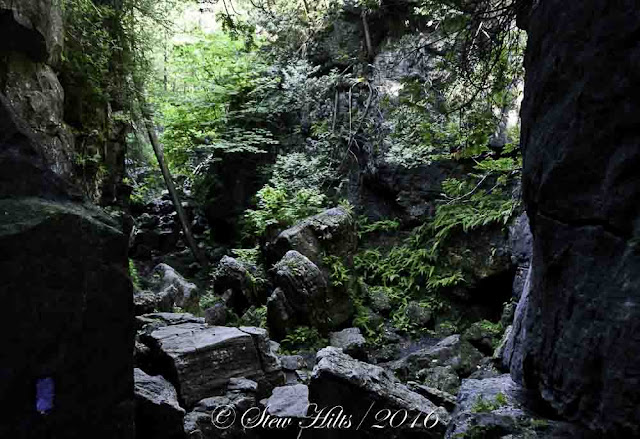 You can see that this is a Bruce Trail Side Trail by the blue blaze on the left.  It used to be the main trail - certainly the most rugged short stretch of trail I've ever seen. 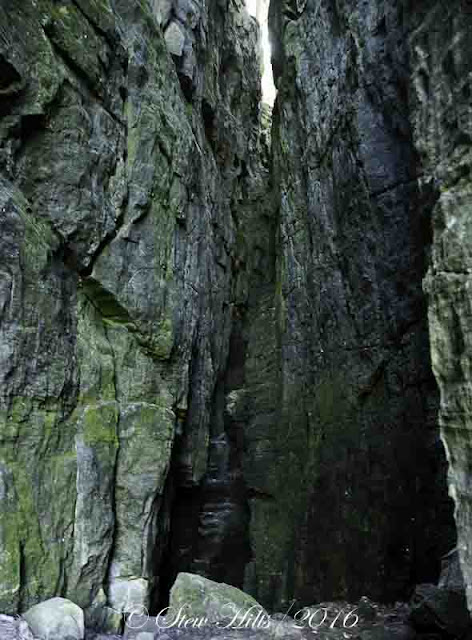 Sometimes the big slabs of limestone end up leaning back against the main cliff, pinching off the crevice, or forming actual caves.  There was a cold breeze blowing down this one, from the cracks in the rock.  You do have to be extremely careful about not getting yourself into 'tight' places; last year a man had to be rescued after spending 12 hours overnight stuck 50 feet deep in a too narrow crevice near here.  Luckily a hiker heard him calling; cell pones don't work down there! 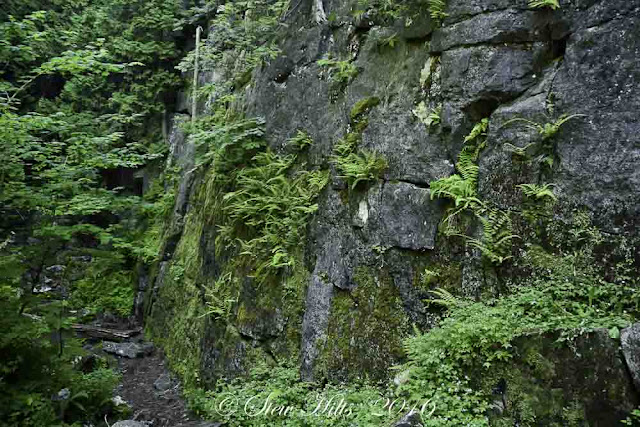 The parts I like best are the moist shaded vertical rock walls covered with ferns, moss and liverworts.  I'm leading a 'Slowpoke Walk' to look at ferns in another part of the Bruce Trail similar to this on Tuesday. 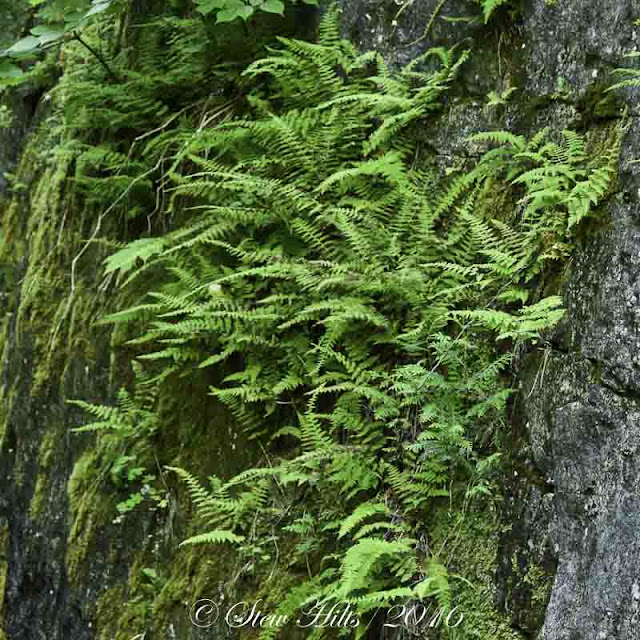 These ferns are the very long narrow fronds of the Bulblet Fern, Cystopteris bulbifera.  (Believe it or not I remembered that Latin name, memorized when I had to lie on a hospital bed for five days with my eyes bandaged closed after surgery 47 years ago!  I was a budding botanist then.  Shortly after this we exited the crevice, and headed across the road for the other part of our hike.