We visited three more farms where they were making maple syrup on our tour, and all of these were of a more moderate size, smaller family operations.  In some ways these are more interesting, because it's so 'up close and personal', and two of these farms also had animals.  I'm including a few pictures from last year's tour today to round out the story. 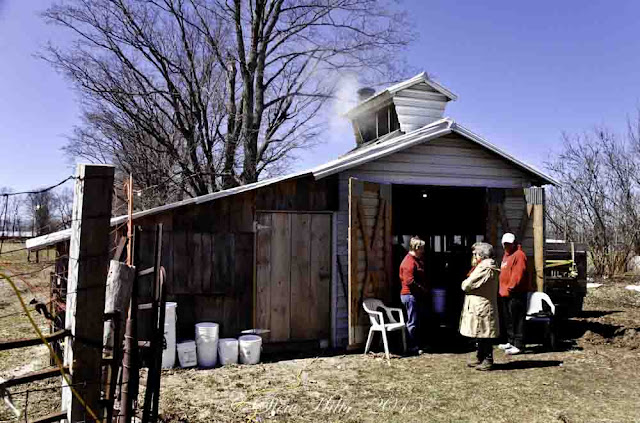 This is the small sugar shack at Dejong Acres, a farm that sells a variety of local products through its farm store, but specializes in raising lamb.  They have a herd of over 1000 ewes. 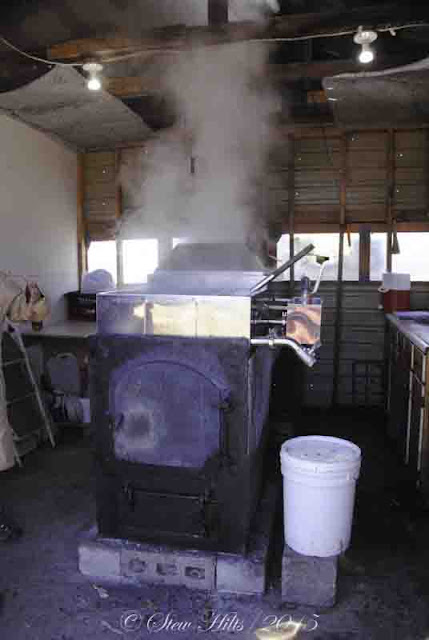 It's just a small evaporator, and they tap 300 trees, giving them enough syrup to sell in their own farm store.  The syrup is drained off through a filter into the pail, and manually transferred to the finishing pan. 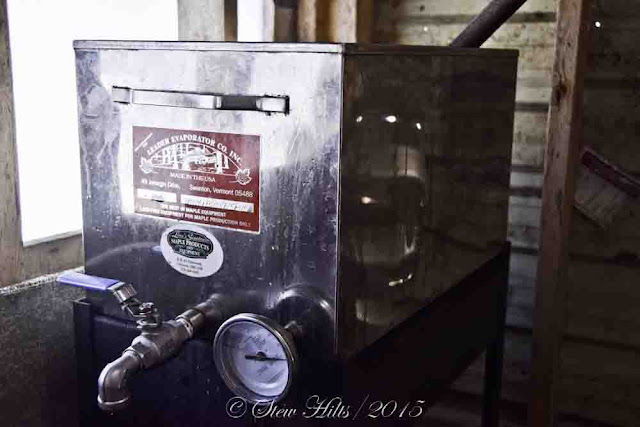 And this is the finishing pan, a simple square pan over a propane burner where the temperature can be controlled carefully to reach that 66% brix measurement. 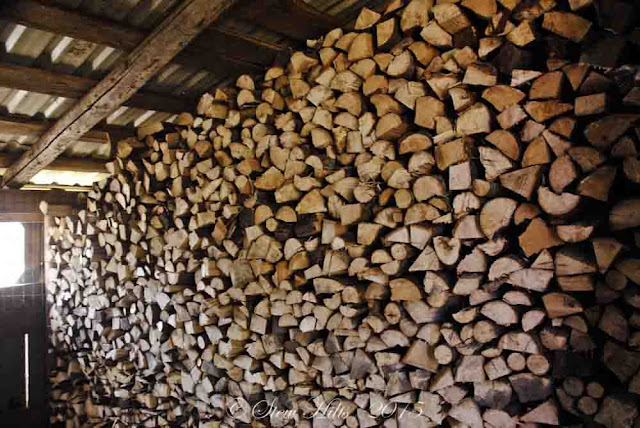 There was still a fair supply of wood in the adjoining woodshed, suggesting that a lot of the manual labour in making maple syrup goes on at other seasons.  Their sugar bush is at the back of the farm, and they simply bring the sap to the sugar shack beside the house by tractor. 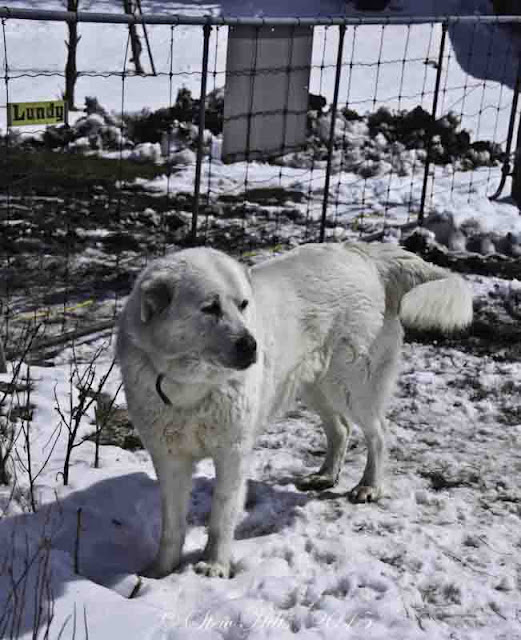 But they also have sheep, and sheepdogs.  These are Maremma Sheepdogs, an Italian breed of sheepdog, and they live with the sheep full-time.  For their large herd of sheep they have 15 sheepdogs! 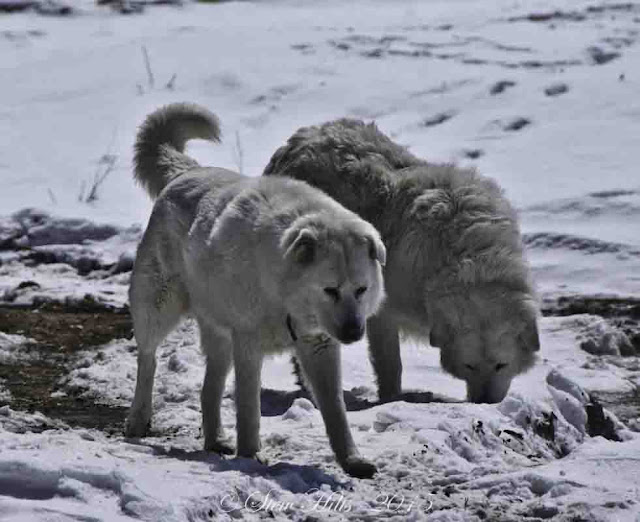 These are working guard dogs, watching out for coyotes here, and also helping herd the sheep.  This breed was raised in Italy to guard against wolves. 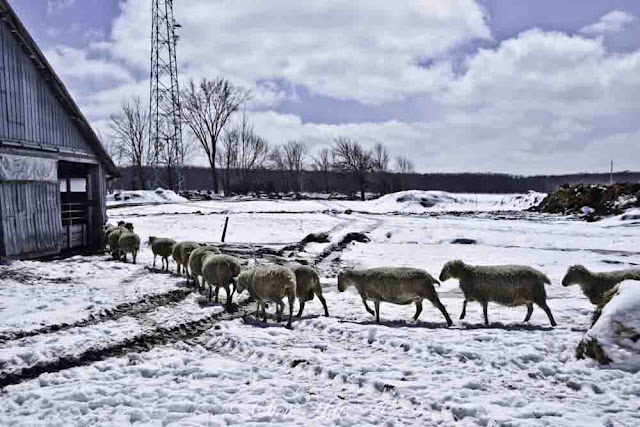 Have you ever heard that sheep will follow a leader?  Well they do!  One or two decided it was time to head back behind the barn and they all blindly followed suit. 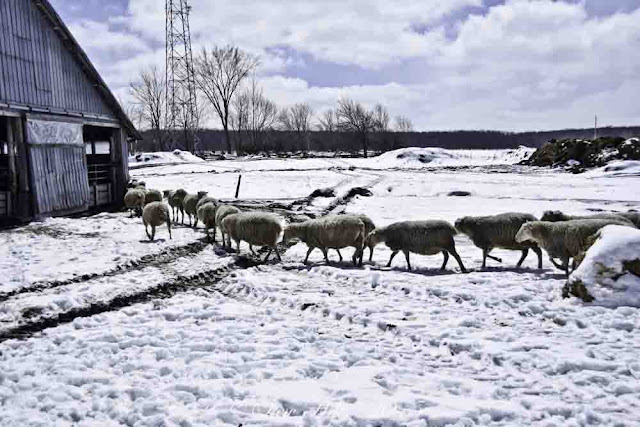 No lambs to be seen yet, but it's lambing season soon.  For anyone local who is interested, check out the Dejong Acres website giving details of its farm products and where they can be purchased.  This looks like a great place to get local 'from-the-farm' produce. 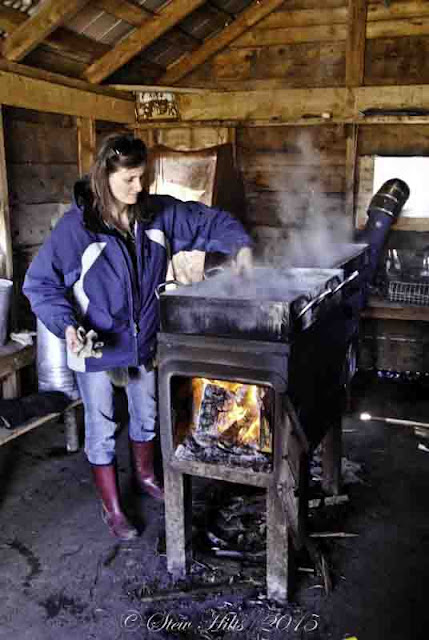 The next farm we visited, the Van Bilsen family, is a smaller family scale operation.  They tap about 70 trees using buckets, and boil it down on this homemade evaporator- an old wood stove with the top cut off and a second-hand pan on top, all extended with part of an old furnace burner, with a second pan.  They spend a lot of time standing and watching! 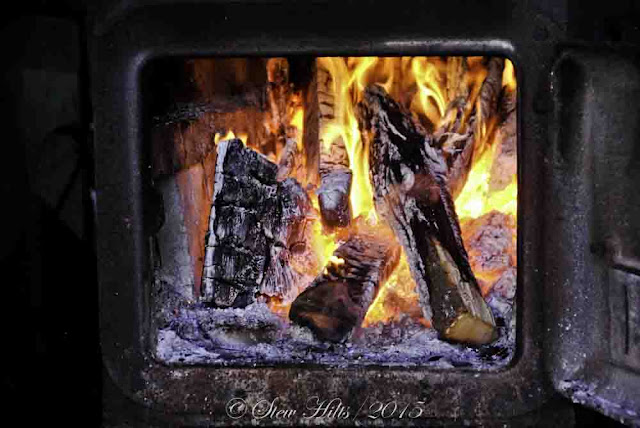 I love the look of the fire boxes when they open the door to throw in more wood.  Reminds me of the years of having a wood stove.  They just produce enough syrup to use and give to family and friends. 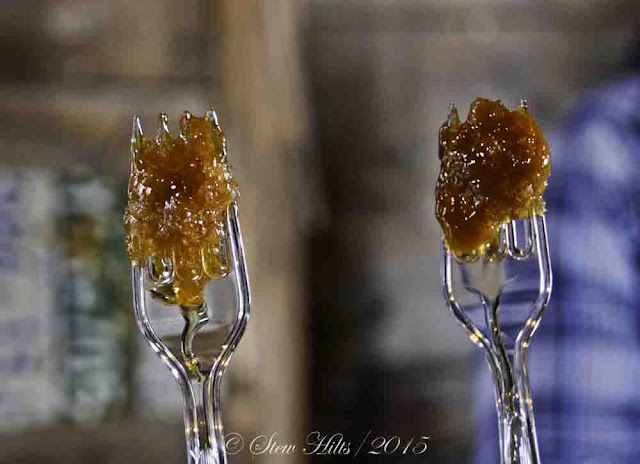 And this was where we got our best treat of the tour - maple sugar taffy!  It was DELICIOUS! 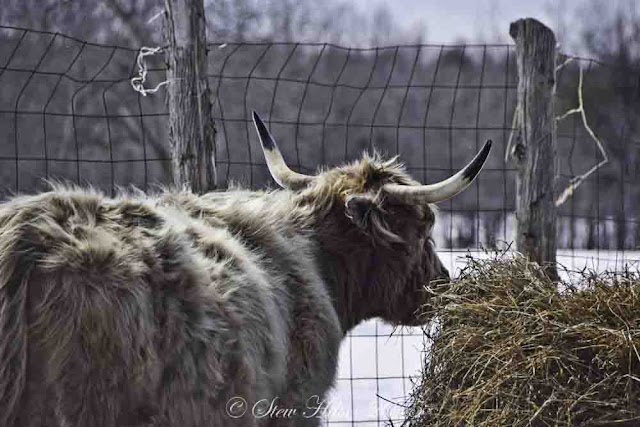 They also had a couple of Highland Cows, but this post is too long already, so we'll have to come back and visit them later.

I hope that this was our last day of winter!  It stayed near freezing, though just above enough that the snow was melting - but the forecast for the week looks great!  Sunny and getting warmer for 6 days in a row!