Hike on the Trail

Besides chasing waterfalls, the nice weather has meant that hiking and paddling season is back, and I've been making the most of it!  Last week a friend and I hiked west on the Bruce Trail starting at the 7th Line, the road I always drive straight north from home to Meaford.

We started at one of my favourite viewpoints from the trail, looking north toward Georgian Bay where Meaford is out of sight beyond the far hill.  Above the escarpment on the left is the Land Forces Central Area Training Base (the 'Meaford Tank Range') where many army reservists practice their stuff. 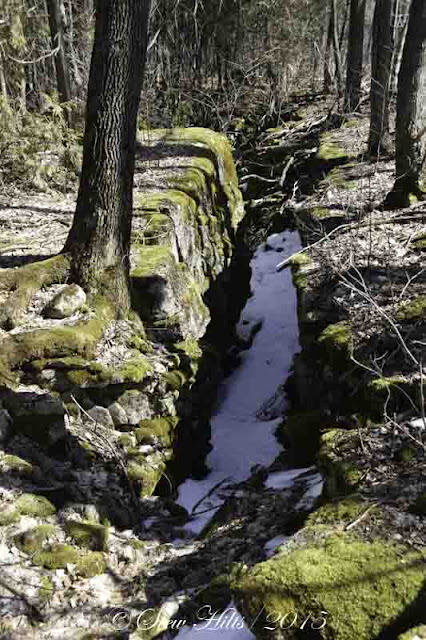 The first part of the landscape along the trail here is a rocky one, with a cliff dropping off to the right, and numerous crevices in the limestone that you're walking on.  They range from a few inches to a few feet wide, and from 3 or 4 to 30 feet deep.  At this season, they still have snow and ice in the bottom.  It's a very typical feature of the Amabel limestone that makes up the top layer of the Niagara Escarpment. 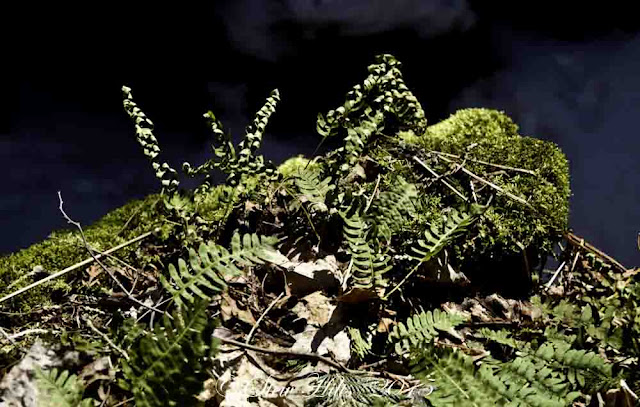 And the edges of the crevices are decorated in green moss, with the remnants of last year's ferns still to be found.  Several of the fern species found here have evergreen leaves which survive under the snow, though they'll disappear over the summer after the new fronds unfurl.  This is Polypody, the fronds that were exposed to the winter air curled and dried up. 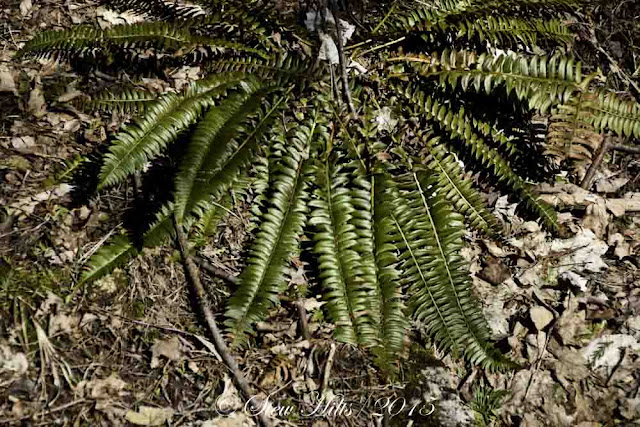 This one is Northern Holly Fern, very typical of this sort of moss-covered limestone habitat along the trail. 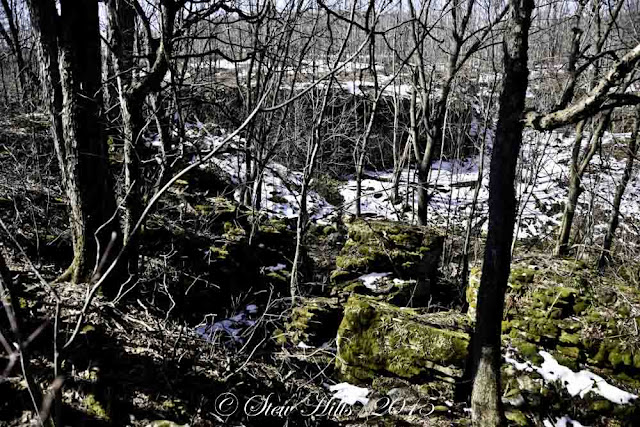 There's an ephmeral stream that mostly flows in the spring, and as we got closer we could here the water.  I looked over the edge of the cliff into the valley to see if I could see it.  I couldn't, but do you see what I spotted on that boulder in the lower front? 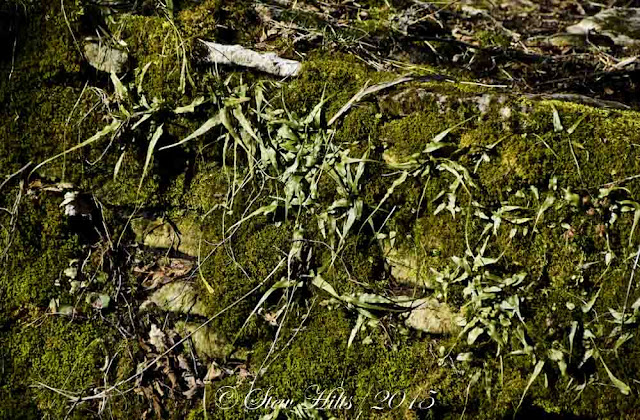 It's covered in Walking Fern!  This is one of the rare and unique ferns around here, that only grows on the mossy boulders along below the edge of the cliff.  It's known by that moniker because the tip of some fronds will root and form a new plant, letting it 'walk' (very slowly) across the moss.  It's the symbol of the Bruce Trail. 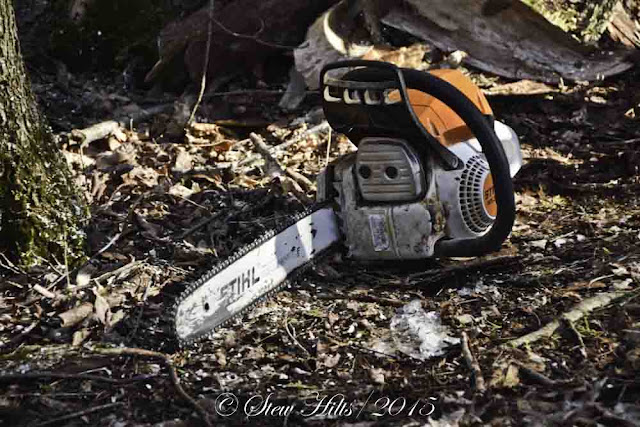 We also ran into the volunteer chain saw crew clearing some dead trees off the Bruce Trail, the first time I'd ever actually encountered them in action.  They're a dedicated bunch, sometimes carrying that chainsaw for a long distance to get to trees down across the trail. 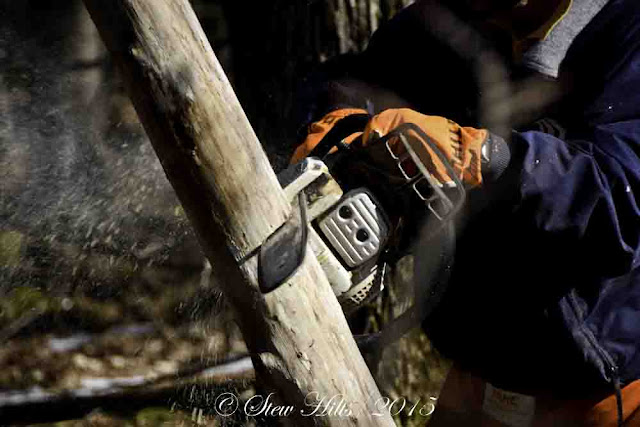 Not just anyone can join the chainsaw crew; you have to have both the equipment and the safety training to help with the work.  But they make a big difference to the trail.  I've started making sure I report downed trees, which helps them plan their work.  This is a busy season for them. 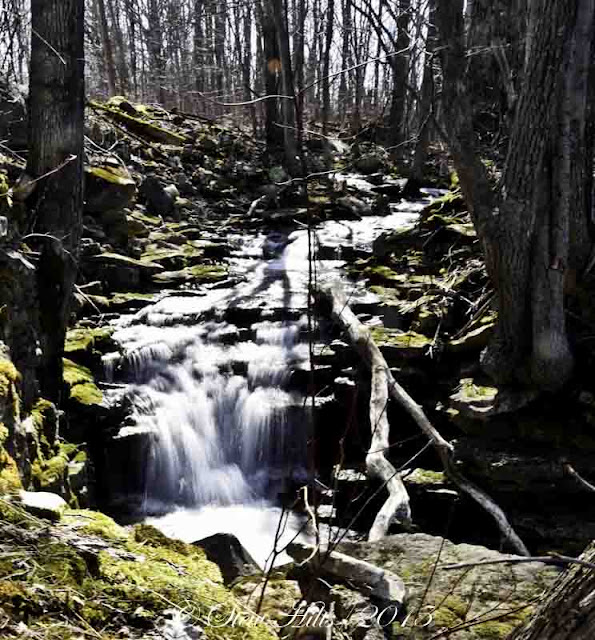 Sorry, but I couldn't avoid waterfalls entirely.  That little ephemeral stream I mentioned does drop over the cliff, forming a temporary waterfall in the spring, after running down over this series of moss-covered limestone ledges. 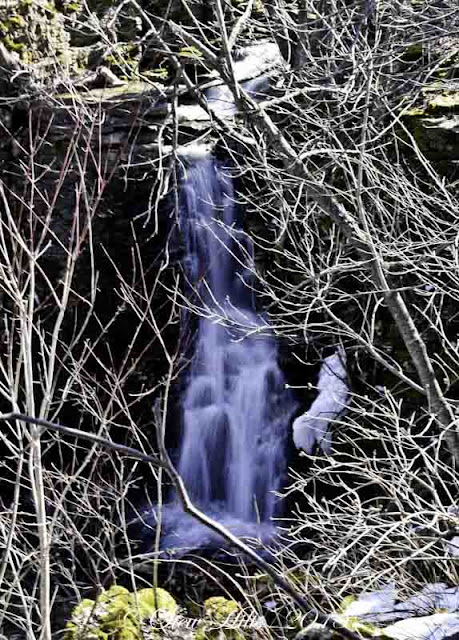 A lot of branches somewhat obscured the view, but I did my best! 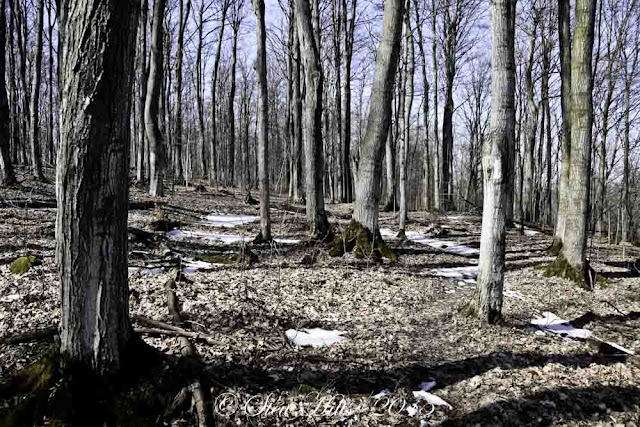 We carried on into a Bruce Trail property that I know as Clarke Woods.  It's a beautiful deciduous forest, complete with lots of spring wildflowers - though not yet.  It has a different beauty that's rather stark in these days of mid-April. 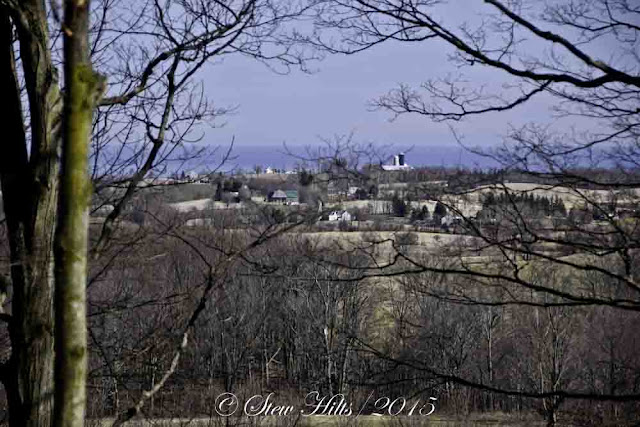 But you have the advantage of a view through the trees, which will mostly vanish when the leaves come out.  Clarke Woods is one of those high outcrops of the Niagara Escarpment that rises well above the surrounding landscape and stands out from quite a distance..

I couldn't resist another view north when we got back to the cars.

During this walk, the idea of completing all the sections of the Bruce Trail within the Beaver Valley started growing in my mind.  I've walked quite a bit of it, but being a photographer, I tend to walk the sections that most interest me (like those with waterfalls!).  Now I'm thinking that if I push myself a little, I could complete the entire trail in the valley this summer.

But I'm going to skip the short bits that are on roads.  Some hikers are committed to the idea of completing a trail 'end-to-end'.  I have no such interest, and generally I'm much more likely to stop and look around at what I'm seeing rather than just putting on the kilometers.  But it should be interesting, and make another reason to get me out.  I need to complete that 7 hours of cardio per week as a minimum, and that would help.  So far this week it's 5 hours in 4 days.