Flooding in the Valley

Before I go on sharing pictures of the several waterfalls I've been to, I should tell you about the local flooding going on.  It's not much compared to places that sometimes suffer major floods, but it's certainly disrupting some peoples' lives here! 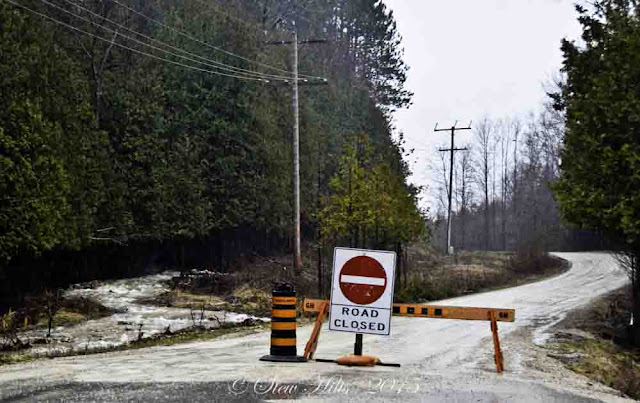 As I said yesterday, after 3-4" of rain in four days, the rivers are running high.  The gates of the Lake Eugenia dam had to be opened to keep homes from flooding, but that sent extra water down the Beaver River - a LOT of extra water!  In several places roads have been closed, with water over the road.  Notice the stream on the left hand side of this picture, normally a little trickle in the ditch. 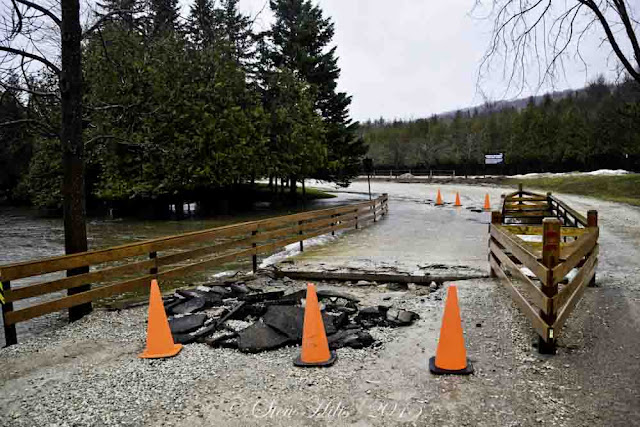 One of the biggest local impacts has been washing out the bridge into the Beaver Valley Ski Club.  This is a double-lane bridge, over a normally quite small branch of the river.  But now the water is backed up against the upstream edge of the bridge, flowing overtop and loosening pavement. 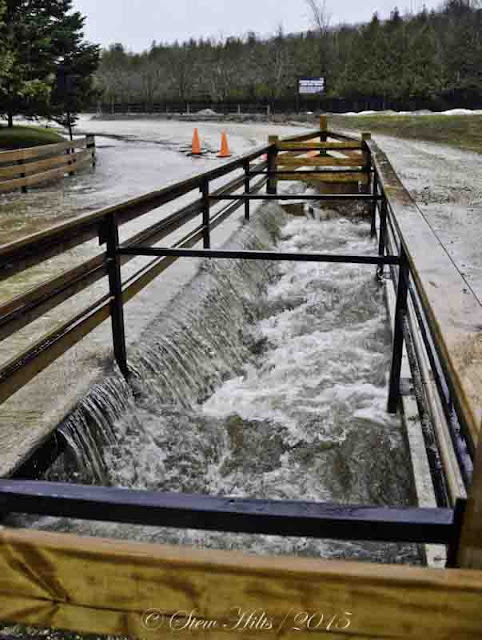 It's dropping back down into the river in the gap between the two lanes of the bridge, but it's what's going on underneath that will determine the structural integrity of the bridge  - once the water goes down enough that they can assess it.  People live in here, so they are ferrying them to their homes by ATV from the top of the ski hill. 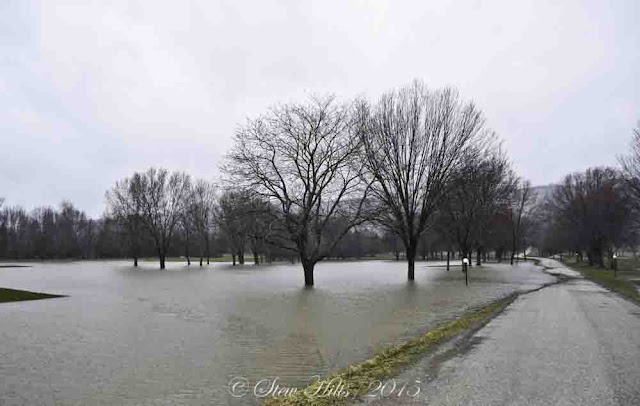 The river further downstream has totally flooded the golf course at Talisman Mountain Springs Inn, the golf course currently in the process of being restored.  Water is flowing across the access road.  And nearby, 2 or 3 houses look flooded; those are the people probably suffering the most. 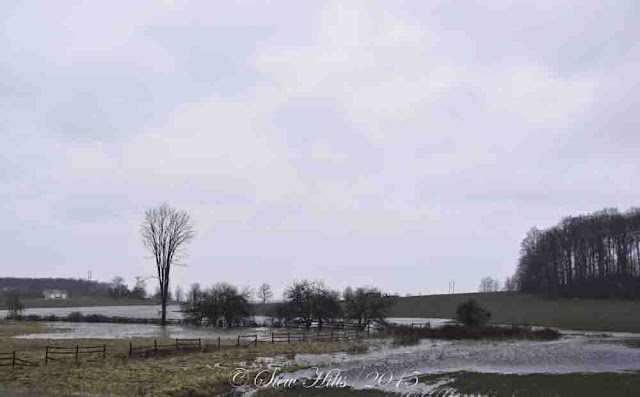 Lots of farm fields like this are flooded, and the weather is dull dark and grey. 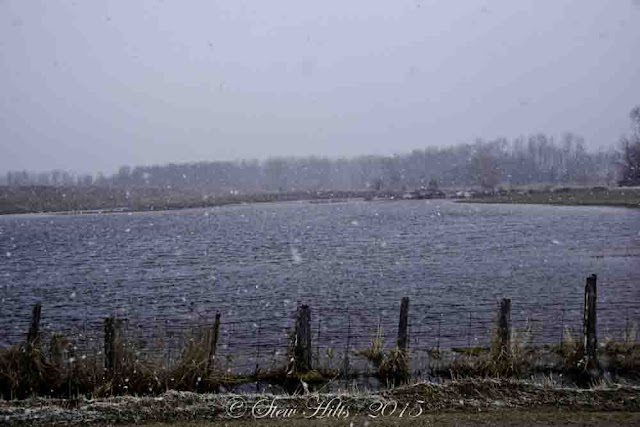 This is the weather late this afternoon; yes we are back to snow, an east wind blowing it in my fce in this picture.  The forecast is for snow and freezing temperatures all week.  And small spring puddles that form in fields like this every year are now small spring lakes! 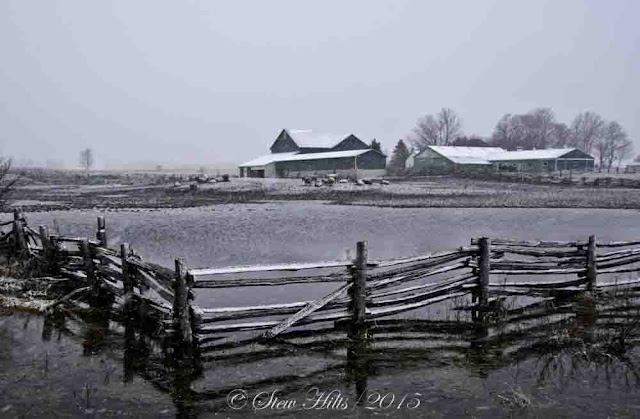 LOTS of flooded fences around; luckily the barn here is up higher than this low spot in the pasture. 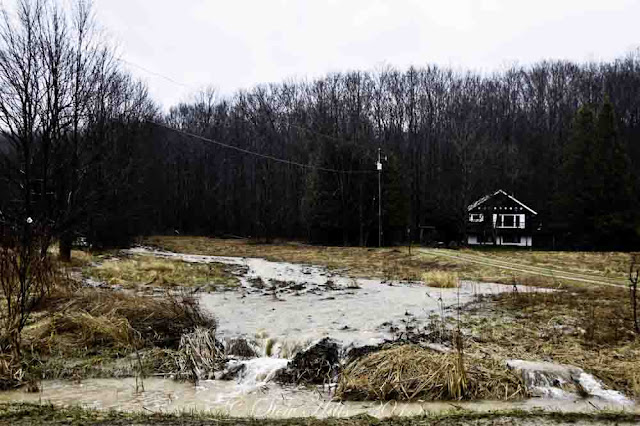 And there are lots of little streams that usually don't really exist, coming down the very steep slopes of the upper valley.  It's no wonder the river itself is over its banks! 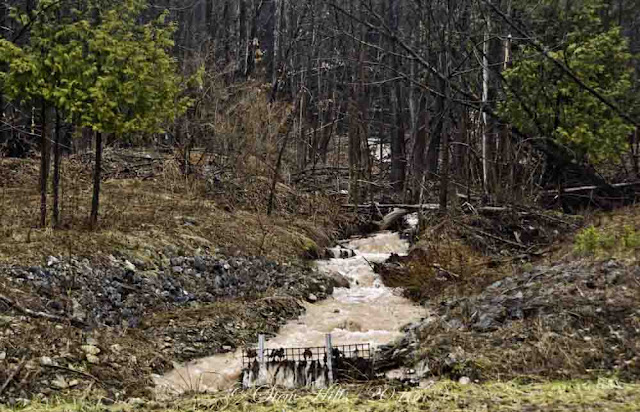 The Ordovician Shale layer that forms the lower slopes in the valley erodes easily, so the turbid colour in this stream is not from farm fields, but from forested slopes where the torrent of runoff is cutting into the shale.

I would have been out getting more pictures today, but I was off to a Bruce Trail Conservancy meeting of all the club Stewardship Directors (I'm the volunteer who does that here in the valley).  I was pleased to learn that our club is probably doing as well as any in terms of moving ahead with new initiatives, as well as getting all our reports in annually.  Meanwhile, Mrs. FG was off to what she thought was a rug hooking show in Owen Sound.  Turned out it wasn't a show, but a 'Hook-in' where the ladies gathered to hook together.  But she knew a number of them who are also in the Quilting Guild, so she had a nice visit with a number of the hookers.

And here's a video, just for the sound track. Local readers will appreciate this, 'cause it's such a contrast with the usual trickle over the bedrock - Eugenia Falls at full throttle!