We've been noticing a small pond where we saw a beaver last year, that has grown into quite a substantial pond, with much higher water levels, over the past few months.  We saw no sign of a dam at the end of the pond where we drove by, but presumed the beavers had been hard at work somewhere nearby. 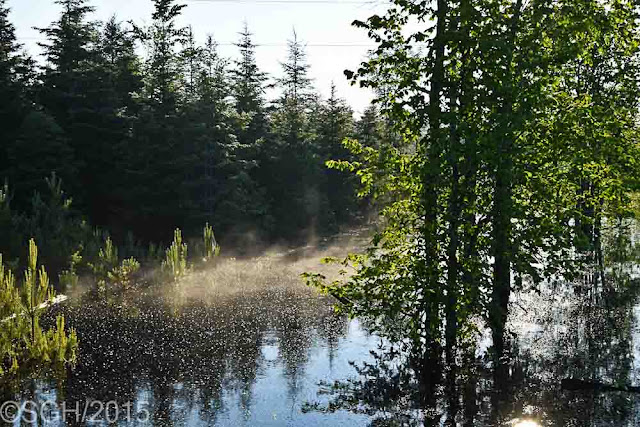 Had to drive to parts south yesterday, and in the early morning light I stopped for a quick picture or 3. The sun was sparkling off the water, and the mist was rising along the shore.  Note the flooded pine tree on the left; the water level has been rising fast the past few weeks. 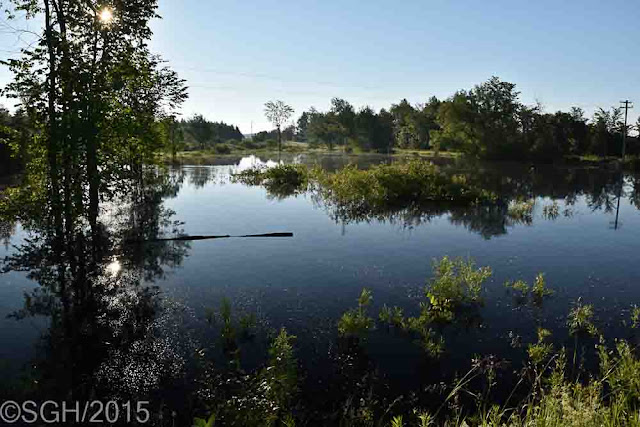 I hid the sun behind the leaves of the trees, and  was able to get a couple of nice shots of the pond and reflections. 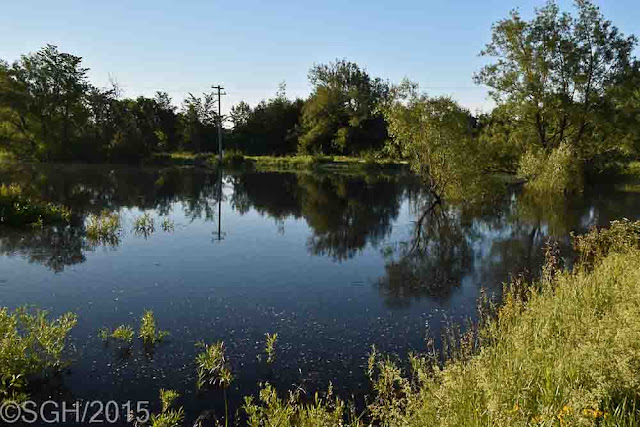 The water level actually looks like it's getting fairly close to the road over there on the far side.  Just beyond the road is a branch of the Saugeen River. 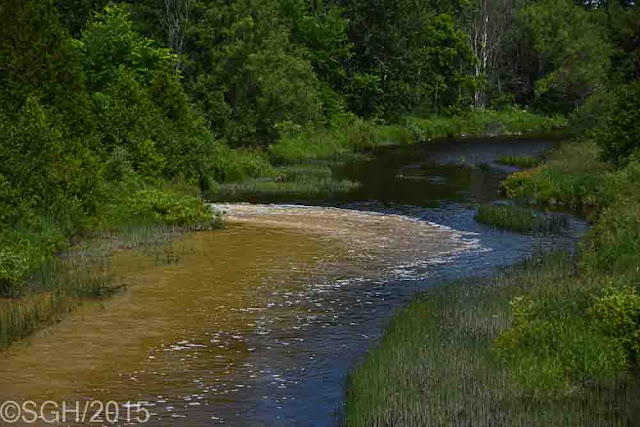 Returning some 9 hours later I noticed some muddy water pouring into the Saugeen and stopped for a picture.  There was quite a loud roar of rushing water. 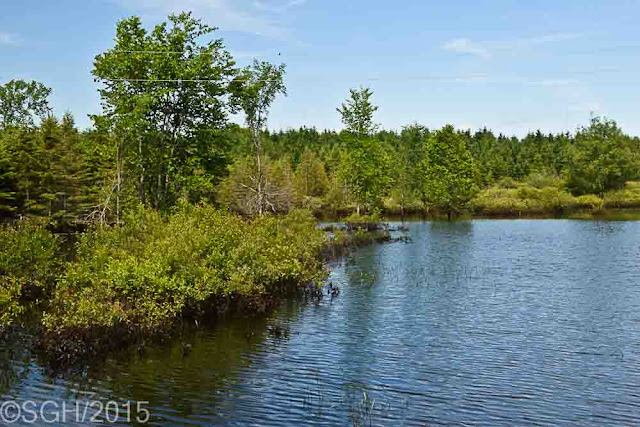 So I stopped again by the pond, and it looked to me like the water was draining away.  Notice the dark bottom foot of all the shrubs around the shore. 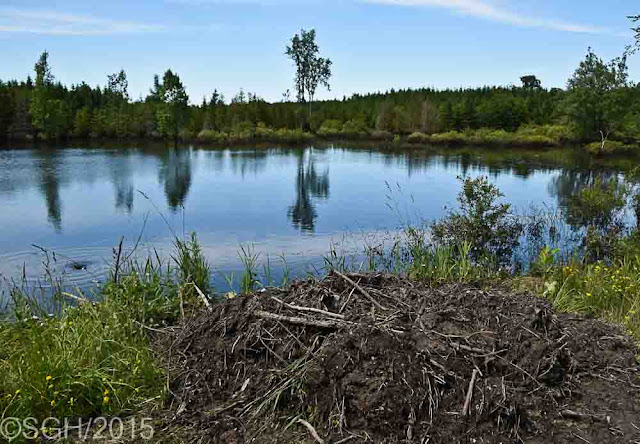 So I backed up, turned down the other sideroad, and found this.  The township had brought in a backhoe, and cleaned out a pile of mud and branches that was blocking the culvert.  Notice the whirlpool on the left of the picture where the water was being sucked down fast! 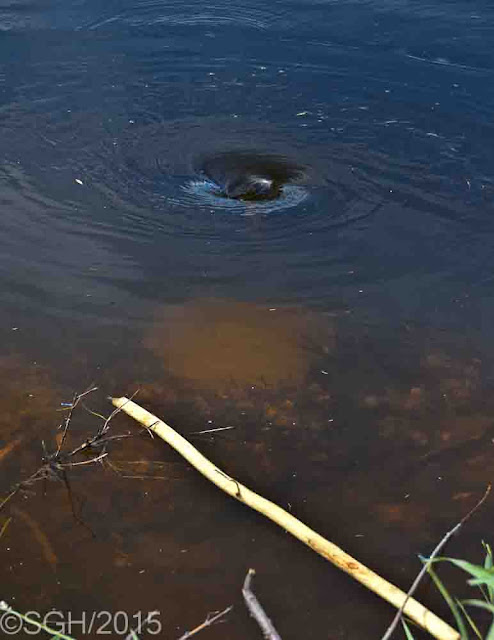 Taking a close look, I could see the culvert, deep under the surface of the water.  Those beaver hadn't wasted their efforts building a dam; they'd just blocked the culvert! 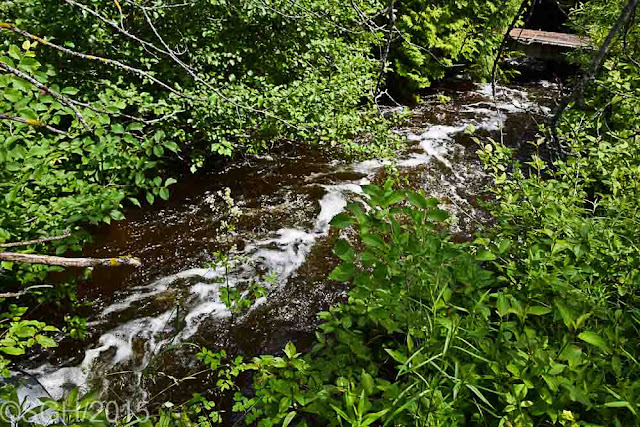 On the other side of the road the water was absolutely roaring toward the river, where normally there would be a tiny trickle. 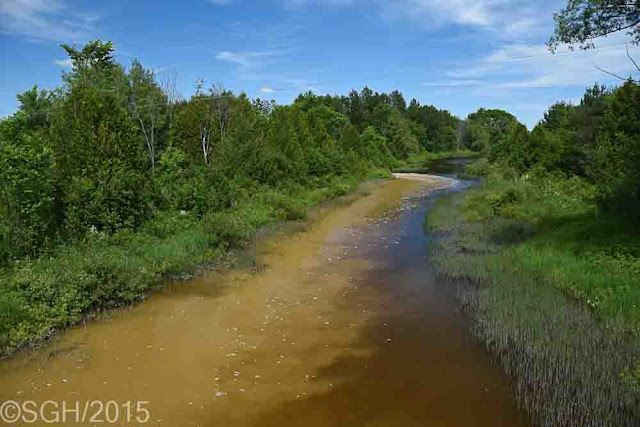 And the result was this muddy torrent stirring up the waters of the Saugeen.  I'm not sure whether to feel sorry for the beaver; indeed, this may just be the beginning of a long term battle with the township works crew.  But even when the water subsides to culvert level, we know that there will still be a substantial pond; the big rodents won't be totally done out of house and home. 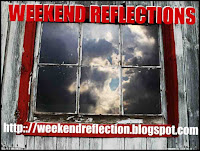