The Garden in Spring

When I'm illustrating the seasons in the garden, I always think of the flowers that come into bloom one after another.  But there's actually much more to it than that - the layout and design, the growth of plants that won't flower til much later, the creation of new garden features, and so on.  And in spring there's usually a lot of work to be done!  Here's a bit of a look at the garden at the moment. 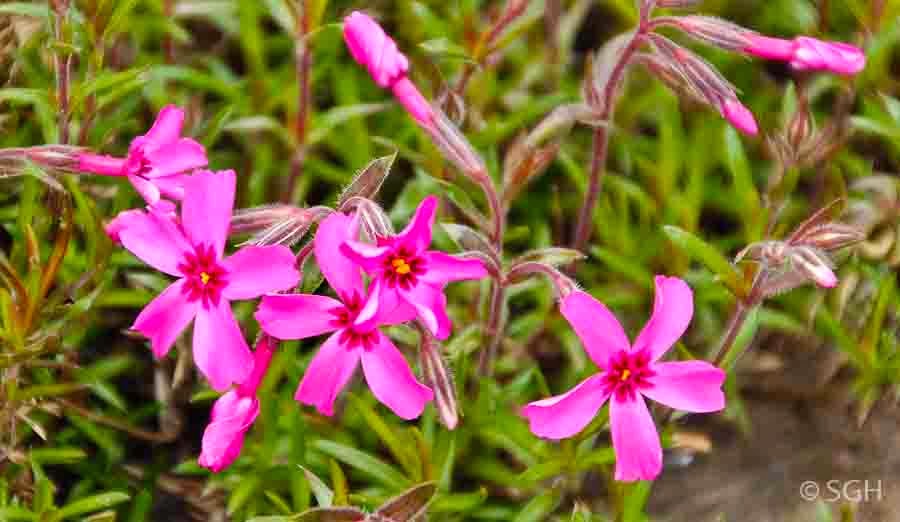 Part of our garden is a scree garden, and the first of the Pinks has just started to bloom.  We had a steep slope left to deal with after the original grading, so we've made this short slope into a scree garden, as in the two pictures below. 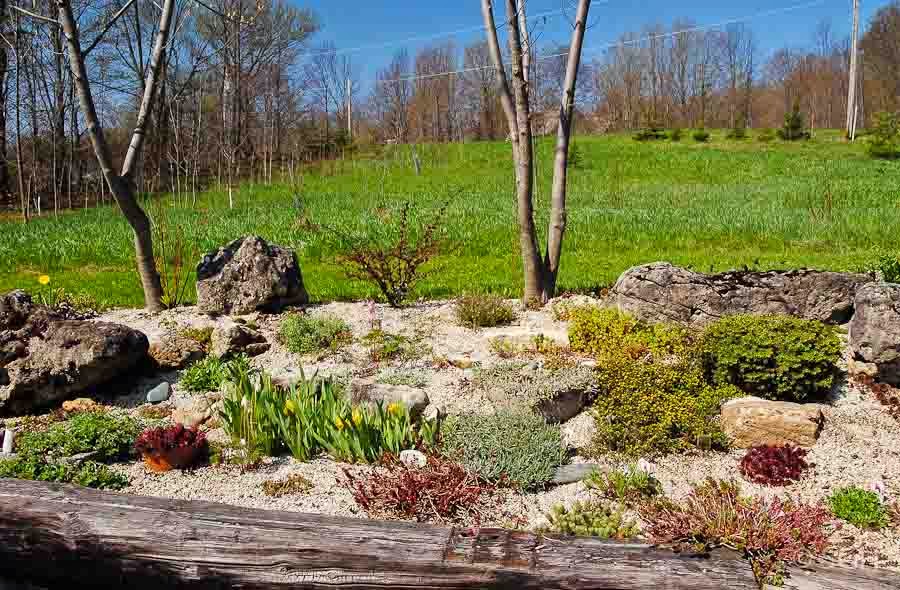 When I say it's a 'scree' garden, I mean it features a lot of alpine plants and is mulched with fine 1/4" gravel.  We were inspire when we saw the amazing alpine gardens at the Royal Botanical Gardens in Edinburgh, Scotland, though theirs are infinitely more interesting than this! 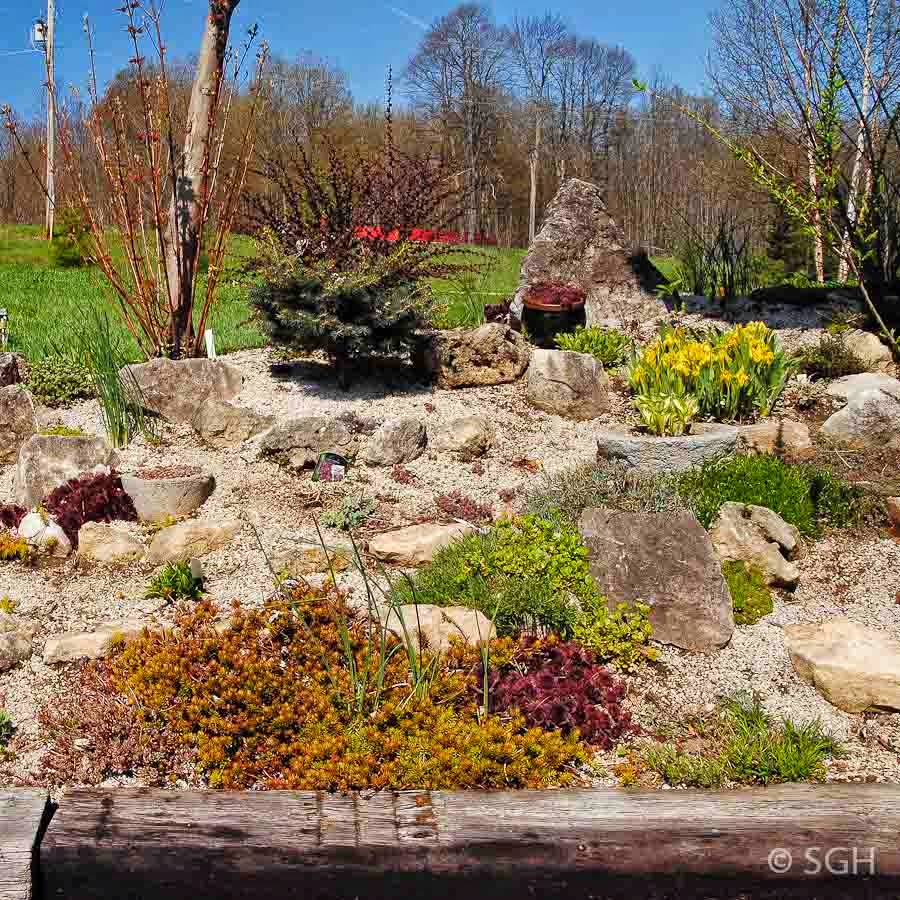 At any rate, I really like the appearance of it.  And it was surprisingly easy to put some rocks scattered around, plant things, and throw on the fine gravel mulch.  It has successfully protected the steep slope, and it's quite unique among any gardens I've seen. 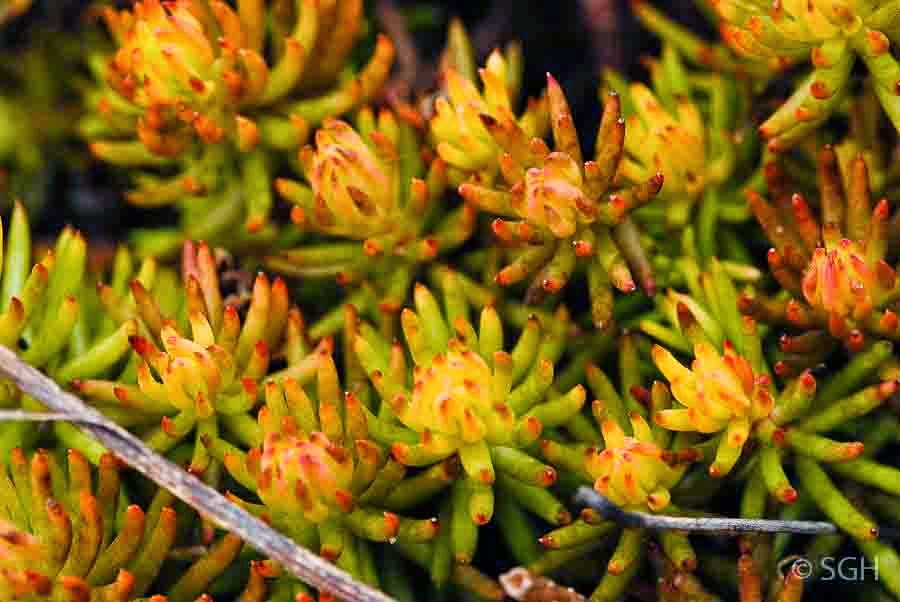 This is one of many groundcovers in the scree, a plant which doesn't really need flowers at all to look interesting - though it will flower later on.  I'll be posting more pix of this garden over the season. 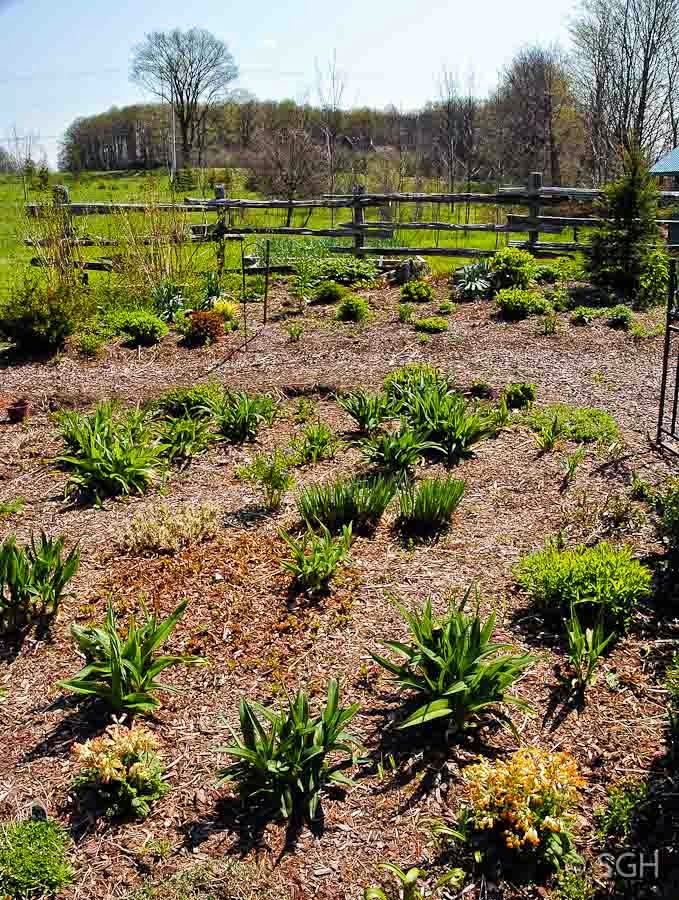 And as for the rest of the gardens, they mostly look like this at the moment, all the summer's plants up 8-10", bright and green.  This picture shows about 1/8th of the total garden area. 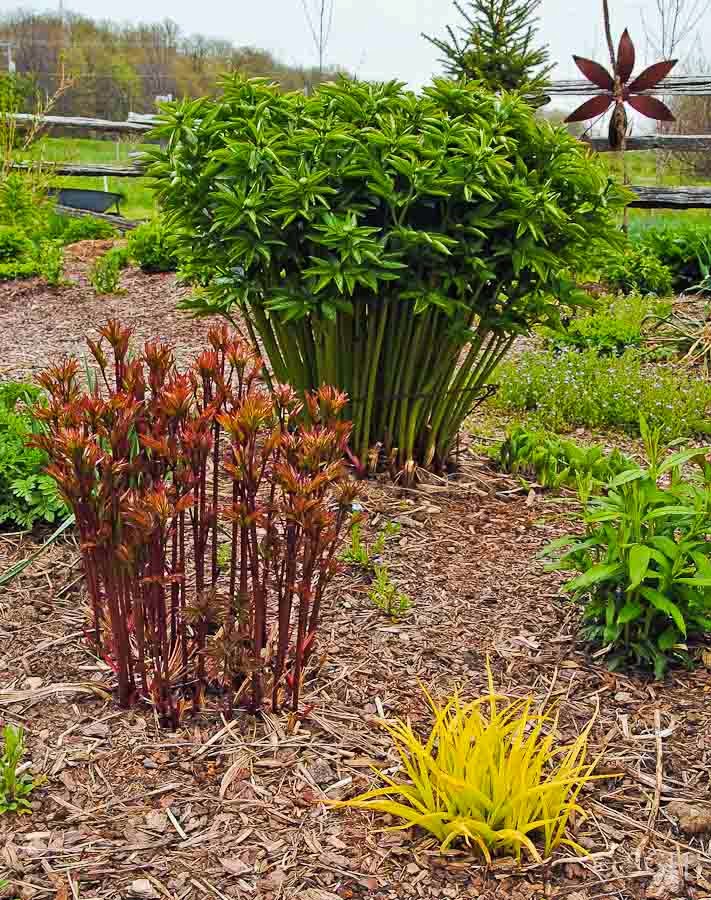 Among all those garden plants, the peonies will be the first big ones to bloom.  They just burst out of the ground as early as anything, and grow like mad during May, all initially that reddish-purple colour of the plant on the left here.  It won't be long until the green one in the back is ready to flower.  Why does one particular plant grow 2 feet tall by now, while almost all the rest are still only a few inches out of the ground? 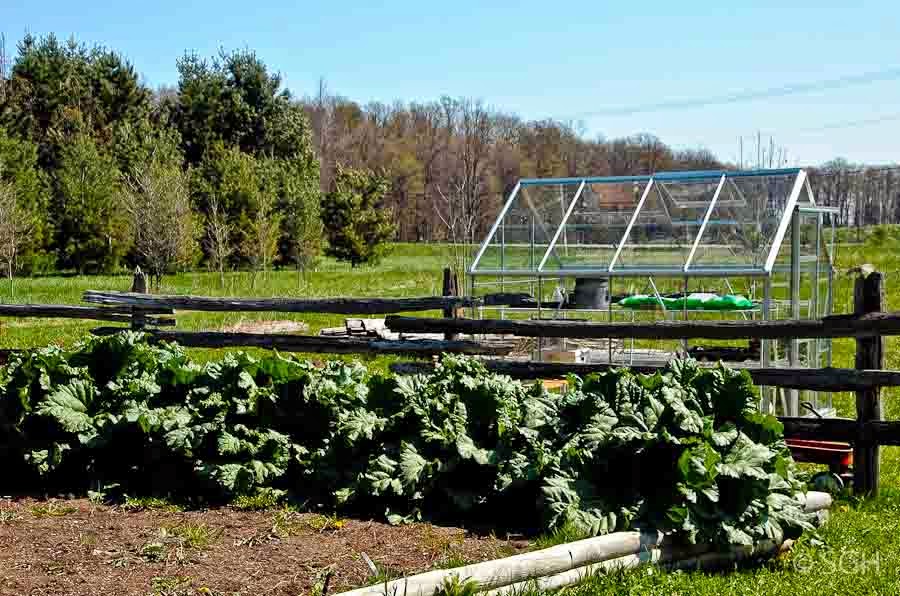 It's not alone.  The other plant that bursts out of the ground (it's already showing above ground when the snow melts), is the rhubarb.  This is the only bit of the garden that I can claim as my own.  Otherwise I'm just the 'Under-Gardener', but I'm ready for my first rhubarb harvest.  The greenhouse is brand new, and we're just figuring out how to use it most effectively.  The vegetable garden isn't planted yet because of the continuing risk of frost.  Tomatoes, beans and squash will probably go in about June 1. 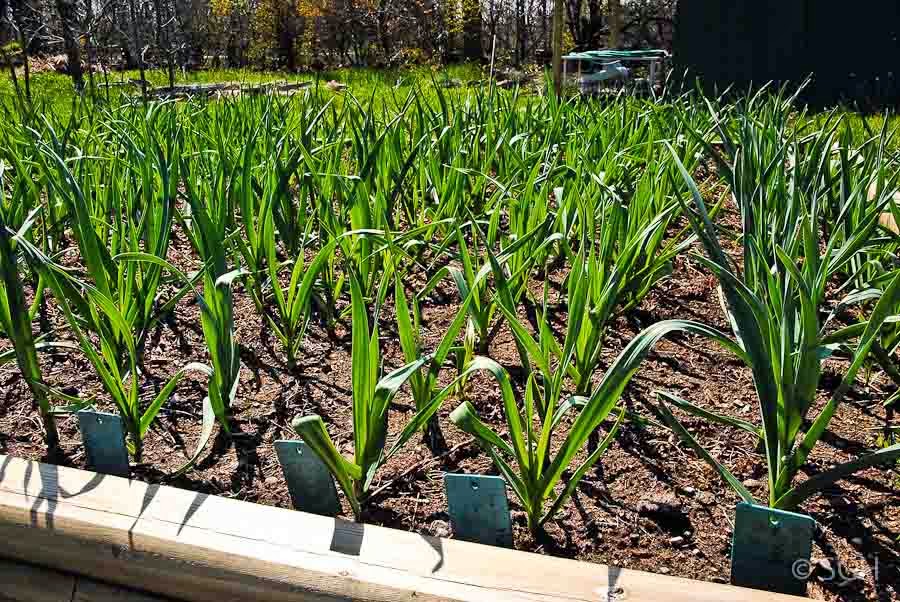 The garlic patch is in great shape.  The Head Gardener has been growing specialized garlic growing stock for years now, and keeps 22 varieties all carefully labelled and separated when harvested.  This was planted last October. 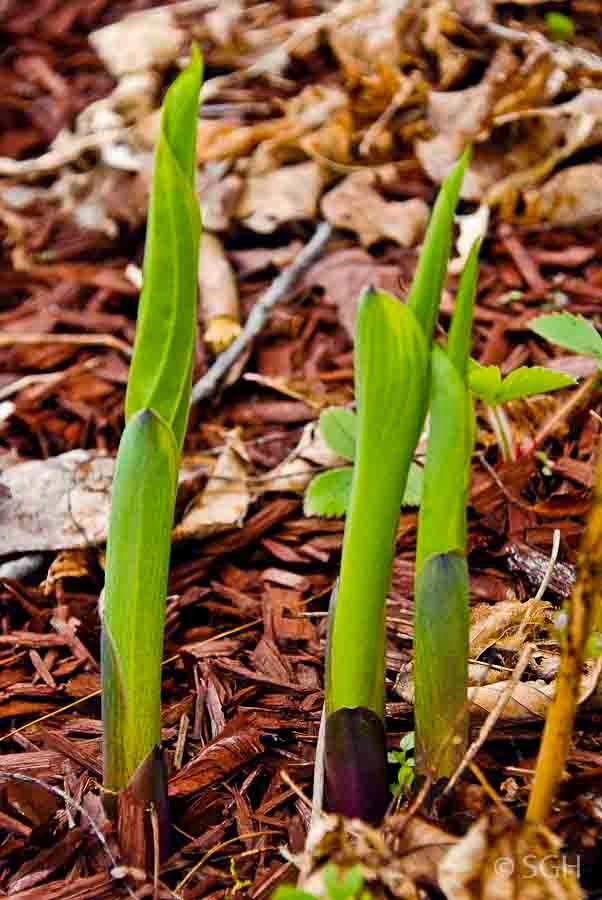 But the main part of our garden is yet to come, and I think it's the most beautiful part.  It's the hosta collection, planted all along an old stone fencerow.  But most of it is just spikes like these emerging from the ground still; it won't be at it's best til late June. 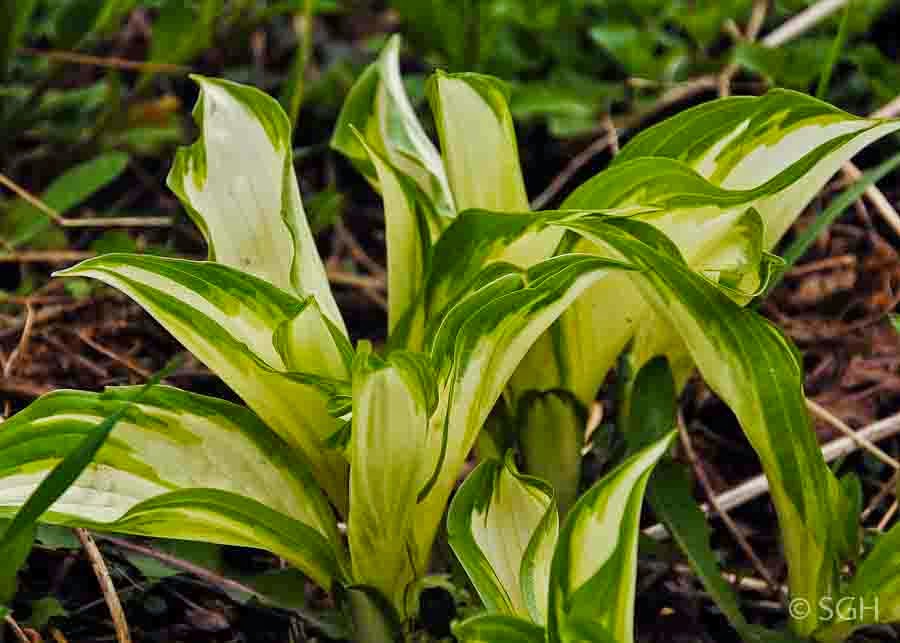 At the moment, this is about our most advanced hosta; none of them are out in leaf yet.  You'll just have to wait awhile to see the hosta collection. 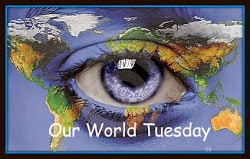