You've heard about our visit to Barrie, getting that button on the dashboard pushed and visiting the gigantic Bradford greenhouses, so you have heard the interesting part of this story.  But for this post you have to let me indulge my interest in the glacial landscape between Meaford and Barrie, which I have always found fascinating. 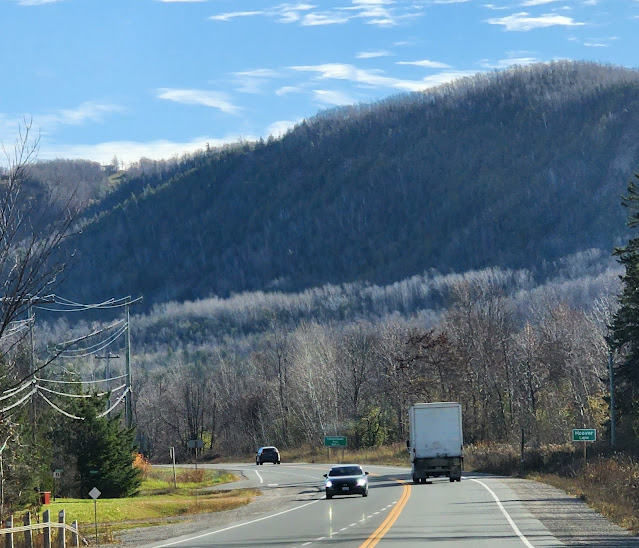 To understand the landscape, the physical geology that underlies this area, we start with Blue Mountain which you drive straight toward east of Thornbury, only 20 minutes from Meaford.

As you go round the curve you get the view that everyone thinks of as 'Blue Mountain' with the first of its ski runs.  You can probably make out a couple of the ski runs at the Peaks Ski Club, but let me tell you about the geology.  This and the land for some distance to the south is the highest part of the Niagara Escarpment largely because of the Algonquin Arch which runs to the northeast, deep underground, pushing the entire landscape higher.  This is why the slope is so high (and the ski runs so long).
Blue Mountain itself is composed of Queenston Shale, a very thick geological formation that erodes fairly easily into long gentle slopes, perfect for - you guessed it - downhill skiing.  That it remains this steep is due to the hard layer of Dolomite at the top, the Manitoulin Formation, that forms a cap rock, keeping the shale from eroding even further back.  If you were to hike the Bruce Trail, which circles the top of the mountain, you would find it almost completely a flat plateau.
The waves of the former post-glacial Lake Algonquin lapped at the bottom of Blue Mountain, and that former lakebed provides the flat land between the slopes and the bay where we are driving today.  We will meet Lake Algonquin again below, after we pass through Collingwood and Stayner. 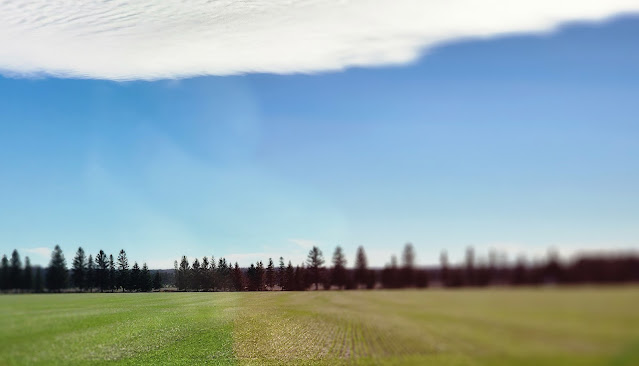 We have driven through Collingwood and Stayner now, but as we head further east, I am struck by how flat and level the landscape is, for this is a huge former bay of Lake Algonquin, and we are actually driving on the old lakebed, which here extends many kilometers inland from the sand dunes of Wasaga beach today. 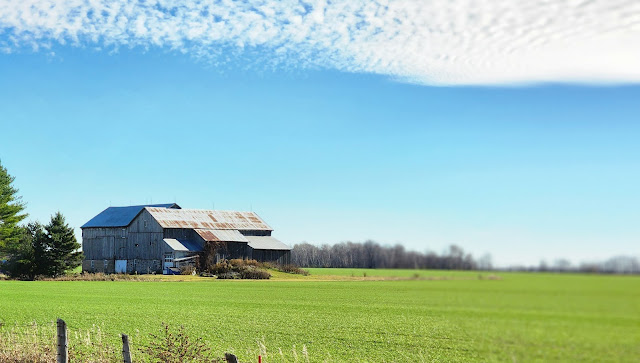 There are some interesting old barns, this one added to several times. 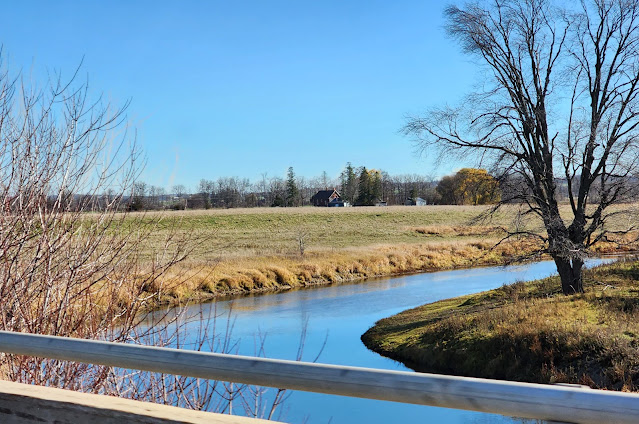 The Nottawsaga River drains through the huge Minesing Swamp in the middle of this area.  I once canoed this route, starting 25 miles south and pulling out just a short bit north of this bridge. 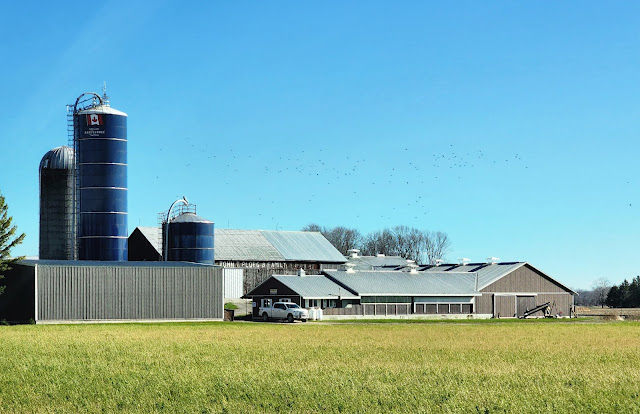 A few very modern farms too; this one was particularly impressive.

Farmers were active too on that sunny warm day, either harvesting the last of the corn, or as here, ploughing the fields after the harvest was complete.  We hardly ever see a mould-board plough any more, that actually turns the soil over, farmers use chisel ploughs like this one to loosen the surface but minimize erosion.
You do eventually come to the end of glacial Lake Algonquin, about the village of Minesing, but sorry, I did not get any pictures there.

Barrie is southeast of the ancient lakebed; on the way home though you are soon back down on the lakebed of post-glacial Lake Algonquin just west of Barrie, that same very flat landscape.

As you head north and west you can eventually see the shadow where the flat landscape will end, the Niagara Escarpment running south of Collingwood. 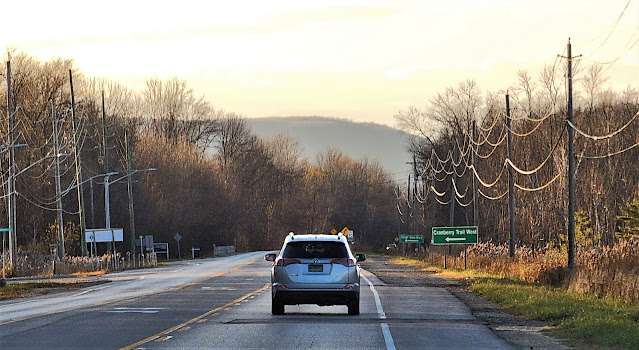 As you get closer coming west out of Collingwood, you are again driving straight into Blue Mountain where the post-glacial lakebed ends.  (I really just took this picture for the looping hydro wires).

After you pass Blue and drive through Thornbury, you get a very similar view, but this is not Blue Mountain at all, nor is it the Niagara Escarpment.  This is the bluff of the Blue Mountain Formation, carved into a steep slope by that same post-glacial Lake Algonquin.  I am sure it confuses many people driving  between Thornbury and Meaford (if they stop to think about it at all), but it is quite different geologically.  There is no dolomite layer on top of this huge slope.  Someday I will have to sort out the geology of the Meaford area and write about that.  Hope you enjoyed my geology tour!
Posted by The Furry Gnome at 2:00 PM