Join me on our 2014 trip to Iceland.  This was a totally spontaneous trip that we decided on over only a couple of days after seeing an ad on Travelzoo.  The attraction was the price, and the need to get out somewhere, anywhere(!) after a long Grey County winter!  It was only 4 days  plus two days for the flights, but it was a memorable adventure.

Iceland is an island in the north Atlantic, a separate country, though Nordic in traditions, with only about 350,000 people, most of them concentrated in the southwest around Reykjavik the capital.  The population is entirely spread around the coast, as original settlement was entirely by boat.  The centre of the island is upland, partly ice caps, and largely volcanic.  The lowlands are all around the coast, as you can see on this map.

But before I get to the details of our visit I just want to say a word about how well organized this whole trip was.  It was entirely booked through Icelandic Air, with one price for the whole package.  You could choose which tours you wanted from a long list, and once we saw the list we chose to stay two extra days to fit in more tours.

Each day we gathered in the hotel lobby by 9, and the different tours started stopping by.  A driver would come in and read off names, and off you went.  The vehicles ranged from full-size buses down to vans and jeeps.  It all operated so smoothly; somebody had obviously done a great deal of coordinating behind the scenes.

And yes, Iceland has a reputation for being expensive, but there is a short 'in-between season' in late April where travel is much cheaper.  In fact this was advertised as being half-price.  I kept watching for some extra costs to show up, but they never did.  Everything except our evening meals out was covered - two flights, 6 nights posh accommodation, and all the tours - for about $3000.00 for the two of us.

With that introduction, let's move on to our first tour.  It was the 'Golden Circle', a day-long tour that took in the three most popular sites in Iceland, and the Pingvallir was the first of these. 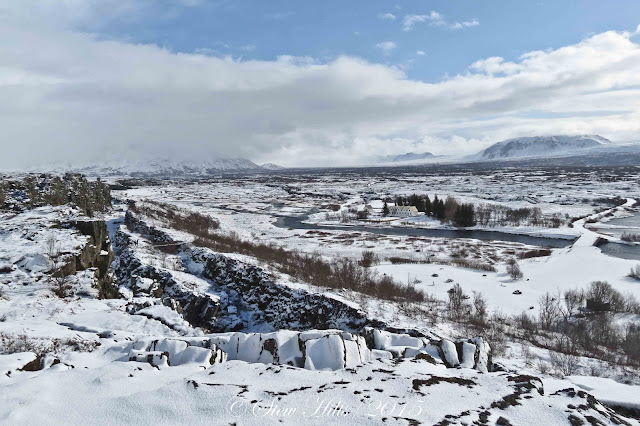 Iceland is the only place on earth where the Mid-Atlantic Ridge is above water so you can see it.  If you have read any geology, you'll know the idea that the planet consists of continental plates, that 'float' on the underlying mantle.  Continents are slowly (very slowly) moving apart or together, depending on where you are in the world.  Along the Mid-Atlantic Ridge the North American and European plates are moving apart.
The picture above, taken after we got off our bus at Pingvallir, shows the cracked western edge of the rift valley on Iceland.  Our walk went down through that rock canyon and out at the bottom, where the ancient 'parliament', the Pingvallir, used to meet.  Iceland's version of a democratic parliament arose in the 900s, so it's about 900 years older than ours in North America.   This is an important historic as well as a geological site and a UNESCO World Heritage Site. 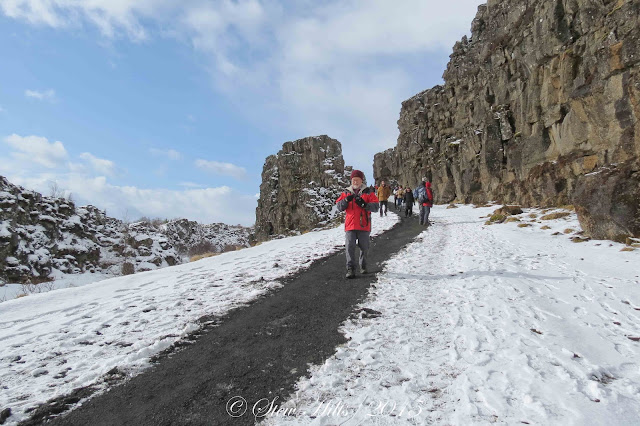 The pathway down between the cliffs was a paved easy trail.  Believe it or not, the Icelandic parliament , the 'Alping', started here in A.D. 930, over 1000 years ago.  This pathway would have been a well-used entry to the site for all that time. 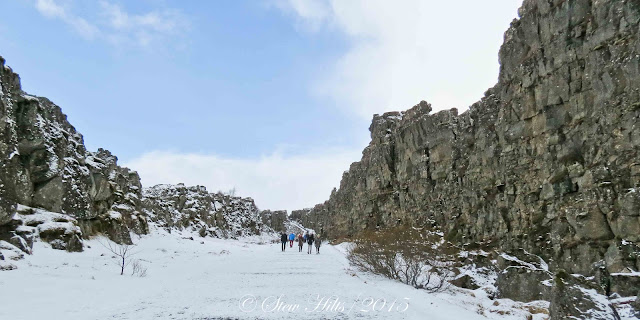 There were a fair number of visitors, but it wasn't crowded. 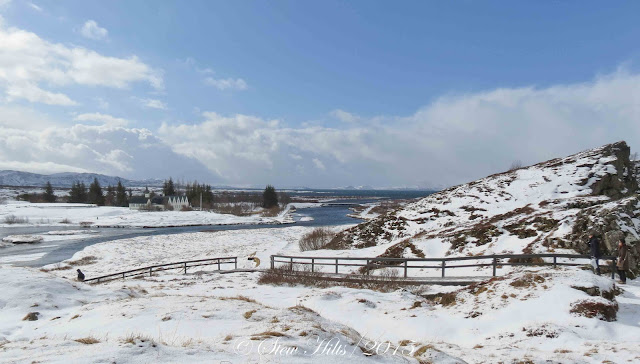 At the bottom you came out into the edge of the broad flat rift valley that runs through Iceland. 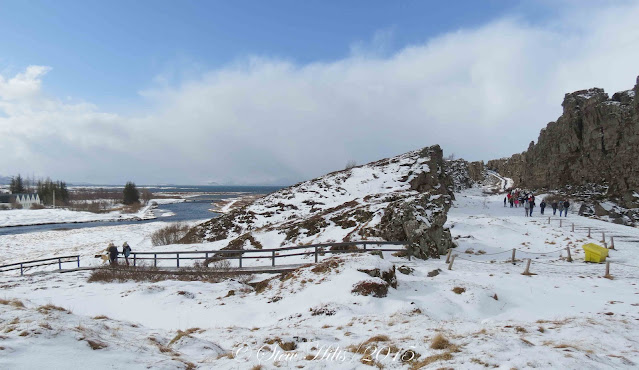 The open area on the right hand side of this photo was the site of the Alping.  Until 930 Iceland consisted of separate villages around the coast, the first Norwegian settler having arrived in 874.  But there was no agreed upon legal framework for the island as a whole.  Settlers in the south-west corner of the island took the lead and the Alping started.  That lasted until 1262, after which Norwegian and later Danish rule began.  In 1918 Iceland gained its independence again.
People attending the annual gathering would set up temporary shelters, and the area has been described as looking like a medieval bazaar for two weeks.  Iceland thus claims to have the world's oldest functioning parliament.

Once you've arrived at the river in the valley you can look back and effectively see the eastern side of the North American tectonic plate.  A fascinating place for geologists!  Earthquakes are detected almost very day under the rift valley. 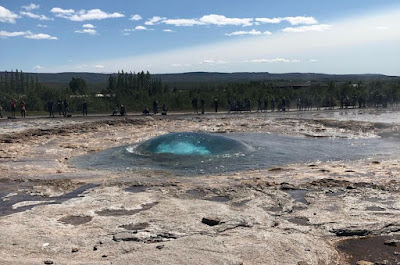 In the next post we'll visit Geysir, the original geyser, and Gulfoss, the largest waterfall in Europe by volume.  See you then!
Posted by The Furry Gnome at 12:03 PM