On Sunday we took off for a long drive through the countryside.  Wanting something different this time we drove west around Owen Sound and north to the village of Kemble.  We're missing their maple syrup festival which has now been cancelled two years in a row. 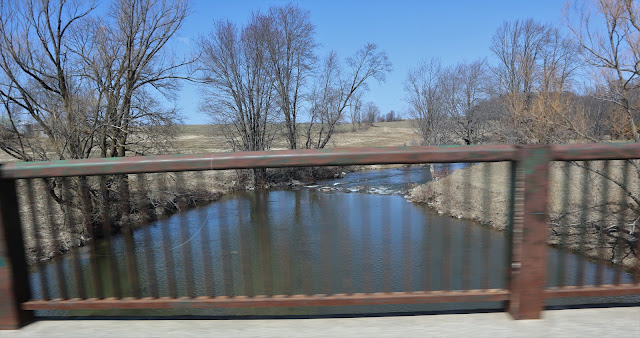 This is the second crossing, a couple of concessions west.  I once joined a canoe/kayak group putting in here and floating downstream for several miles in early April.  Obviously the water was higher that year; we could easily float across that line of stones across the river.

It's not uncommon around here to find curves in roads like this, going around hills rather than over them, although this curve was rebuilt a few years back so you don't even have to slow down anymore.  But there are still lots of roads that don't go through at all, either because of large wetlands or the Niagara Escarpment. 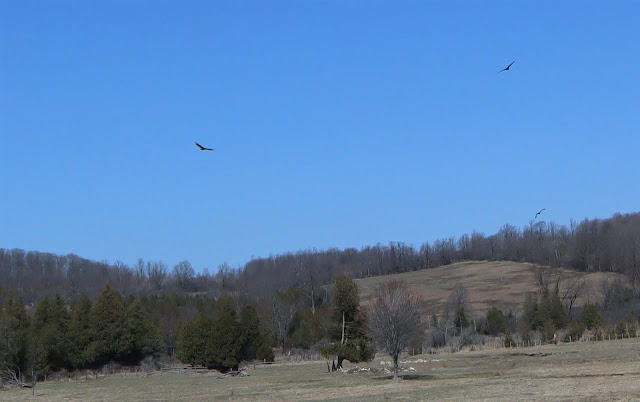 It's a rolling agricultural landscape, often half forested, a lot of it just used for pasture (or not used at all anymore). but the point of the picture is the three Turkey Vultures.  Uncommon 20 years ago, they've become one of our most common birds; there's often one in sight, soaring overhead hardly ever flapping their huge wings.  They have nearly a 6 foot wingspan held in a very shallow 'V', unlike large hawks which hold their wings flat.

These fences reflect both a well-off landowner, and cattle, the most common farm use around here, almost always beef cattle.

I'm always struck by this farm as we drive by, high on the slope of a drumlin with little around it.  Looks pretty exposed to the winter winds to me.

And here is another.  We've actually been into this farm.  He used to make the most ornate fancy birdhouses, like Disney castles.  These fields are smooth enough for copping, almost the only crop fields on this road all the way to Owen Sound, though it's a pretty steep slope.  They're probably rented out now. 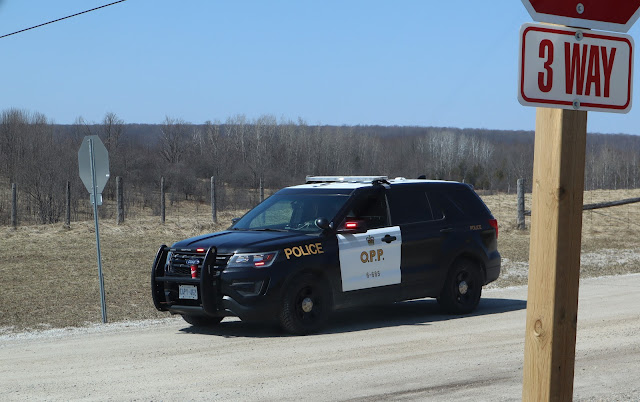 We saw the flashing lights first and we thought it was an accident.  It's a bad corner.  But it was just a 'ride check'.  I couldn't believe people would be drinking in the middle of Easter Sunday afternoon!  Maybe they were after those folks who feel a bottle of wine with dinner is fine.