I'll bet most of you have never even seen a Brown Creeper or know what it is, though it's more common than you'd think.  It's perfectly camouflaged you see, and terribly hard to pick out when it's poking its way up a tree trunk, which is where you're most likely to see it.  But I'll bring you up-to-date on our other bird observations too, which have actually been remarkably few. 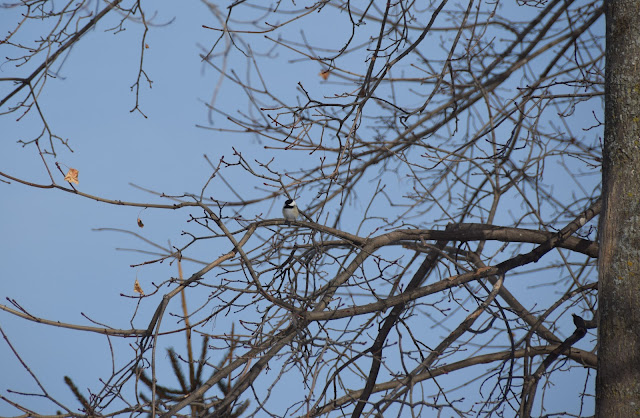 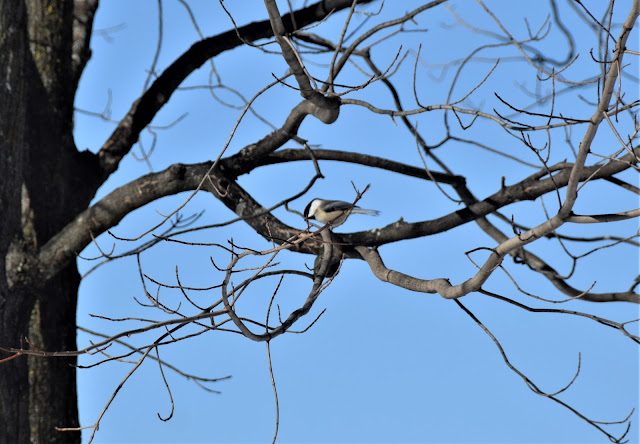 Our little flock of Chickadees are our most common visitors, and they're still passing through briefly several times a day.  I have lots of pictures of them at the feeders, but less often sitting in their natural habitat - a tree!  They will disappear for nesting in the woods soon. 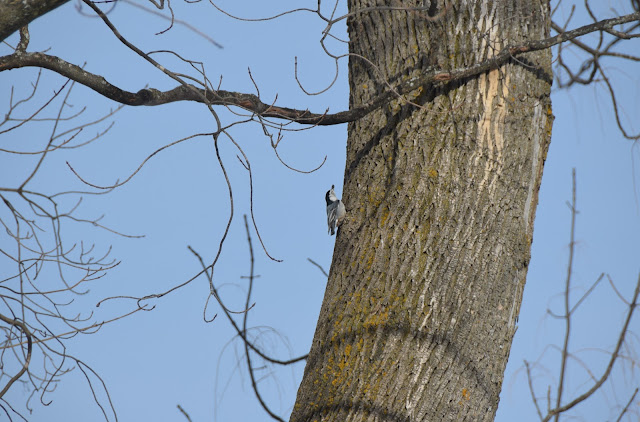 The White-breasted Nuthatch is usually with them, but it's very hard to get a good picture, it moves so fast. 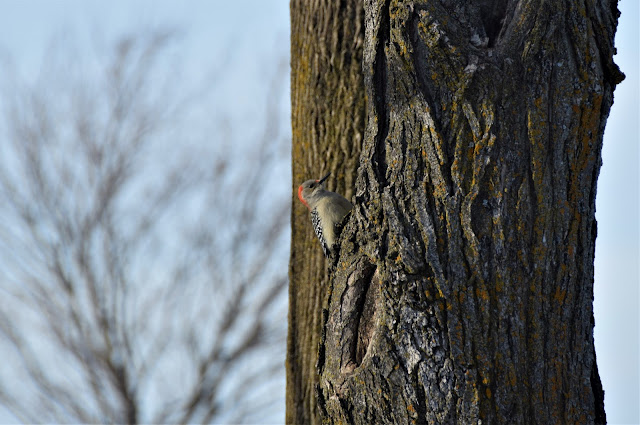 Occasionally we see a Downy Woodpecker or a Red-bellied Woodpecker like this one. 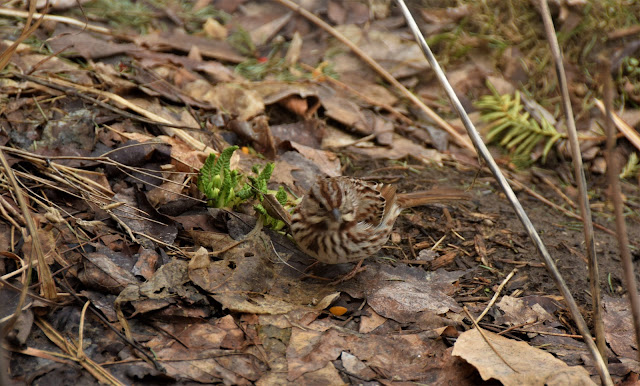 And last week a Song Sparrow arrived back.  Perhaps our most common sparrow, I know it for its easy-to-recognize melodious song, which it typically sings from the top of a shrub all day long in warmer weather.  You can see it has two dark cheek patches, and a dark spot on its breast. 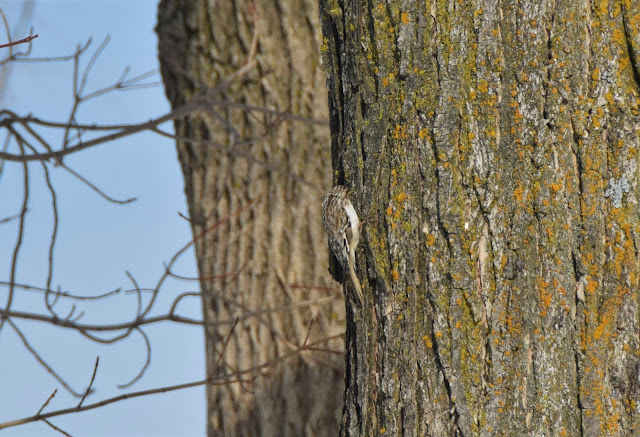 And this is the Brown Creeper.  I picked the photo which I thought was easiest to see against the very similarly coloured bark to show you first.  This is heavily cropped, but taken with my Nikon rather than my iphone. 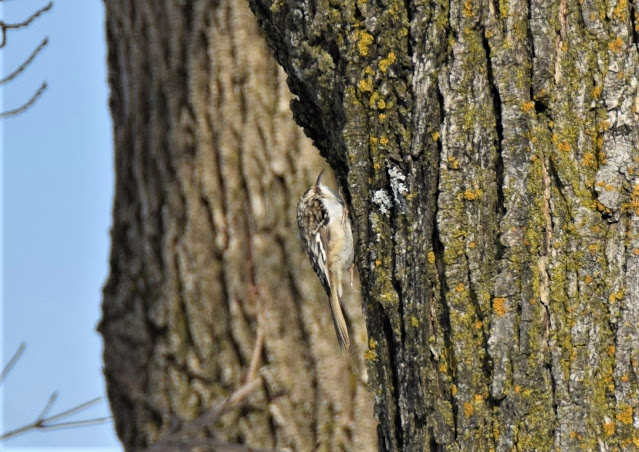 I've cropped it even more here to show you the downward pointing bill which it uses to dig tiny bugs out of the bark.  This bird can almost be identified by its behaviour, as it hitches its way up the tree in short hops, probing into the bark crevices as it goes. 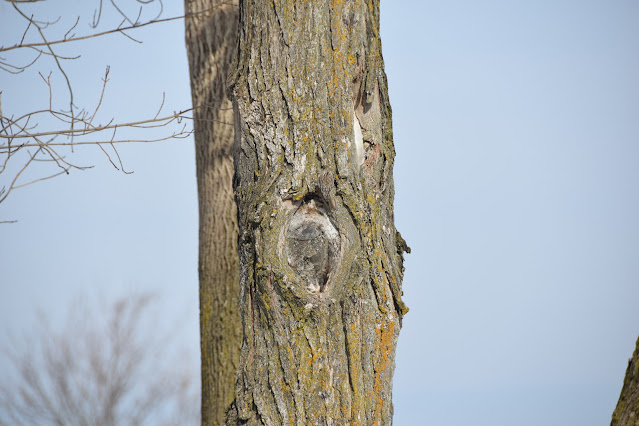 So now that you know what it looks like, can you find it on this original photo? 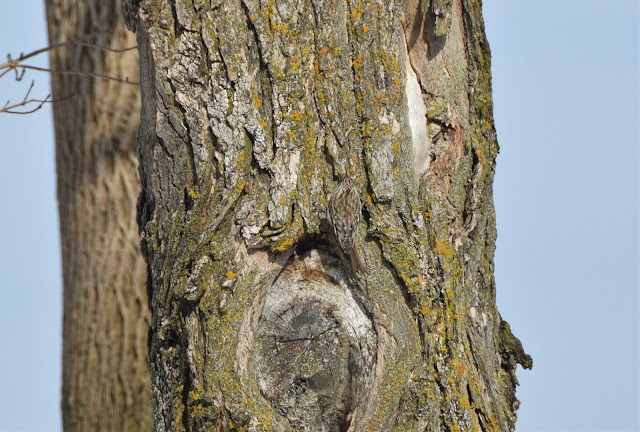 This cropping should help you.  Brown Creepers are not terribly rare, though I've only seen one once or twice before in my life.  But they sure are hard to spot. 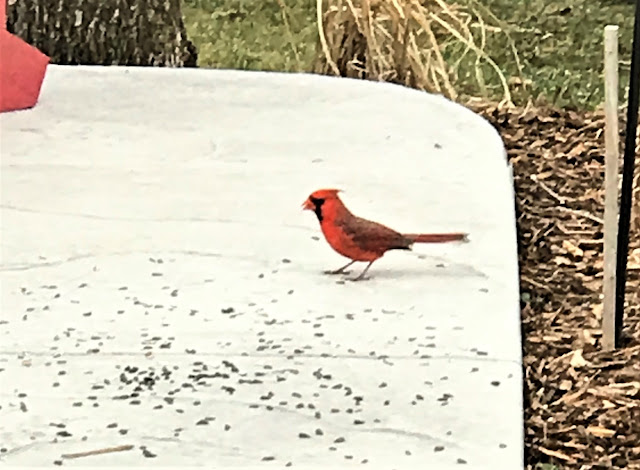 To end on a more colourful note, here's a Cardinal that only visited once, but soon I'll be hearing it calling from the tops of trees on my rides.