In the last post I tried to outline the complexity of modern international shipping from the local point of view - that is, you buying your new exercise bike at your local store.  But there are some global patterns involved here, as well as a pandemic that has caused so much chaos in society.  I realize this won't interest many of you, so I'm really writing this just for myself.

To begin with the global container shipping industry has grown faster than the rest of the system. There aren't enough containers to go around, and there are more enormous container ships than there are ports which can handle them.  Both the biggest ports and the factories that manufacture containers are in China.  The biggest ships can totally overwhelm the smaller terminals, leaving other ships offshore, waiting their turn to unload. 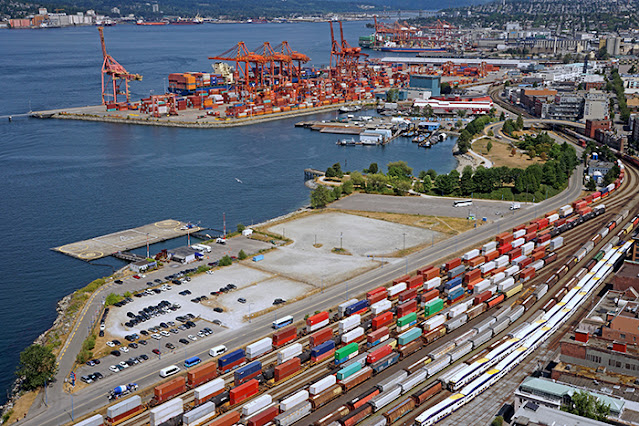 One of the Vancouver container terminals (another in the background).

Then along came the pandemic.  Shipping dropped suddenly as business slowed, then it recovered, taking personal protective equipment to poorer countries in Africa, where those containers are often still sitting, empty, because there's no profitable reason to go back and pick them up.  As the pandemic unfolded, consumers started buying exercise bikes, treadmills, laptops and ipads, anything they could get to make a stuck-at-home life better, all usually produced in Asia someplace.  Shipping to Europe and North America particularly to the U.S. skyrocketed unexpectedly.

But the trip bringing those consumer goods to the U.S. was much more profitable than taking bulk goods like soybeans back to China.  So containers in Asia were in high demand and empty containers were left on the west coast because ships didn't want to wait for a low value cargo like soybeans from Chicago or Kansas to be loaded.

The cost of shipping went up accordingly.  Containers that cost $1000.00 to ship last June cost $4500.00 last month!  Shipping companies have made terrific profits and retailers absorbed huge losses along the way.

It strikes me as supremely ironic that those clothing companies that outsourced clothing manufacturing to Asia over the past three decades in order to make better profits are now complaining about the cost of importing that clothing back into the country!  And the workers are still making the pittance of a wage they get paid. 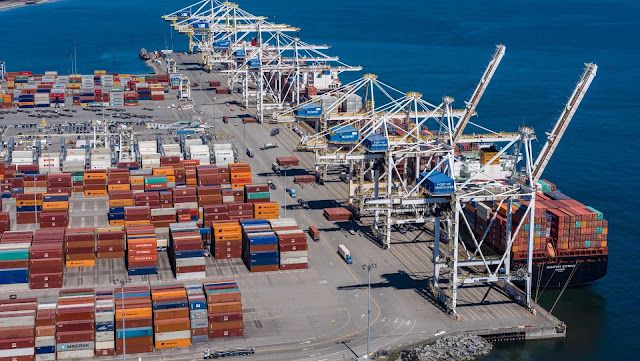 The container port at Delta, south of Vancouver.

The global shipping pattern is heavily skewed by the most profitable route, that from China to the west cost of the U.S., particularly the Los Angeles area container terminals.  Among western countries, the U.S. has the largest trade deficit, and it's huge.  The U.S. imports far more in consumer products than it exports.  While the EU, the U.K., Canada and Japan's trade balances all go up and down by a few billion, and are frequently positive, the U.S. trade deficit is over $700 billion.

I was interested to see that the trade balance between the U.S. and Canada is typically positive in Canada's favour, but interestingly we tend to trade the same things to each other, thanks to our integrated manufacturing sectors - vehicle, machinery, energy products and plastics.

I should also point out that the great Lakes ships I've occasionally posted pictures of are all bulk carriers, ships that carry products like coal, grain, iron ore and salt loaded directly into the holds of those ships.  Although there have been container ships on the Great Lakes, the limited size of the St. Lawrence Seaway and the Welland Canal has made it uneconomic.

Sorry if this post hasn't interested you in the least, but I found it fascinating to delve into this, partly perhaps because our daughter works in this field.  I'll be able to have a more interesting conversation with her now.

Meanwhile, here in Meaford it snowed for April Fools Day, and  we're moving back into a 4 week lockdown  - I think I've had enough!