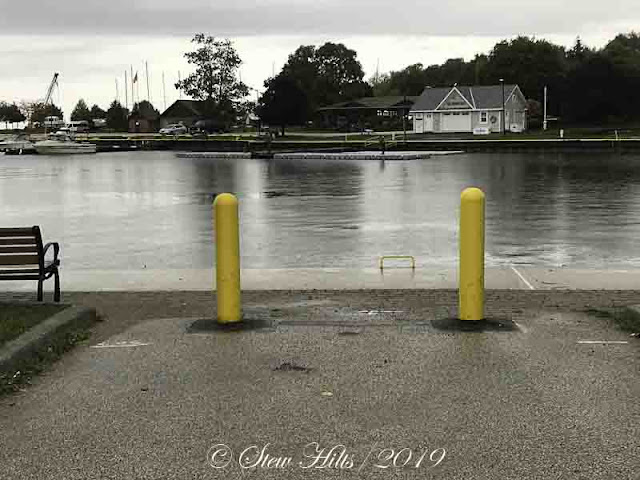 There's a background story to this.  Last July, wanting to go down to our local museum, I rode down the sidewalk from the main downtown corner one block to the harbour.  I only had to go one block west to get to the museum.  Straight ahead of me was a parking space on the opposite side of the street.

I road across the street only to find my way blocked by a cement curb placed to stop cars.  I looked up and down the street, and all the parking spots were blocked by curbs, all just close enough together to stop a wheelchair going through.  I had to drive down the street behind several parked cars to get to the museum.  Anyone knows that driving behind parked cars is a less than safe thing to do in a wheelchair.

So when I got home that day I called the town hall and asked for the Accessibility Coordinator.  She was on maternity leave, but I talked to her substitute and requested that they fix this situation.  I pointed out that they could easily do so by simply moving the concrete curb about six inches.  I didn't expect much action, but I remained hopeful.

But lo and behold yesterday we were driving by and they had fixed it!  They removed the concrete curb entirely and replaced it with the two bright yellow bollards you see in the photo - wide enough apart to easily get a wheelchair through, but certainly enough to stop a care rolling across the sidewalk and into the drink!