I cancelled our photography group outing to Old Baldy when a heavy downpour came over an hour beforehand.  But once the rain had passed I told the group I'd be there in case anyone showed up, and one person did.  By then the rain had long gone, so we enjoyed a nice walk out to the cliff, and two more members of the group caught up to us a little later.  The view was spectacular! 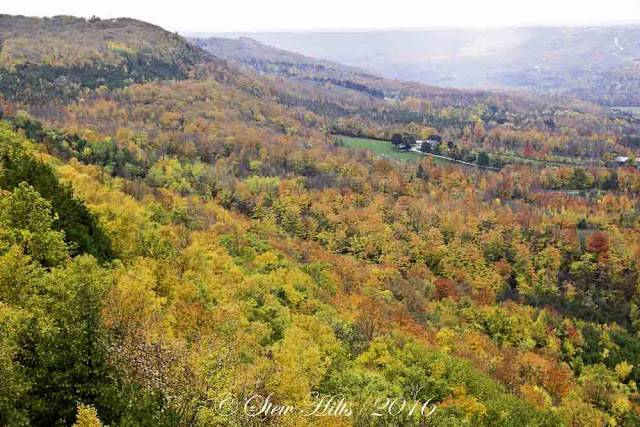 I think this was the best fall colour I've ever seen from the cliffs of Old Baldy.  It was a bit hazy in the distance, but the bright Sugar Maples were everywhere. 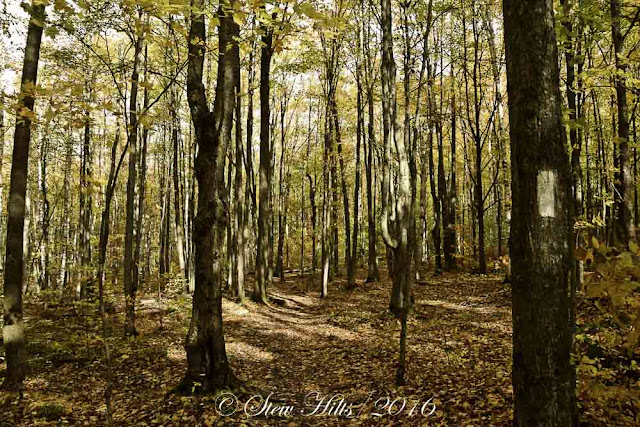 We started in on the Bruce Trail, and initially when we stepped into the woods the atmosphere was all yellow.  The golden canopy filled the atmosphere with a gentle glow. 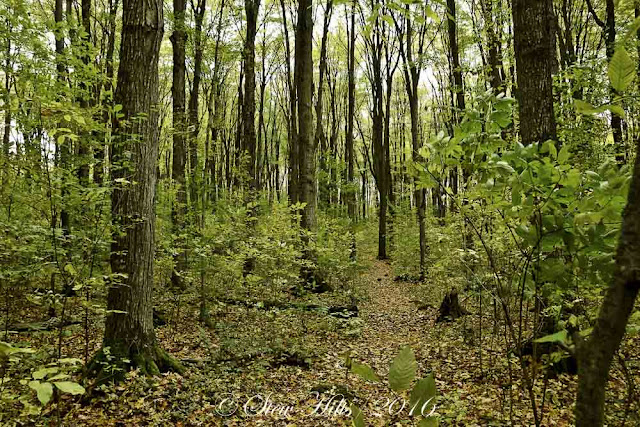 But as we proceeded down the trail, the woods turned green again.  The edges of the woods had turned mostly yellow, but the interior was still mostly green. 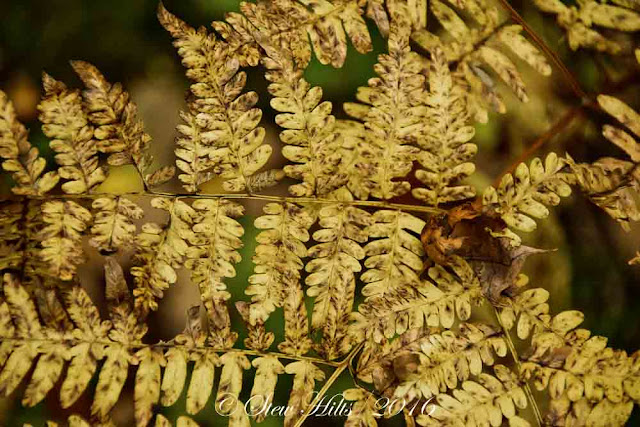 Lots of plants on the ground, including these now frosted Bracken Ferns as we got close to the cliff. 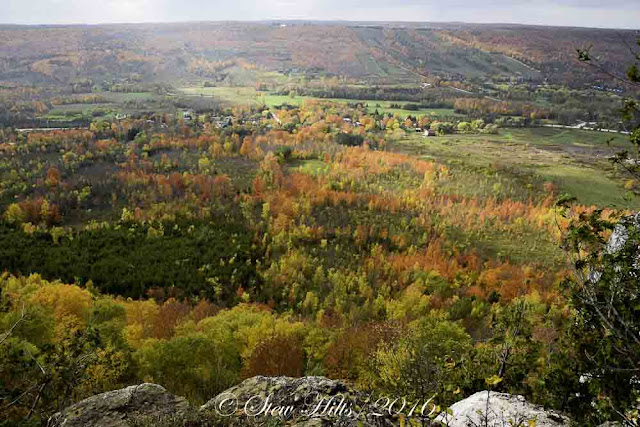 And then we emerged at the first viewpoint, and had a look over the valley.  The village of Kimberley is in the centre of the picture, the old slopes of Talisman on the upper right. 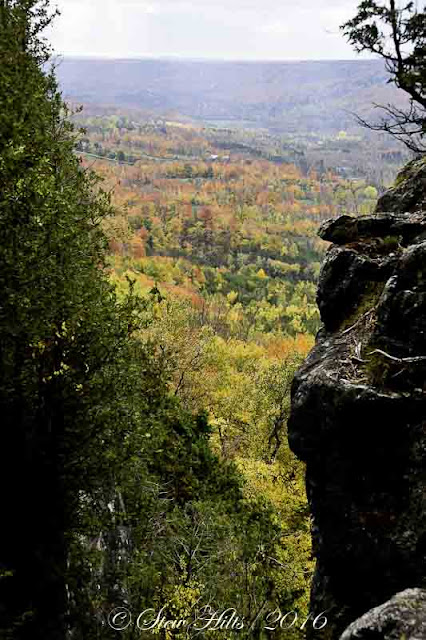 To get a view down to the south of the valley, you have to cross some jumbled rocks out to a 'flowerpot' of limestone, the most visible tall cliffs in the area.  You get a neat view through the big 'V' of rock, but I've had quite a few people who were too nervous to follow me here. 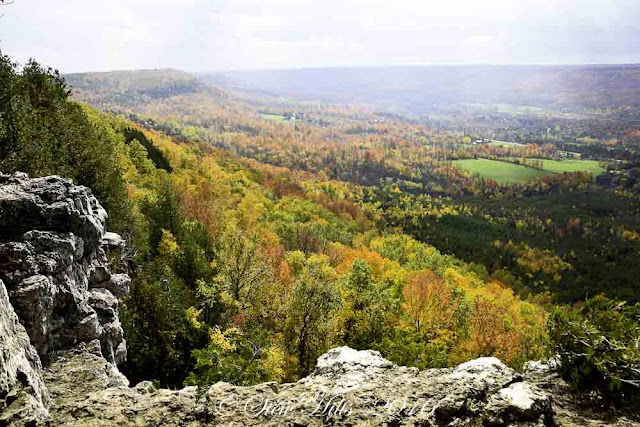 No problem today; we got out to the top of the open flowerpot and enjoyed the spectacular view south down the valley.  We live above the valley on the upper right of the horizon.  There is far more forest cover in the valley than there was 50 years ago, but a few bright green fields mark where farmers still harvest hay. 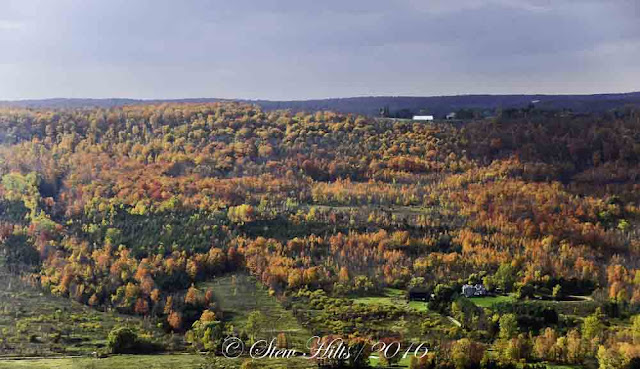 The sun was coming and going (mostly going), but we got a few pictures with the trees lit by the afternoon sun. 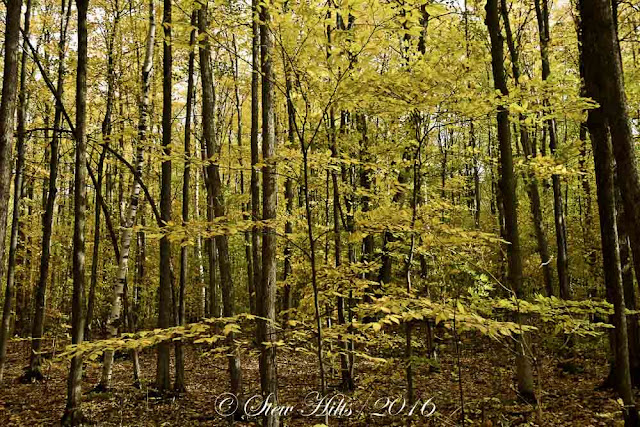 Then we headed back down the trail through the now very yellow woods. 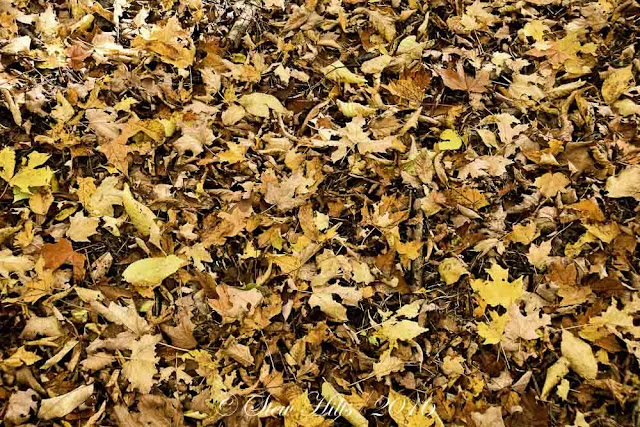 With the crunching leaves underfoot.

From a downpour an hour earlier, it turned into a memorable view of the valley, well worth the walk.