First let me expand the question to ask about national holidays in other countries, like Independence Day, July 4th, in the U.S. too - I actually get more American readers than Canadian.  I know what our most memorable Canada Day experience was, but first let me share two of my favourite Canada flag pictures from here or nearby.  And Happy Canada Day! 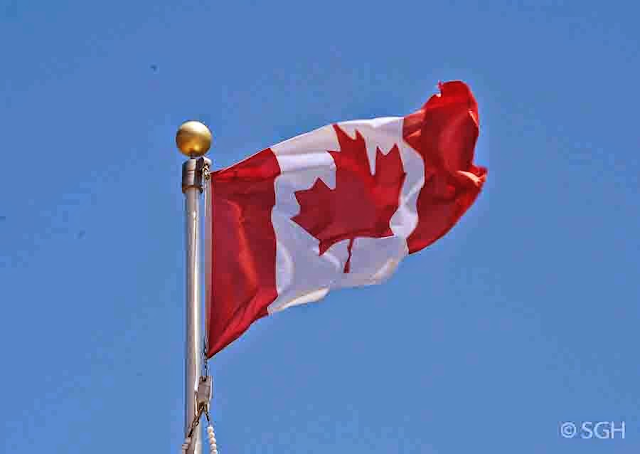 The flag at the end of the pier in Big Bay, up nearer Wiarton, flies from a tall flagpole, and was blowing in the breeze when we were there several years ago.

In the countryside southwest of Meaford is this enormous Canadian flag painted on a barn roof, my favourite display of patriotism!
Our best experience of Canada Day was in 1986.  It was British Columbia's centennial and our first camping trip west with the kids, then 2, 6 and 9.  We were camped in Kicking Horse Pass in Yoho National Park in the Rockies when July 1st arrived, so we went in to the nearby tiny village of Field for their fireworks display.  Built originally to serve the railway workers, my grandad has been the local minister here for a few years about the turn of the 19th century.
Field is nestled at the base of 4 mountains, Mount Field, Mount Burgess (site of the famous Burgess shale fossil field), Mount Stephen, and Mount Wapta.  So you are very much down in a deep valley with just space for the railway, the highway, the Kicking Horse River, and the village.   Here's one view of the scenery to give you an idea (not my picture) 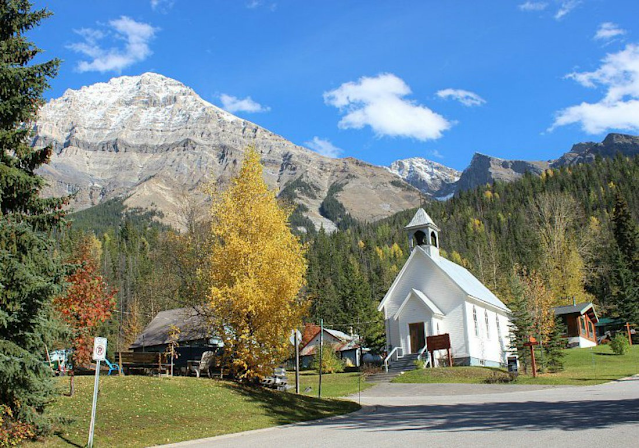 So guess what fireworks sound like down in a valley surrounded by mountains!  And these were not just for Canada Day, but for the B.C. centennial as well.  They were LOUD and spectacular, the most spectacular fireworks display I have ever seen anywhere!  The kids were both thrilled and terrified.  I remember our daughter, the 2 year old, putting here hands over her ears.  And that's my best memory of Canada Day.
Posted by The Furry Gnome at 3:08 PM