The other day I posted some pictures of stained glass windows from the Anglican church.  I wasn't even aware of anything special, but I know now they'd be worth another visit.  Al Bossence was right when he said the third window was different, showing kings and queens rather than religious figures. 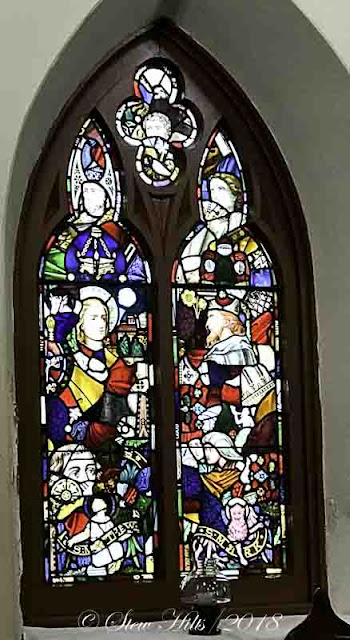 This is the window in question, not the usual religious painting, but apparently made up of fragments.  I don't know if they're kings and queens, but they are probably knights, landowners and crusaders if not.

After my visit I looked up 'Meaford Stained Glass Windows' and learned more.  Rev. Appleyard. Rector of this church, served overseas during WWII as an army chaplain.  On his travels across southern England he noticed fragments of broken stained glass around the churches and cathedrals.  He gathered larger fragments and got permission from the churches to use them to create new windows, which he brought to North America as a memorial to Canadian soldiers who served in the war.

There are four such windows, obviously a good reason for another visit and another blog post.  Hope you're having a good Christmas!