Apple Orchard in the Valley

Today's orchard is a small orchard belonging to a friend, so we get to go and pick apples ourselves every fall if we want.  He stopped by the other day to say that the first of his varieties, the Melbas, were ready for picking, so we dropped by on a perfect sunny afternoon to pick just a few for making applesauce. 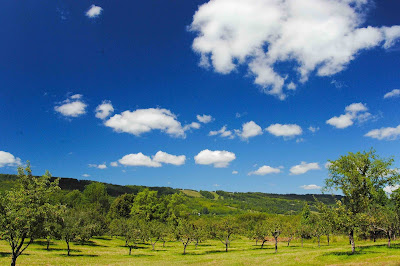 As you can see, it really was a perfect afternoon.  We've been getting lots of these brilliant blue-sky days with puffy white cumulus clouds, as the high pressure weather systems roll through, even though it hasn't been very hot.  Perfect weather for me!  His tiny orchard is in the narrower upper valley; you can see the west slope of the valley in the background.  The cleared fields in the distant centre are the ski runs of the abandoned Talisman Ski Resort. 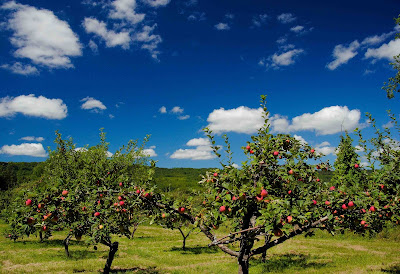 We quickly found the five Melba trees, easily identified by the apples turning red.  He has about 8 varieties of trees that ripen over the next two months, so we may be back later to pick some others.  But now was a convenient time to make applesauce, and melbas are good for that, as they don't really keep well for eating over the winter.  They're an older variety, and great eating early in the season. 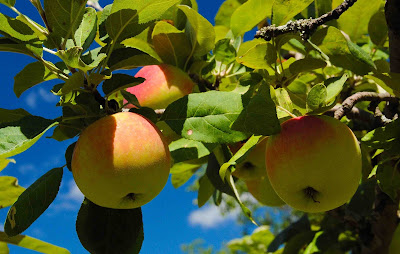 Almost the entire crop in this region was killed off by a late April frost last year, so this year's crop looks bountiful indeed.  These trees were heavily laden with lots of excellent apples.  They're mostly small trees, and easy to pick, so we half-filled 4 shopping bags and headed home. We now have 24 jars of apple sauce all ready for the pork chops in mid-winter. 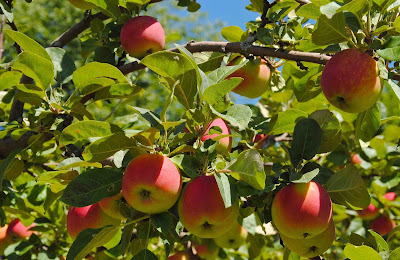 I've been in this orchard many times over the years, sometimes with a group of students we brought to the valley, who helped pick occasionally in return for taking their own bags of apples home.  But once I was accused of being an apple thief by a local who called the police after he saw my car parked along the road!  He didn't realize that I was actually in the orchard with the owner, helping him pick at the time.

Given the beautiful sky,
I linked this post to: