For several years I've been intrigued with the very flat line of rocks that you see in front of you on the east side of the Beaver Valley when you drive down Bowle's Hill. It extends north and south of the power plant with it's well known towers, forming a flat geological layer about one-third of the way down the slope. In this picture, taken half-way down Bowle's Hill, you can easily see the perfectly flat line of the rocks. You can see that the power plant flumes actually bend at this point in the slope as they descend over a short cliff - but this is not the thick limestone caprock that forms the top of the Niagara Escarpment. 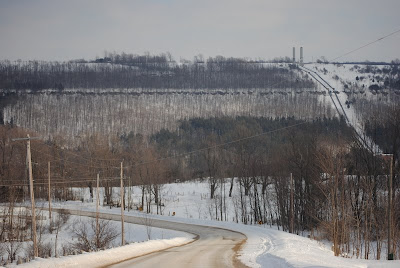 After reading all I could find out, I've learned that this is the Manitoulin Formation, a layer of limestone rocks that creates a short secondary cliff in this part of the larger Niagara Escarpment. The next picture below illustrates this limestone layer up close, as it appears at the top of a waterfall further south on the west side of the valley. 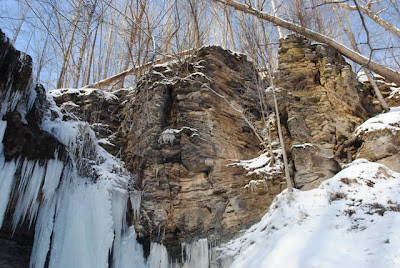 You can see that this formation is composed of thin bands of limestone, in contrast to the huge thick blocky rocks of the Old Baldy cliffs, shown below. The Manitoulin Formation limestones are strong enough to form a short cliff, but not nearly as strong as the Amabel or Lockport Formation which forms Old Baldy. 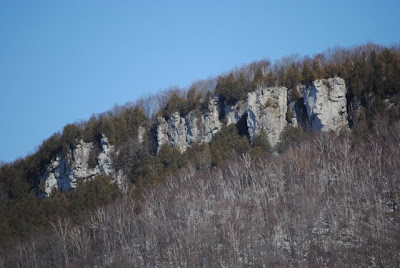 The origins of the two formations are very different as well. The Manitoulin Formation was formed as part of a huge delta, laid down across southern Ontario by rivers flowing west from the Taconic Mountains, the original Appalachians, once as high as today's Himalayas. This is why it appears as a flat line on the escarpment slope. The cliffs of Old Baldy, in contrast, were formed as coral reefs around the outer edge of the Michigan Basin some 400 million years ago. Later infused by magnesium-rich water, and hardened into rock, they are in effect one huge thick layer, forming the cap-rock of the Niagara Escarpment. They also vary in height, because the coral reefs were of course thicker and higher in some places than others. 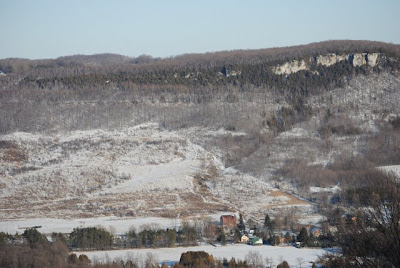 In this last picture you can see both the cliffs of Old Baldy and the flat line of the Manitoulin Formation, slightly below and to the left of the open cliffs, about one-quarter of the way down the slope. You have to look carefully to pick it out, extending to the left, but disappearing beneath the talus slopes below Old Baldy on the right. The whiter area below is not a geological formation, but a former farm field, not yet much grown up in trees.

The Manitoulin Formation in effect forms a double escarpment, a set of smaller cliffs lower down the slope than the big caprock cliffs. So if you're driving down Bowle's Hill, watch the east slope in front of you for the Beaver Valley's double escarpment.
Posted by The Furry Gnome at 8:56 PM