To understand the seconday escarpment formed by the Manitoulin Formation, you need to understand the layers in between. At the top of the sequence are the thick layers of Amabel or Lockport dolomite that form the main cliffs of the Niagara Escarpment, especially up the Bruce Peninsula (not visible in this picture). Below this, after a few narrow bands collectively known as the Clinton Formation, is the Cabot Head Formation. In this picture, it forms the relatively gentler slope below the hydro towers, but above the short Manitoulin cliff. It is mainly composed of shale, which is relatively soft and therefore erodes to form a slope rather than a vertical cliff. 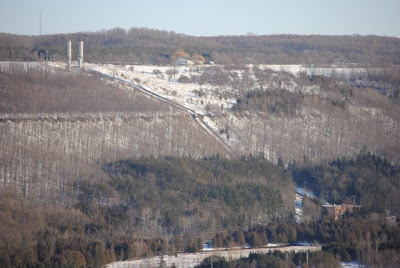 The Manitoulin Formation below it is limestone, which is much harder, and therefore does form the short cliff in the middle of the slope. Together, the Cabot Head and Manitoulin Formations are sometimes known as the Cataract Formations. Below this is the long steep slope of the Queenston Formation, another shale. Because it erodes steadily, and is a very thick formation, it always forms a long slope below the escarpment cliffs. It is made up of the red and sometimes bluish clay that is occasionally exposed in roadcuts or at the base of waterfalls. 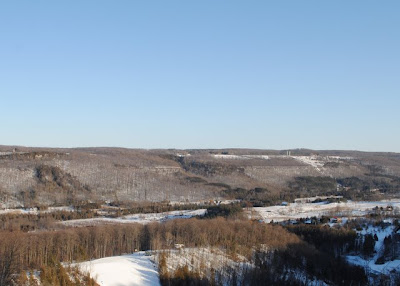 So the entire escarpment is made up of hard, soft, hard and soft layers in a sequence; this accounts for the Beaver Valley's double escarpment. You can see this whole sequence in this picture, with an outcropping of the upper Amabel cliffs in the far left of the picture, the short Cabot Head slope below this, the flat line of the Manitoulin Formation across the centre of the photo, and the long steep slope of Queenston shale below that, right down to the river. 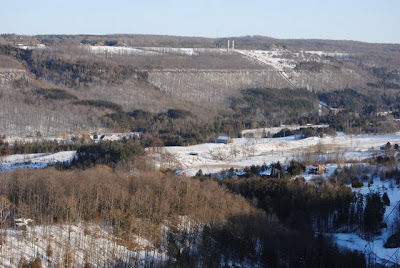 You don't often actually see the Manitoulin cliff when hiking the Bruce Trail, because if it is exposed, you are likely walking on top of it. For the entire stretch shown in this picture above, south and north of the hydro towers, the trail follows right along the top of the Manitoulin Formation.

You can also see the Manitoulin Formation easily in Owen Sound, if you drive west on 10th Street from the downtown. A few blocks west of the river, you drive up a hill through a rock-cut; this is the Manitoulin Formation. After driving west through the 'sunset strip', you come to a second cliff, where the Bruce Trail crosses. This is the higher level, the Amabel or Lockport dolomite cliff.