Where are the Monarchs?

I thought I had finally seen a monarch butterfly this summer when I spotted this bright orange and black butterfly near the Beaver River in Clarksburg.  Managed a few pictures of it, mostly hidden behind the Joy-Pye-Weed.  But alas, when I got it home and enlarged it a bit, it's a viceroy, not a monarch - nothing against the viceroys, but where are the monarchs?! 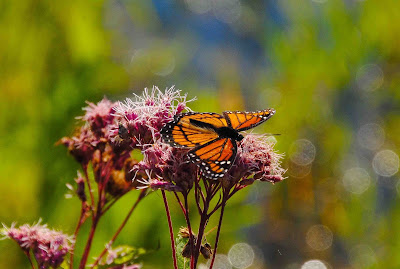 You can identify this as a viceroy by the black line in the middle of the hind wings, which is absent in the monarch.  Citizens and scientists all across the mid-west and eastern Canada are concerned about the dramatic drop in the monarch population this year.  One report indicated 90% fewer monarchs than last year! 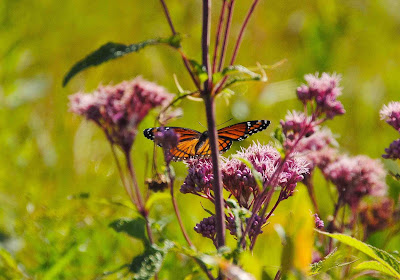 Reports put the decline down to the severe drought in the mid-west last year, to the cold wet spring in eastern Canada this year, and to the increasing use of round-up and neonictinide pesticides on fields of corn which used to allow for weeds like milkweed along the edge - but no more, with widespread 'clean' farming.

You can watch the progress of the monarch migration on the website 'Monarch Butterfly Journey North', a citizen science website where you can submit your own observations.  It even has maps that show the pattern of the migration.  Could we be seeing the beginning of the end of the monarch butterfly? 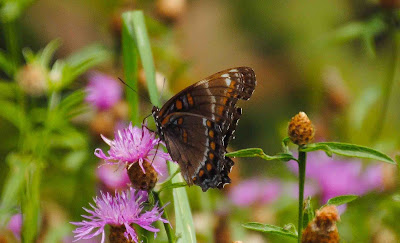 This is another butterfly I've seen this summer, one I didn't know before, the Red-Spotted Purple sub-species of the White Admiral.  It looks like a totally different species to me, with the blue on the wings, but the guide says the two are just sub-species.  In fact, this one does look like it's half-way in between based on the book I have, with a bit of a white band through both the upper and lower surface of the fore-wing. 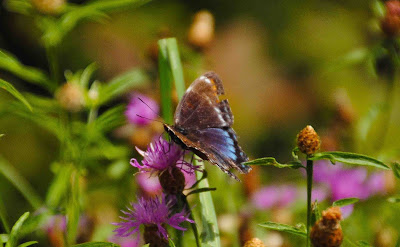 Summer's over now, and early fall is here, but it will be a sad summer to remember if it turns out to be the start of the loss of the amazing monarch butterfly.  No other species that we know of migrates the 4000 km the monarch does, over 3-4 generations of butterflies - how does the future generation know to go back to Mexico when it's never been there!!??
Posted by The Furry Gnome at 8:41 PM